The [Disney_Magic] has been selected by Turner Classic Movies to host the third TCM Classic Cruise December 8-12, 2013.  This year’s cruise will include movie screenings, seeing the actors and talent who made them, hearing stories from behind the scenes, enjoying special panels and sharing it all with other passionate movie fans.  With multiple TCM-themed daily events and activities, guests are bound to make new friends as you savor this unique vacation experience. It’s classic movie paradise at sea.

TCM host, Robert Osborne announced the third TCM Classic Cruise will embark from Miami aboard the reimagined Disney Magic during his closing remarks of the 2013 TCM Classic Film Festival on April 28th.  The Disney Magic was selected to host the event, “because of its state-of-the-art theater and other remarkable, newly renovated facilities,” according to Robert Osborne who invited TCM fans “to join us [TCM] for what it certain to be the trip of a lifetime.” 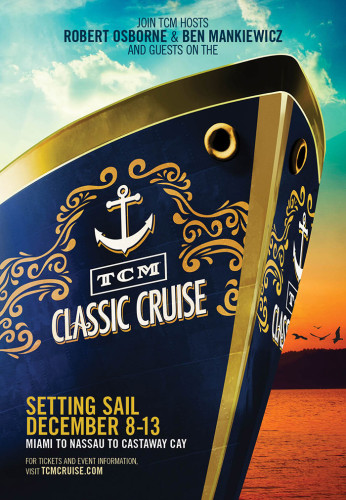 The TCM Classic Cruise hosted by Robert Osborne and Ben Mankiewicz will set sail December 8, 2013 on a revised itinerary1 with stops in Nassau and Castaway Cay.


This sailing is not available on DisneyCruise.com as it has been chartered by TCM specifically for this event.  Prices for this cruise start at $1095 (plus taxes, fees and gratuities).  For booking information head over to TCMCruise.com.  There is a place to sign up for pre-sales which are slated to begin mid-May and booking for the general public will go on sale Monday, June 3, 2013.

The first TCM Classic Cruise was held on the Celebrity Millennium.  The December 8-12, 2011 cruise sailed from Miami on a 4-Night Western Caribbean itinerary to Cozumel.  Headlining the inaugural TCM Classic Cruise were Academy Award winners Ernest Borgnine and Eva Marie Saint, along with Tippi Hedren, director Norman Jewison and Ben Mankiewicz. Cabins ranged from $800-$2500 per persons and sold out in 70 days.

The second TCM Classic cruise sailed from Miami on January 21, 2013 on the Celebrity Constellation.  The cruise cruise was a 5-Night Western Caribbean sailing with stops in Grand Cayman and Cozumel.  The second TCM Classic Cruise featured special guests such as Debbie Reynolds, Mickey Rooney, Arlene Dahl, Sally Ann Howes and Norman Lloyd, along with the Rich Little and game show host Alex Trebek.

1. The original itinerary for December 8-12, 2013 was a 5-Night Western Caribbean on the Disney Magic – Itinerary A – Guests originally booked on this sailing were moved to a different sail date.