Harris Interactive published their 25th annual EquiTrend Brands of the Year list today with Disney Theme Parks earning Brand of Year and Disney Cruise Line garnering recognition.  The Harris Poll EquiTrend is an annual tracking study that measures and compares brand health, and evaluates consumers’ engagement.  Over 1500 brands were evaluated by over 38,000 consumers over the age of 15 in an online survey between January 11th and February 8 of this year. Respondents were asked to rate brands’ performances on a series of important, equity-influencing metrics. Those metrics combine to give Harris Interactive a brand’s overall Equity score.  Brands ranking above the category average in Equity receive the Harris Poll EquiTrend “Brand of the Year” award.

Norwegian Cruise Line earned the top rank as Cruise Line Brand of the Year.  Disney Cruise Line arrived in the third spot between Royal Caribbean International and Princess Cruises.  Of the seven major cruise lines included in the study, 3 scored below the category average. 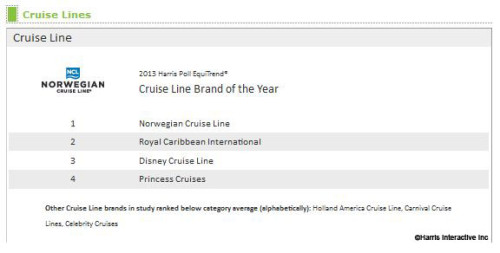 It is important to note that the results of this study are based on a snapshot in time which occurred prior to the Carnival Triumph fire.  A great deal of focus has been put on the cruise industry due to several additional issues of varying severity.  A recent Harris Poll, comparing the before and after affects of the Carnival Triumph incident showed an overall drop in Quality, Trust & Purchase Intent scores for the seven major cruise lines.

Over in the Amusement Attraction category, Disney Theme Parks landed the top spot.  The only other amusement brand to score above the category average was Sea World.

Do you agree with the Harris Poll EquiTrends Brands of the Year Rankings?