This week’s itinerary announcement filled in the remainder of the 2014 calendar for the Disney fleet – except for the [Disney_Wonder]. The last cruise that you can book on the Wonder is a 4-Night Bahamanian Cruise with back to back days at Castaway Cay, which ends on Friday October 10, 2014. Originally, I had speculated the Wonder would undergo an overhaul following her Alaskan cruises based on an some port calendar information, or lack there of until November 2014 when she appears in Grand Cayman. Well, it looks like I placed the Wonder’s dry dock on the wrong end of the speculated itinerary gap.

At this point, I would suggest she would head out for her major overhaul which would last approximately 5 weeks.  Previously, Disney Cruise Line has used BAE Shipyard in Norfolk, Virginia.

The calendar below starts in October 2014 with the last bookable 2014 sailings on the Wonder.  The itinerary shown in blue beginning in mid-November is based solely on the weekly appearance of the Wonder on the Grand Cayman port calendar. 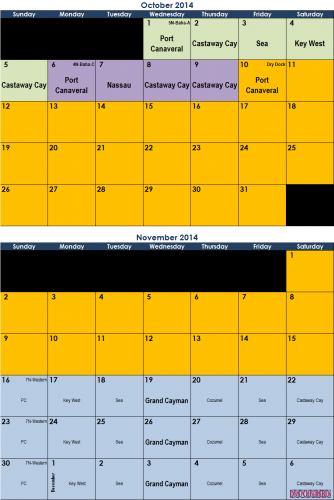 There are a few interesting things going on in the middle part of November 2014 that have not been highlighted yet, or even really mentioned by Disney Cruise Line. The previous speculation has been confirmed, and we now know the [Disney_Fantasy] will indeed be sailing exclusively in the Eastern Caribbean alternating between 7-Night Eastern Caribbean Cruise on Disney Fantasy – Itinerary B (St Thomas) and Itinerary C (St Maarten) beginning November 15, 2014. At about the same time the [Disney_Dream] alters her sailing from Sundays and Thursdays to Mondays and Fridays simply by breaking the 3-Night/4-Night alternating pattern with three consecutive 4-Night itineraries. The November 13, 2014 sailing is one of the Double Dip sailings I mentioned earlier as a unique 2014 sailing.

The calendars below show bookable sailings for the Dream and Fantasy in November and December 2014.

With the Fantasy continuing to sail on Saturdays to the Eastern Caribbean, and the Dream shifting a day, Port Canaveral will then be available on Sundays. This would give the Wonder the opportunity to sail on 7-Night Western Caribbean cruises, and would fall in line with the weekly appearance on the Grand Cayman port calendar beginning on November 19, 2014 when it returns from dry dock.