The following is a review of Captain Marvin’s Two-Stop Stingray City & Snorkel Tour in Grand Cayman. The excursion is a third party tour that we booked online directly with Captain Marvin’s Watersports ahead of our cruise. When booking the tour, we had the option of three different times, 8:30a, 11:15a, and 1:45p. Based on our itinerary, the Disney Fantasy’s scheduled ashore time for Grand Cayman was 10:30a. We didn’t want risk being late for the 11:15a departure. Since this was an independent tour, there was no guarantee we could get on a tender in time. Thankfully, if you read our trip report, we didn’t wait long at all for a tender, and could have easily made it ashore for an 11:15a excursion. We had an enjoyable morning & lunch prior to meeting for our tour. 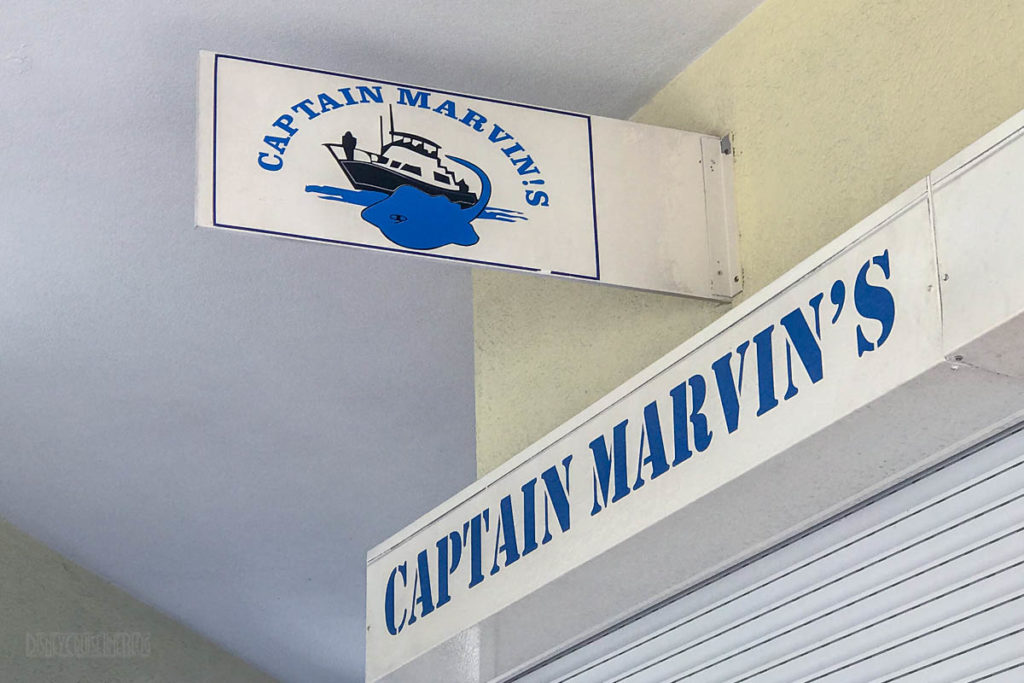 Emily booked the excursion (archived link) just over a month out, and we received a confirmation email with instructions to meet the offices in the Waterfront Centre just a few blocks from the terminal. We were asked to arrive by 1:15p with towels and sunscreen. I’d like to note an important detail. You are not charged for the excursion until you arrive. During our visit, Captain Marvin’s accepted Visa, MasterCar, American Express and Discover. If the ship arrives in Grand Cayman as scheduled and you DO NOT show up, you will be charged to the credit card you used to hold the reservation when it was booked. However, if your ship arrives too late for your tour, or is not able to stop at all, you will not be charged. It is noted on Captain Marvin’s website when the ships are late, they are aware and they will do their best to make adjustments to the timing so that you can still take your tour. They simply ask you to check in at the office in the Waterfront Centre as soon as you are able to get off the ship. 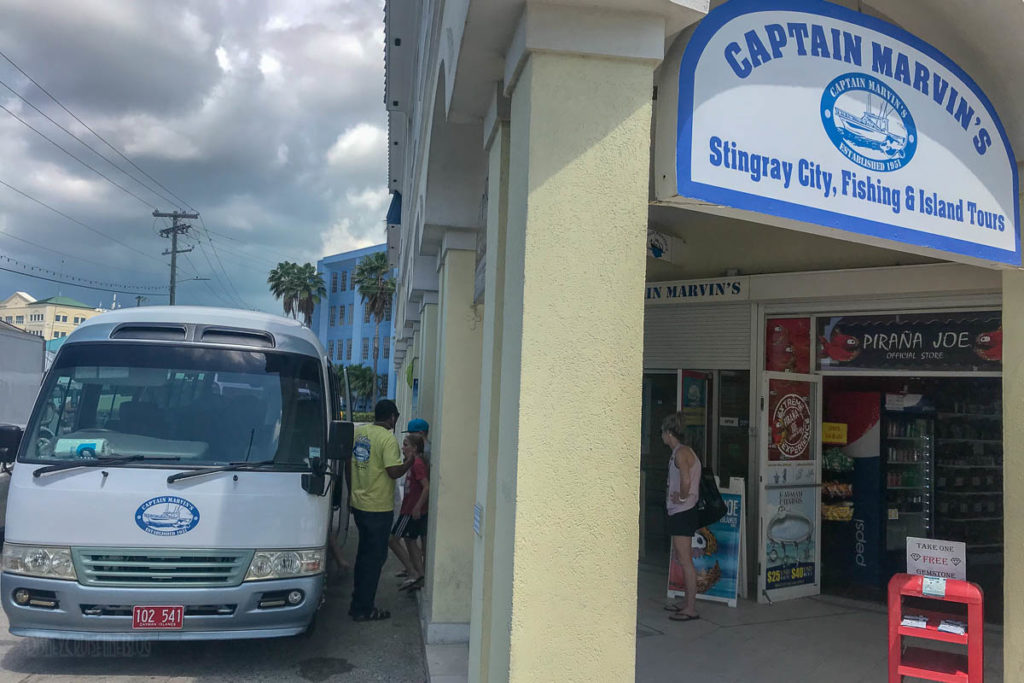 In a rare occurrence that the ship anchors on the south side of the island off Spotts Beach, Captain Marvin’s will have shuttle busses there to pick you up, but you’d need to taxi back from George Town following the tour.

After our morning ashore enjoying the food, drinks, pool, and waterslide at Margaritaville, we headed out to the Waterfront Centre to check in at Captain Marvin’s office. Along the way we encountered a local celebrity, Officer Fabian O’Conner directing traffic.

Captain Marvin’s office was literally a 3-minute walk from Margaritaville. 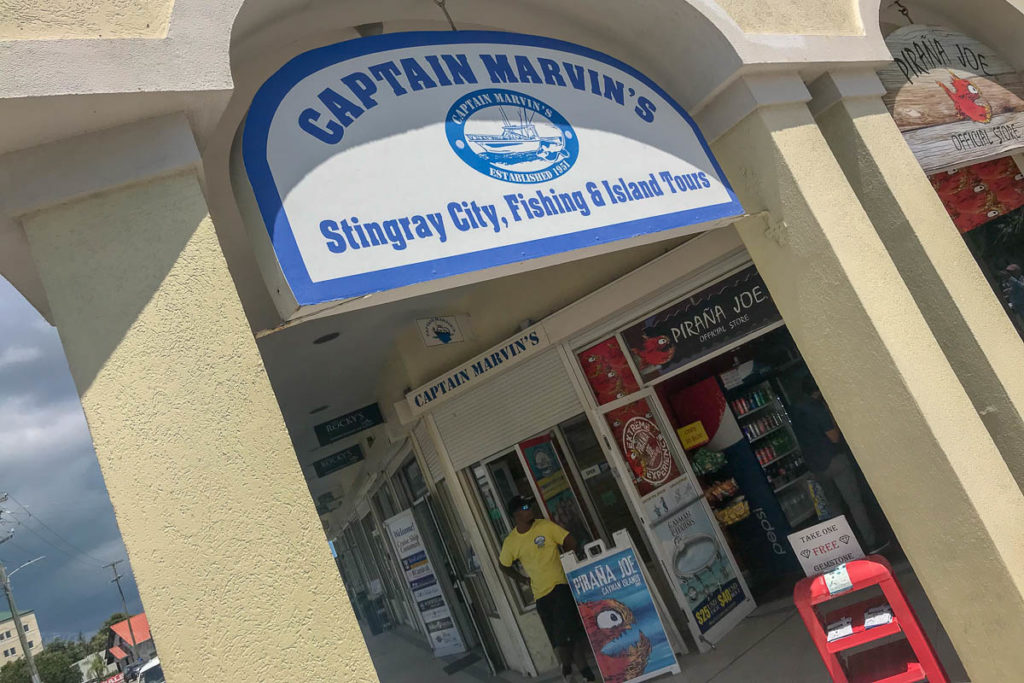 We arrived just after 1 o’clock, checked in, paid, and loaded into a van. 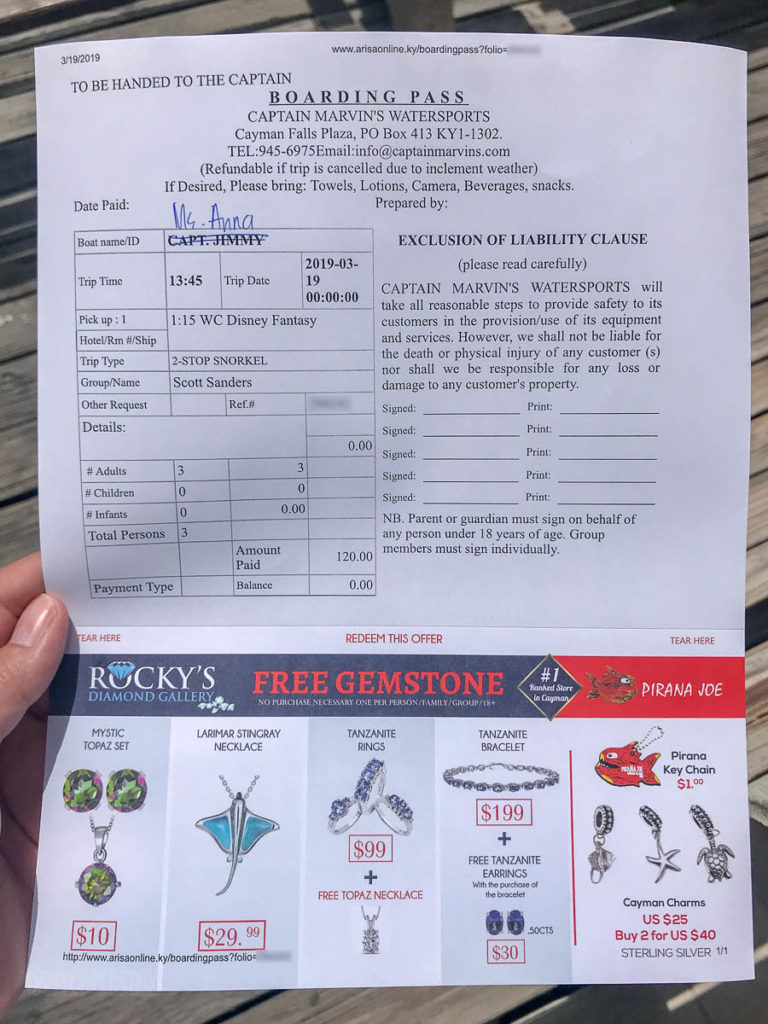 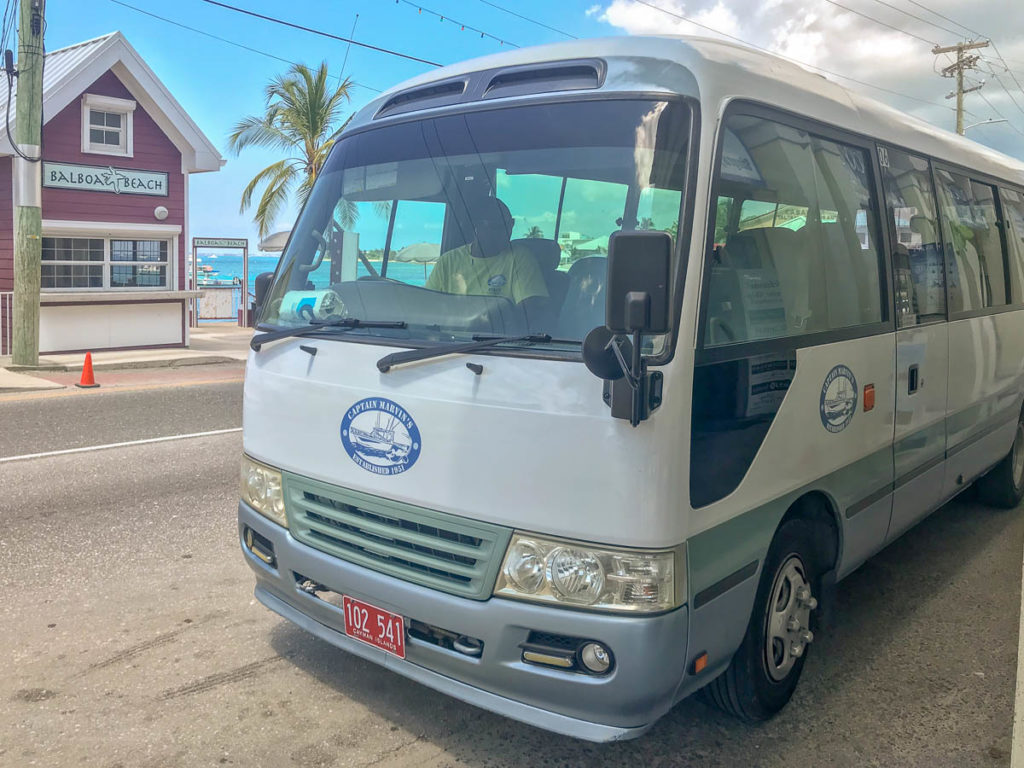 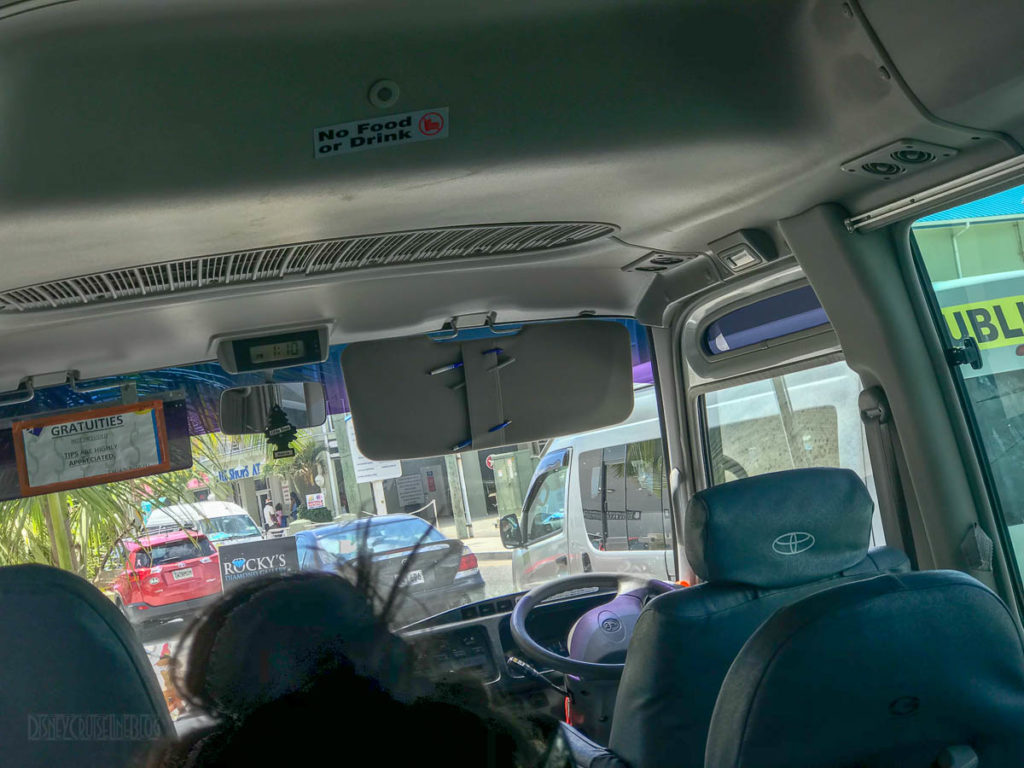 The drive to Captain Marvin’s dock was no more than 15 minutes. Below is a boring time-lapse of our trip to the dock.

Upon arrival, we boarded the boat and were soon off to Coral Gardens, our snorkeling spot. 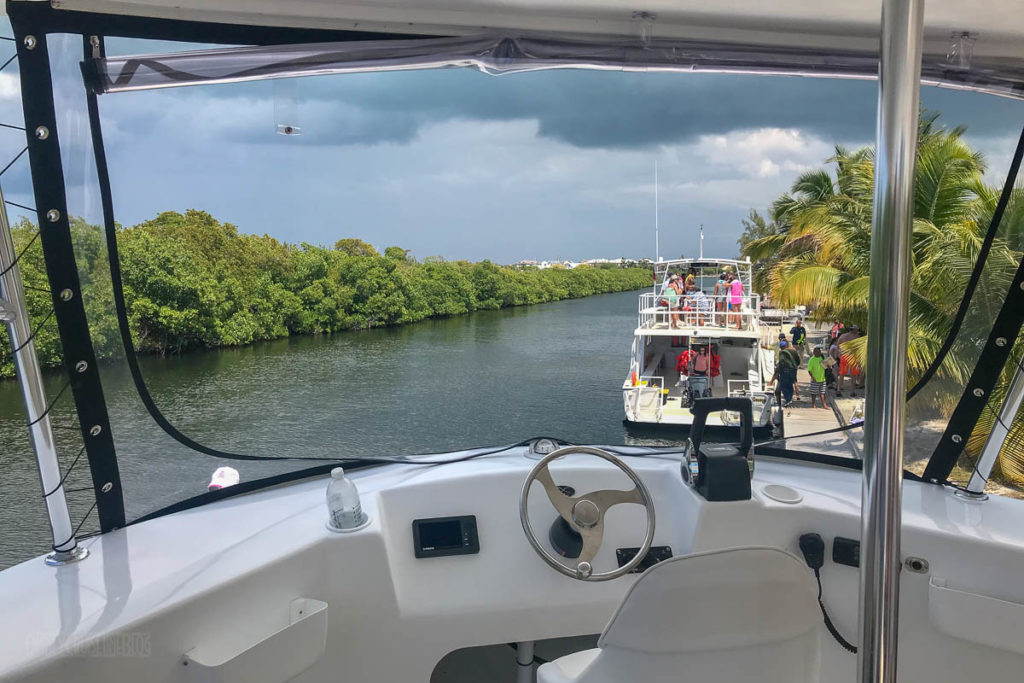 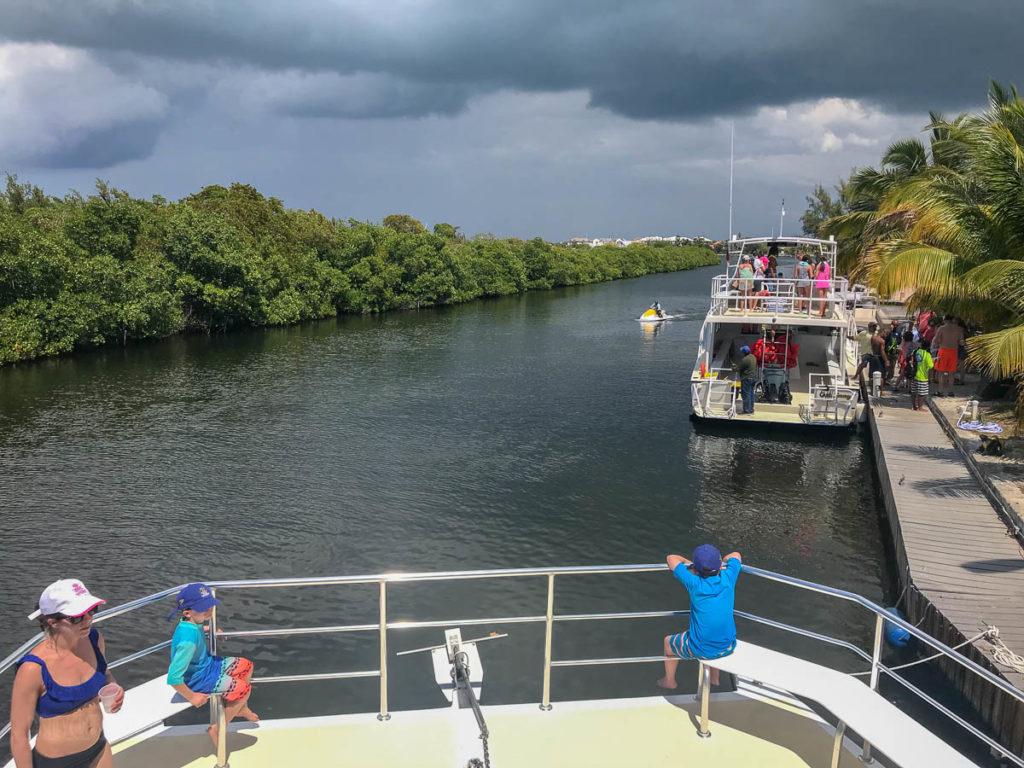 On our way to Coral Gardens, the deck crew passed out snorkeling gear and let everyone know vests are available. Once anchored at Coral Gardens, we were given about 30-minutes to snorkel off the back of the boat. The spot was great with a decent amount of coral formations and a ton of fish. It certainly helped that the crew was chumming the water to get the fish into a feeding frenzy. 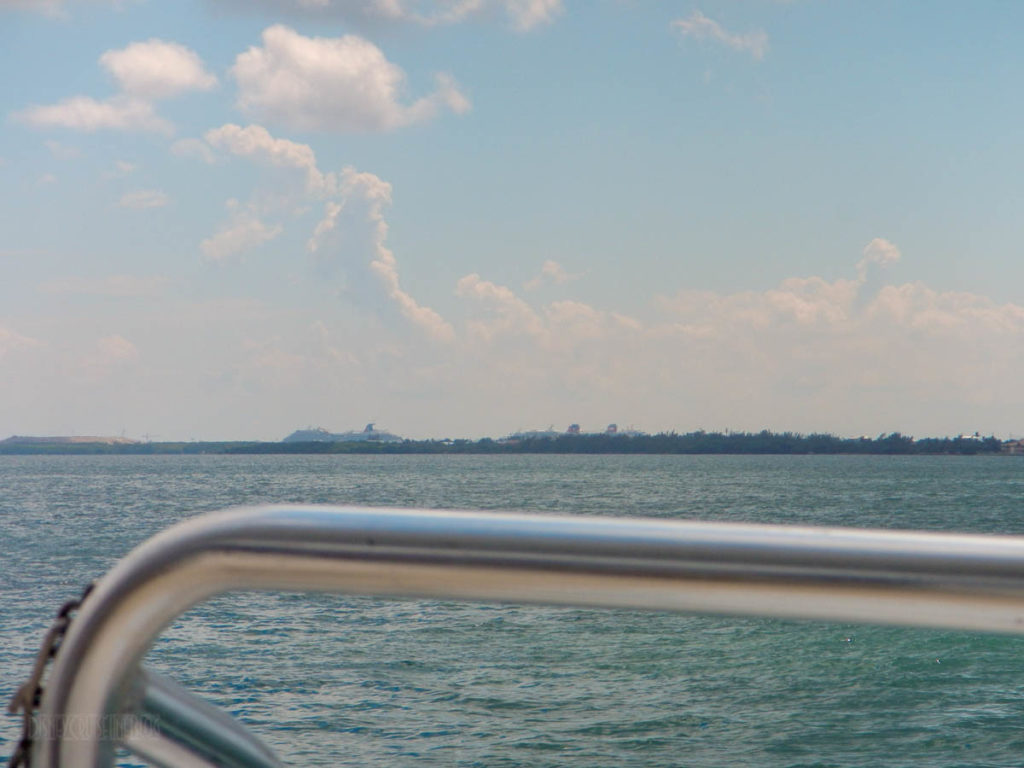 It always put a smile on your face when you can see your ship from your excursions. 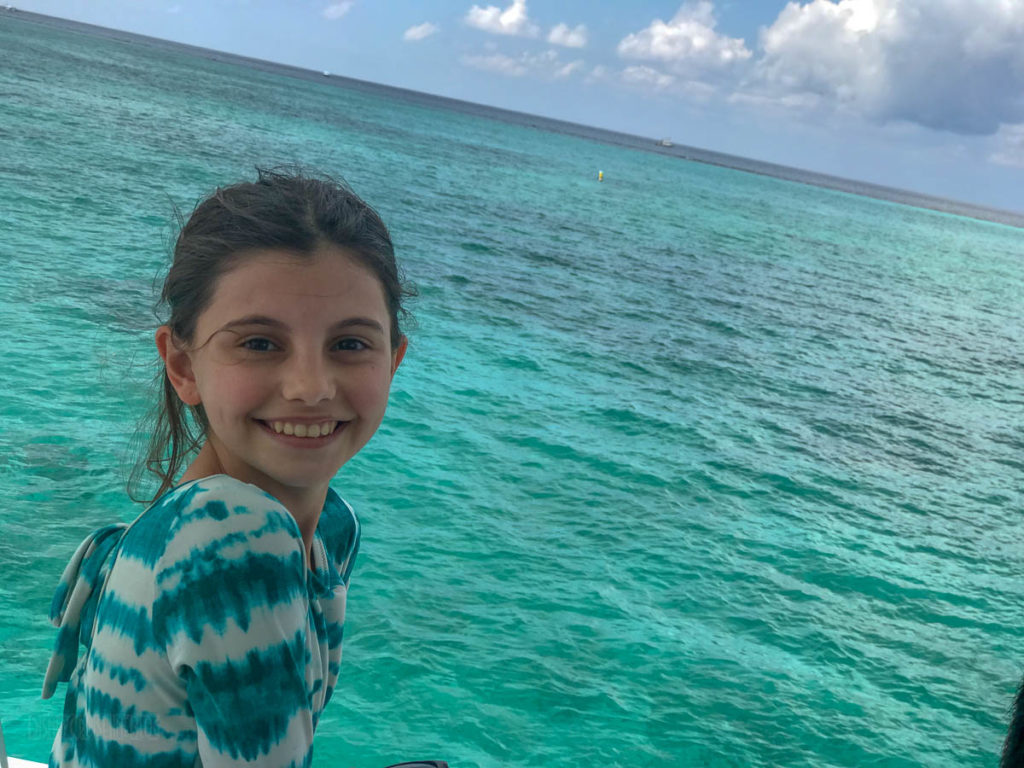 After our allotted snorkeling time, we pulled anchor and headed off to the Stingray City Sandbar.  Even if you had no idea where the sandbar was located, you wouldn’t have any problem finding it; just look for all the boats. 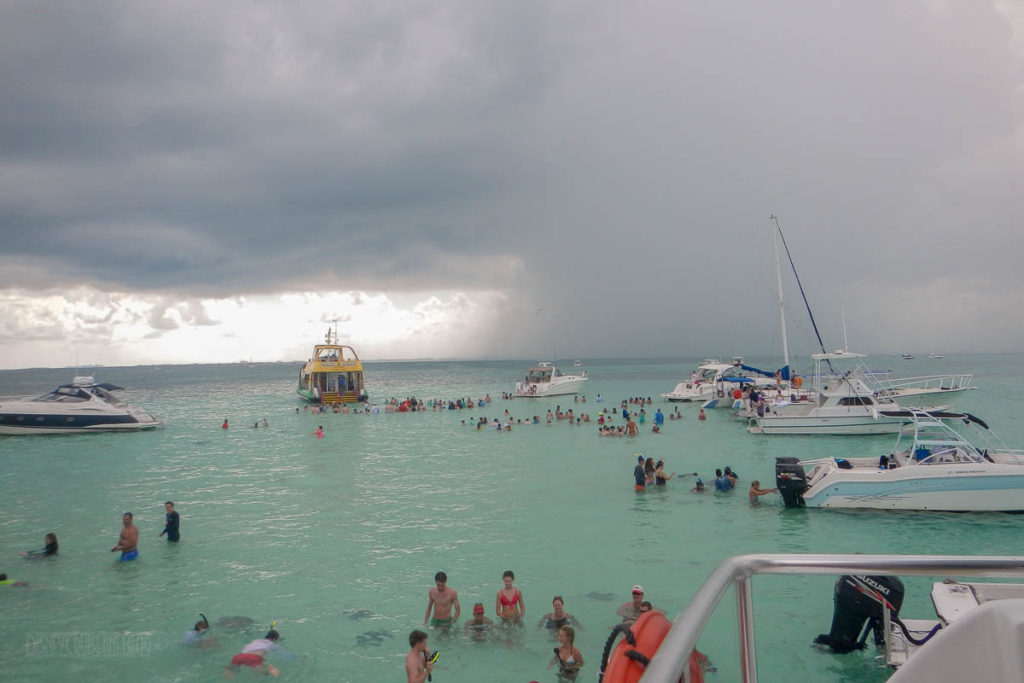 Immediately upon arrival, we knew that this wasn’t one of those Alaskan port adventures you book to see whales, but in fine print it says whales are not guaranteed. Well, if there was any excursions to put a promise in stone, it is Stingray City. The sandbar was peppered with stingrays. It was already an incredible sight to see and we were not even in the water. 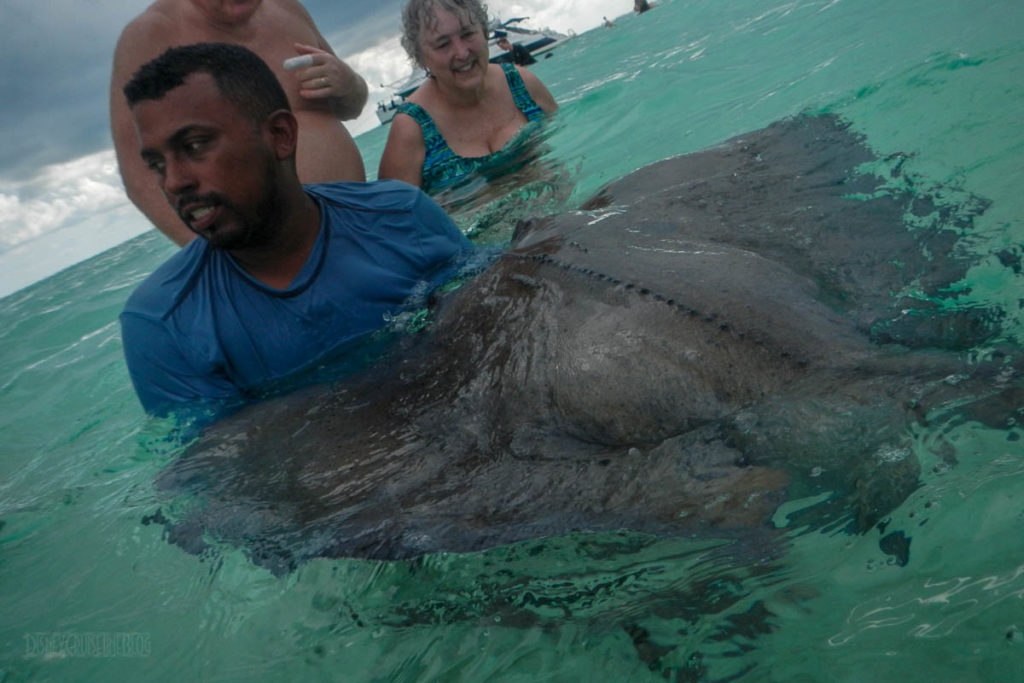 Truth be told, I had an irrational fear of rays as a kid, but I mastered the stingray shuffle early on in life. Thankfully, that fear is long gone.

Did you know the male stingrays only reach about 2-3 feet? 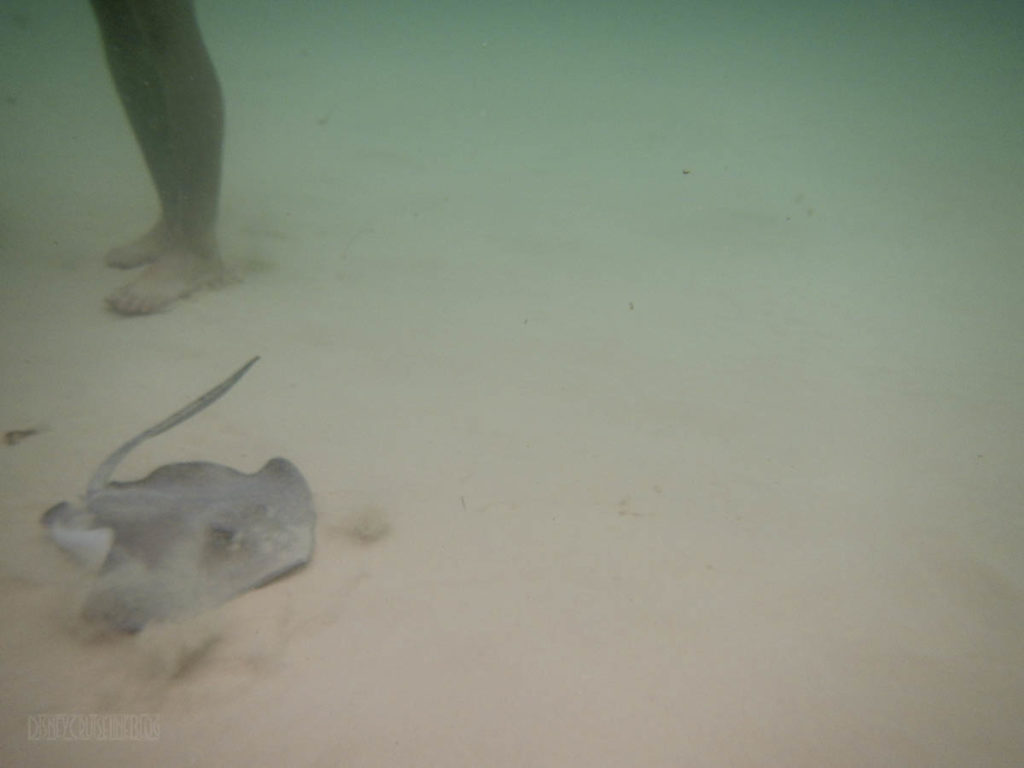 Whereases, the females grow much larger. 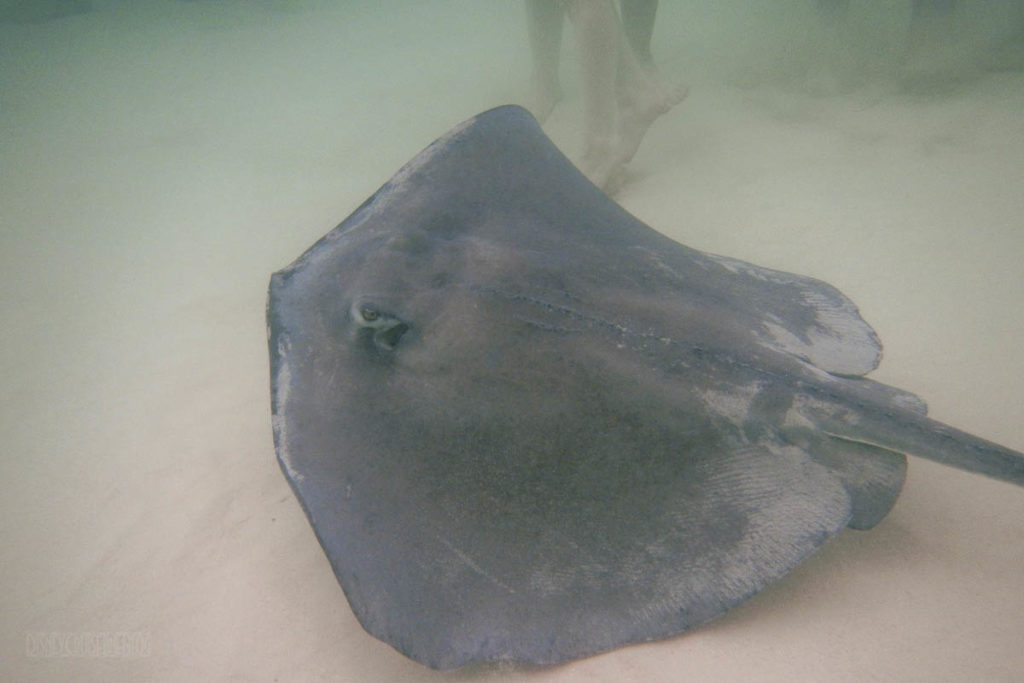 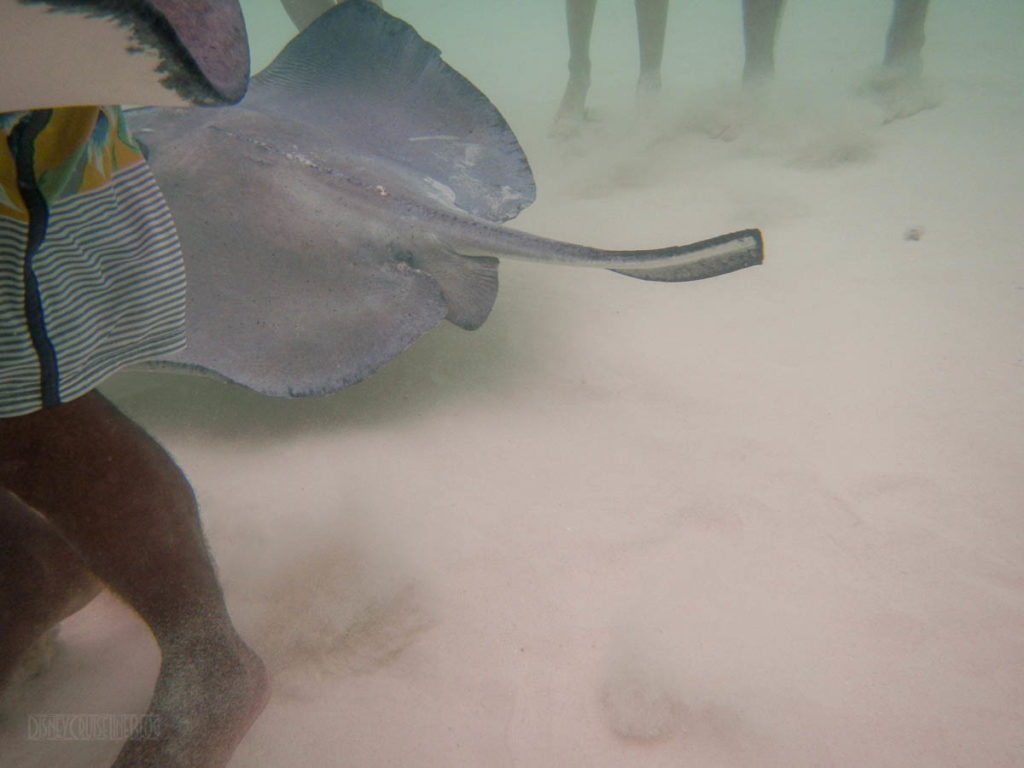 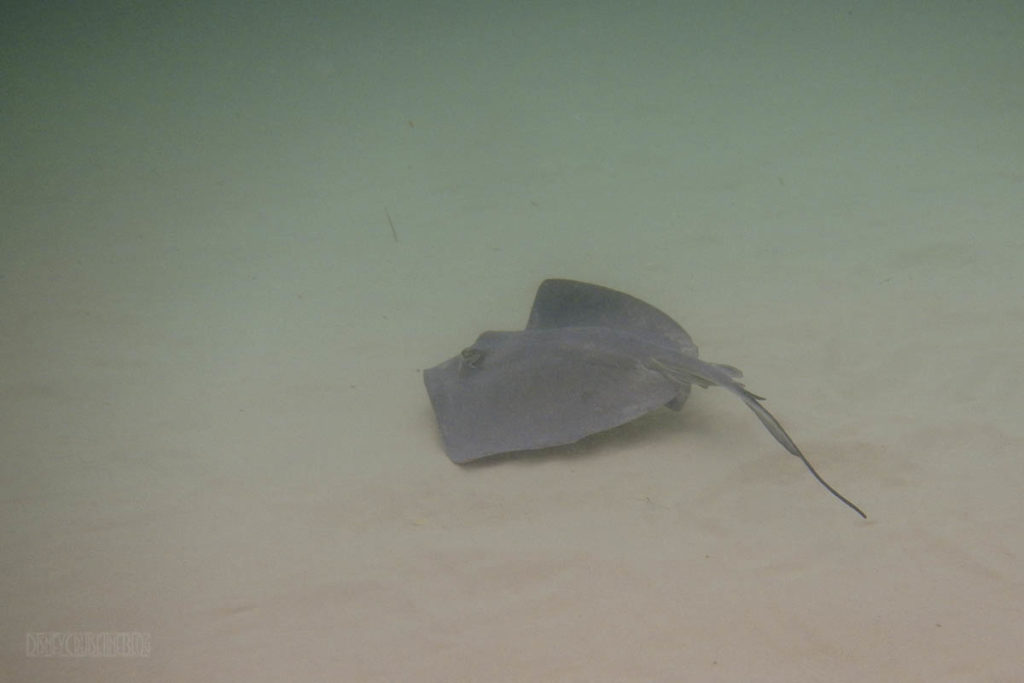 The majority of those on our excursion were from a cruise ship and everyone on our bus was either on the Carnival Freedom or the Disney Fantasy, so the driver was nice enough to drop up off at the port instead of the pickup spot. It only saved about 5 minutes, but it was nice none the less.

We’ve been looking forward to Stingray City for years, but felt it was best to wait until Isabelle was a bit older. There were kids of all ages in on the sandbar, but only you can judge what is the right age to take your kids to the Stingray City sandbar. If you are looking for advice for when you do go, try to get away from the crowd. The stingrays are all over and the odds someone in the crowd is going jump is high. The only time I felt mildly concerned was when I was trying to feed a stingray and a kid jumped a couple feet away startling the ray. Other than that, the experience reminded me of our cats rubbing up against my ankles during feeding time.

For anyone interested in booking this excursion, we specifically booked Captain Marvin’s Two-Stop Stingray/Snorkel Tours (archived link). The tour is currently being offered only on weekdays with 3 departure times per day. At the time of our visit, the excursion was $40 per person for ages 12 and over, $30 for ages 4-11. Children under the age of 4 are free, but they request you bring your own flotation device for children under age 4.

The map above will give you an idea on the various locations around the island. The overall schedule will likely vary, but following is a rough timeline of our day to help you plan your day in Grand Cayman if you choose to book this tour.

Snorkeling is snorkeling, but the snorkeling at Coral Gardens was much better than some of the port adventure locations we’ve visited elsewhere during cruises. I also loved that we were not required to wear snorkeling vests! The swimming with the stingrays was such a cool experience. With that being said, the excursion is highly recommended and something we’d do again. From the shoreside representative at check-in, to the deck crew and captain, Captain Marvin’s entire crew was great.

All aboard was 5:30pm & we were back on board just after 4:30pm. Overall, it was a great excursion & truly enjoyable experience. Let us know if you have any questions!