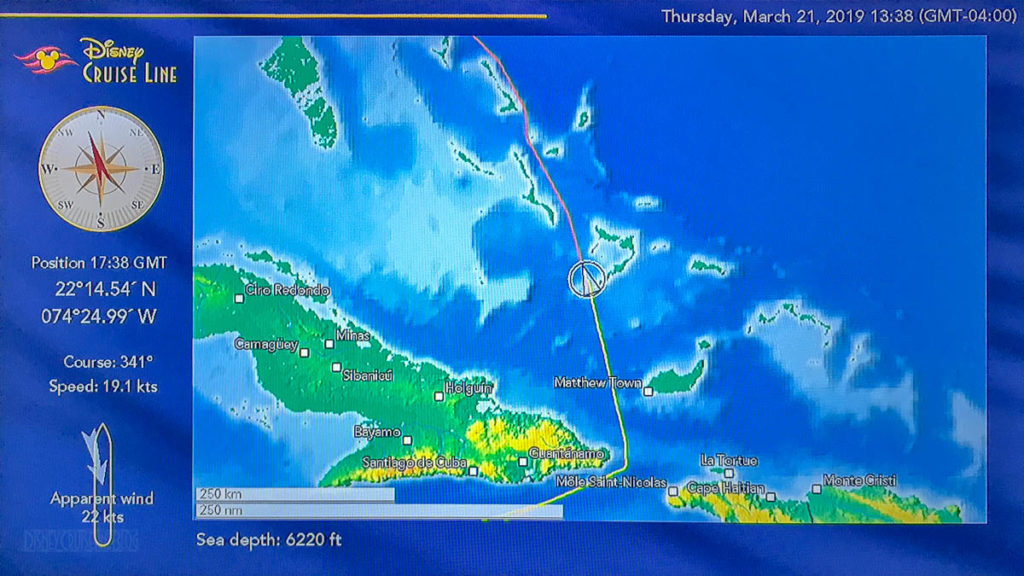 Today, Emily started with a 5-mile morning run on deck 4, while Isabelle and I walked around the ship taking some photos. 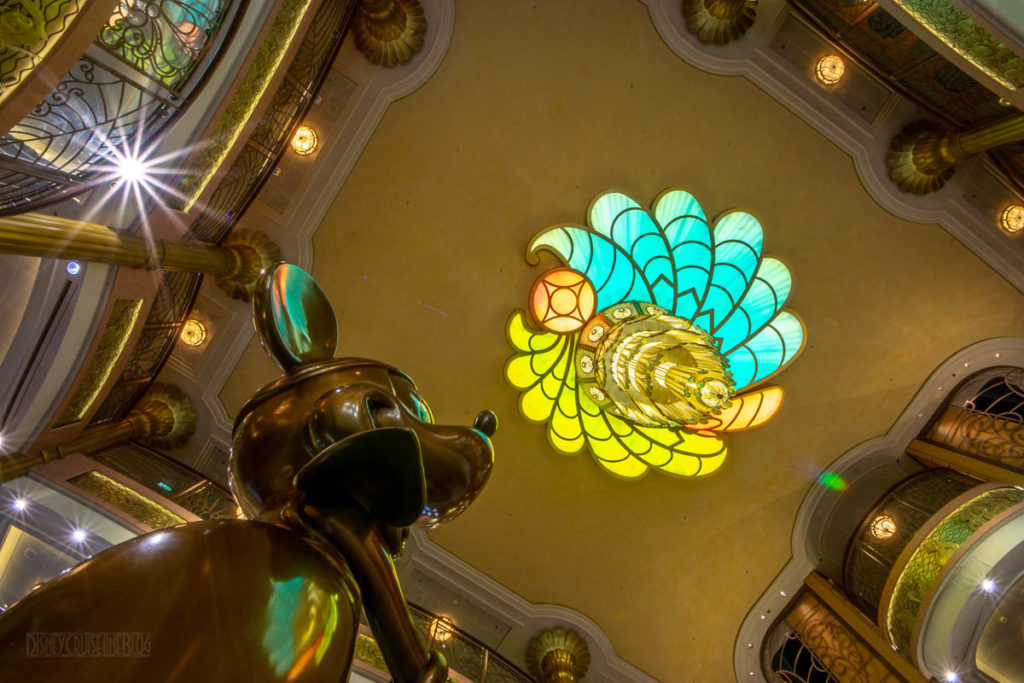 After two days ashore, today’s plan was exciting – our plan was to hang out at the pool and watch movies. This plan required getting to the pool early because even before the crew started to unstack pool chairs, there were guests waiting to grab their chairs. As soon as the crew started to put the chairs out and open the pools, guests were plopping towels down and walking off…

I took one for Team Sanders, and camped out in a chair to secure our spot and unlike most guests, we really never left.

Soon after Emily and Isabelle joined me at the pool, I headed over to Cove Cafe for a brief pit stop to fuel up for today’s events. This was the first cruise I tried to stay away from the Cove and Vista cafes, but I started to go into caffeine withdrawal. 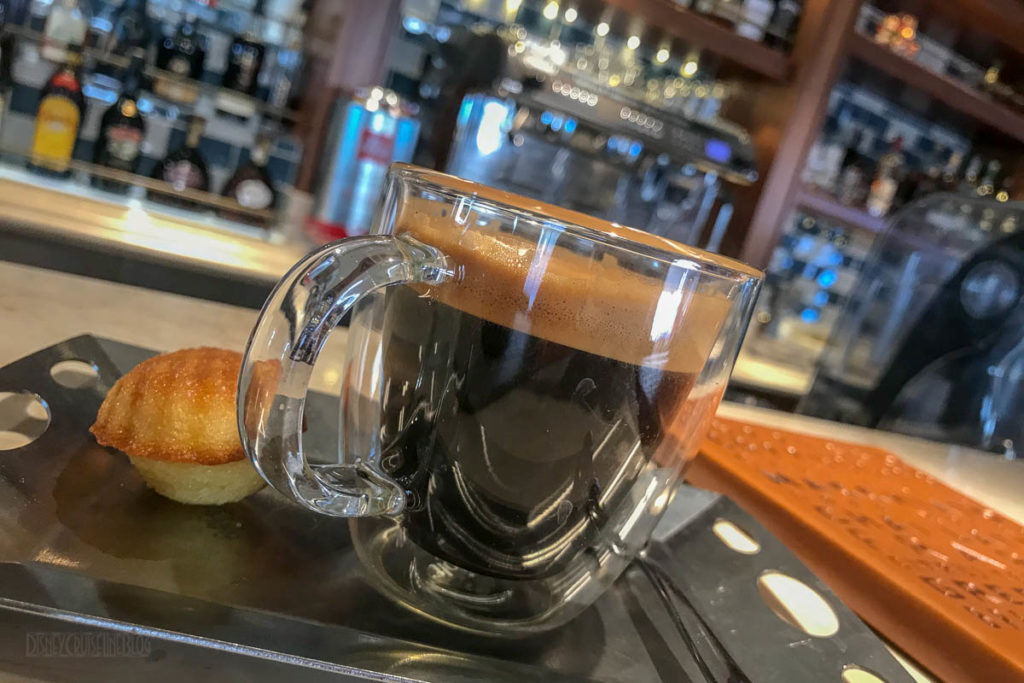 The movie lineup today was The Muppets, Hercules, and Moana. 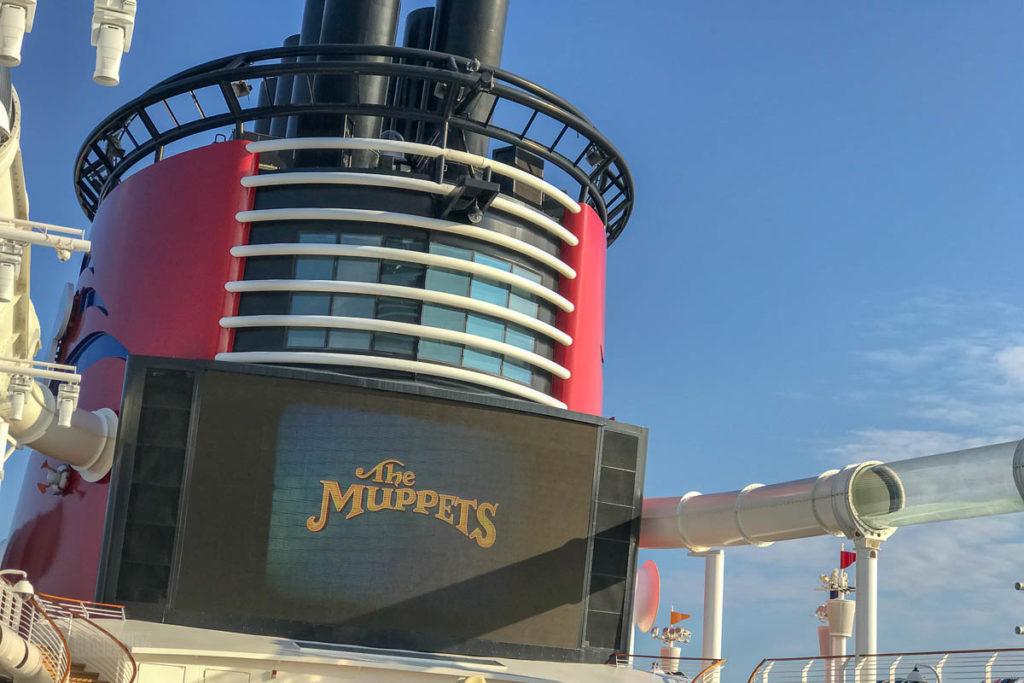 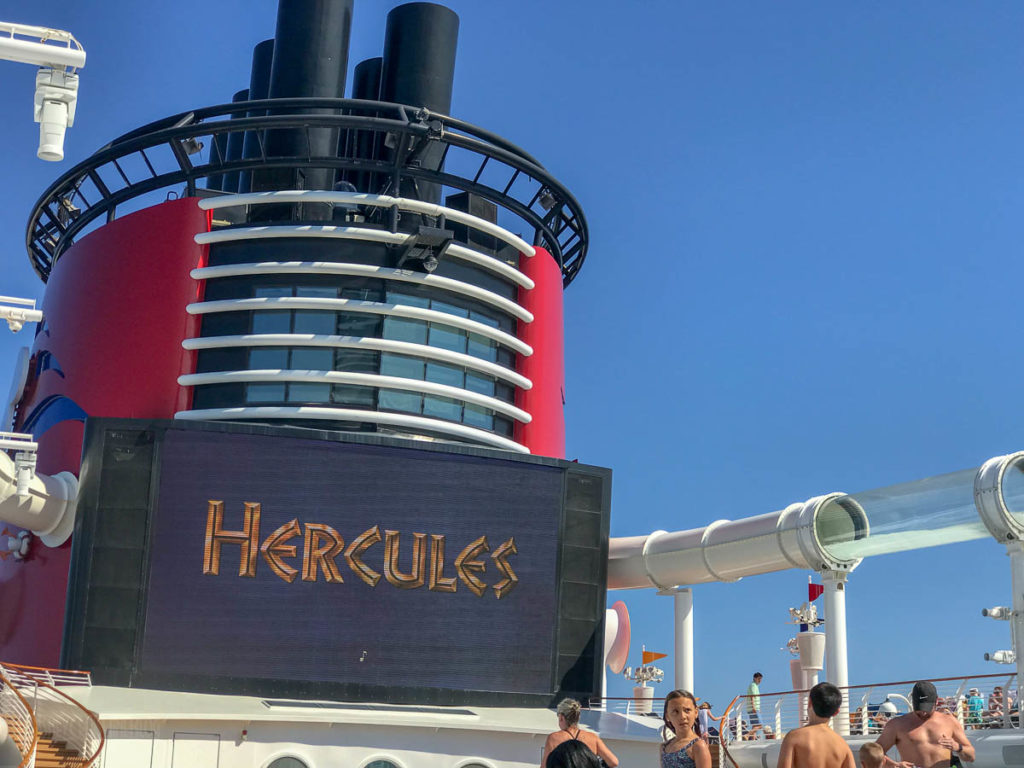 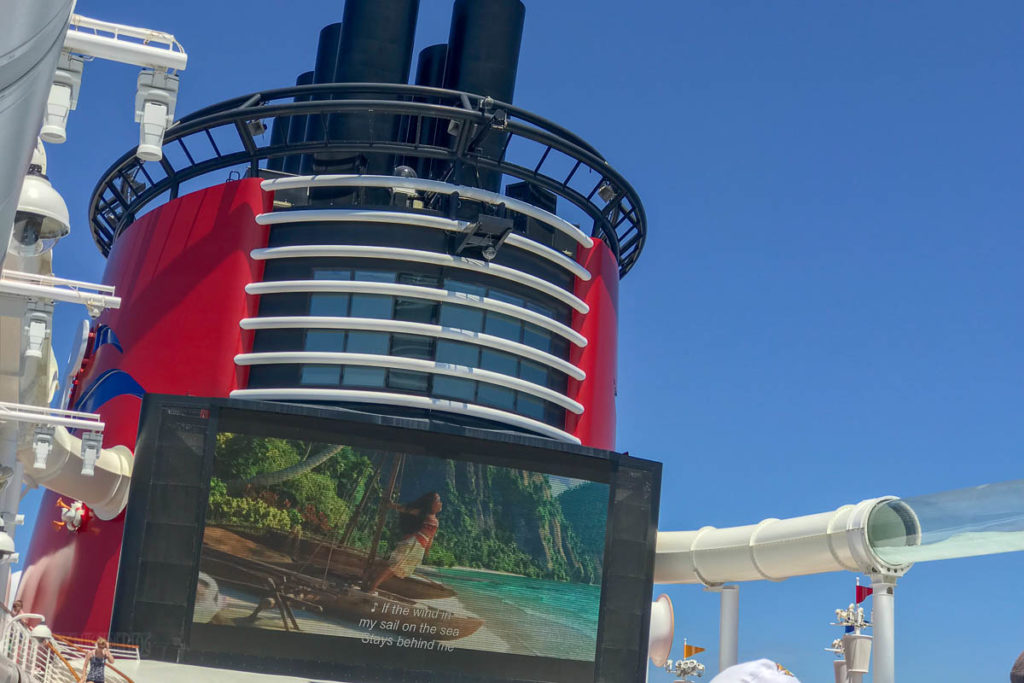 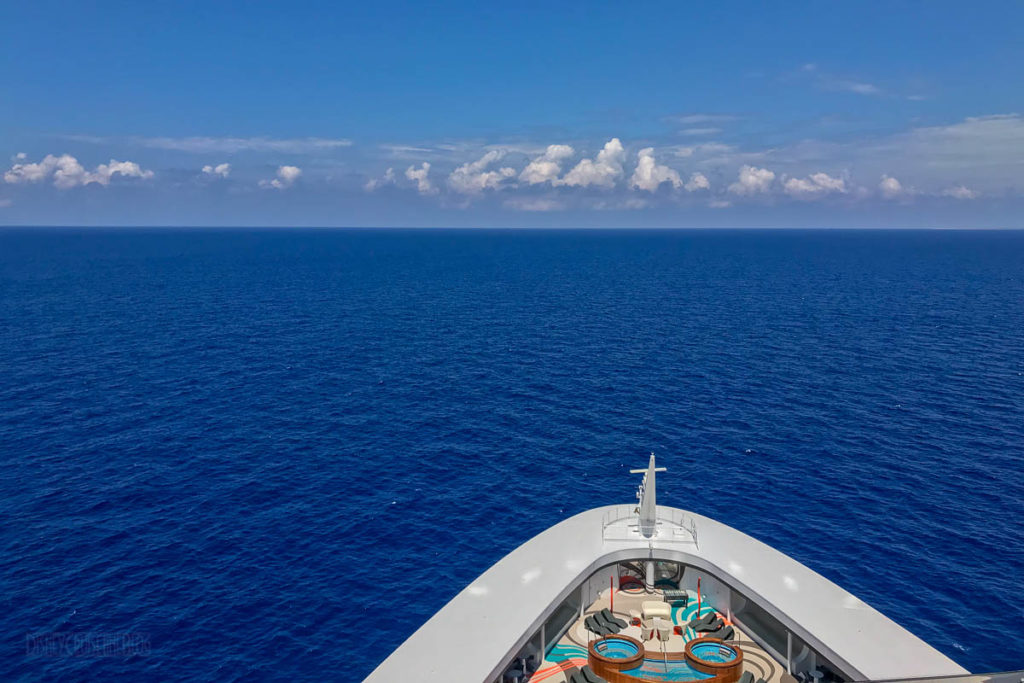 Lunch was a sampling from Flo’s and Cabanas. Emily talked with Chef Warren at Flo’s who served up a tasty vegan sausage sans bun with sautéed onions & peppers with extra jalapeños. It was actually really good. 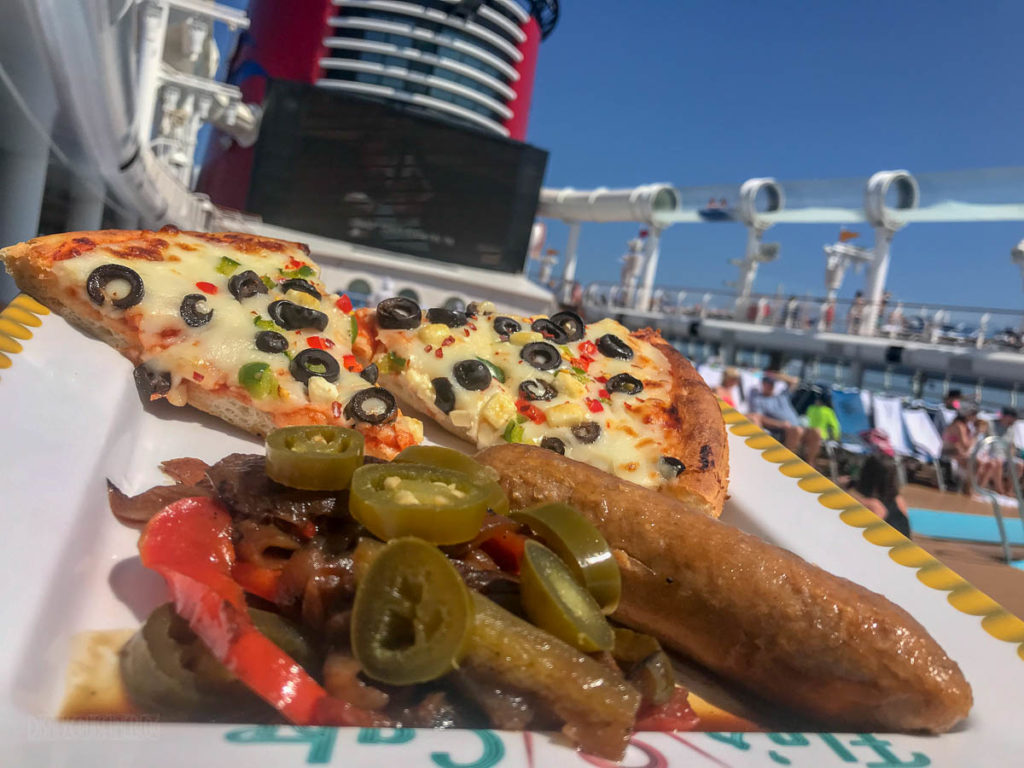 The snow cones returned to the pool deck, the cost is $3.95 plus the 15% auto gratuity. 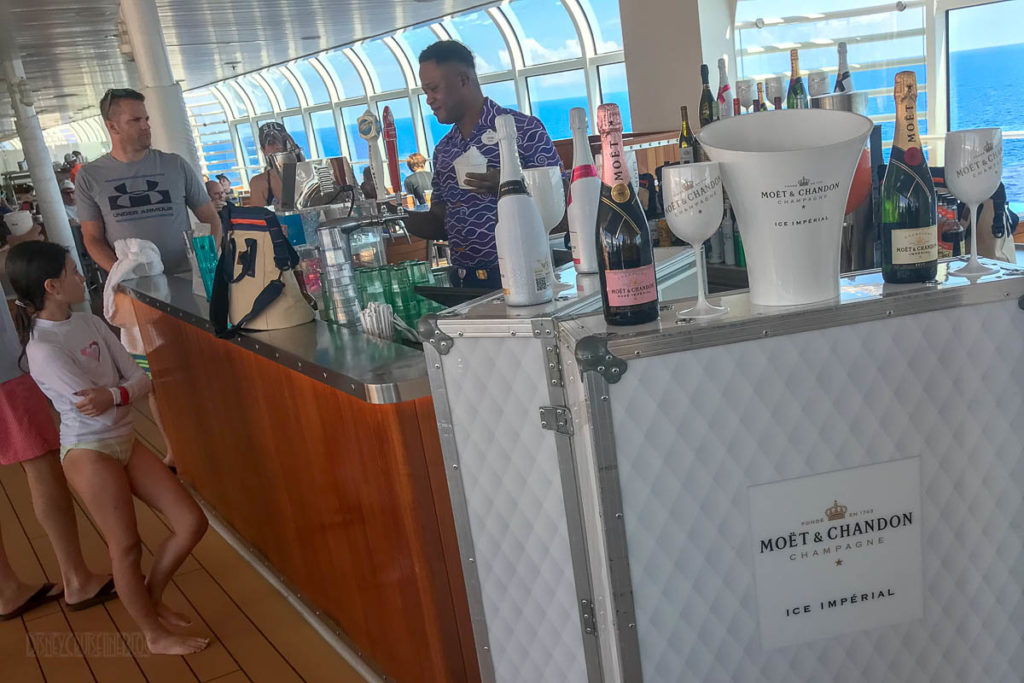 The snow cones as very refreshing according to Isabelle, but it melted fairly fast leaving mostly a bowl of blue liquid. Emily and I are now wondering if they would serve up an adult version maybe topping it with some coconut rum or the like. 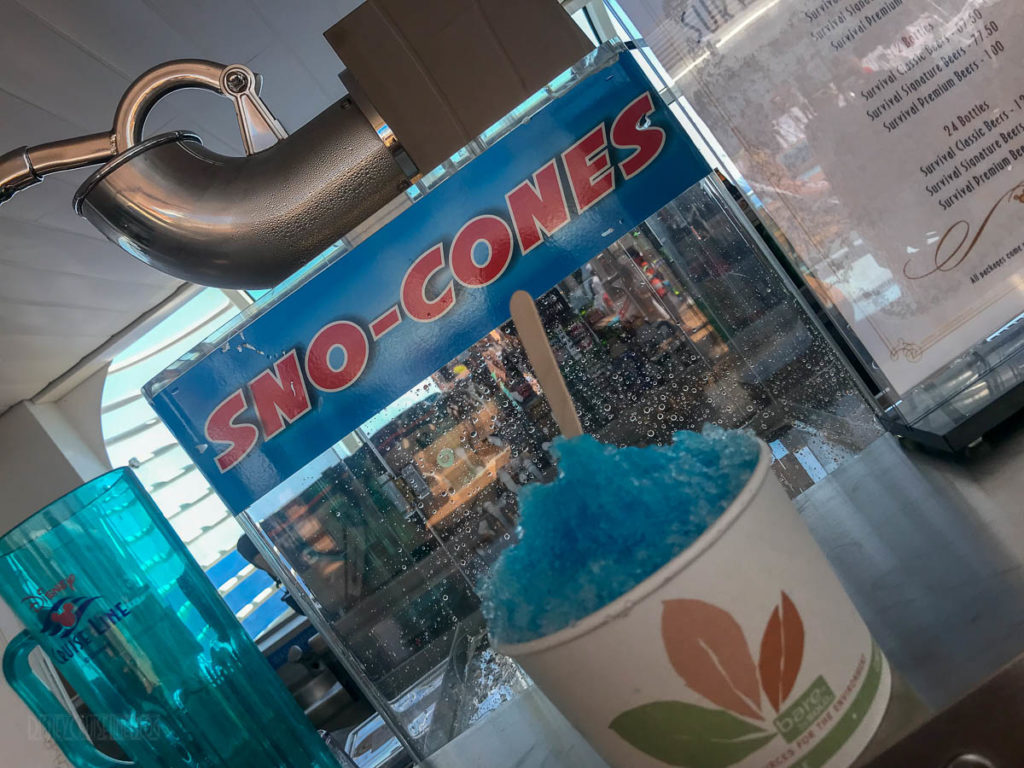 After our favorite part in Moana (Shiny!), it was time to call it a day on the pool deck and head in to clean up so that we could start an afternoon of trivia at the request of Isabelle. We are very lucky that she still wants to do things together as a family for the most part, rather than break off when she is given the choice. We had Iron Man 3 on while we all showered & got dressed for some casual time before dinner. 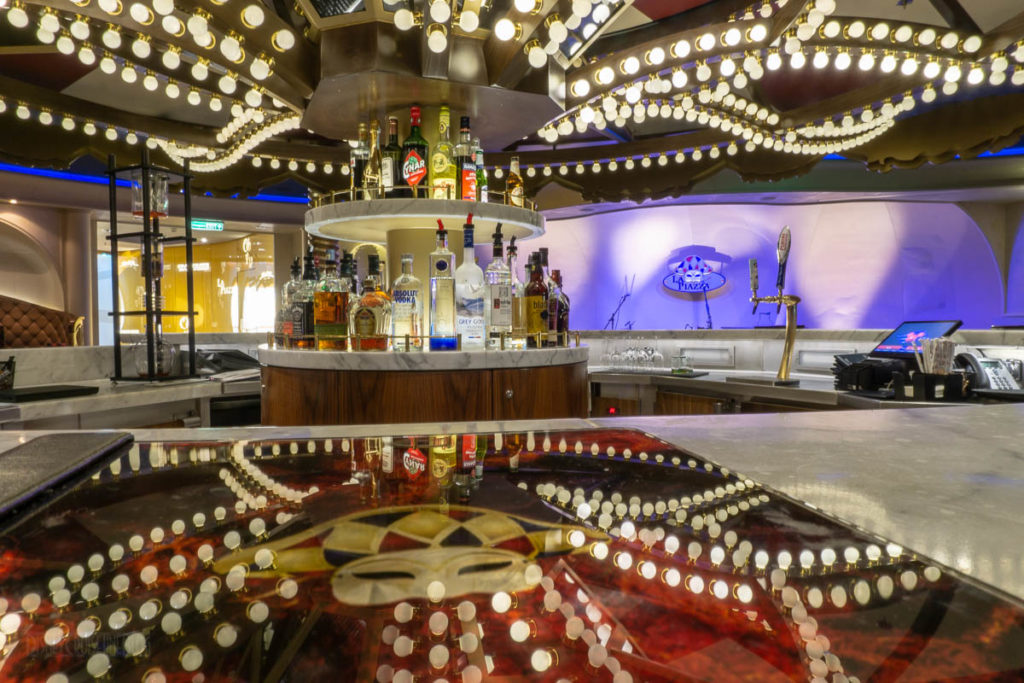 First up, was Pixar trivia in an overflowing La Piazza. Now, trivia has become a very competitive with usually one or two teams coming close to a perfect score. Pixar trivia however, was a mix of questions with multiple choice options & it was not very difficult. On the heels of Pixar trivia was another round of TV tunes trivia, where we knew a whopping 5 of the 15 question. Isabelle bolted for EDGE before we even finished scoring our sheets.

Following a leisure morning poolside and the low impact trivia, we just sat in O’Gills while I caught up on the trip logs (literally, I am caught up to this point and have nothing else to write until we do something new, but I still have Jamaica to upload) surrounded by March Madness games while we await 2000’s music trivia at 3:45pm. 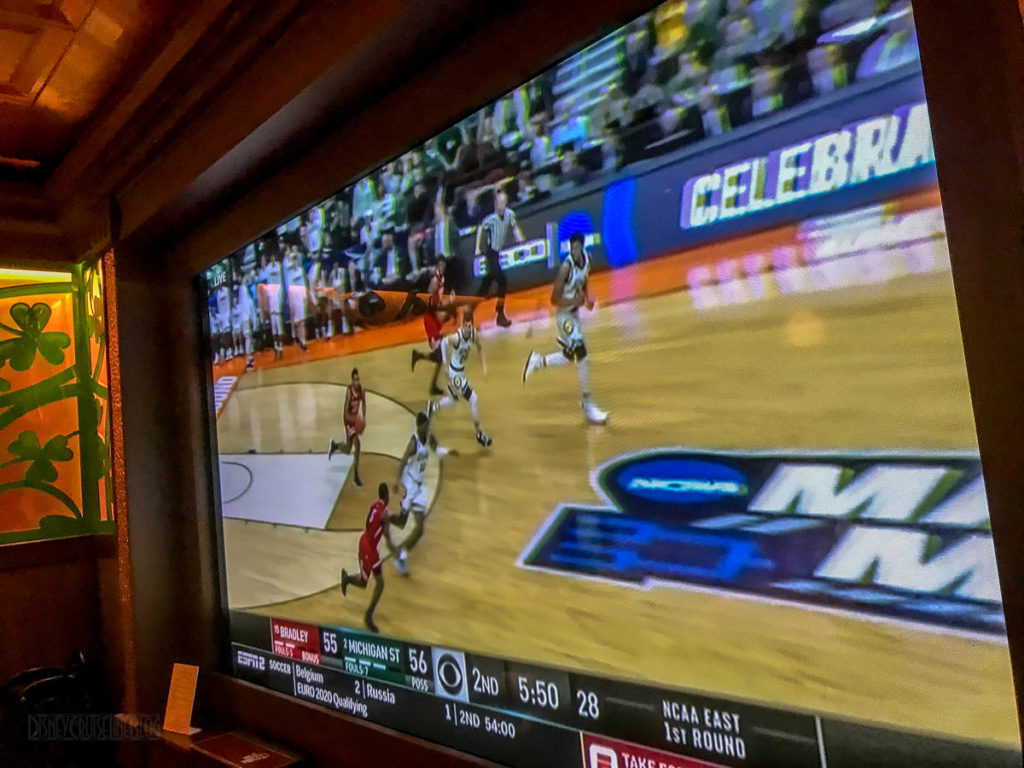 Ugh, DCL being DCL again, March Madness… 1.1 seconds left in Auburn vs New Mexico State and they tune in soccer. Thankfully, there was quick corrective action because O’Gills was about to riot. As I sit here rambling, waiting for this second officials review to put 1.1 on the clock to watch an airball, I must say….while it is awesome to be on a cruise, I miss the multiple concurrent March Madness game watching experience I can get at home.

On our way to dinner we took some time to look at the artwork in the Vista Gallery. 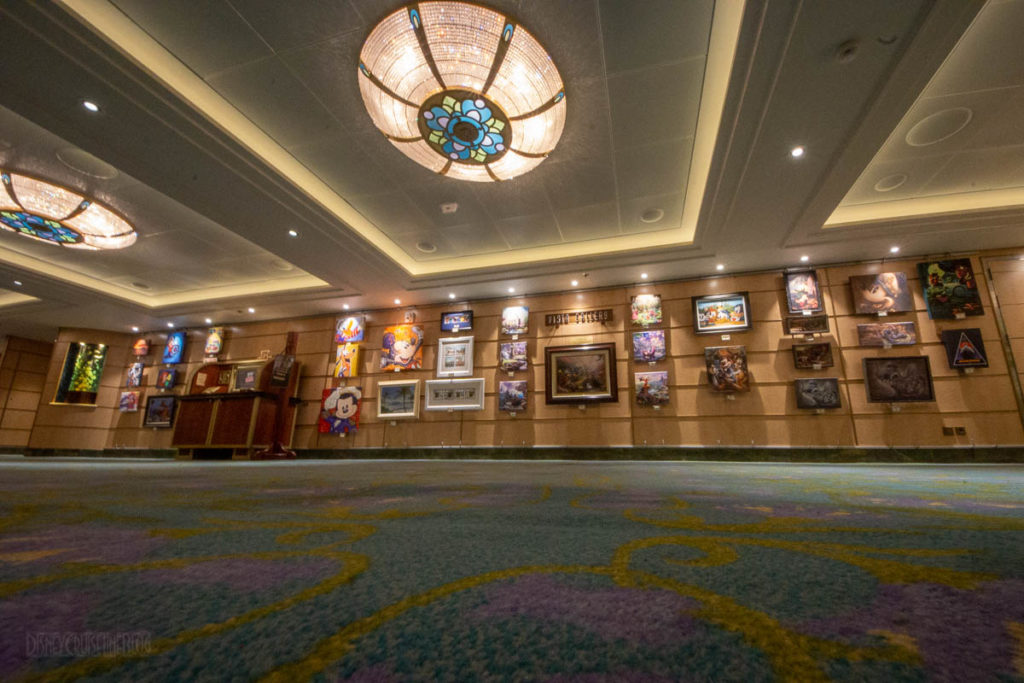 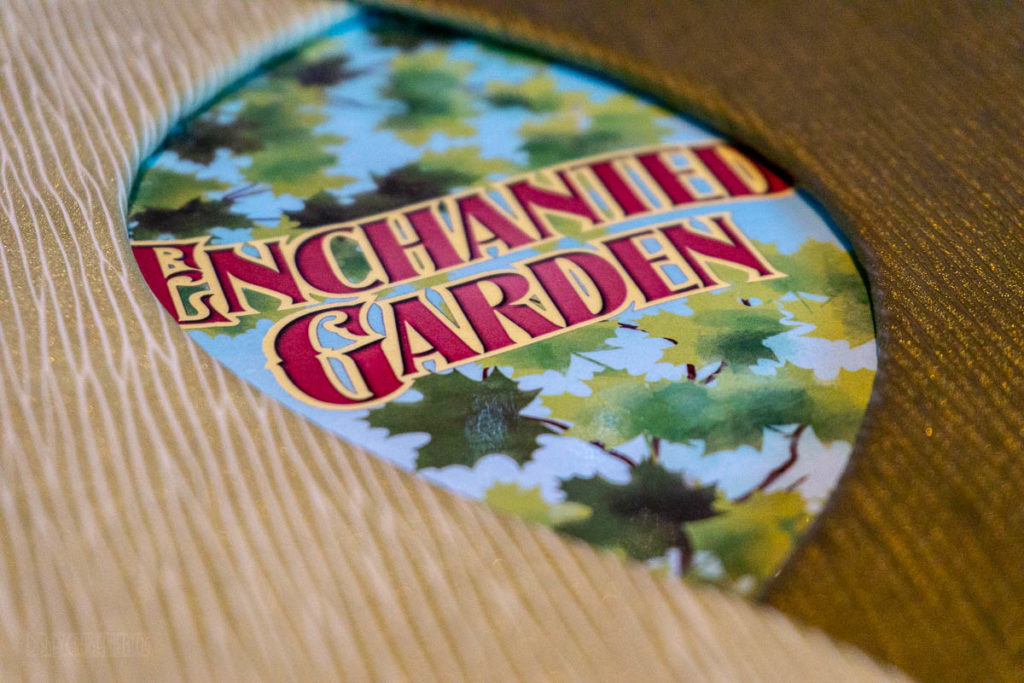 Semi-formal night dinner was back in Enchanted Garden with the Prince & Princess dinner menu. Sticking with the suggestions by Mario and Cindy, we all had an enjoyable dinner. 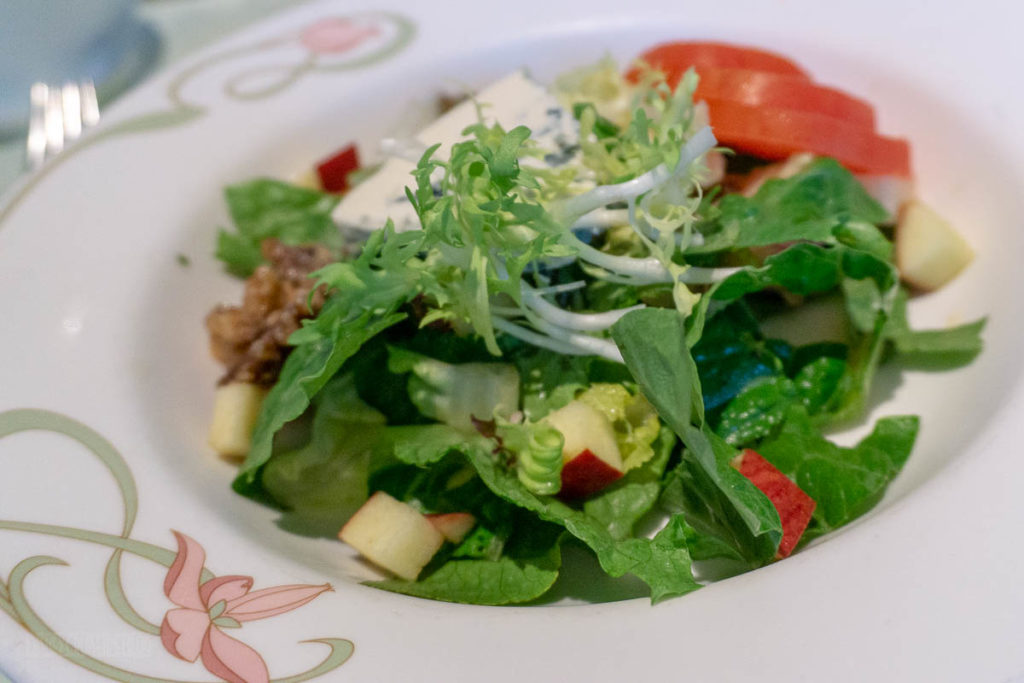 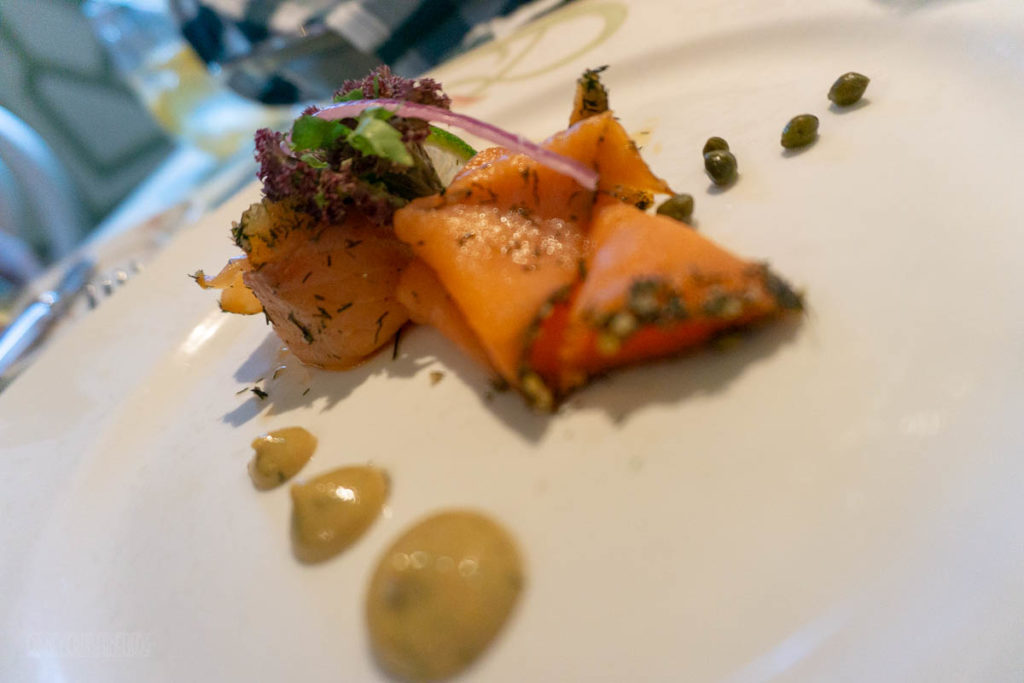 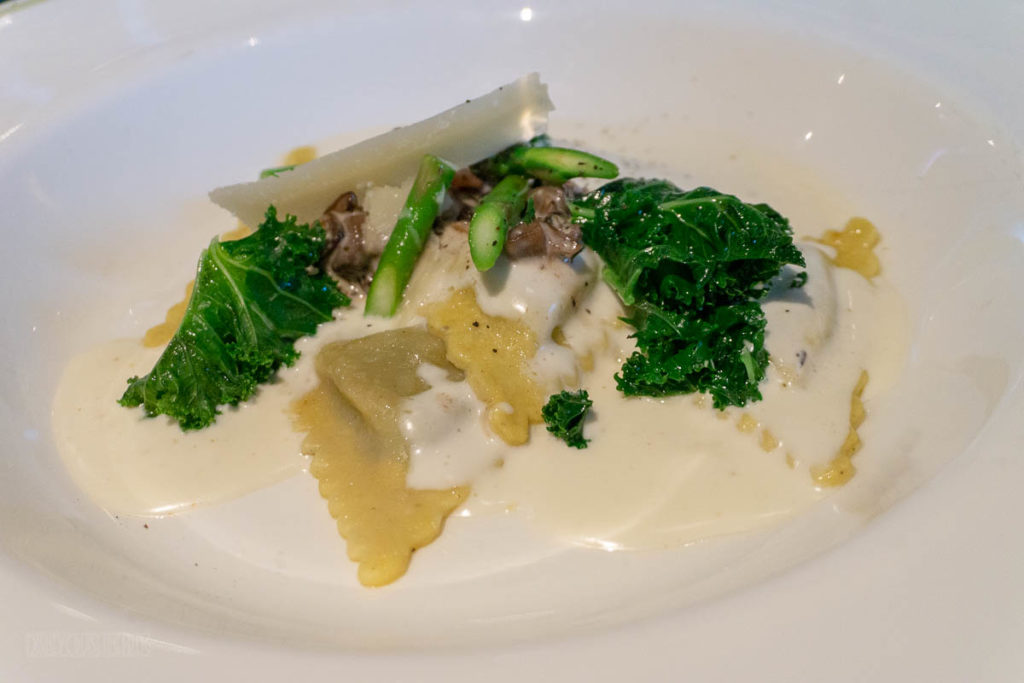 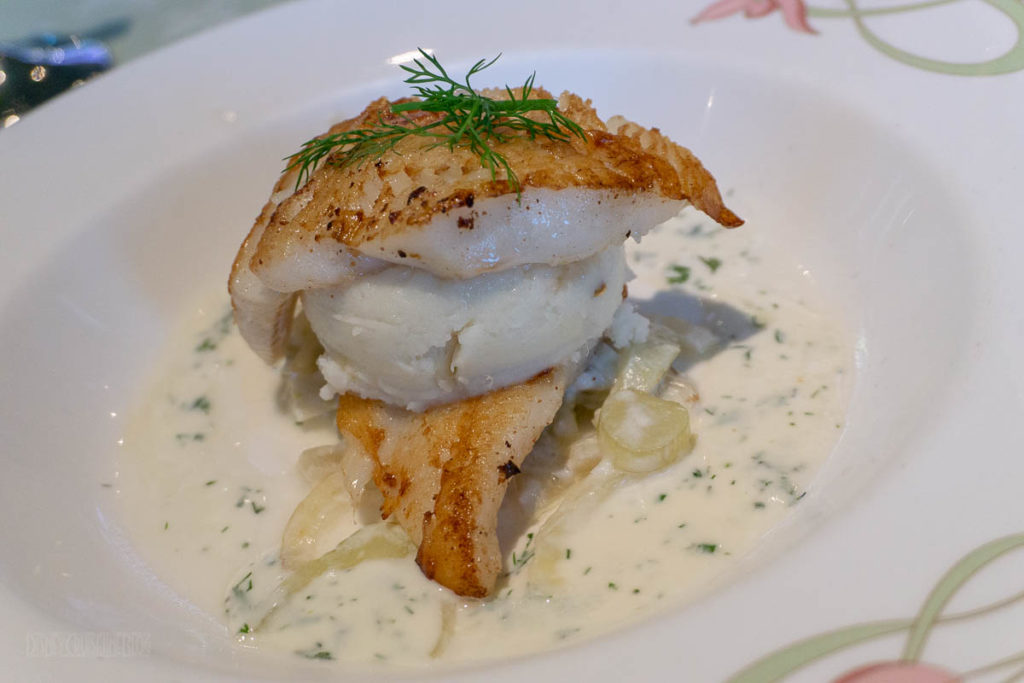 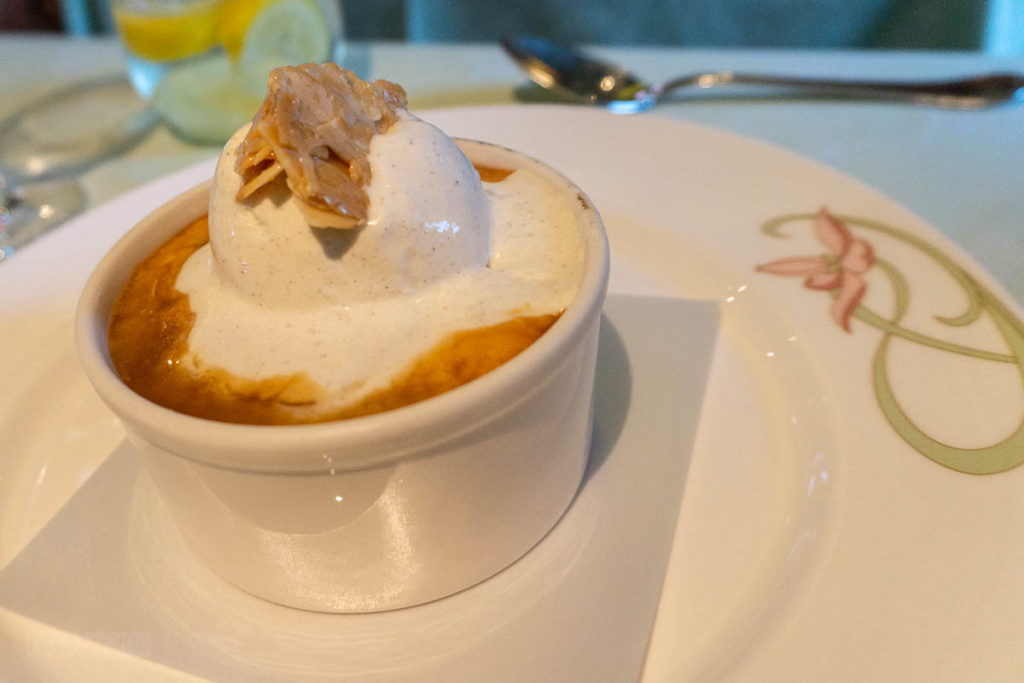 My lone disappointment was I only ordered one of the Strawberry Tower desserts Cindy said was a must. Oh boy, she was right. This may be the new gold standard for comparing main dining room desserts. This was right up there with some of the amazing treats we’ve had from Amorette’s Patisserie at Disney Springs. 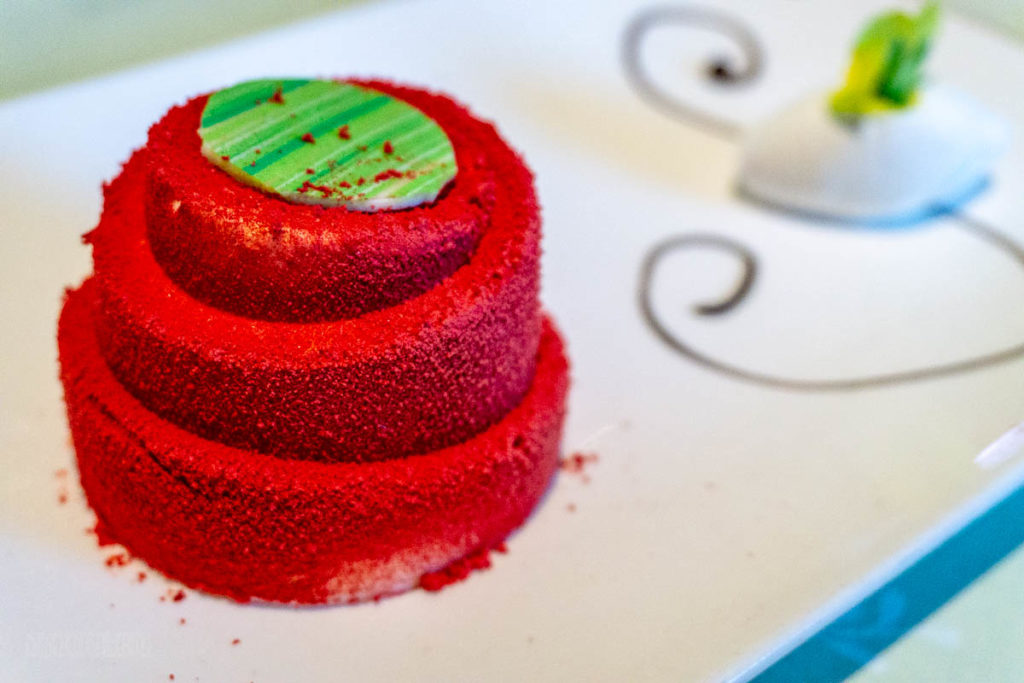 I’m going to miss Mario and Cindy. It has been a long time since we have a serving team that knocked it out of the park like they did this week.

After dinner we returned to… Did you guess O’Gills? Well, you are right. This time it was for another round of 90’s Tune Trivia and let me tell you, Emily almost single handily won this for Team Sanders. Only problem, her teammates didn’t help fill in the 2 artists and 1 song. 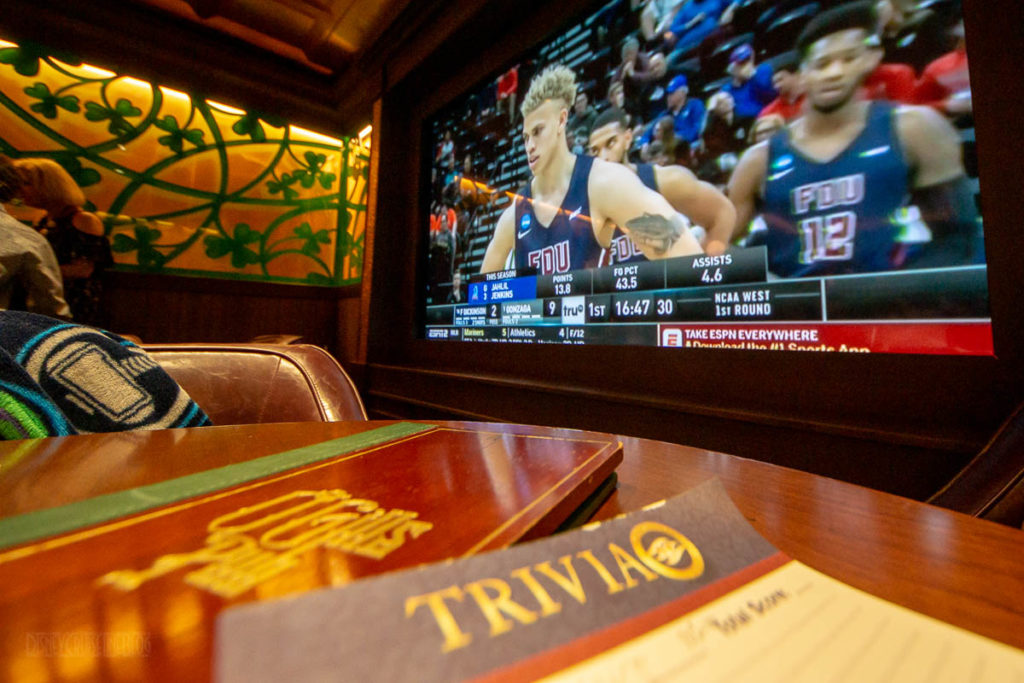 This evening’s entertainment was the comedy and juggling show of Marcus Monroe. Marcus was fantastic, and I’m not just using that adjective because we are on the Fantasy. The juggling was great and his timely comedy kept the audience in stitches. 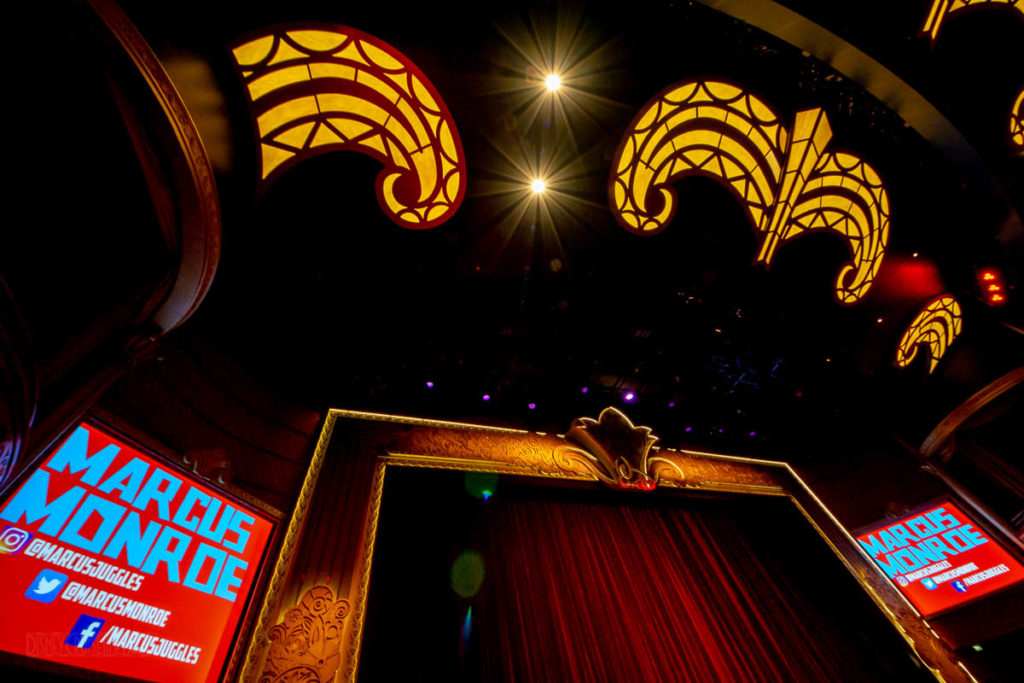 After the show, we all headed to bed and were rocked to sleep by the ship. Finally, for the first time in ages, we’ve been on a ship that was moving!!! I was sleeping by 9:45pm, but woke up around midnight wide awake. 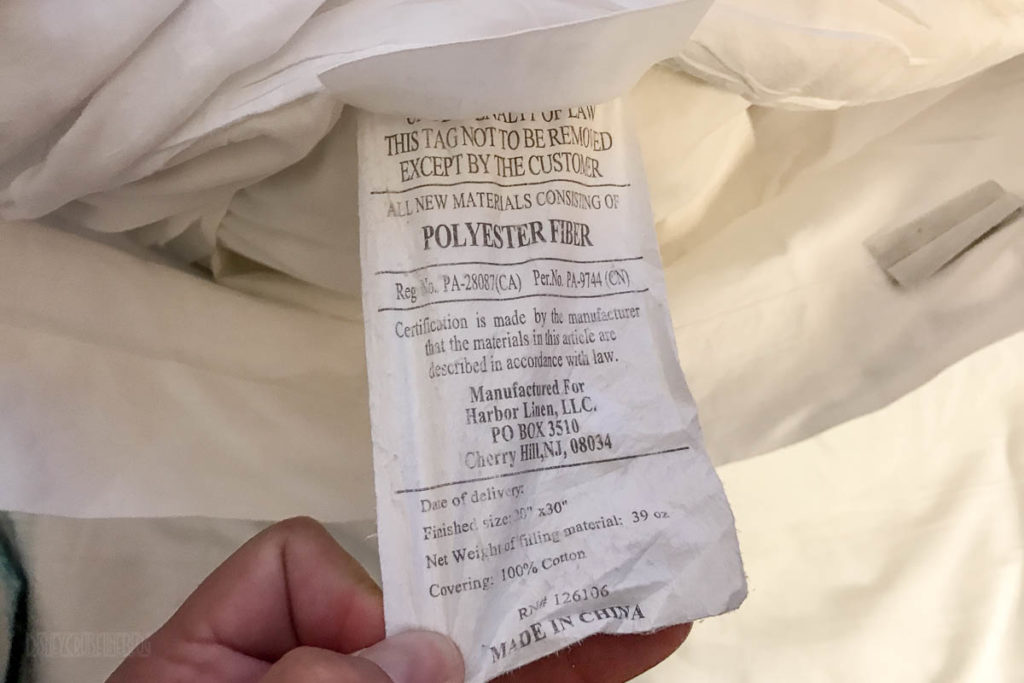 I blame all 39oz of polyester fiber in the New Generation pillow by Harbor Linen. 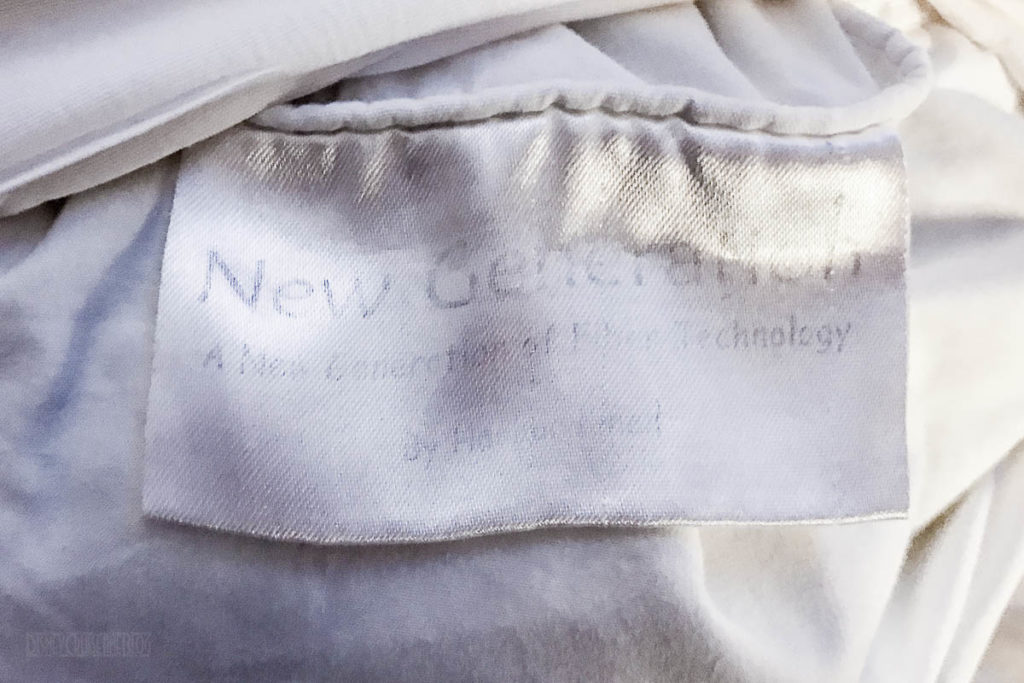 A new generation of fiber technology my stern, these pillows and I do not get along. If not for the motherly rocking of the ship, I probably wouldn’t have fallen back asleep.