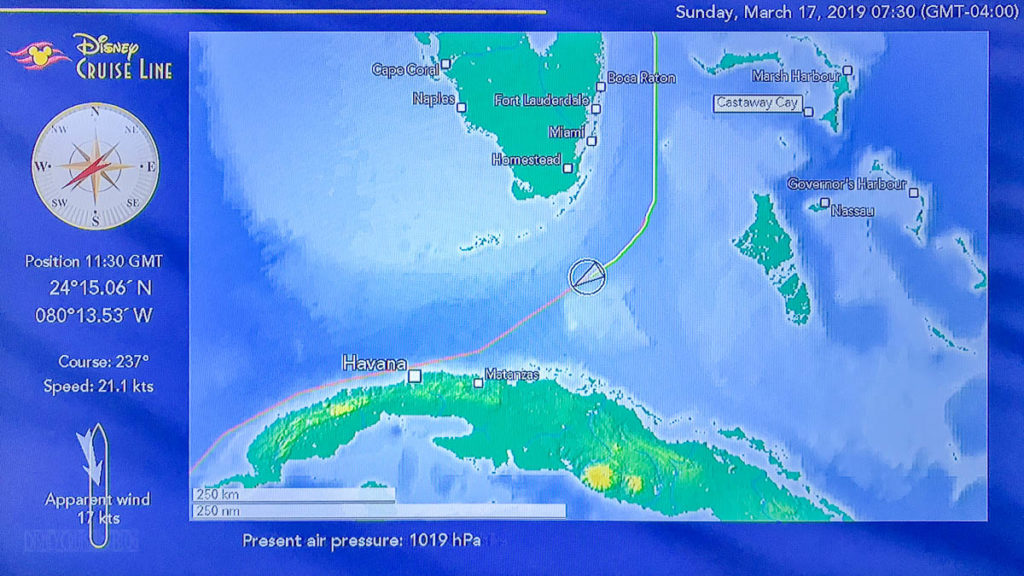 Sailing around the tip of Florida is quite exhausting. I didn’t even hear Emily leave for the gym this AM. Today, we are sailing just north of Cuba (where they did the Today show long ago) on our way to Cozumel, Mexico. As I mentioned last night, the Personal Navigators are no longer being delivered to the staterooms with the evening turndown service. Thankfully, Isabelle was more than willing to go down to Guest Services to get us 2 copies to plan out our day. Upon her return she declared she had some bad news to share. The Personal Navigators are not out for guests to pick up as they please and are only available if you stand in the Guest Services line which for some reason always has a line. I digress, the bad news is that they would only give Isabelle one Personal Navigator. I eventually made my way over to guest services to get a schedule for Emily and I to share. She was kind enough to ask if we would prefer a paper copy in our room to which I couldn’t say yes fast enough. We shall see how this pans out as the cruise progresses.

Even though I am blogging and posting to social media, I try to limit my screen time during the cruise. I cannot be the only one that is glued to a desk and a mobile screen while on land that prefers a break from a device while cruising. Honestly, I feel like Disney is bullying me into using the app which in a way is true given the length one must now go to get a printed daily schedule. I appreciate that the paper copies are still available, but why the additional hurdle of standing in line? I’m all for the reduction in paper waste and printing costs, but at least keep the schedules out in various places around the ship for those of us who prefer the old school option. We saw plenty of guests walking around today with paper navigators so we are not the only guests who prefer the paper grid. 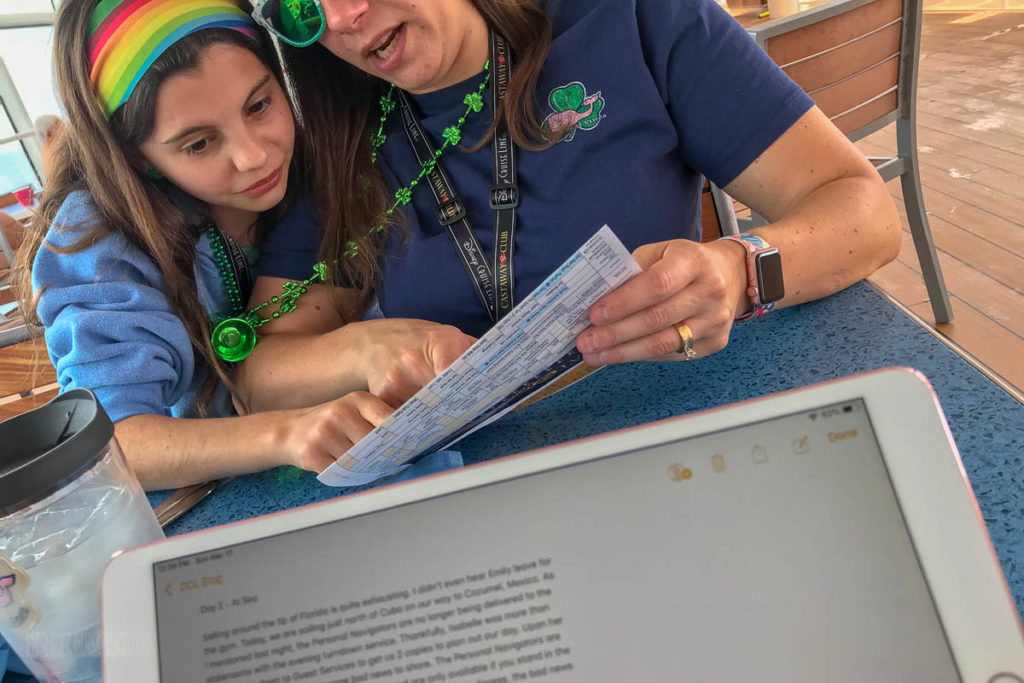 On to today’s fun. I had a breakfast date with Isabelle in Cabanas, while Emily showered. She grabbed a banana and hot tea on her way back from the gym. I had some coffee while she ate breakfast. I opted for a small bowl of fruit because its best to arrive at Palo “Champagne” Brunch with an empty stomach. While we were in Cabanas, Emily started to watch Infinity War in the room.

Our server, C from South Africa was fantastic and the food was great. I think it safe to say, Palo is no longer on my… lets go with ‘meh list’ to keep this PG. Our last few dinner and brunch experiences have been enjoyable after what seemed like a year or two of sub-par food. 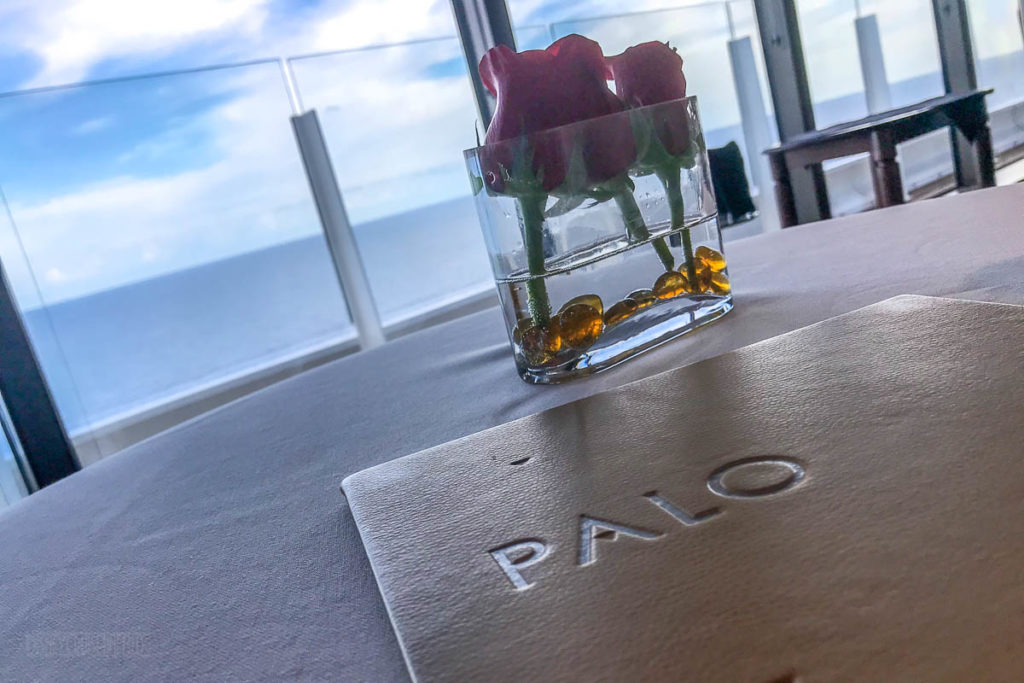 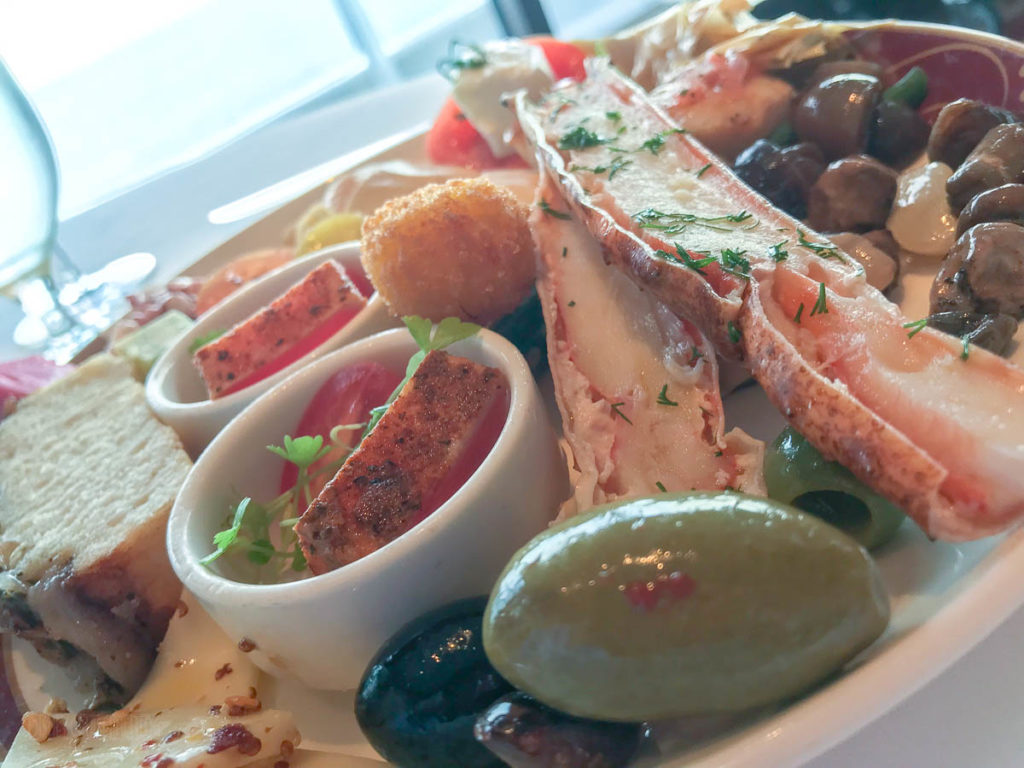 Longtime Palo fans will recall the grape and gorgonzola pizza. It was technically removed from the menu a couple years ago, but they have grapes, and they have gorgonzola…. 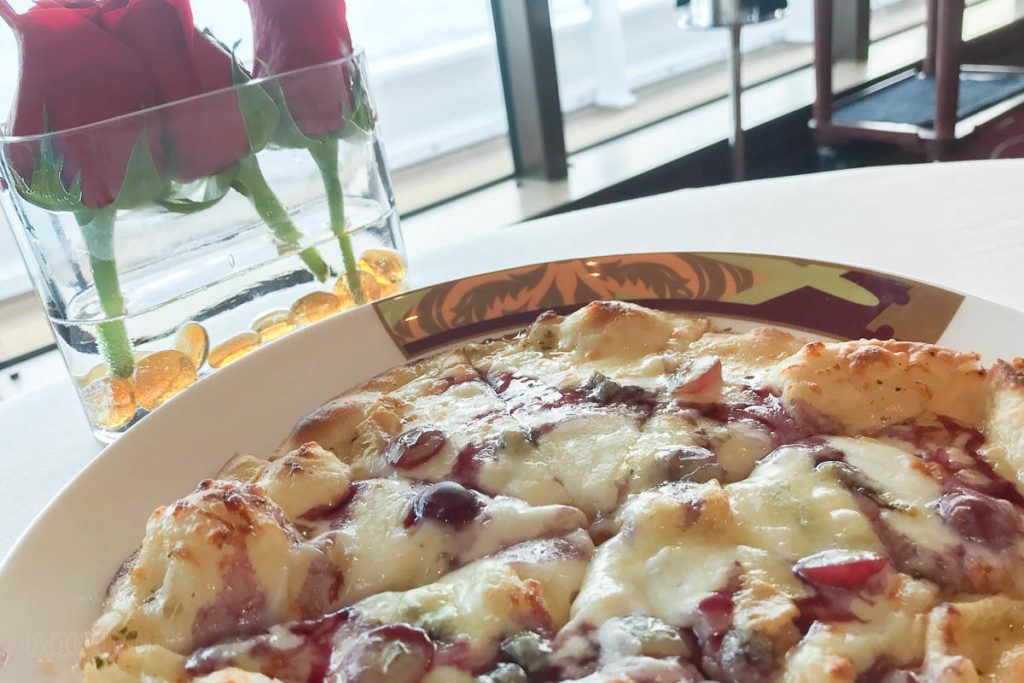 When your server offers grape and gorgonzola pizza you say YES, jump out of your seat and give him a hug. 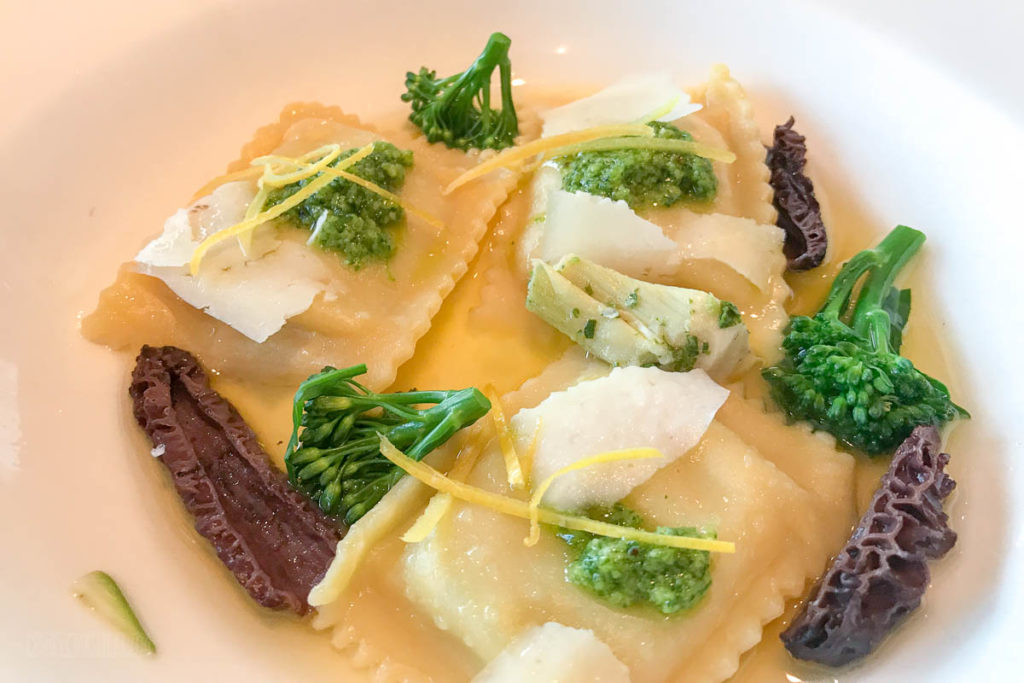 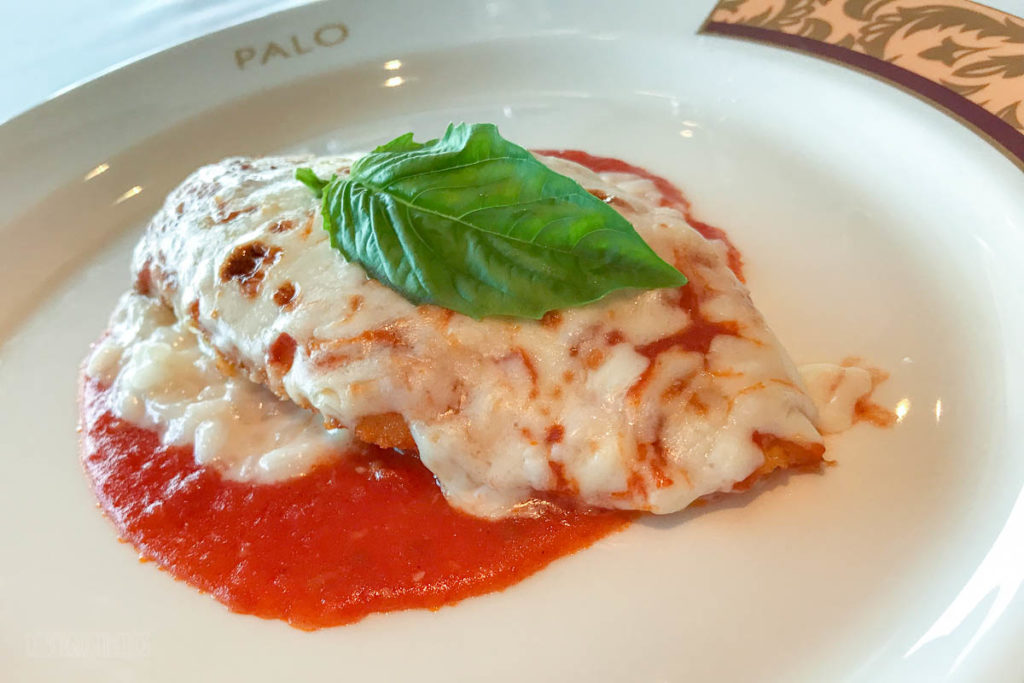 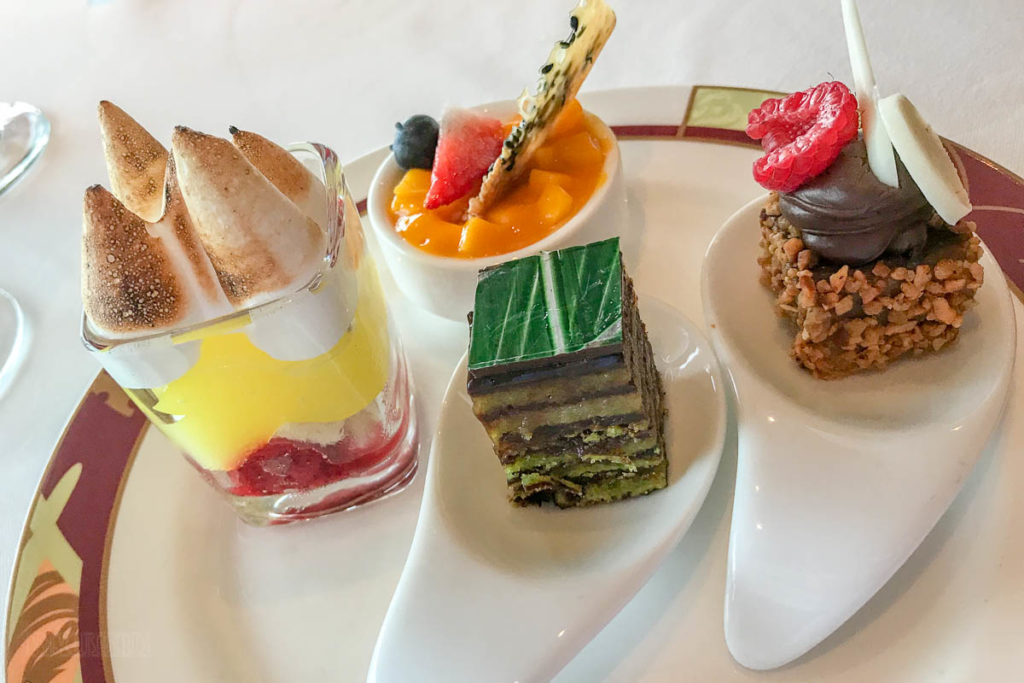 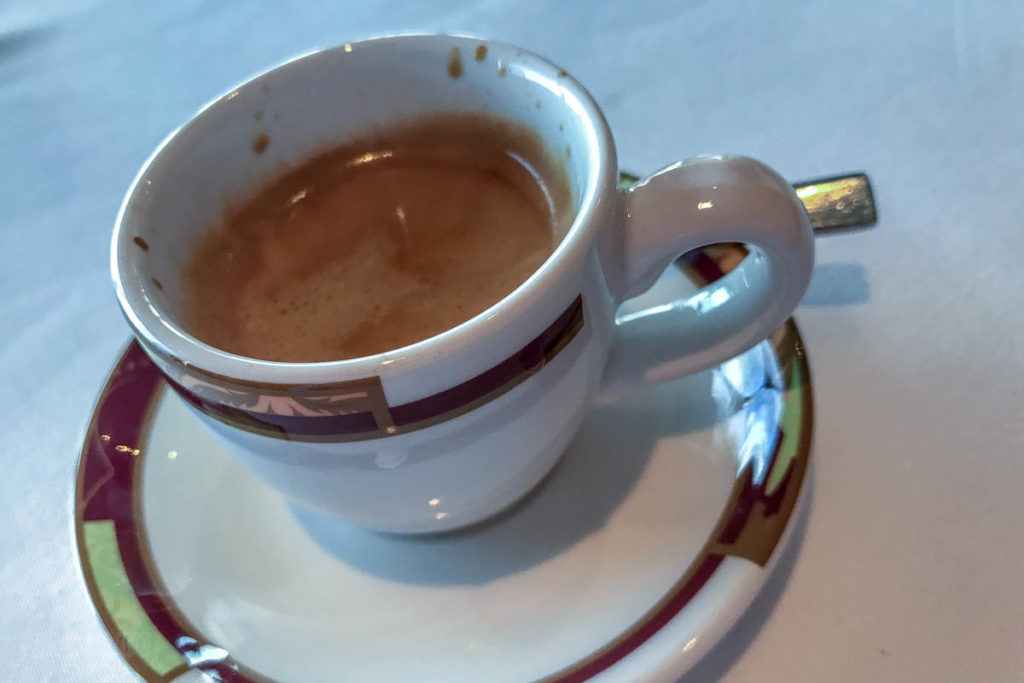 We met back up with Isabelle to begin St. Patrick’s Crafting Day at Sea. Up first was paper crafts in The Tube, a perfect venue for these types of activities. The Tube offers plenty of tables and room to spread out. This was a fun 3D paper craft where we made Mickey with a pot-o-gold! 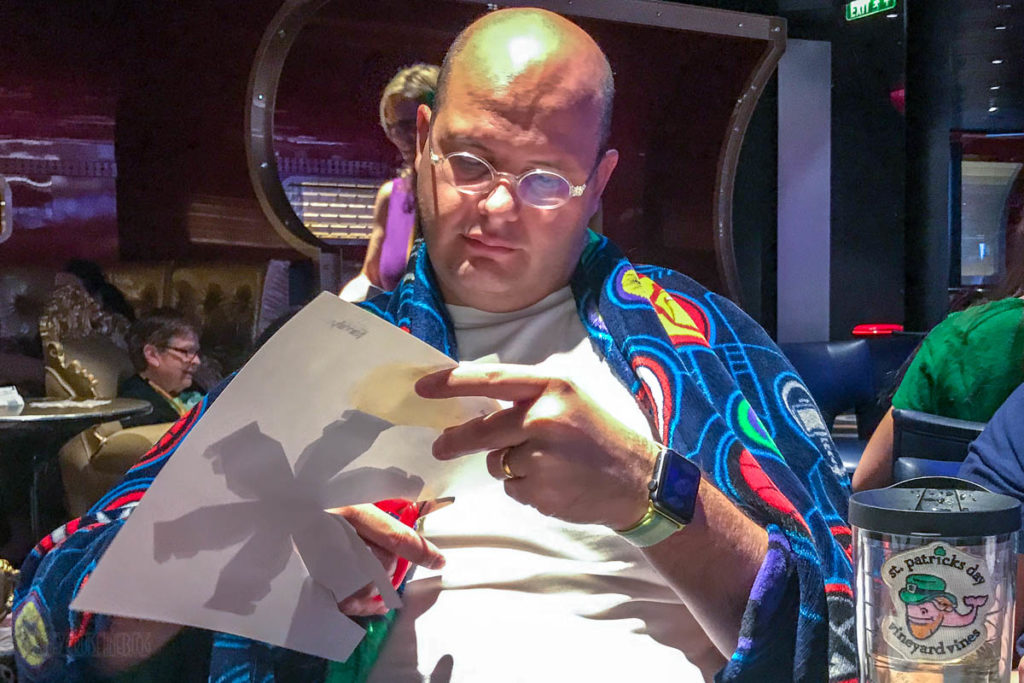 YES! That is a Marvel Day at Sea blanket and I’m FREEZING 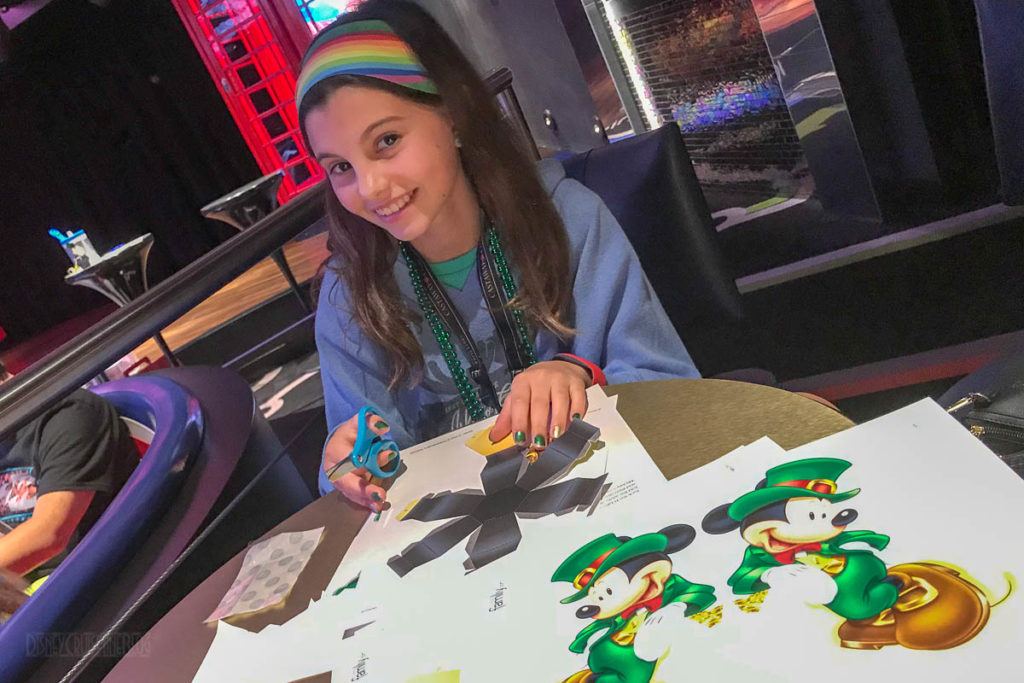 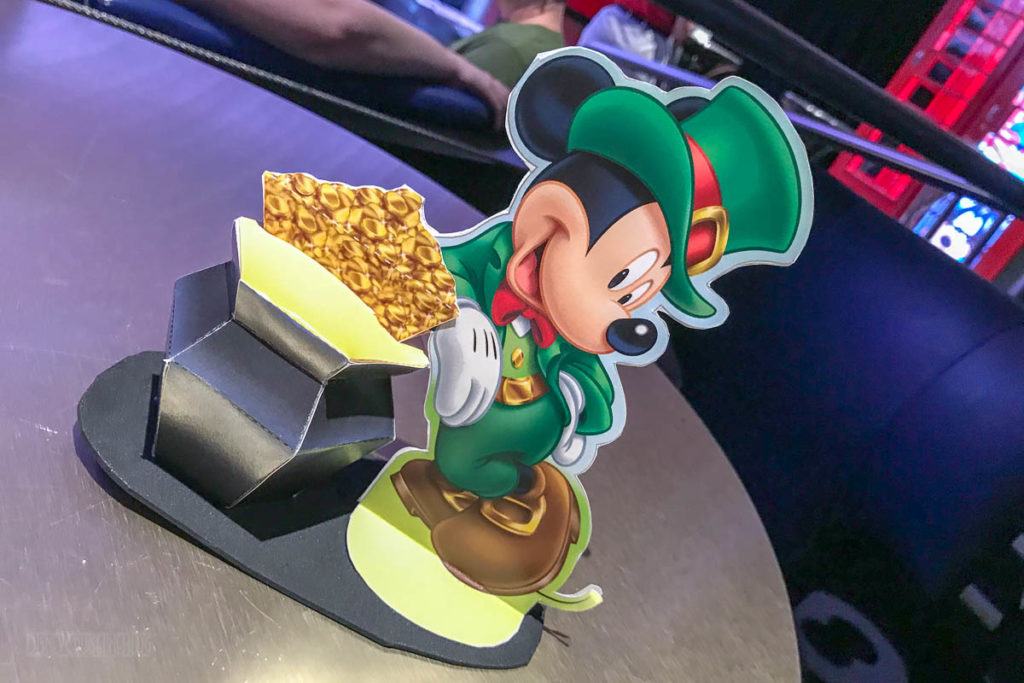 We joined Isabelle up on the pool deck while she ate lunch from Cabanas. We were seated next to the new the permanent pool bar and I couldn’t help notice they were offering snow cones! I will report back on those later. 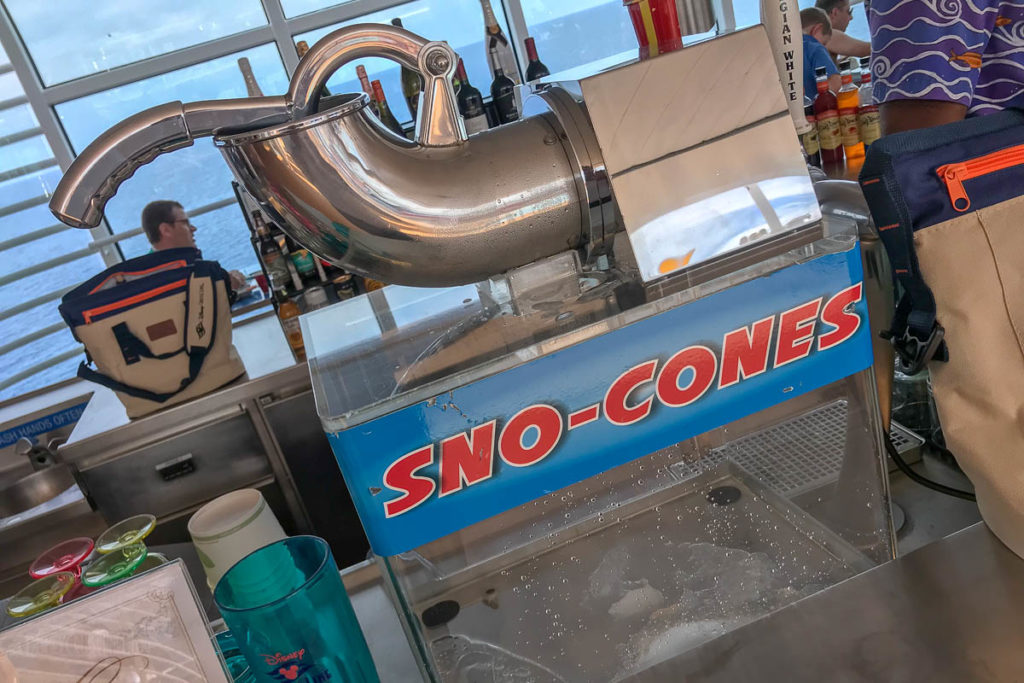 Additionally, there were quite a few people asking for green beer and at least half walked away without making a purchase.

Next up on the agenda was door hangers in La Piazza. Isabelle made an really cool UP inspired door hanger as well as one with Captain America’s shield. 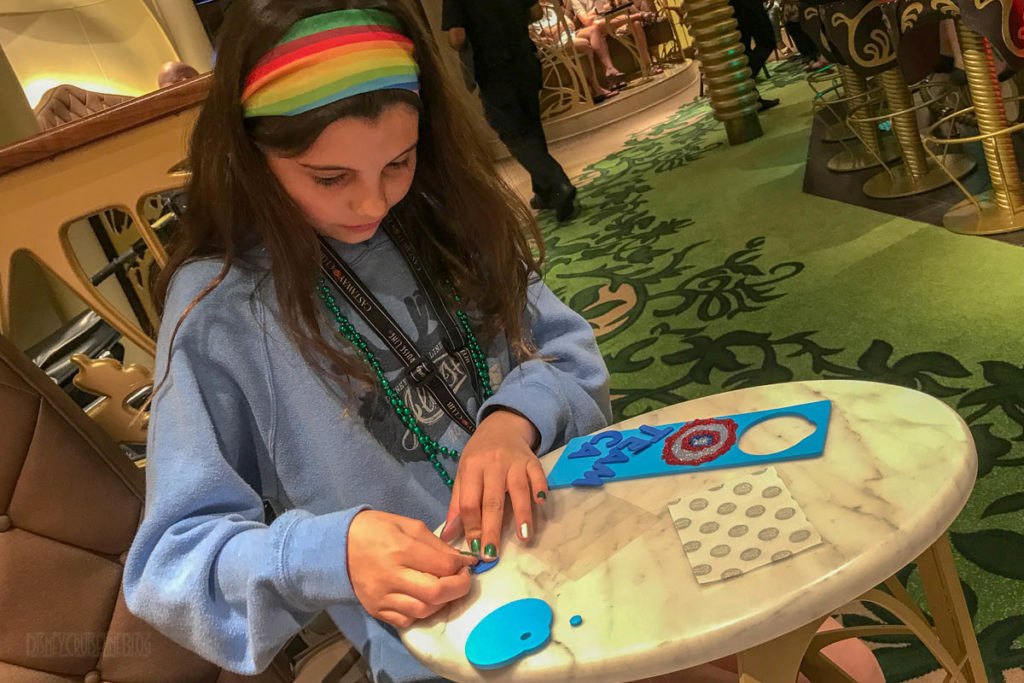 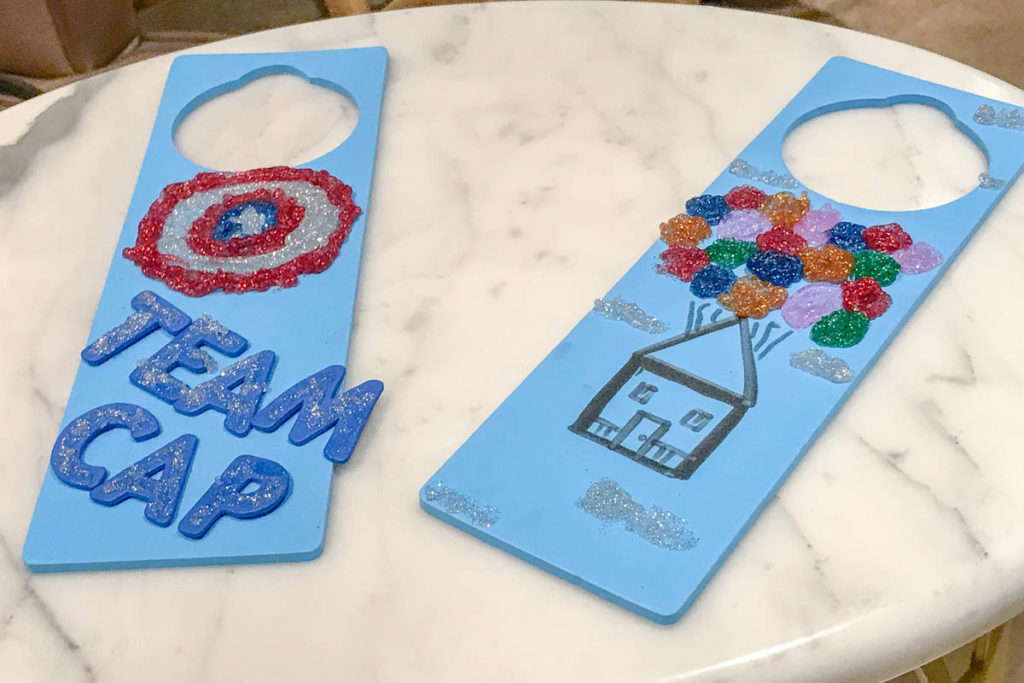 We had a lull in our activities, so we returned to the stateroom where we finished watching Infinity War. Emily added me to the onboard rebooking virtual queue via the app and I waited for my turn. I felt it was worth heading down to the rebooking deck when I reached the 6th spot. Upon arrival, the rebooking agent was calling names, but no one was there. The virtual line works great, but if you are not there when your name is called you get moved down in the virtual queue. This was working in my favor and I was able to quickly secure a placeholder booking for a future cruise and rejoin the family.

As for the app, you need to keep an eye on it to make sure you get the notifications. We discovered the notifications were also being sent to the Wave phones without any delay. I would suggest grabbing your Wave phone if you are in the virtual queue and are not planning to hang around the rebooking deck. 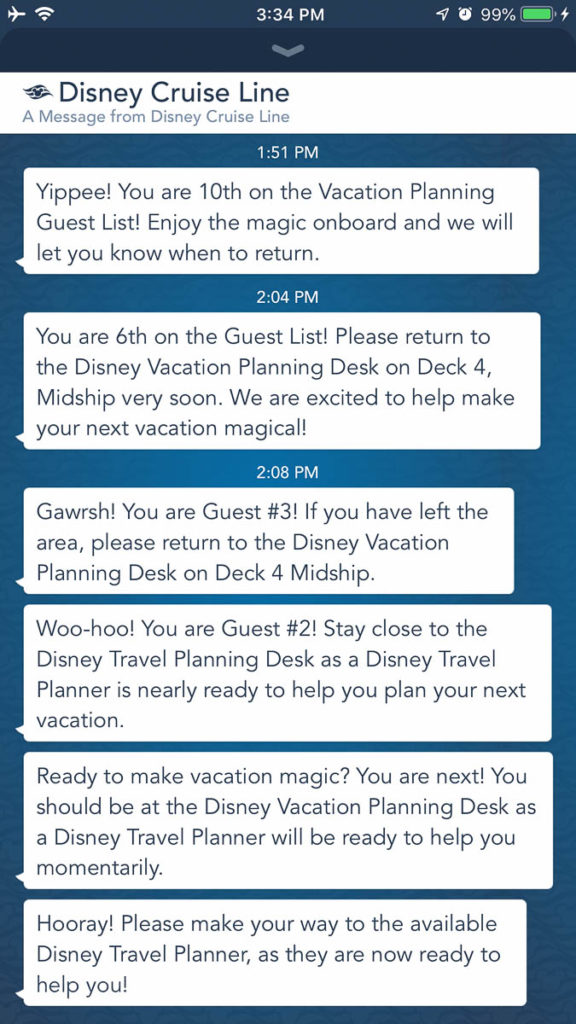 This way you will not miss the notification and will get the notice on when you should arrive at the rebooking desk to avoid any delays for other guests.

When I returned to the stateroom T’challa was battling M’baku for the right to be the next Black Panther.

We continued our lazy Sunday on deck 4 taking in the views of the northern coast of Cuba. It’s been a long time since we’ve been to the Western Caribbean on the Fantasy, but I feel like we are sailing closer to the Cuban coast on this cruise then we have in the past. Clearly this is a sign of future Havana port of calls. I’ll book it now on the Magic out of Miami. 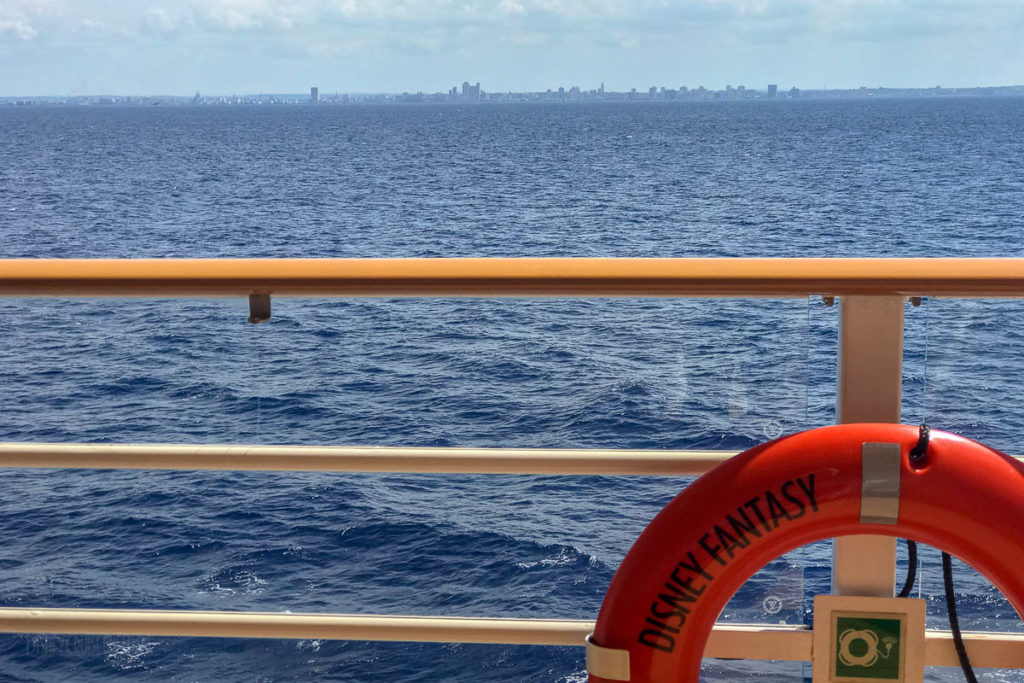 Next, we headed to O’Gills for more St. Patrick’s Day crafts. This time around it was rainbow magnets. When in O’Gills on St. Patrick’s Day, maritime law states you must get any drink you order dyed green. 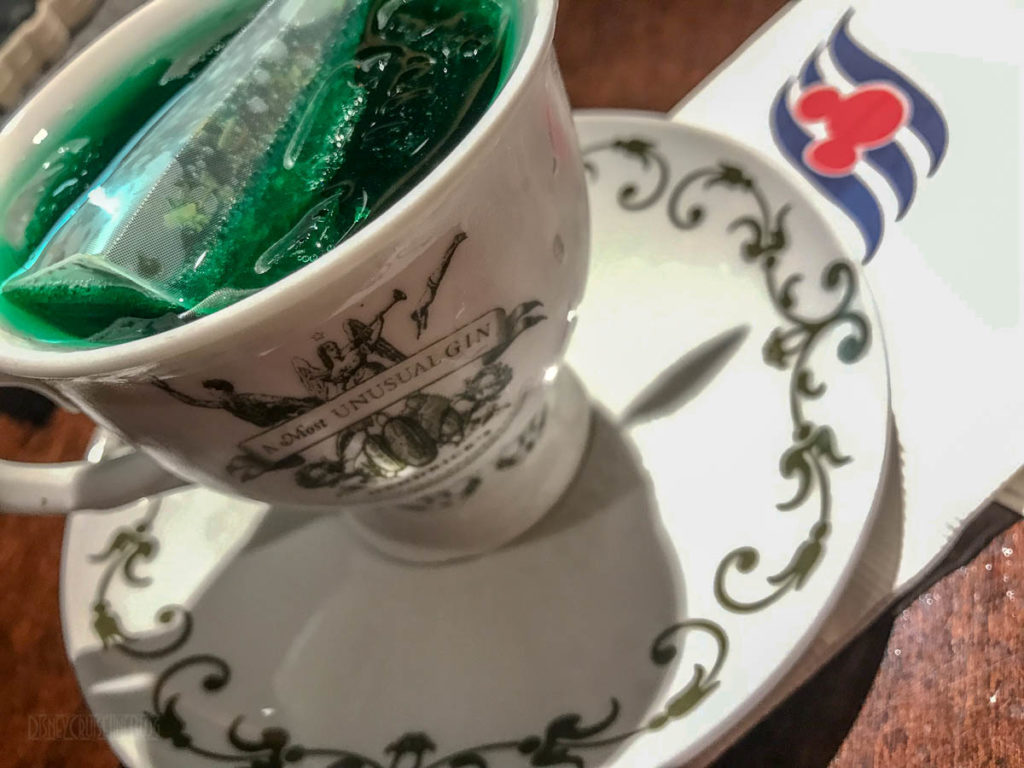 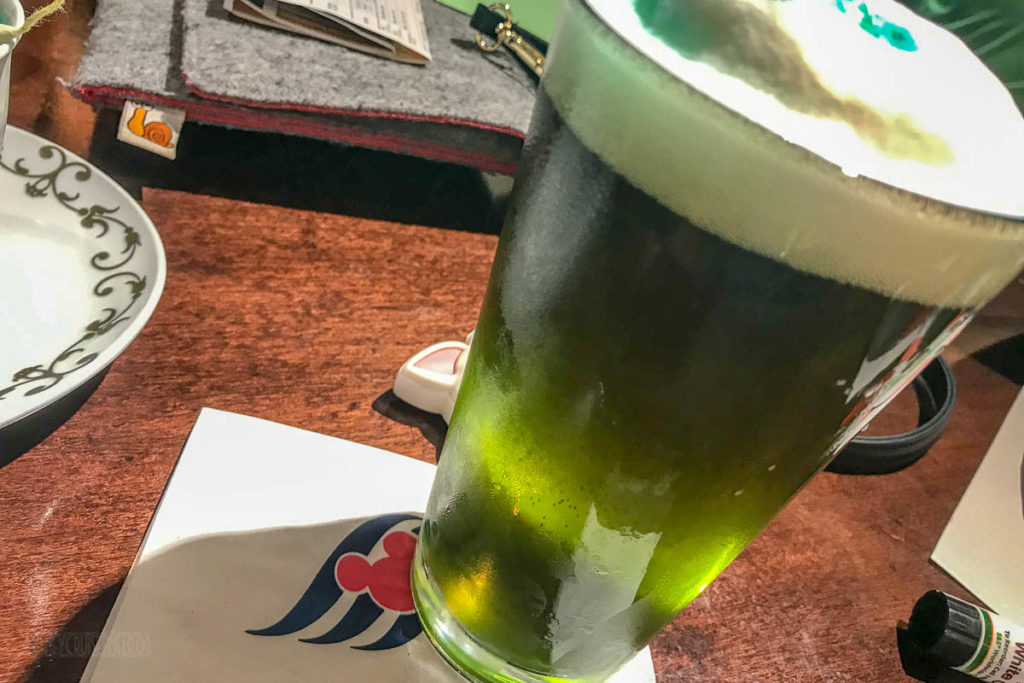 Not only is this bloggable, it is also tweetable, so it was hard to resist. Normally, I am anti-green beer, but they were dying each drink on demand. Nothing was pre-dyed meaning you could order any drink or any beer and they would make it green.I had the O’Gills draft & Emily had the Gin Tea Tonic.

Around 4 o’clock, we split up. Isabelle headed up for… wait for it… crafts, but this time it was in EDGE. That left us with the one any only logical thing to do… Enjoying the fresh air on deck 4 taking in the mountains of Cuba. 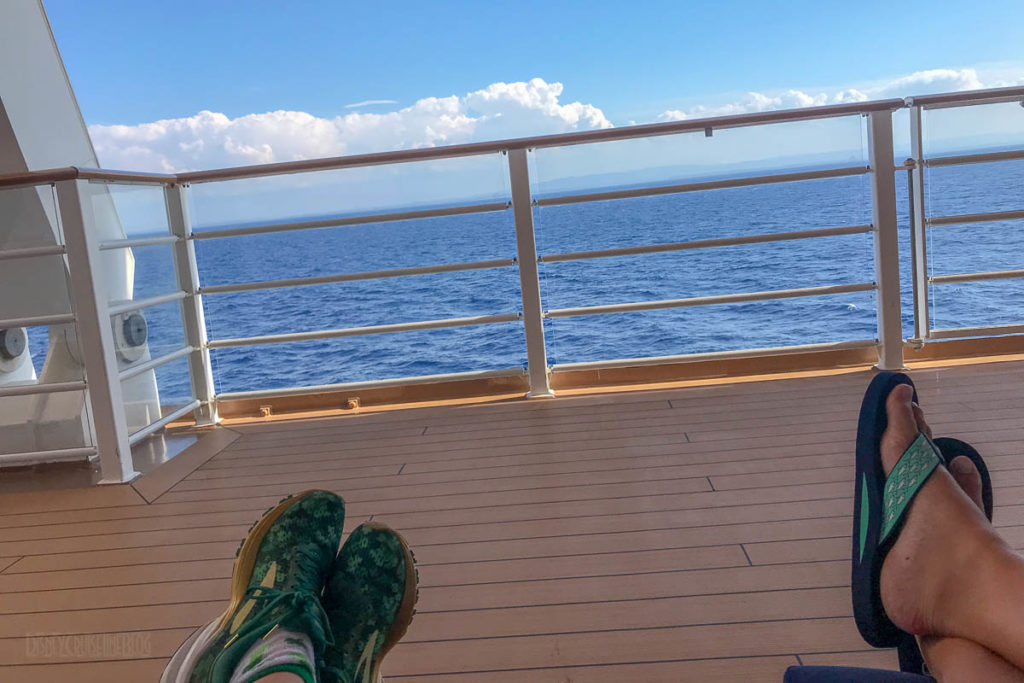 We hung out on deck 4 until Isabelle returned to inform us that there were crafts in La Piazza that she wanted to head into until it was time to get ready for dinner. Tonight is formal night, but before Enchanted Garden we stopped in to the Captain’s reception in the lobby. Tonight they were offering beer, a cocktail, and a mocktail. Specifically absent from the offerings was wine. Thankfully, Bon Voyage was just steps away giving Emily the opportunity to get a glass of Skywalker Rose, which the bartender was kind enough to open a bottle for her the first night even though it is not technically available from Bon Voyage, yet the bottles were on display. 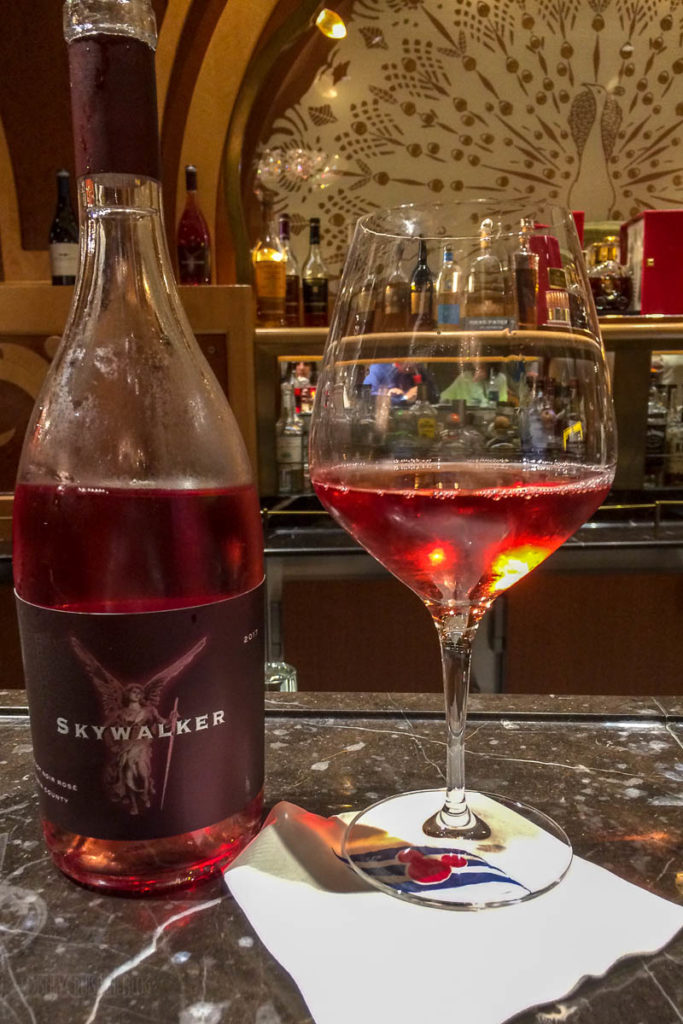 We arrived on deck 2 before the restaurant opened with allowed us time to browse the Vista Gallery which for us this was the first time seeing the gallery since it was relocated to make room for Tiffany & Co. There is a permanent sign that instructs you  to go to White Caps if you are interested in any of the pieces. 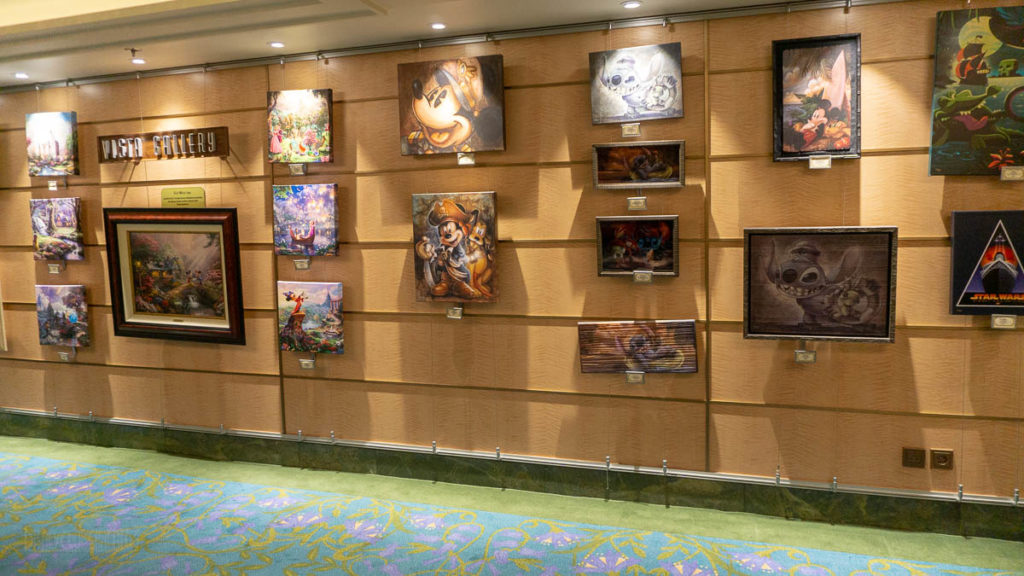 While we were waiting we took the time to take a quick formal family photo. My bow tie is a nod to Mickey’s 90th birthday (thanks Mom!). 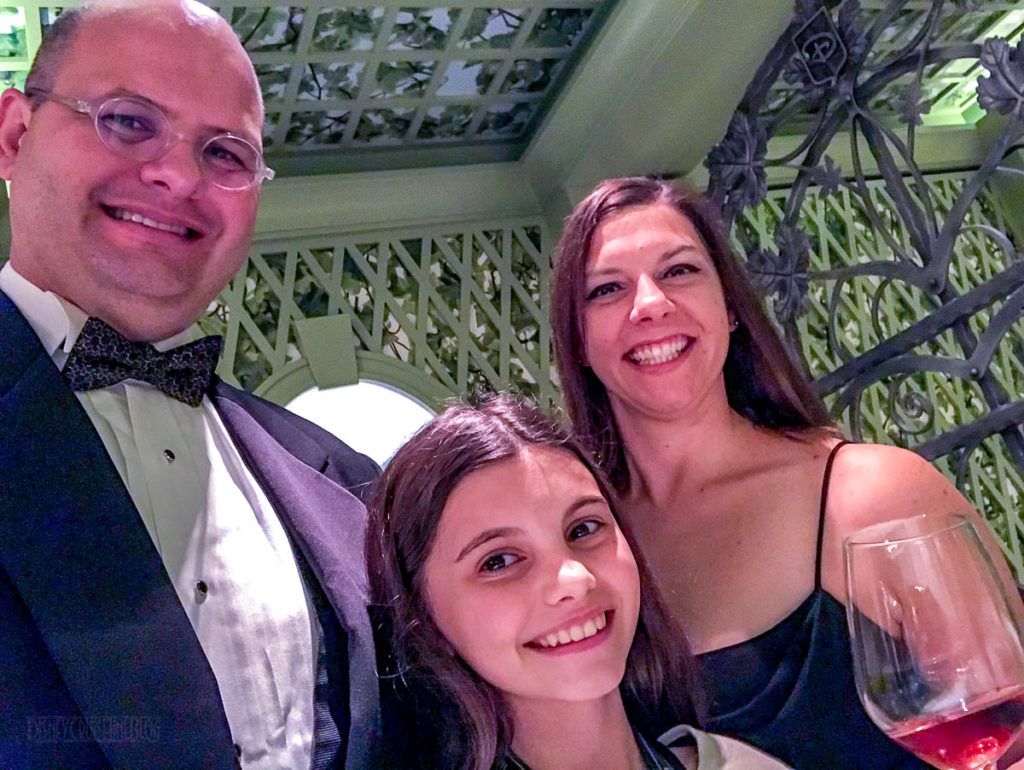 During dinner, Emily tried the vegetarian dish, the Glazed Portobello Mushrooms on a bed of lentils. 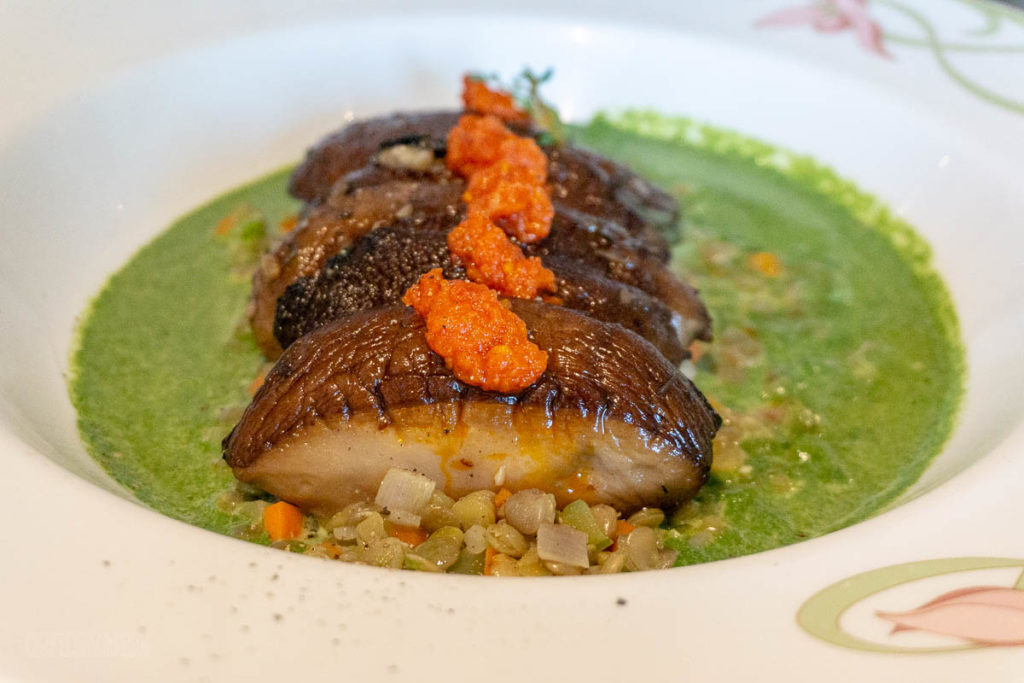 Wishes is the show tonight, but as much as we love the Pinocchio segment, we opted to do go to St. Patrick’s Day trivia instead. The final question’s answer was Darby O’Gill and the Little People which was a great last question given the venue. Trivia was difficult and we did not do very well. 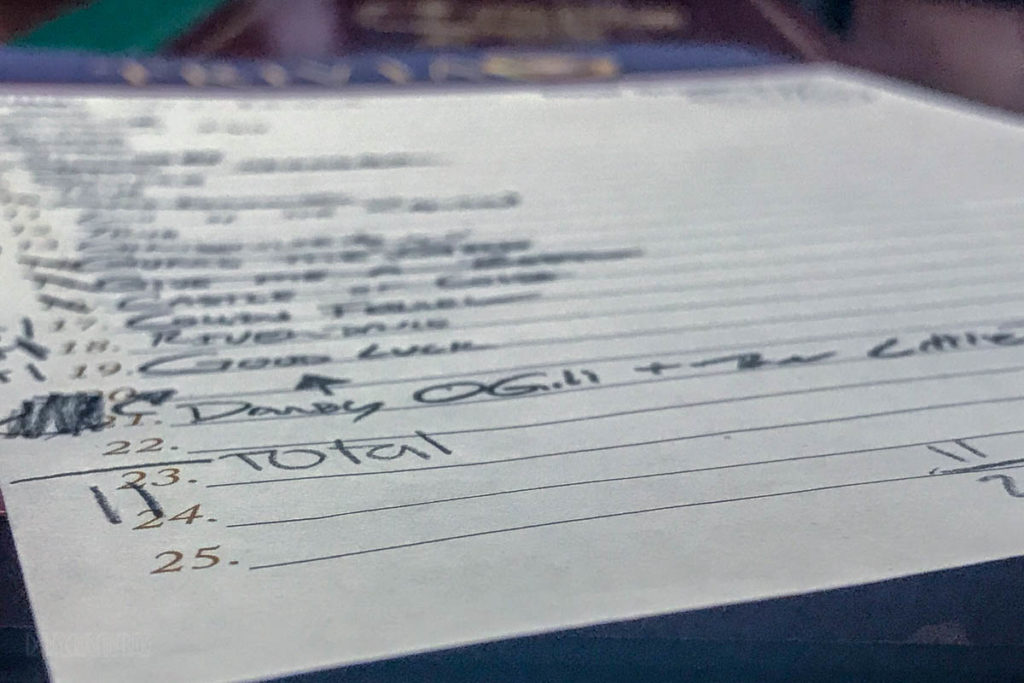 Honesty, the only Disney Cruise Line production I was considering this cruise was Aladdin, but that show is dark at the moment for what I suspect is the refreshing of the show that was hinted at in a recent casting call.

After trivia, Isabelle ran off splitting time between the EDGE and the Marvel Super Hero Academy in the Oceaneer Club. She was excited because her Marvel ID card was ready to pick up. This is such a cool thing they do for the kids and it makes for a marvelous keepsake. I’d include a picture, but Isabelle is asleep as I’m writing this and I do not want to rustle around looking for it. I will do my best to add it later.

Emily and I felt it was time to visit one of our favorite spots, Meridian. For the most part, the bar is quiet making it a great place to wind down. Emily had her typical glass of champagne. A few years ago I started to get into whiskeys, especially bourbon and rye. Disney has been increasing their selection and Meridian tends to have the most variety. I’ve spent the better part of a year looking for a bottle of Blantons after a few people have suggested it to me. I passed on a bottle when I first started to buying whiskey which I will not do again. Tonight was the night I finally decided to try it and now I am likely to buy two bottles the next time i see it for sale. 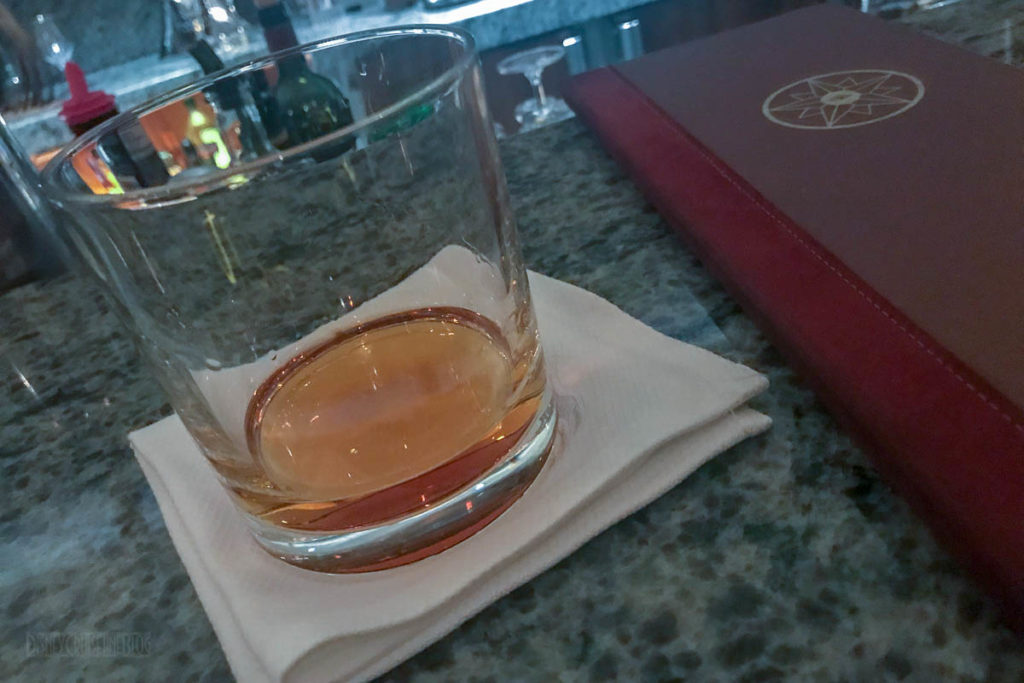 That’s a wrap for today, even though we are gaining an hour, we are still called it a night. Seriously, I just started to get used to springing ahead last week and now we fall back an hour.

Tomorrow is our first port of call, Cozumel, for this 7-night Western Caribbean cruise. According to Captain Thord, we should be approaching the island around 6:30 AM which if things go according to plan, I hope to join Emily in the gym…