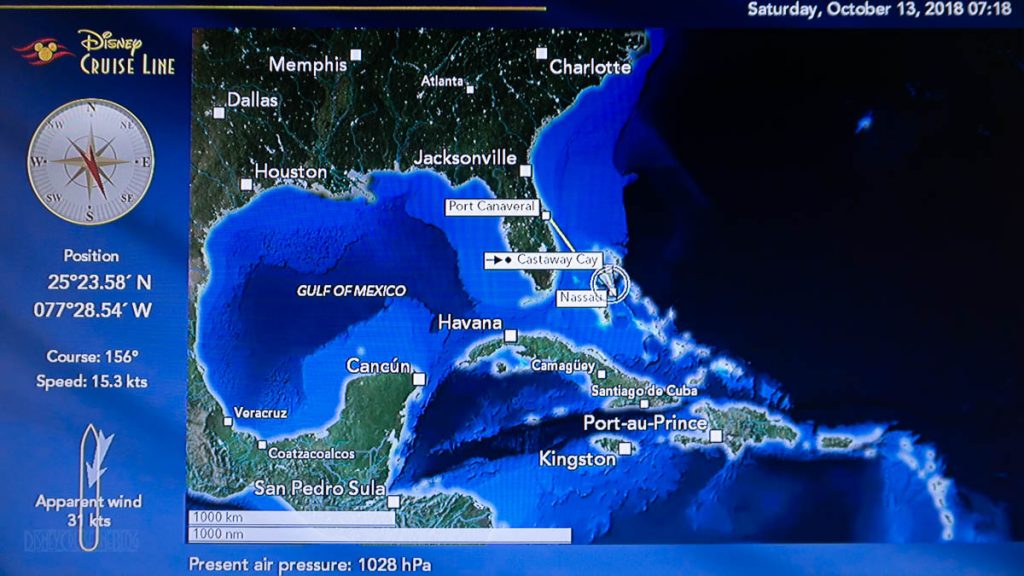 Our first full day started as we approached Nassau. 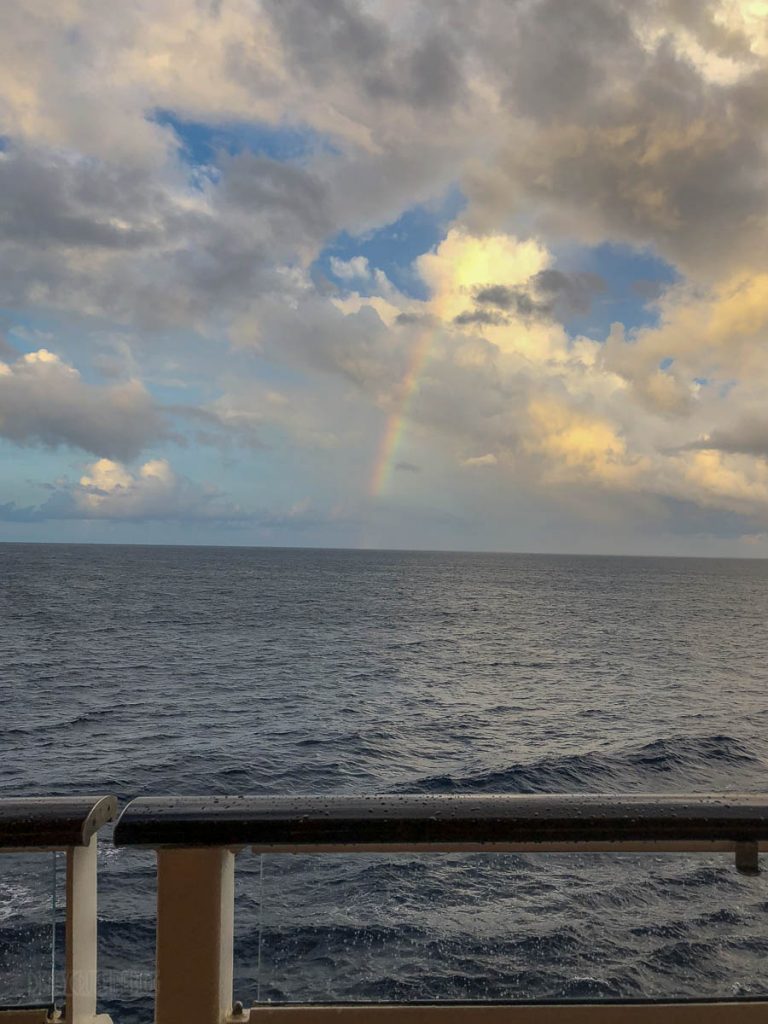 Emily was up early for a date with 22.5 laps on deck 4 as she prepares for the start of the runDisney season. That is 9 miles if you are doing the math. 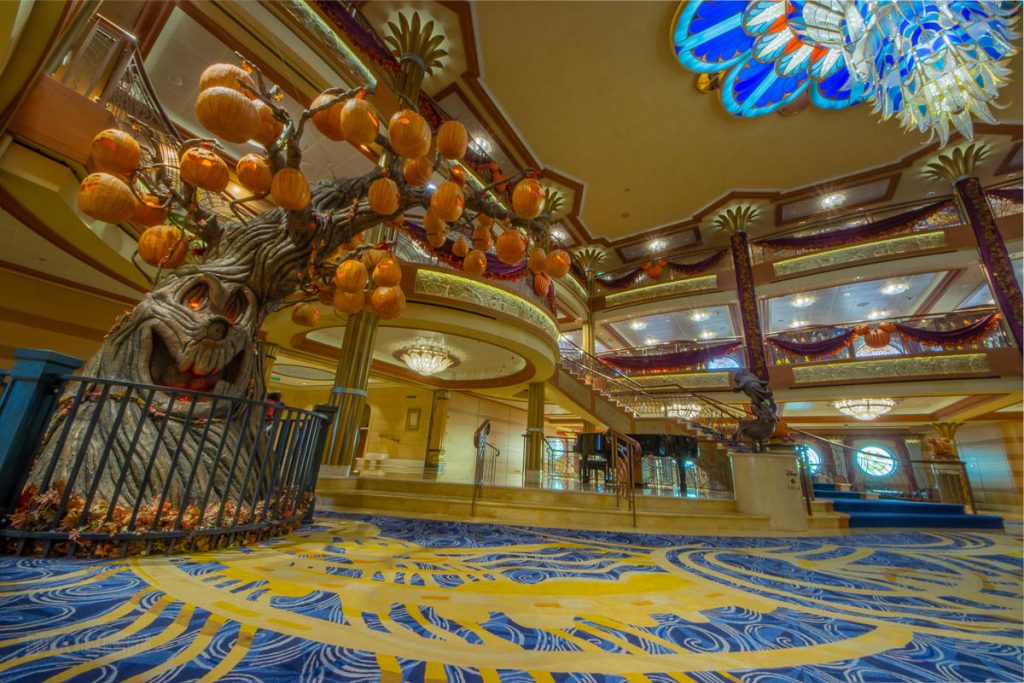 Isabelle and I walked around and took advantage of the quiet morning to take some photos of the Grim, the pumpkin tree in the atrium. 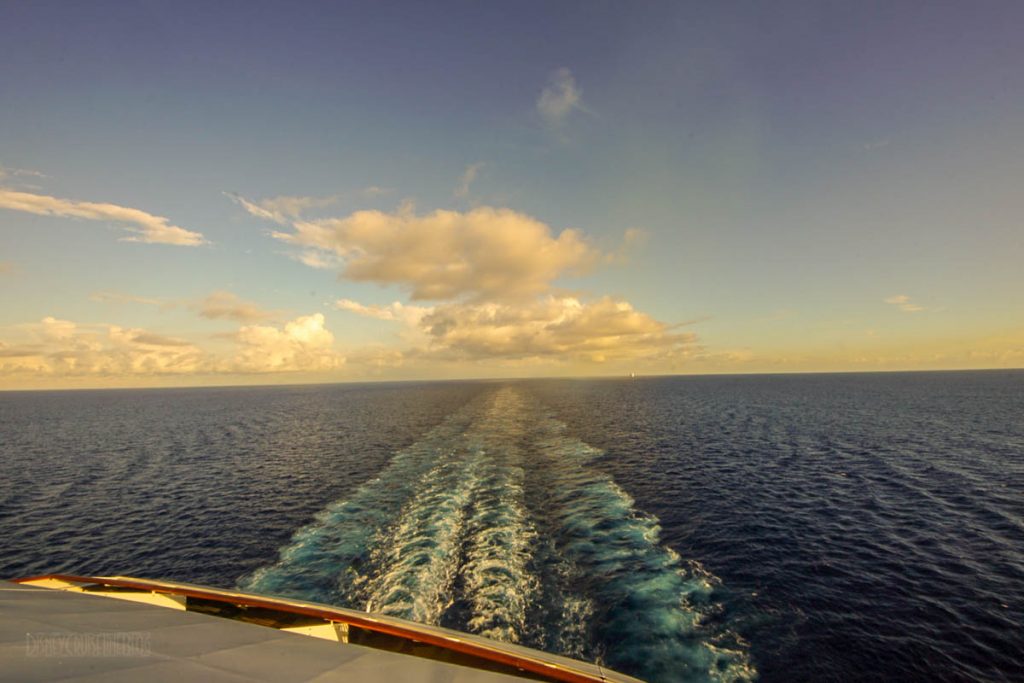 We met up for breakfast at Cabanas where they had one of my favorite specialty breakfast items, the Mexican breakfast wrap. 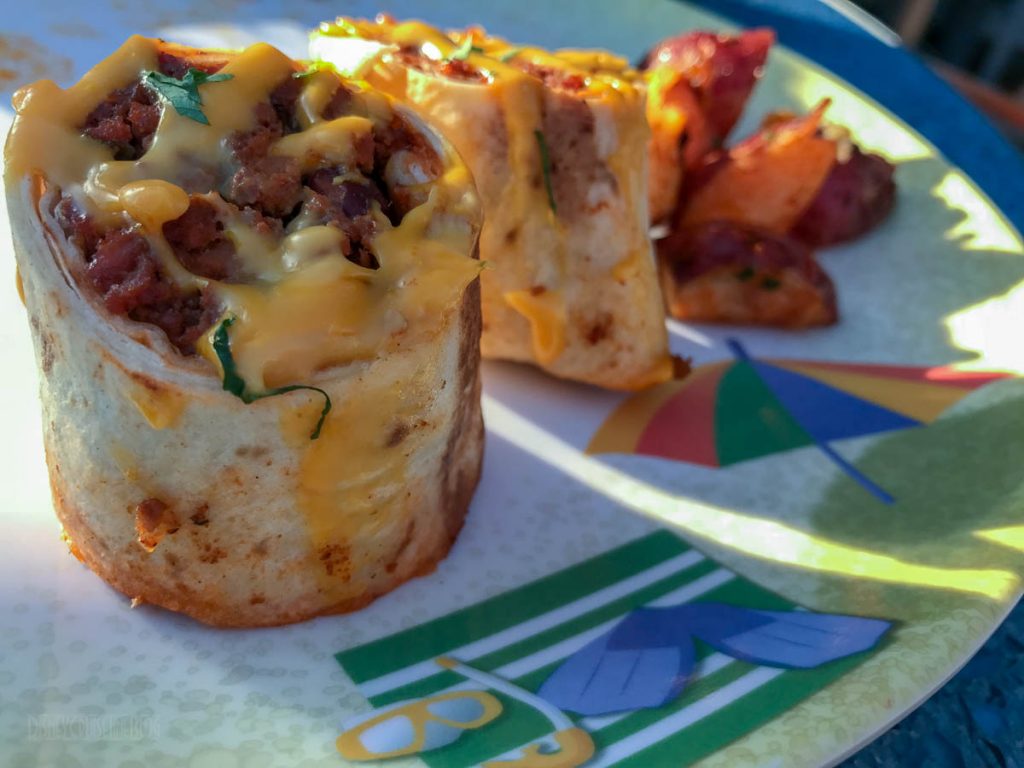 We arrived on the pool deck early and settled into some poolside loungers to watch the Toy Story trilogy on Funnel Vision. Being that this was a Halloween on the High Seas cruise, I am surprised they didn’t include Toy Story of Terror in place of the filler videos. 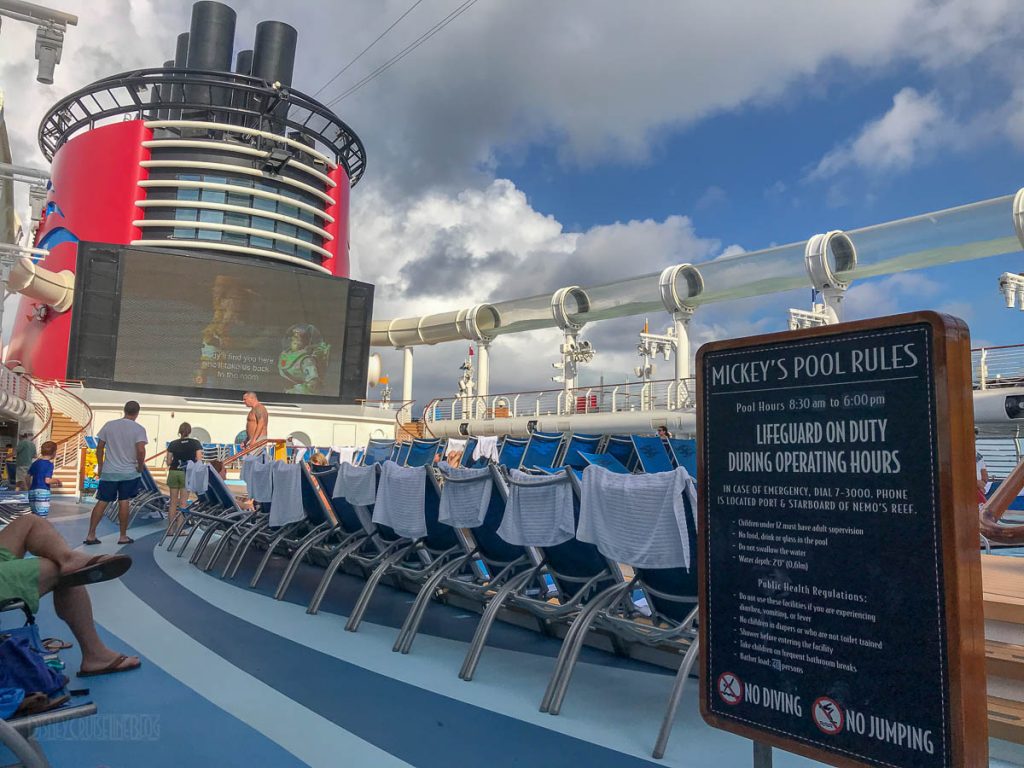 Since we arrived just after breakfast, Emily walked over to Cove Cafe and ordered two of the three fall specialty drinks which are all $5 each. 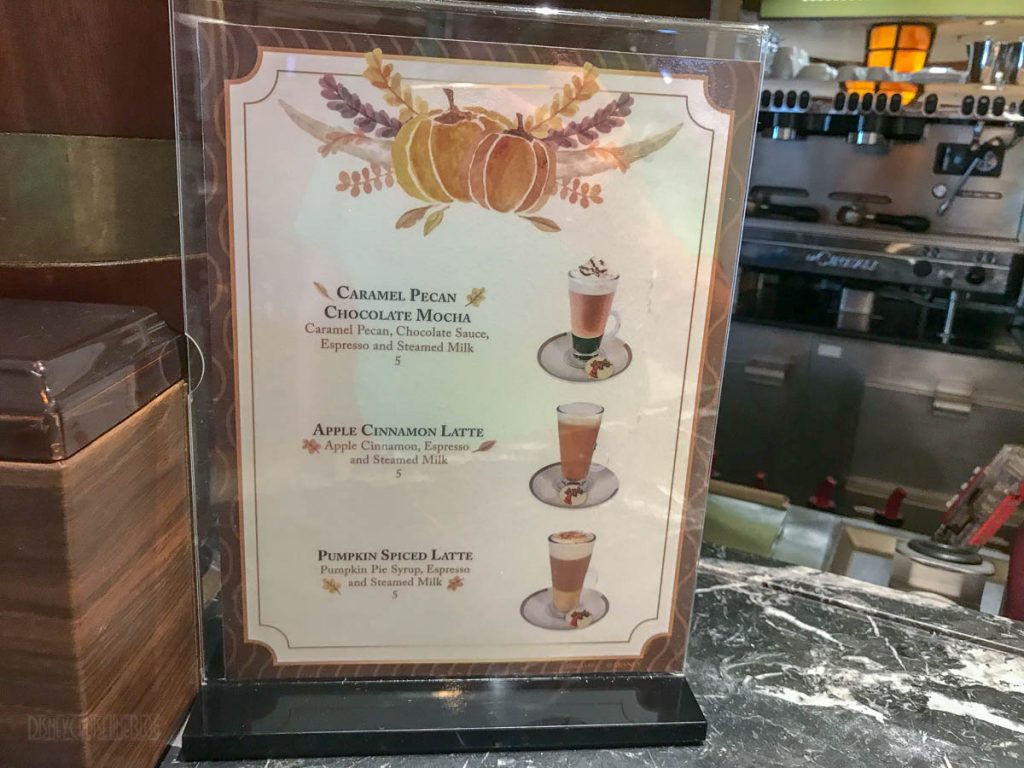 There were some special Halloween on the High Seas treats available as well. 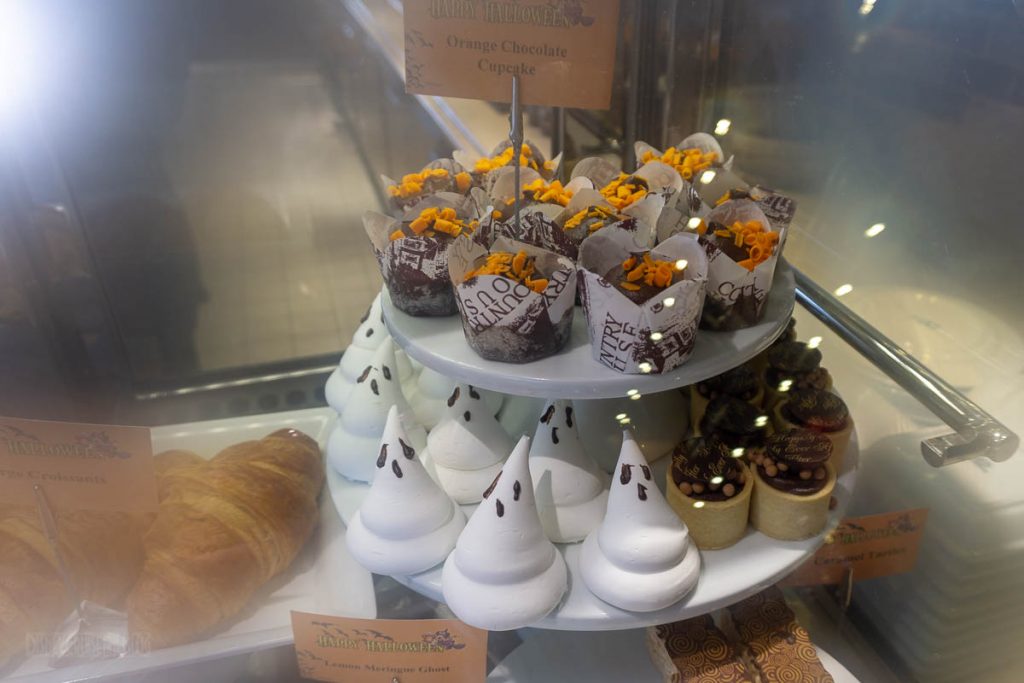 The Apple Cinnamon Latte and the Disney Cruise Line version of the PSL. DCL’s Pumpkin Spiced Latte is not as sweet at Starbucks. The Apple Cinnamon turned out to be delightful. We did not try the Caramel Pecan Chocolate Mocha. The Cove Cafe has a cool machine called the Ripple Maker that print logos on the foam taking coffee art to into the digital world. 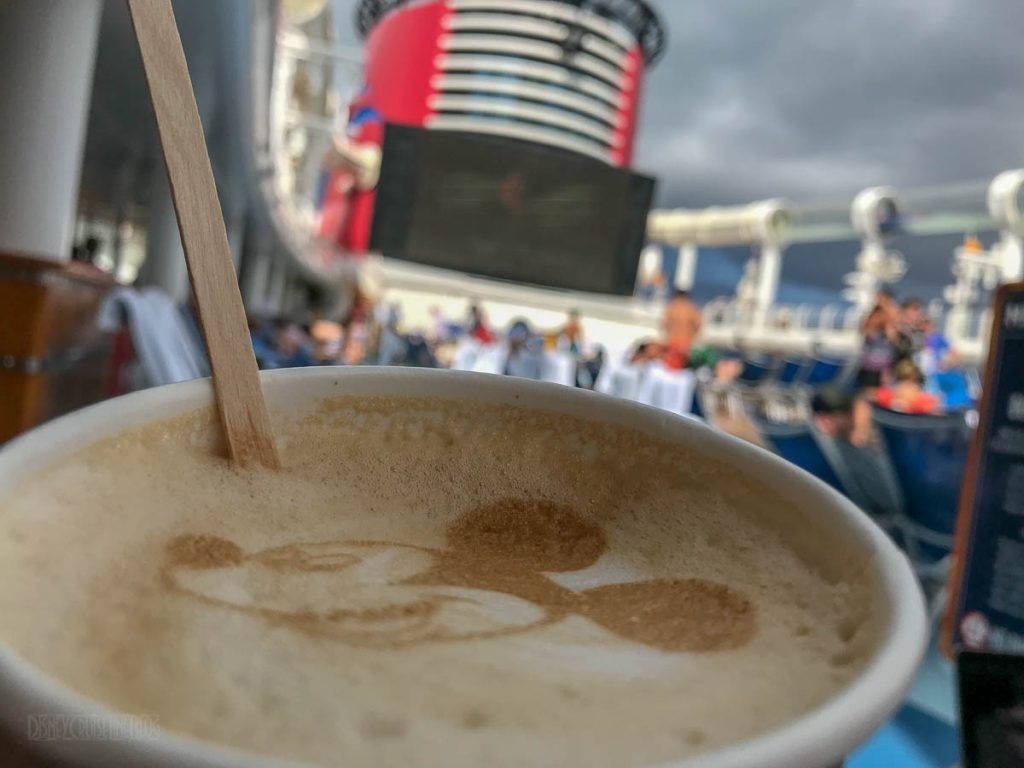 When Emily returned with the drinks, she mentioned she booked a chair massage after seeing the following sign outside Cove Cafe. 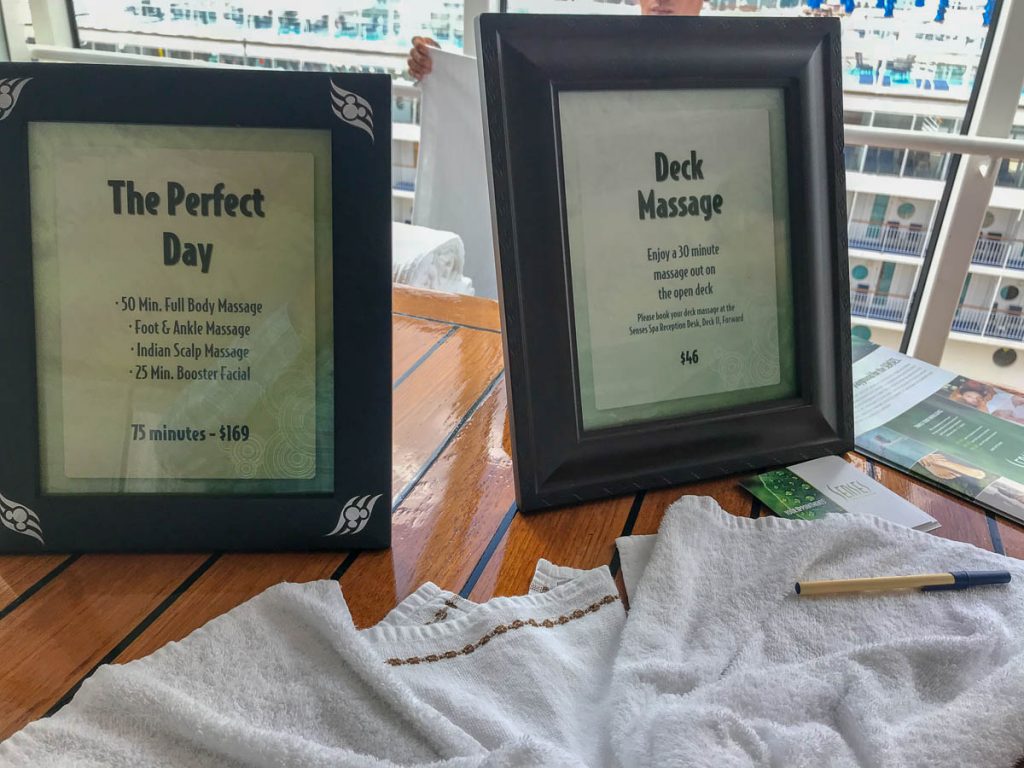 In the meantime, the girls took a spin on the AquaDuck & relaxed in the hot tub.

Emily headed back to the Quiet Cove for her chair massage.

Disney is so good they now have guests up-charging themselves. I kept looking at my watch wondering what happened to Emily, but I was keeping an eye on Isabelle who was pool hopping and watching the morning movies. In reality, Emily upcharged herself turning her 30-minute deck massage into a 50-minute full body Swedish massage in Senses Spa & Salon.

When she returned, we had lunch. We continue to appreciate the specialty pizza offerings; today, they had a butternut squash flatbread. About the only thing lacking was shawarma, which has become a mainstay on the Magic & Wonder. 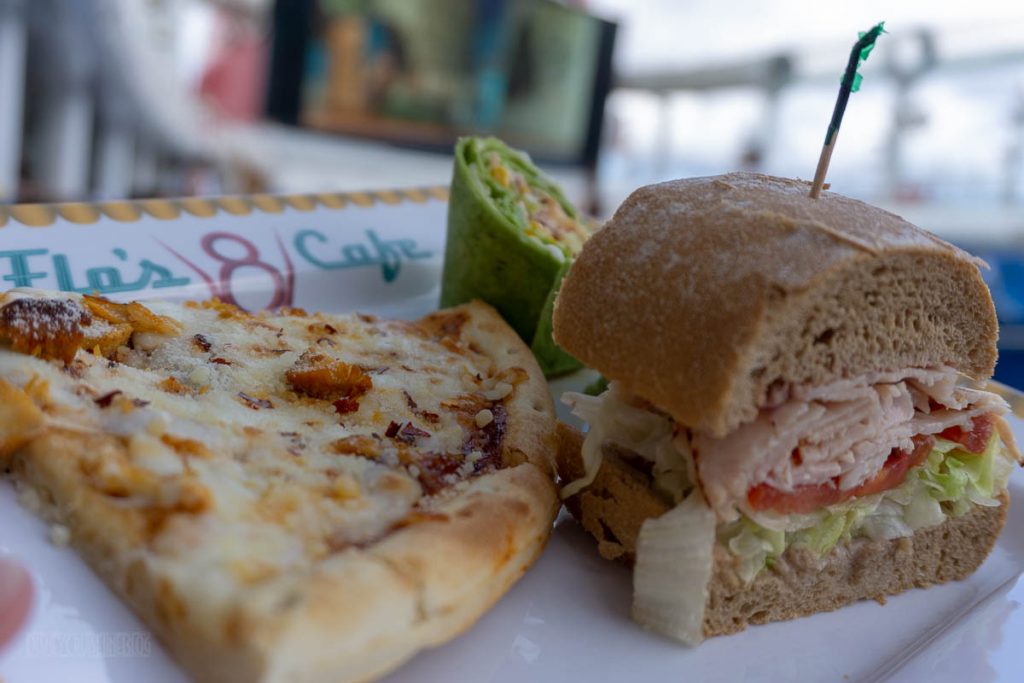 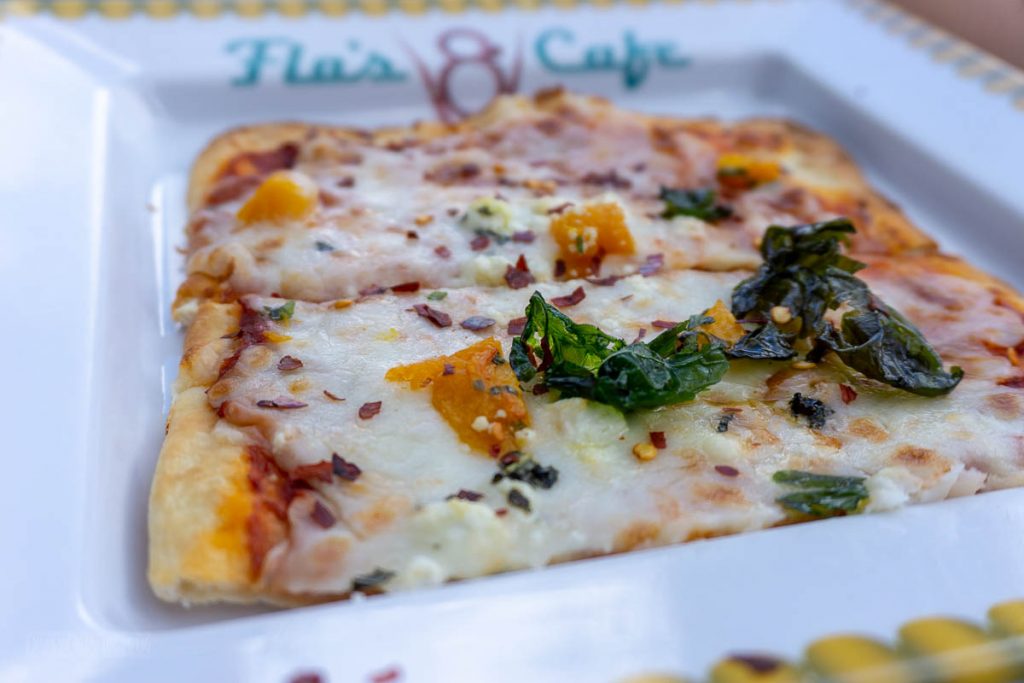 The weather was hit and missing in the morning. Luckily, our chairs were located in a spot where we kept dry through the passing showers which at one point, did cause people to temporarily abandon their chairs. It was fun to watch the impromptu game of musical chairs as some groups took advantage of the reset to upgrade their loungers.

Once the Toy Story trilogy ended, we more or less reached our pool limit for the day. We planned to play a round of mini-golf, but Isabelle was ready to head in. We returned to the room and cleaned up and started to watch some college football in the stateroom. There were a couple of games available in the stateroom and we noticed NCAA Football was listed on the Navigator in 687. We headed down to that area of the ship and split up. Emily and Isabelle played trivia, which was not easy. After trivia, Em joined me & Izzy went right into halloween crafts where she made a Haunted Mansion stretching room inspired bookmark. Click here to download the Haunted Mansion paper carft. 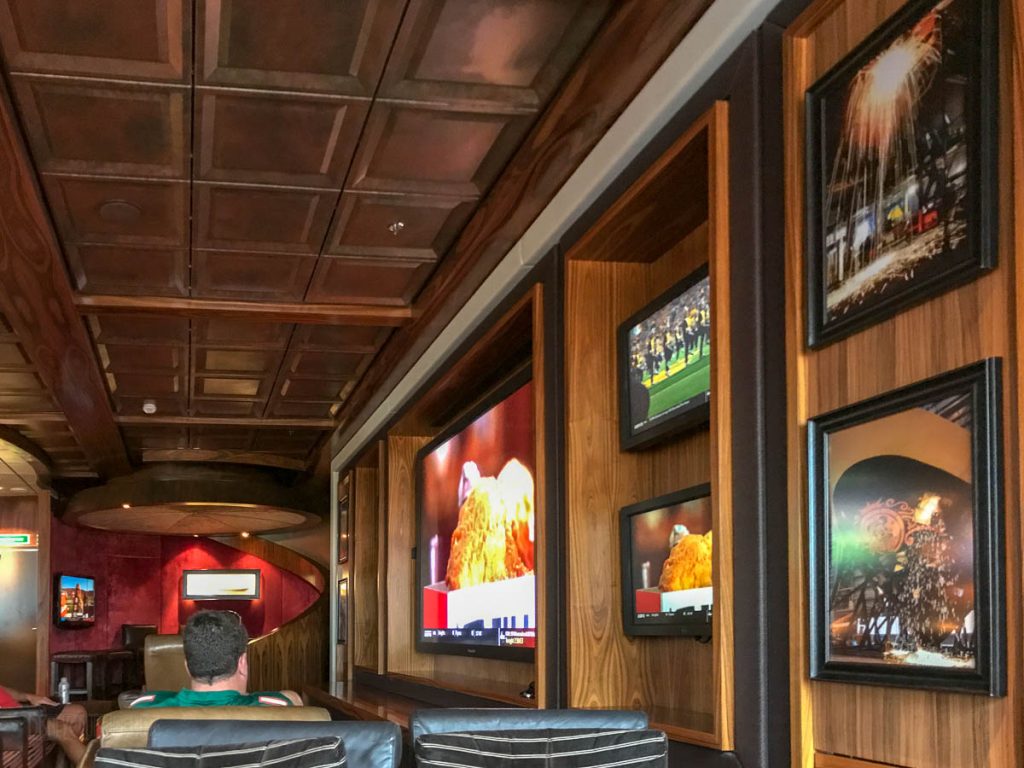 687 was advertising NCAA football has 10 HDTVs, but was only showing 2 football games, which were the same 2 games that I was flipping between in the stateroom. I get it, subject to availability, reception, rights etc. This is Disney Cruise Line, an arm of the The Disney Company which OWNS ESPN. Short of additional contractual restrictions with the NCAA, it is disappointing that the Mouse cannot pull in more games from the WORLDwide leader in sports. Sure, you may need to spend some dollars to show a few extra games in 687, but you are charging a premium price for this cruise. At the very least, you should be able to pull in all games on the ESPN network. Alternatively, have the tech teams map over the SEC games on CBS and those occasionally on FOX. First world problem? Yup, no argument there. I will say, I cannot be the only passenger that would have parked themselves in 687 for the remainder of the evening alternating between the soft pretzel and wings will refilling our beer mugs.

On the subject of beer mugs, there is a Leinenkugel Oktoberfest deal going on. You get a 1 liter beer mug filled with Oktoberfest for $19 with $9.75 refills. There is some mixed information depending on your server. If you have a good server, you can get it refilled with any of the available draft selections, while others limit you to Oktoberfest. Pictured below is a liter of Loose Canon for reference. Your nautical mileage may vary. 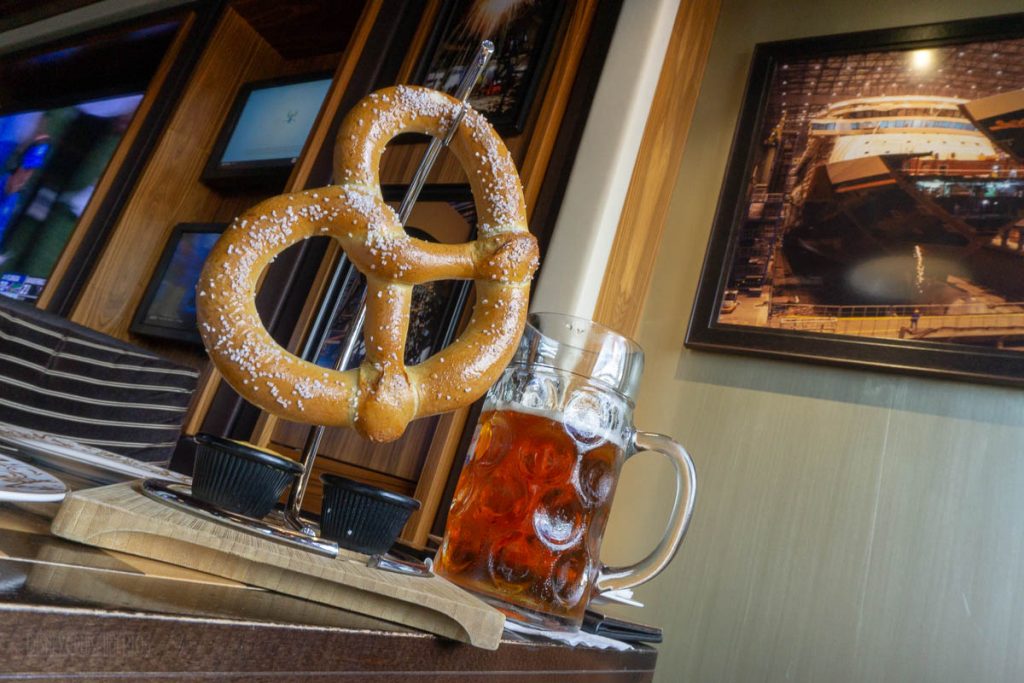 After the early games, it was about time for the popular Halloween on the High Seas trick or treat event. Basically, this is where you can get your candy bag filled in just under 1 lap around the a few floors surround the atrium and Walt Disney Theatre. 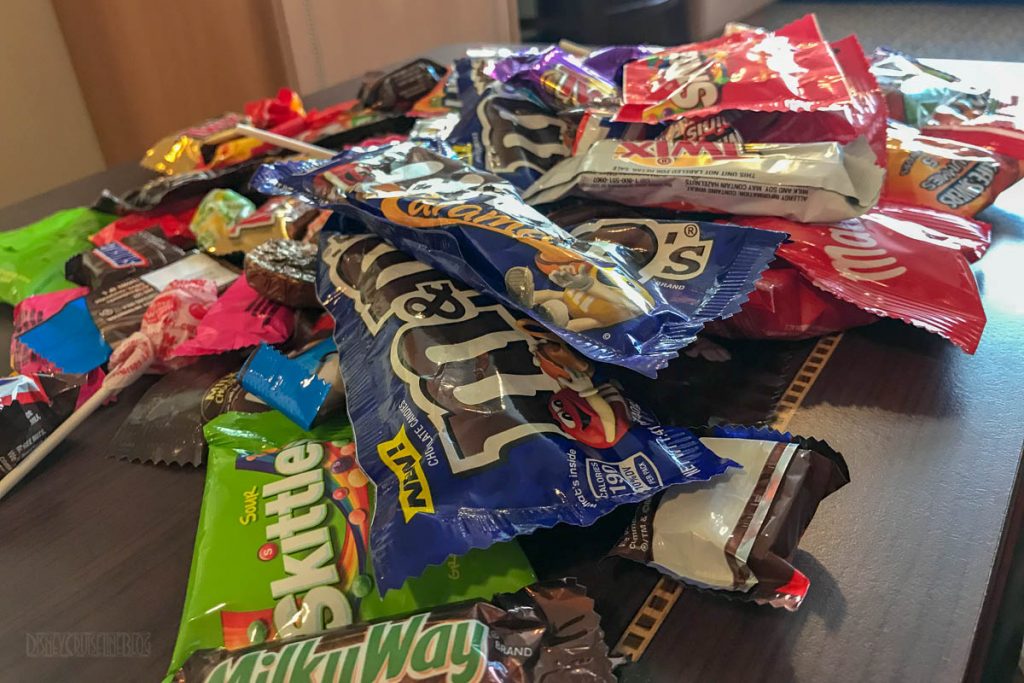 On this cruise, I learned first hand if you lose your KTTW card, simply go to guest services and they will deactivate the lost card and print you a new card. 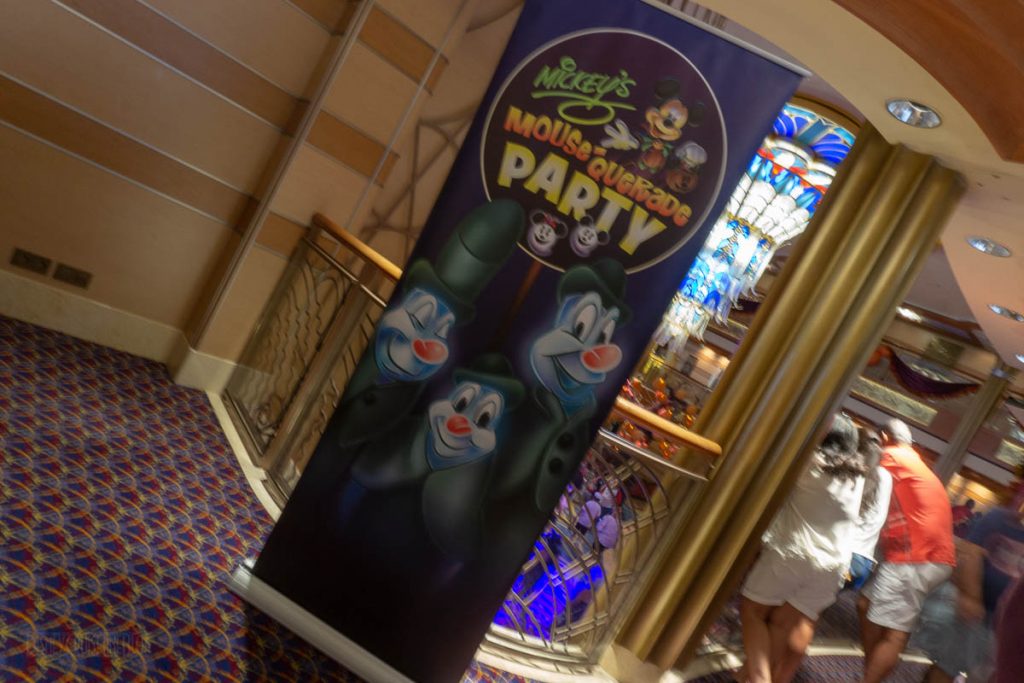 After Mickey’s Mouse-querade party, I checked back in with guest services. I would like to personally thank the guest or cast/crew member who found Isabelle’s lanyard with a watch attached and turned it in. I was able to get myself out of the doghouse – see, it was my fault, I’m the fool that dropped it during the trick or treat chaos.

Since Isabelle collected a bunch of candy, it was only logical to stop and acquire the Oogie Boogie popcorn bucket from the Buena Vista Theatre refreshment stand. I am not sure what we are going to do with it. I can tell you this will NOT end up on eBay. Now, I leading towards using it as a Halloween decoration. 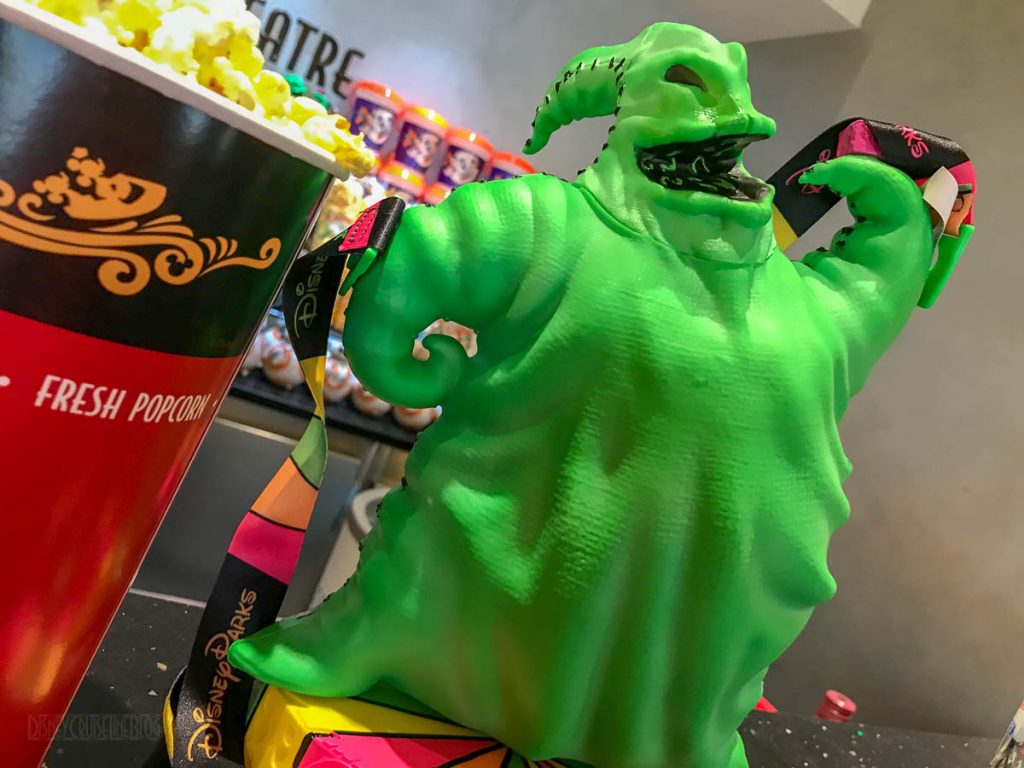 At this point, no one was really hungry for dinner. We split up for a bit. Isabelle continued to her quest to solve Midship Detective Agency cases in between stops in the Oceaneer Club/Lab. 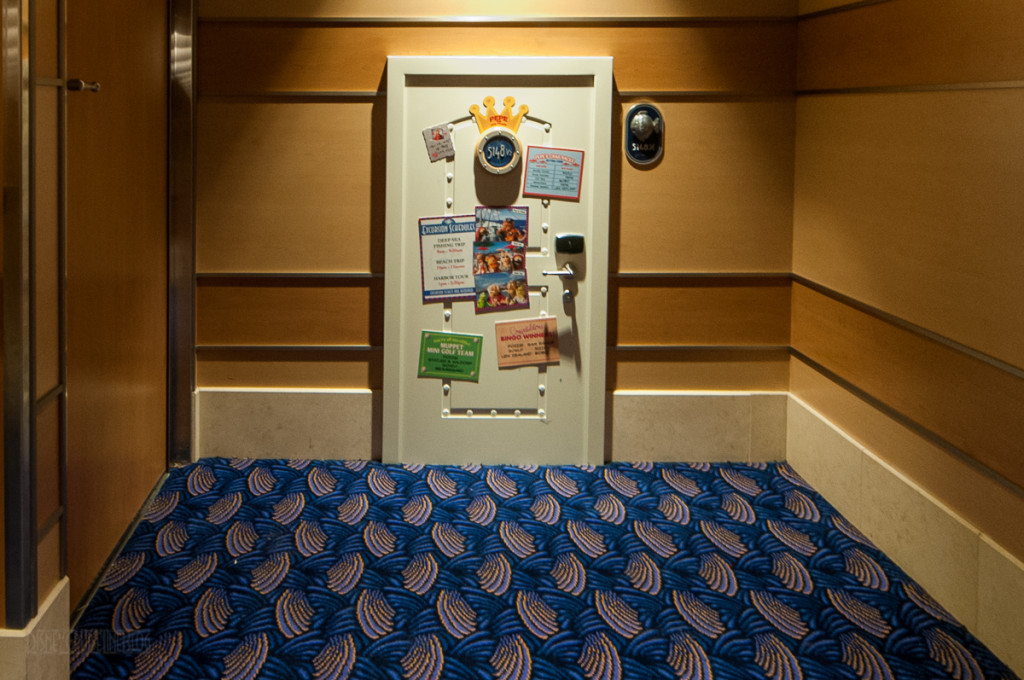 Emily and I headed into Pink. Pink is the champagne bar on the Dream located off The District lounge through the giant bubble. 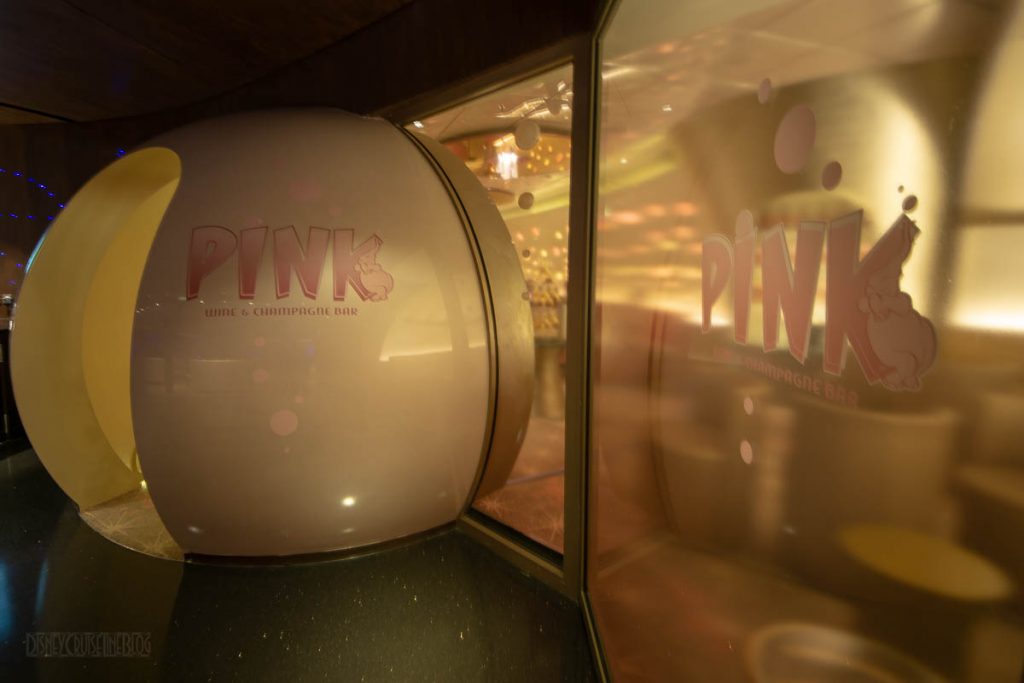 We had a great time chatting with the bartenders. Hey DCL, if anyone is actually reading this, we think it is really low to force an opening member of the Magic to rotate away from his home. Let Angel from the Phillipines go back to the ship we all love. You’d think 20 years of service would give you a choice. 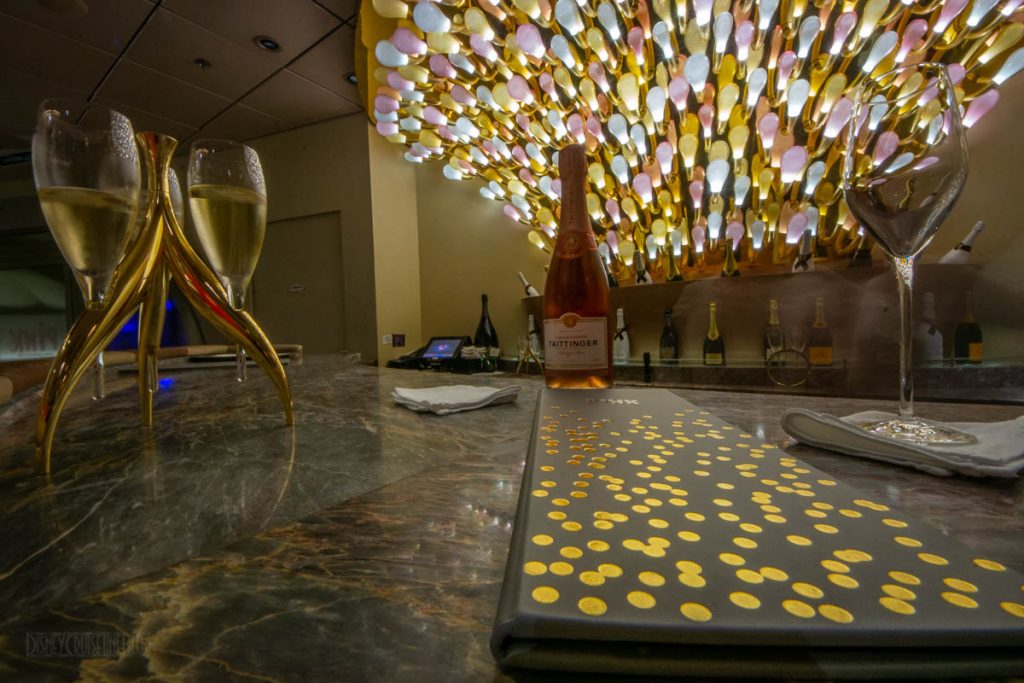 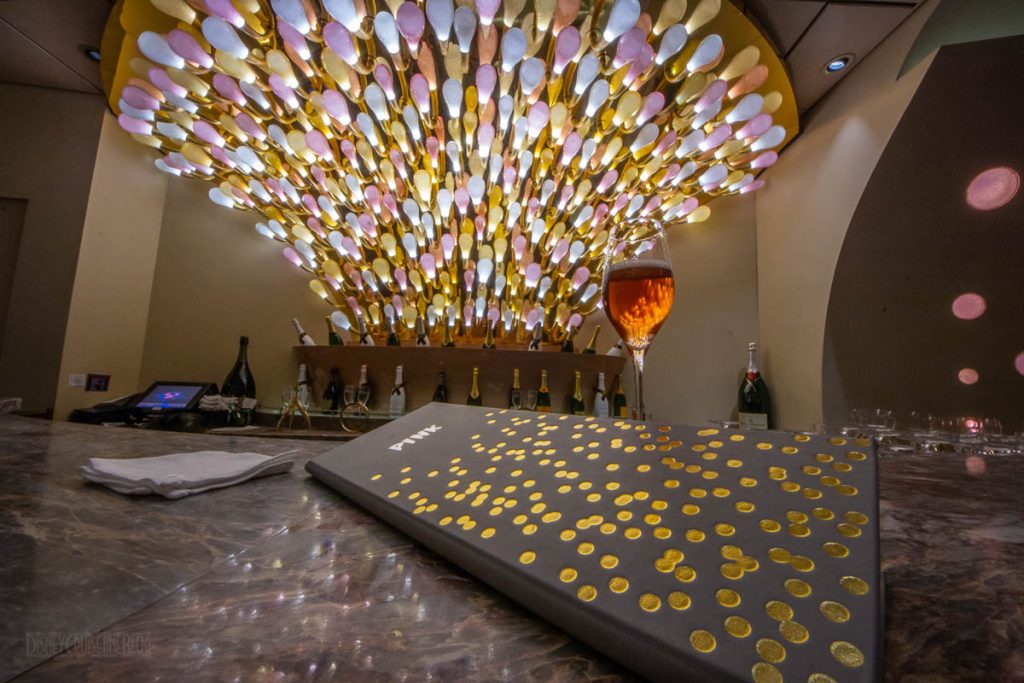 You know what, it turns out my dad sent Isabelle a congratulatory note for scoring a soccer goal before the sailing with some cash to splurge on a sundae. Well, that means one thing when sailing on the Disney Dream. Tonight’s dinner is the Ralph’s Family Challenge from Vanellopee’s Sweet & Treats. Ralph’s sundae is served in a championship trophy with your choice of up to 6 different flavors of gelato and/or ice cream. Oh, you get two scoops of each resulting in 12 scoops plus your choice of toppings and whipped cream and cherries. 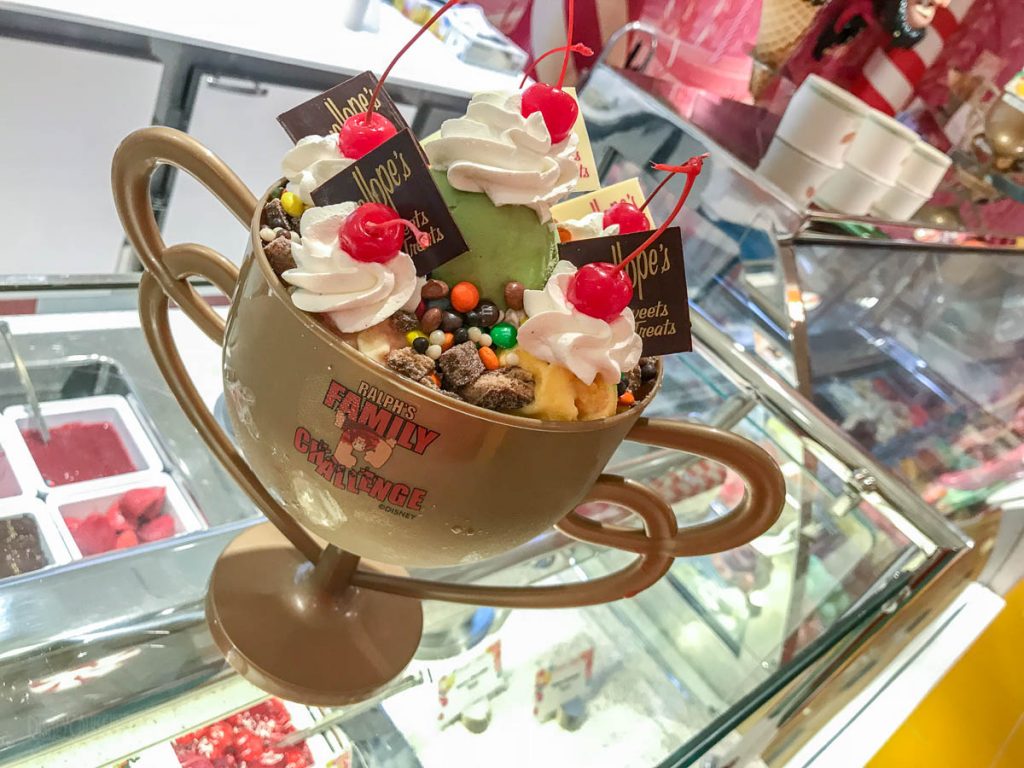 Ralph’s Family Challenge is $14.95, this is NOT a typo. Look at that thing then do the math, for our family that means this indulgence is $5/person. Compare that to what you can get for $5 at say Ample Hills at Walt Disney World. If you have the numbers and do not mind sharing a bowl, go for it. We didn’t even come close to finishing this, but I do feel we got our money’s worth, plus we now have a souvenir to collect dust on a shelf. When you are done, Vanelopee’s will wash your trophy so you can take it home clean. 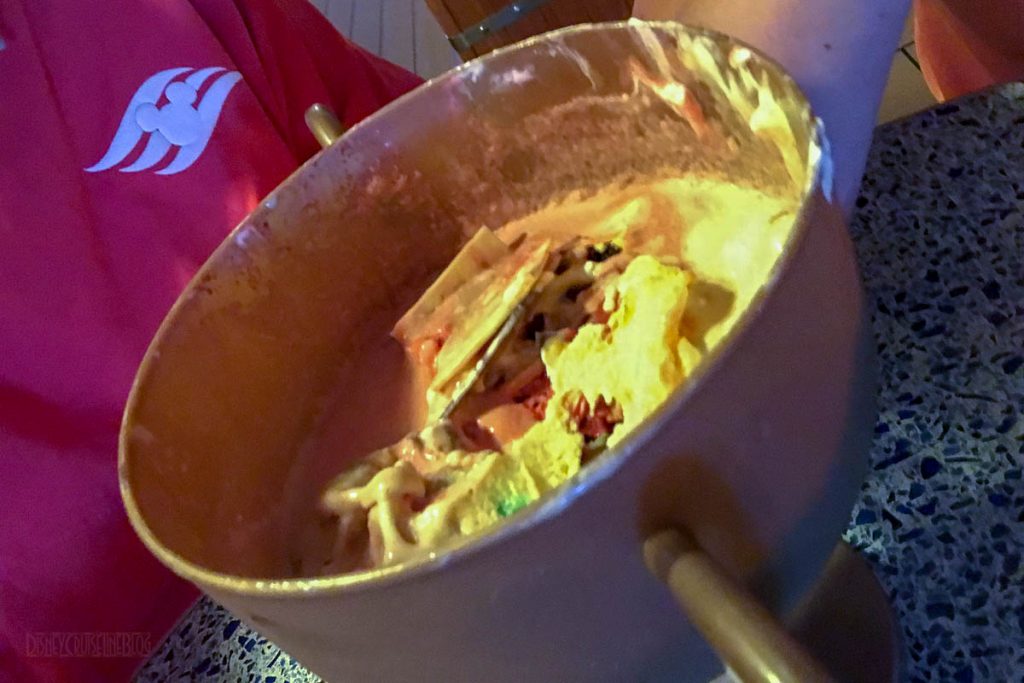 You know what happens when you eat a lot of ice cream? Well, I’m my case I was in an ice cream coma and spent the evening watching college football. 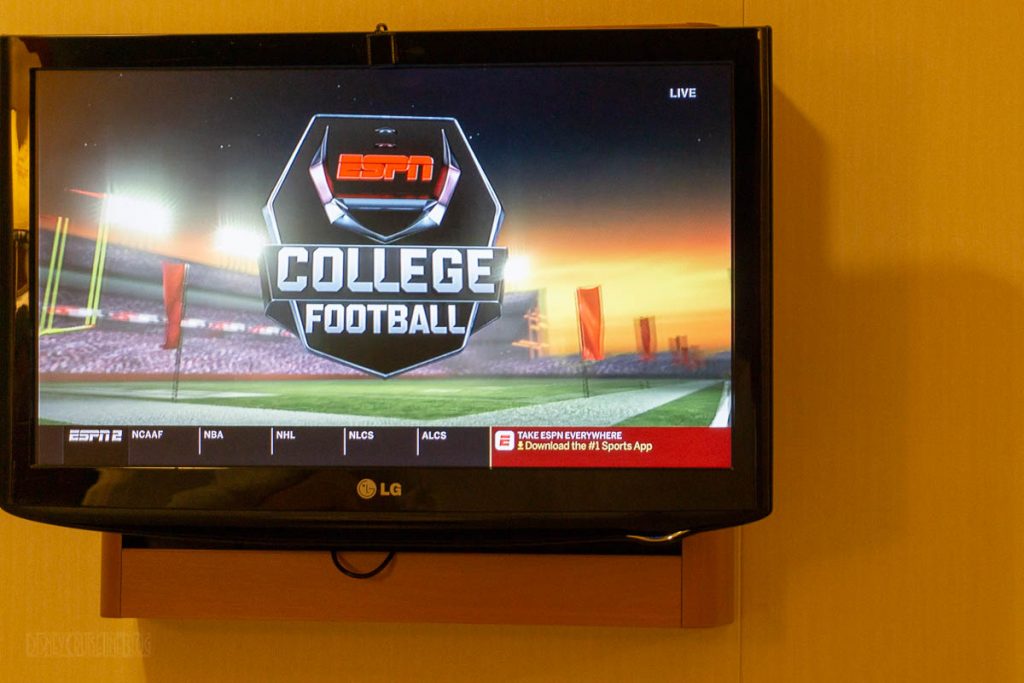 Yes, this is the same photo I used the day before, but this is how we ended the day.