There are two proposals on the table. Disney Cruise Line is proposing a cruise destination and Lighthouse Point Partners wants to preserve the property as a prestige natural and cultural resource for Eleutherans. Prim Minister Minnis will formally announce his decision tomorrow whether Disney Cruise Line’s proposal will move forward or if the Lighthouse Point Partners will be allowed 60-days to present their plan to the residents.

The Lighthouse Point property is currently owned by a partnership between Meritage Hospitality Group and The Related Group who announced plans to develop a Lighthouse Point in early 2008. At the time, the approved development plans called for a luxury resort with a marina and 18-hole golf course. George Baker, a Bahamian businessman and former member of the Bahamian House of Assembly was the owner prior to Meritage Hospitality Group’s acquisition of the property. Baker sold the property for an undisclosed amount. Lighthouse Point was last listed for sale for $20 Million when news first surfaced Disney’s interest in May of this year.

There have been a number of surveys conducted via local Bahamian media outlets as well as one from Public Domain which was reportedly paid for by Disney. The Public Domain survey canvased 994 households across Eleuthera, 38% said they very much in support the development, 28% somewhat in support, and 26% very much do not in support of development by Disney Cruise Line. 9% said they somewhat do not support Disney’s plans. While the Public Domain survey showed overall support for Disney, binary surveys by Tribune 242 showed 80% against and EyeWitness News‘ poll was similar with 79% against. Both major news outlets’ polls were overwhelming against Disney’s development at Lighthouse Point. We could argue the validity of both types of polls all day long. Where respondents led by PR polished questions or were online polls protected from repeated votes or even limited to IP address originating from The Bahamas? I can say, I voted from Florida and saw my vote count.

Many are saying that the turnout of last week’s town meeting turned pep rally in Eleuthera, Bahamas for locals to gather and discuss the future of Lighthouse Point was not a clear representation of the response Disney will receive in Eleuthera if their planned development is approved. Sure, if one were to simply look at a room filled with a raucous crowd – all chanting their praise for Disney – it can be easily mistaken for well-informed, genuine support. However, as the Bahamian people are becoming more aware of the alternate plan being presented by the Lighthouse Point Partners coalition, there is a growing sentiment that Disney will not be welcomed when it’s all said and done.

This absolutely will have a ripple effect that even Disney’s guests won’t be absolved from.

There are known facts that come into play which more and more citizens are becoming aware of: private cruise ports contribute nothing to the Bahamian economy and even less to local communities. The Bahamian people, prior to their last general election in May 2017 agitated for this point to be rectified and surely as the next campaign season heats up, this will be a point of contention for many citizens that all political groups – the current government and aspiring political parties – will be minded of.

Unlike most of the stories they’ve brought to us over the years, Disney may not end up being the protagonist in this story.

What Disney is guilty of is using heavy-handed tactics to create a narrative that it can spread solely to the enrichment of the “Magic Kingdom”. It’s use of a local marketing research firm has led to the questioning of the integrity of said company. Additionally, the news outlet that heavily published the poll also experienced some backlash, as its general manager doubles as one of the principals of the research firm. Through a survey riddled with a series of leading questions – which have since been debunked as an obviously Disney-funded attempt to make the appearance of support that doesn’t exist as widespread as they would like everyone to believe – Disney may have failed at performing this magic trick.

Three polls conducted by the largest media outlets in The Bahamas – including the one mentioned earlier – all indicate overwhelming disapproval for the development.

While Disney promotes itself as the least environmentally hazardous cruise company, many citizen’s fear of the threat of destruction to such a sacred place is not quashed by public relations machinery. It certainly doesn’t subside when it becomes obvious that Disney is paying the local Member of Parliament’s wife to promote their plan and giving out shirts to supporters to wear at pep rallies.

In fact, this kind of desperation is cause for great concern. Many more Bahamian people are becoming irate at what they feel is the exploitation of Eleutherans by Disney. The promise of jobs, while not being as forthright on the possibilities of what has the potential to be lost could not make Disney a more disingenuous actor.

The local coalition of NGO’s which is promoting a model for sustainable development is steadily becoming the preferred option for not just Eleutherans, but Bahamians at large, who want to own their economy. Scores of Bahamian people who have had the opportunity to review the plan via the Lighthouse Point Partner’s website are seemingly quite intrigued by this alternative.

The promise of more jobs, eco-tourism opportunities, preserving the environment and ownership opportunities for Bahamians have all been quite appealing to citizens that want to move away from the country’s traditional tourism model.

All that being said, it would seem as though Disney’s desperation to take on this venture is clouding its judgment. While it may be a juggernaut of a brand, the potential fallout as a result of protests from various groups that will most likely intensify if this project is approved should seriously be considered.

The question now is whether Lighthouse Point will mean that much to Disney?

The War for Lighthouse Point and the Soul of the Country

The following proposal from Lighthouse Point Partners was shared with us as a pdf. 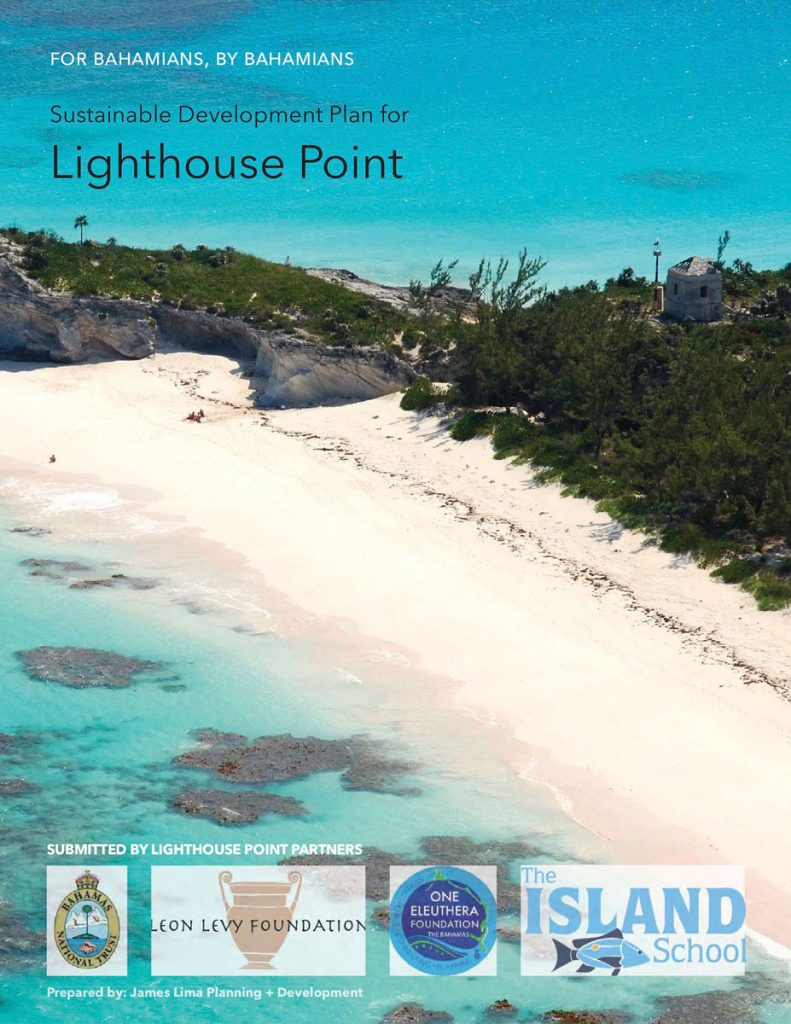 Disney’s proposal has been floating around for some time, but now we are privy to the slideshow (pdf) presented in The Bahamas by Disney Cruise Line.

During the presentation, Disney revealed some guest details while promoting the brand. Disney Cruise Line guests have a median household income of $136,000 and pay 65% premium pricing with Disney. Additionally, 80% of parties sail with children under 18. Each year, Disney Cruise Line contributes $40 million in direct benefits to The Bahamas. There are 150 Bahamian employees and Disney has donated nearly $3 million towards conservation projects in The Bahamas along with the millions invested already at Castaway Cay.

Disney has been using a previously approved development plan, the luxury development mentioned earlier, to bolster its case. The previous development was far from low-density. It makes Disney’s proposal look undeveloped altogether. The earlier proposal was over a decade ago when times and opinions on the environment were much different.

Disney’s low-density development calls for only developing 20% of the property for beach chairs, umbrellas, and small support structures. 170-acres would be given to The Bahamas for conservation and the entire property would be available to the Bahamians every day. The 100+ acres of salt ponds would remain untouched. Disney would build an education-based eco-center and contribute to the conservation efforts in Eleuthera. Disney would also utilize solar power for its needs at Lighthouse Point which they are looking to install solar at Castaway Cay to provide about 70% of the power needed for operations.

The biggest topic when it comes to Disney developing Lighthouse Point into a cruise destination is dredging. Plans call for an open-trestle pier that would have a much smaller footprint and impact on natural ocean currents than a traditional pier design. As it stands, Disney estimates this would require little, if any, dredging to accommodate its cruise ships.

Disney expects the project to generate 120-150 permanent jobs ranging from horticulture, transportation, secret, maintenance, custody, food and beverage, recreation and more. Wages would be the same as they are over at Castaway Cay where wages are 50% higher than the Bahamian minimum wage. These jobs would provide full-time work, overtime, and opportunities for advancement. Development of Lighthouse Point would create another 100+ jobs.

Disney plans to maintain and restore the significant cultural sites and integrate the Bahamian voices and artist expression into the design of the property.

The following, an hour-long special from EyeWitness News features interviews with residents in favor of Disney’s development and provides a look at the breathtaking beautiful property of Lighthouse Point.

This special was very pro-Disney, but I took away one thing. The people of Eleuthera represented in the special want the opportunities and jobs that Disney is promising that they will bring to Eleuthera.

The Walt Disney Company has the resources to set the new standard in cruise destination development and do things right for the people and the environment. Disney Cruise Line has a huge target on their back, they cannot put themselves in a position where they could tarnish the name of The Walt Disney Company by destroying the environment. As a result, if the Bahamian government grants them approval to develop Lighthouse Point, Disney will be under the spotlight to ensure they follow through on their promises to protect and sustain the natural beauty of Lighthouse Point while creating a sustainable economic opportunity for the people of South Eleuthera.

Regardless of which proposal is selected, only time will tell if either side will live up to the promises made.