The Fury Catamarans Sail, Snorkel & Beach Party is a Disney Cruise Line Port Adventure offered in Cozumel, Mexico. This particular excursion has been offered for years and we decided to check it out during our Marvel Day at Sea cruise in March. DCL promotes the excursion as a 3-in-1 adventure offering guests the opportunity to snorkel, play at an aqua park, and soak up the sun during a stop at Fury’s private beach all while sailing aboard a 65-foot catamaran.

The excursion begins as all Disney Port Adventures do, with a designated meeting spot onboard the cruise ship. 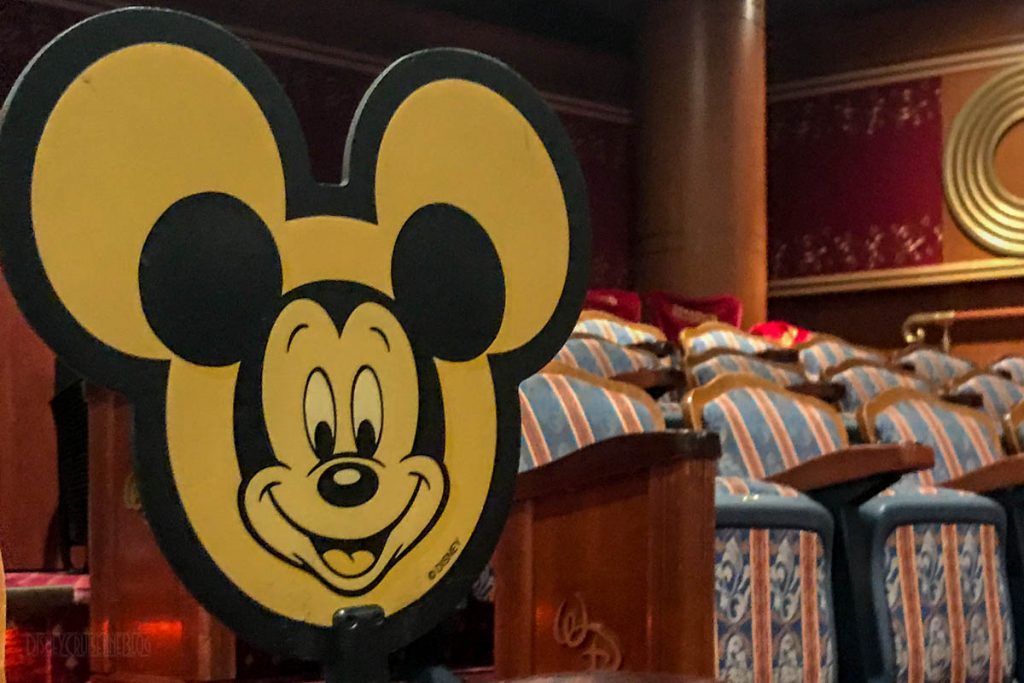 Once everyone was checked it, we disembarked as a group. Our meeting point was just a short walk along the pier. 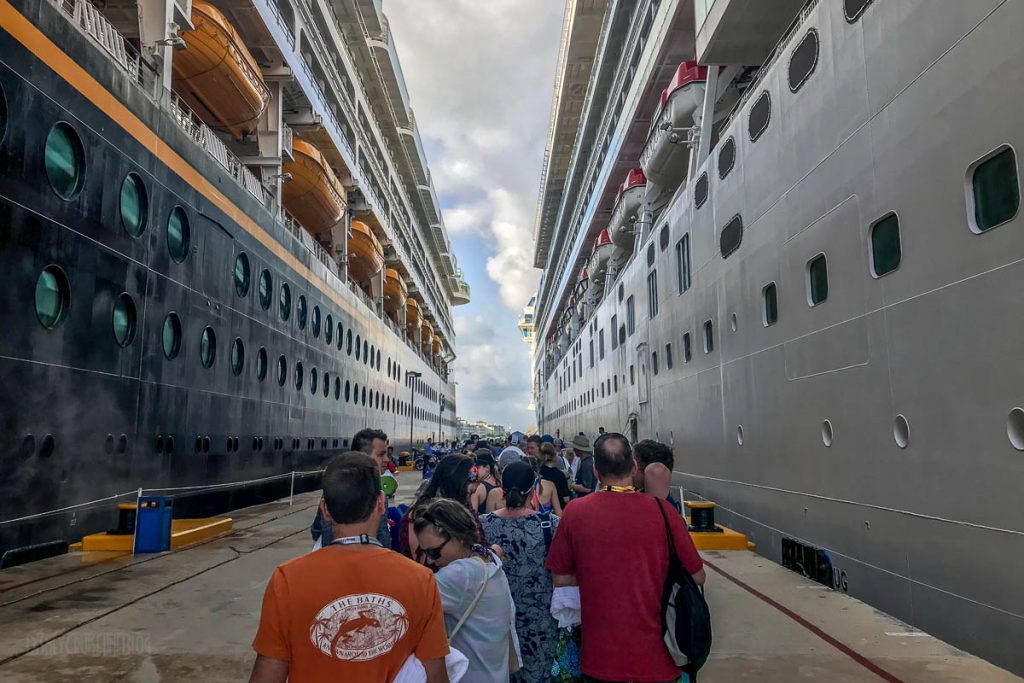 Just short of the pier’s security gate, one of Fury’s 65-foot catamarans was awaiting our arrival. Although we did not leave the pier, we were screened by local authorities with K9s before boarding the catamaran. I really appreciate when tours such as these pick guests up at the dock versus first transporting you via van or bus to another dock eliminated extra travel time. Additionally, you do not need to run through the gauntlet of vendors in the Punta Lagosta Mall. 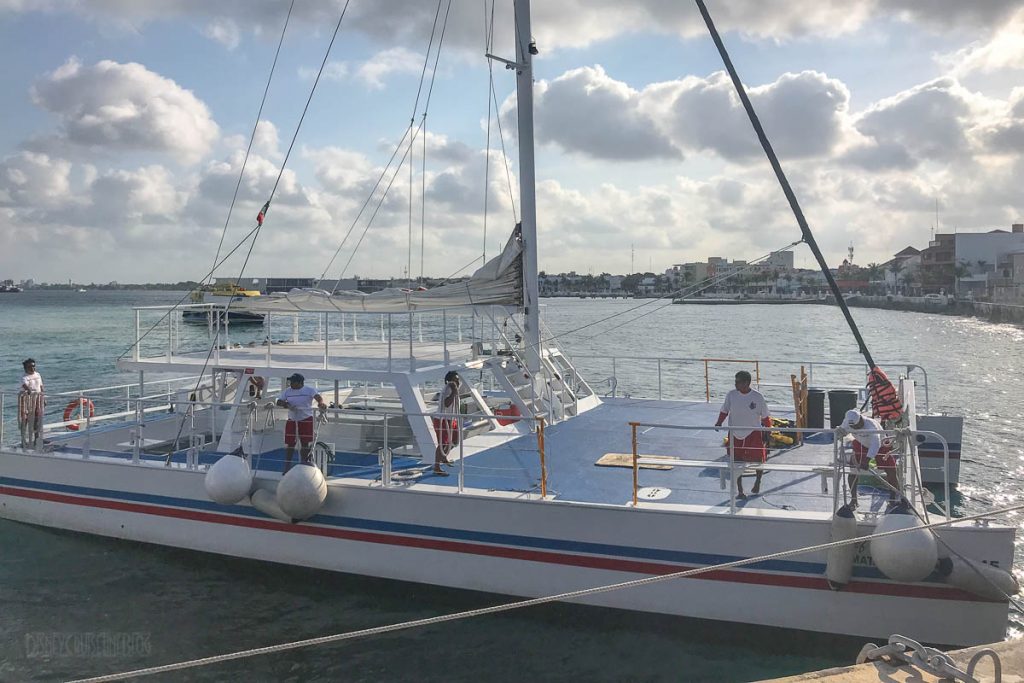 Fury had a photographer on the catamaran taking group photos upon arrival, more on this later. I will answer the most important question, the Fury catamaran does have restrooms. You can choose to sit on the upper decks or in the shaded lounge area with bench seating near the bar. 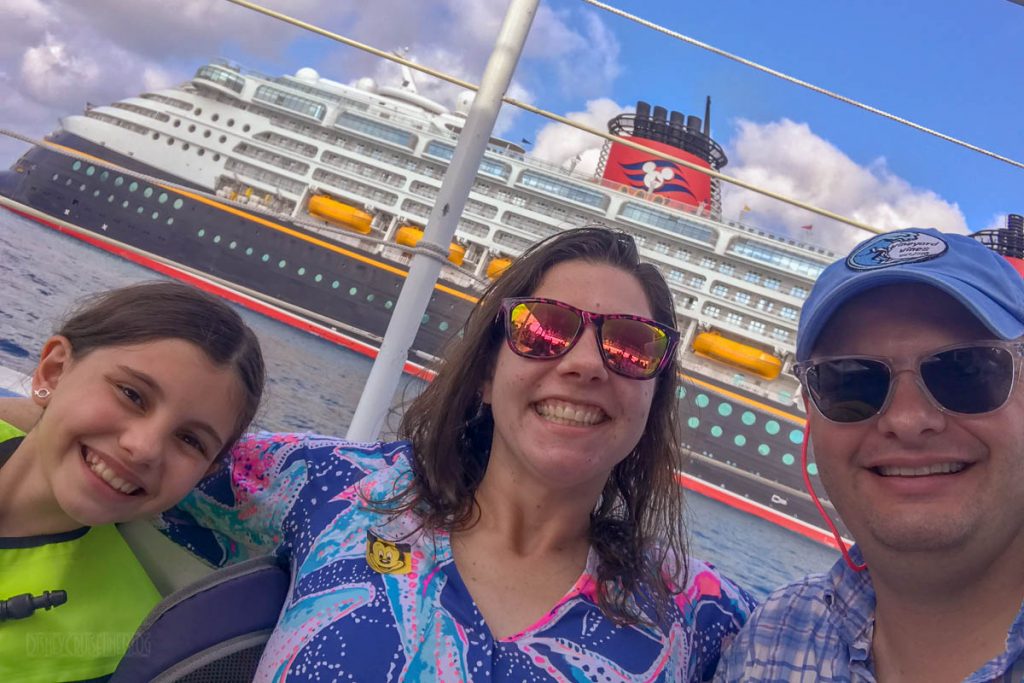 Once everyone was onboard, we were given the safety talk and we were on our way. We sailed about 20-minutes southwest along the coast just past the Cozumel Cruise Terminal / Puerto Maya to a snorkeling site. The crew gave everyone the choice to jump in the water or use a staircase that is lowered into the water.

Snorkels, masks, fins and the required snorkel vest are provided on this excursion, but you are welcome to use your own equipment. If you have your own snorkeling vest, it is a good idea to write your name on it before to avoid any confusion at the end when turning in gear. Unlike, masks, fins, and snorkels, the vests all tend to look similar to the standard issue florescent yellow. I only mention this because Isabelle has a youth snorkeling vest and we’ve had issues in the past with crews thinking we were trying to keep it – now I see there is a larger selection of vest colors available.

We were asked to stay together in a group and to follow the in-water guide snorkeling with the current. The catamaran occasionally adjusted its position to allow for any guests to board whenever they desired.

At first, I was worried the water would be a too cold for my liking in mid-March, but it wasn’t all that bad. We were given 40-minutes of snorkeling time based on when the first snorkeler hit the water. 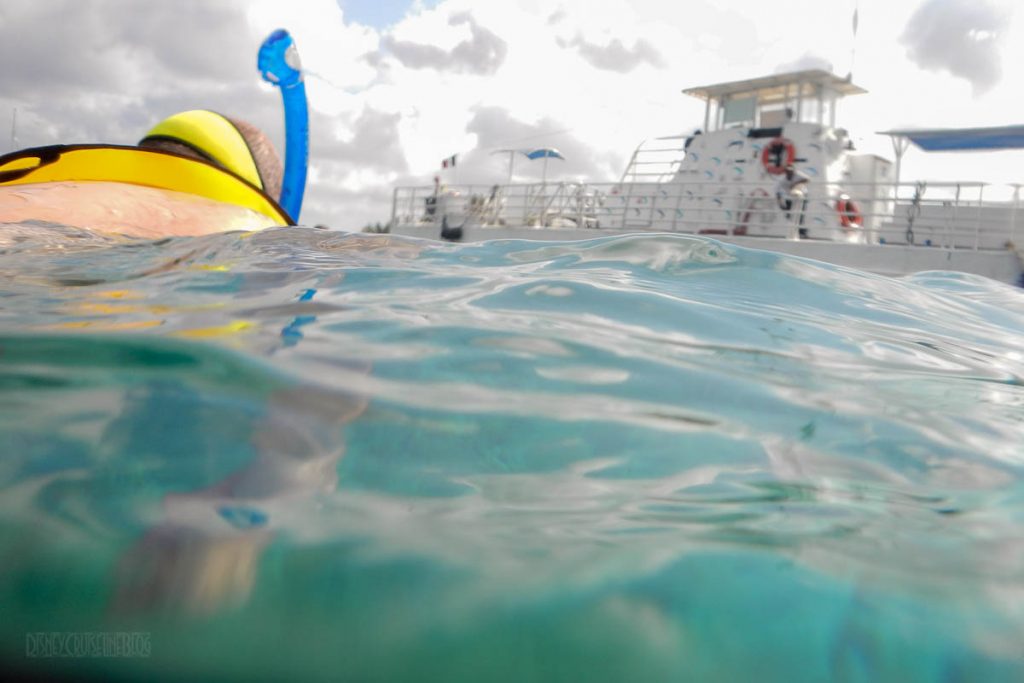 By my clock, we were called back after 30 minutes which given the forgettable snorkeling area was more than enough time to see a few fish.

If you are a seasoned snorkeler looking for some great sights, skip this. It is not that exciting in terms of reef snorkeling. There were some coral formations, but nothing worth writing home about.

Once everyone was back on the catamaran, we headed to Fury’s private beach which was roughly 20-minutes further southwest from the snorkeling spot. 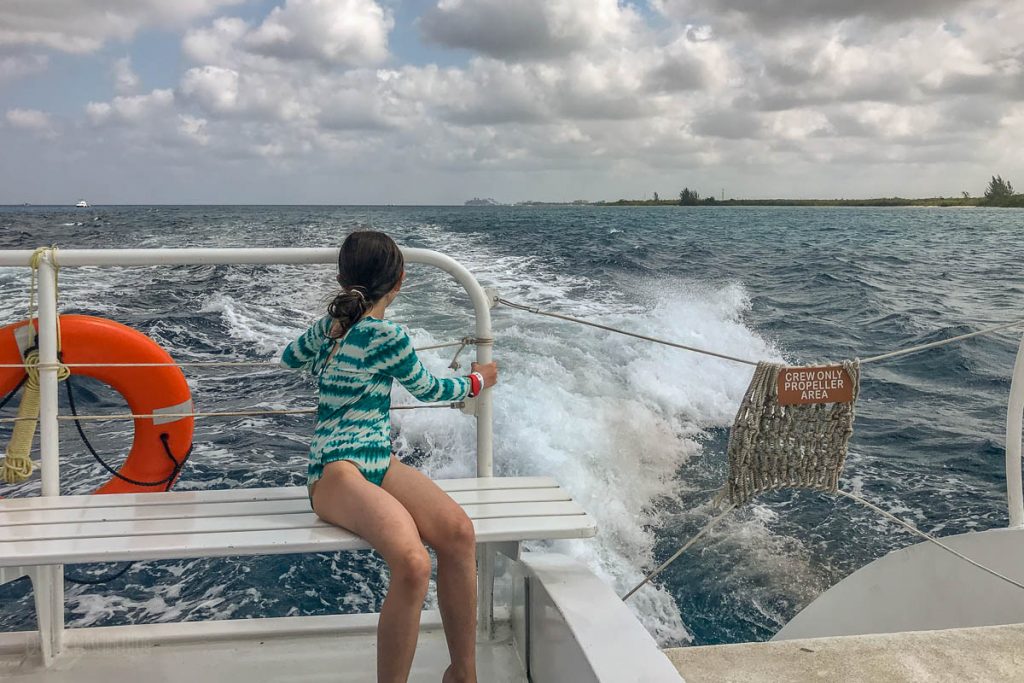 During our time back onboard sailing to the beach, we were offered complimentary margaritas, beer, soda, and water. 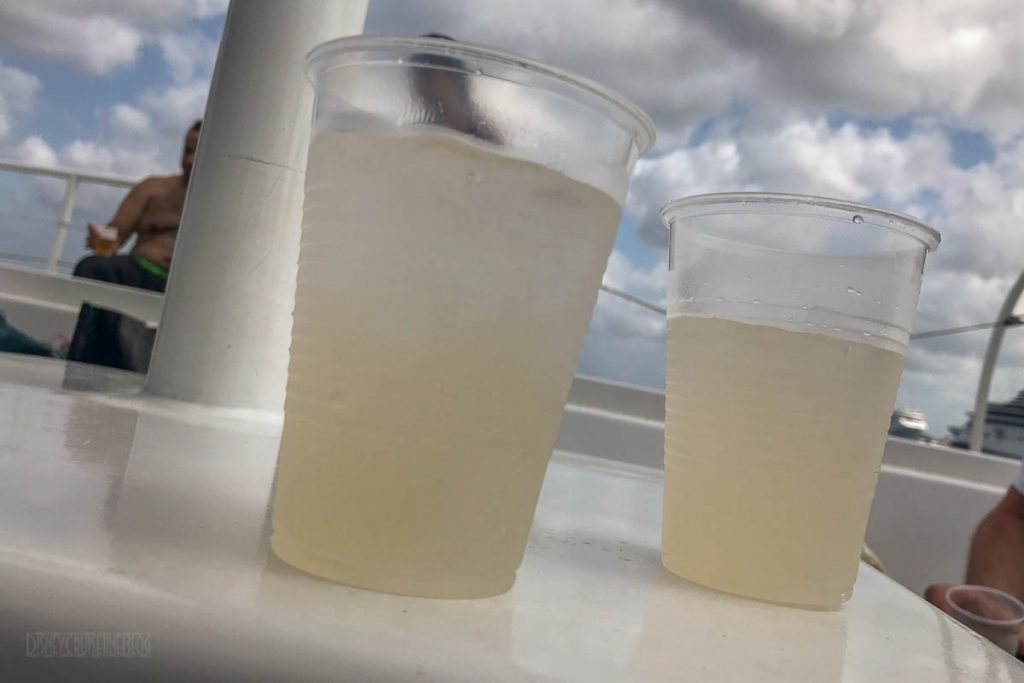 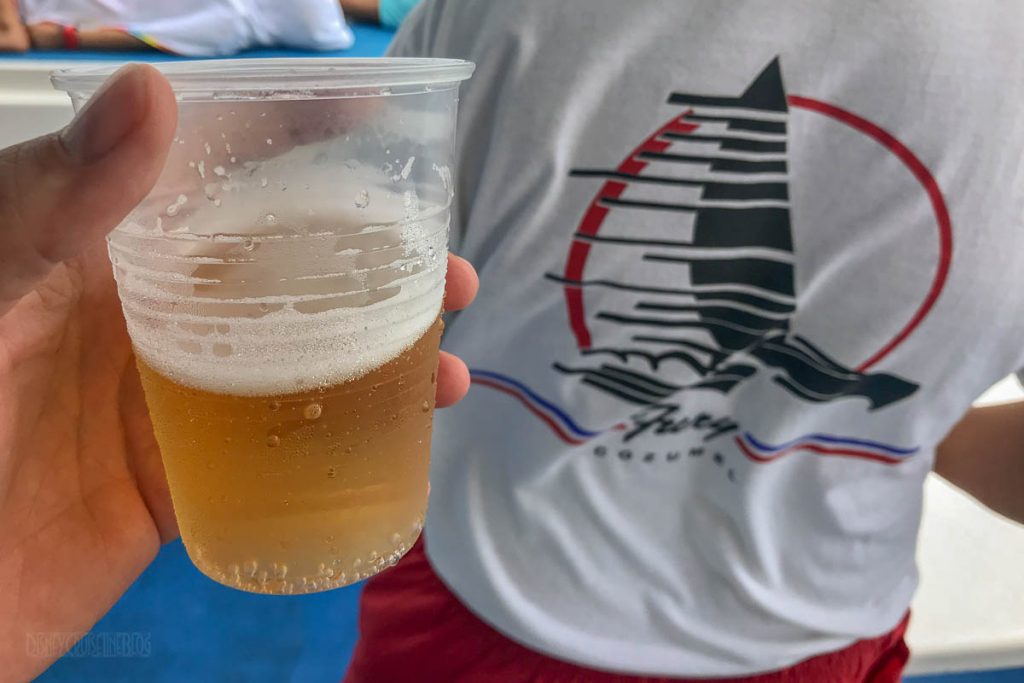 As you arrive at Fury’s private beach, you can see the Aqua Park. The inflatables include slides, trampolines, and an obstacle course. This portion of the excursion is 90-minutes. 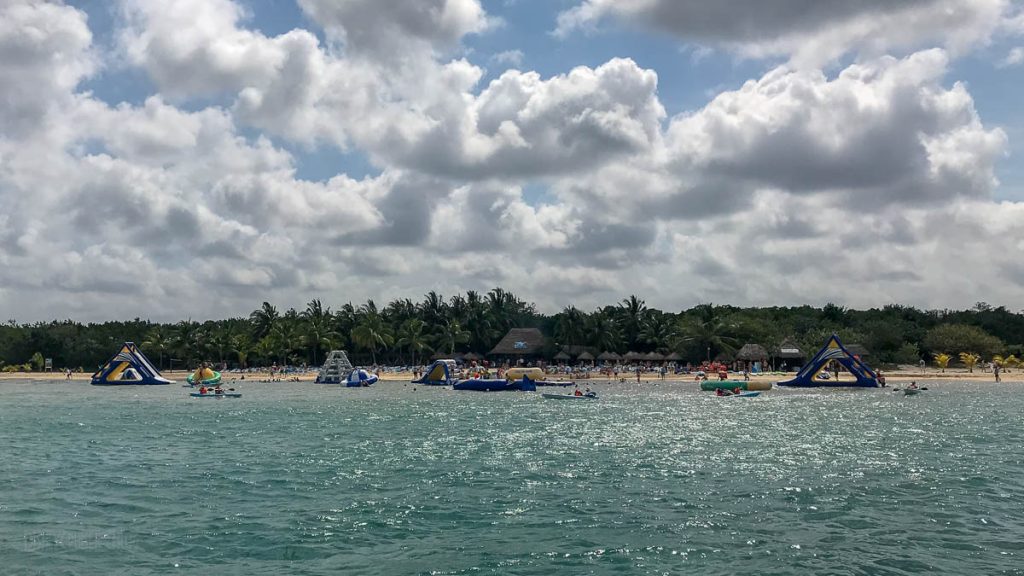 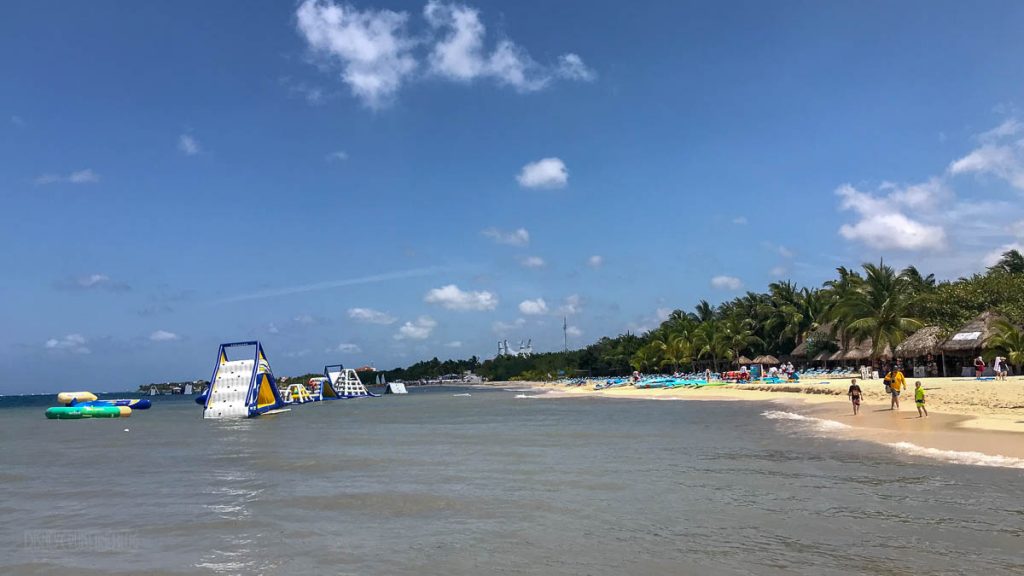 I’m going to get right to the point, the Aqua Park was a blast. However, I would like to point out, the water is deep and you should be on guard at all times. Emily took a good kick to the back on the obstacle course from a kid. Additionally, paranoia set in when I saw Isabelle attempting to climb up on one of the floats that were wobbling in the surf nearly coming down on top of her as it rocked back and forth. These floats are heavy and not something you’d want hitting you on the head. I’m not normally a worry wort, but this had me on edge. I am in no way being negative, I’m just being an overprotective dad. Like I said, it was a blast and I’d love to return or visit a similar aqua park in the future.

One thing the Aqua Park does is wear you out. It takes a lot of effort and coordination to stand up on the rafts. Thankfully, after snorkeling and playing in the water, the private beach awaits.

There is a beach shop and a few vendors, but this is a private beach so they are not going to hassle you. The bathrooms, floating sun mats, hammocks, volleyball, kayaks, stand up paddle boards, beach chairs are included in the excursion price. No need to pay extra for those loungers like on some beach excursions. Seriously, the beach exclusive to Fury’s guests and mostly all-inclusive. It is about as close to a Castaway Cay experience as you could get in Cozumel.

Fury continues to offer free margaritas, beer, soda, and water on the beach and food is available to purchase. A hot dog lunch was $8 and a hamburger with sides was $10. We opted to skip the American fare in hopes of getting some tacos near the port.

Around 12:30, we returned the catamaran to head back to the Punta Lagosta Pier. It is important to remember the number on the catamaran as there are multiple catamarans on the beach and they are all identical. I am almost certain, Emily and Isabelle were going to let me get on the wrong catamaran. 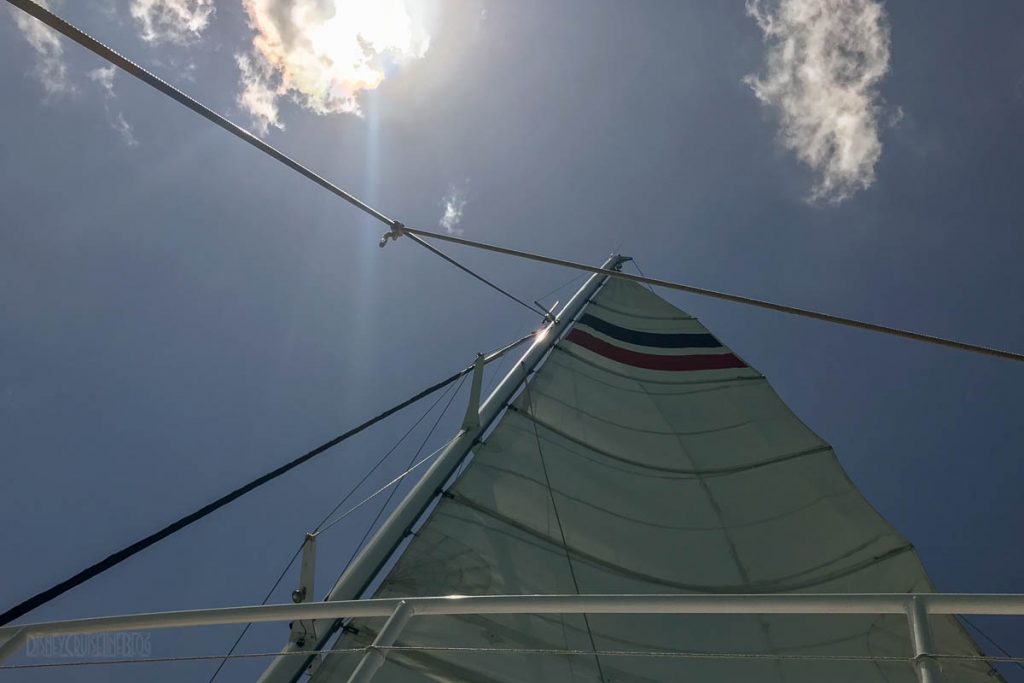 On the way back we were presented with the photos taken during embarkation for a nominal fee; it was $12. 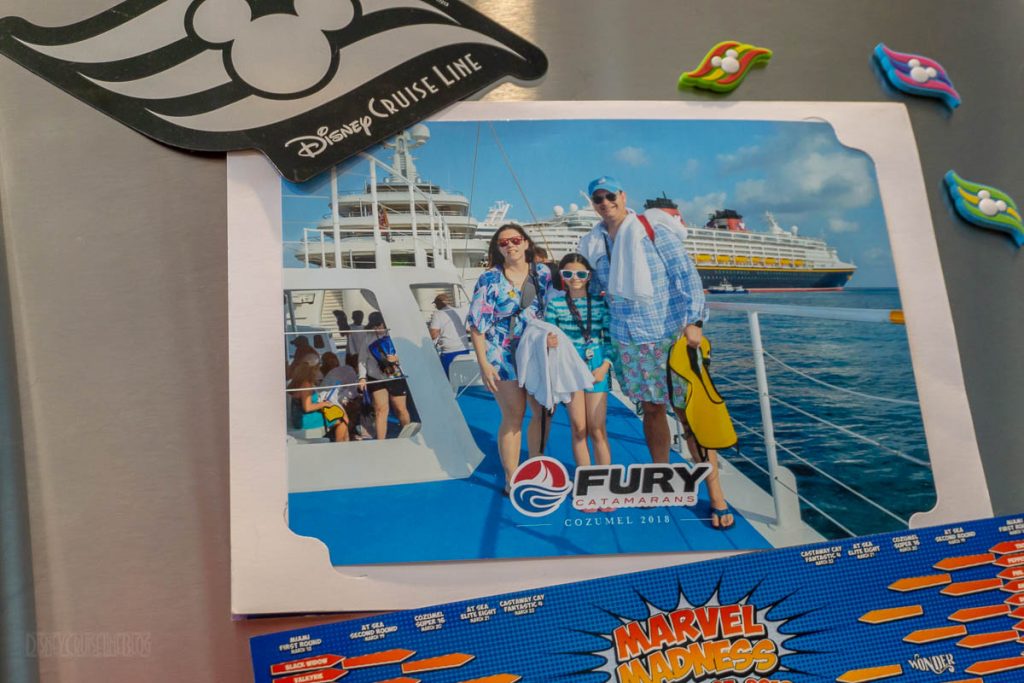 By the time we returned to the Punta Lagosta Pier, it was closing in on 1:30 PM, and we were starving. As much as we wanted to head back out for lunch, we decided to get lunch on the pool deck and spend the afternoon poolside.

All in all, the Fury Catamaran Sail Snorkel and Beach Party (CZ12) was an enjoyable experience, but due to the lackluster snorkeling site, I doubt I’d book this again. Snorkeling over a sandy bottom with a few coral formations sprinkled around is not what I’d consider the site full of “vast coral formations” or an “incredible reef to enjoy amazing marine life and coral formations”. Who knows, we were not taken to the same spot as the people writing Disney’s port adventure description or the blurb on Fury’s website. Still, overall, this was a fun port adventure once I take out my snobbish attitude about snorkeling. At the time of our tour, DCL charged $68.00 (ages 10 and up) and $40.00 (ages 5 to 9) which is only $3 and $5.50 more per age group than if you were staying in Cozumel and booking directly. Fury does not allow cruise guests to book directly and even if you did book directly, you’d never be back by the all aboard time. Needless to say, this DCL port adventure is fairly priced.