Recently, Disney Cruise Line started to send out emails to guests booked aboard the Disney Magic’s upcoming 7- and 8-night Bahamian cruises from New York with a port day at Port Canaveral. This email contains similar information to the email that was originally sent to guests back in June of this year with details on the included 1-day Walt Disney World Resort ticket with Park Hopper which includes three FastPass+ selections.

The email is being sent to inform guests that they will use their shipboard Key to the World Card as your ticket into the Theme Parks for the day. Three FastPass+ selections will automatically be included as part of your admission that can be used at any attraction including Avatar Flight of Passage and Na’vi River Journey in Pandora – The World of Avatar at Disney’s Animal Kingdom. You will not need to make FastPass+ selections in advance.

That last part about Flight of Passage is the really important news as both of the Pandora attractions were specifically excluded in the June email. It would appear, based on guest feedback DCL decided to make the change!

DCL is also taking this opportunity to inform guest that their DCL Key to the World Card cannot be used for charging privileges at the Walt Disney World Resort. You will need to bring a credit-card or cash for all in-park purchases.

Additionally, Disney Cruise Line is asking guests to visit DisneyCruise.com to sign up for a complimentary transportation ticket from the cruise terminal at Port Canaveral to the Walt Disney World Resort or book one of the Port Canaveral Port Adventures. Complimentary motorcoach transportation will be provided from Port Canaveral at select times beginning as early as 7:30 a.m. Return transportation will be available throughout the afternoon and up until just before regular park closing time. Travel to Walt Disney World will take approximately 90 minutes so be sure to plan your first activity no earlier than two hours from your bus departure time.

Also, please keep in mind that many Disney table-service restaurants are quite popular and can book very quickly. Dining reservations can be made up to 180 days in advance online at http://disneyworld.disney.go.com/reservations/dining/ or by calling (407) WDW-DINE.

Below is a copy of the full email DCL is sending to guests. 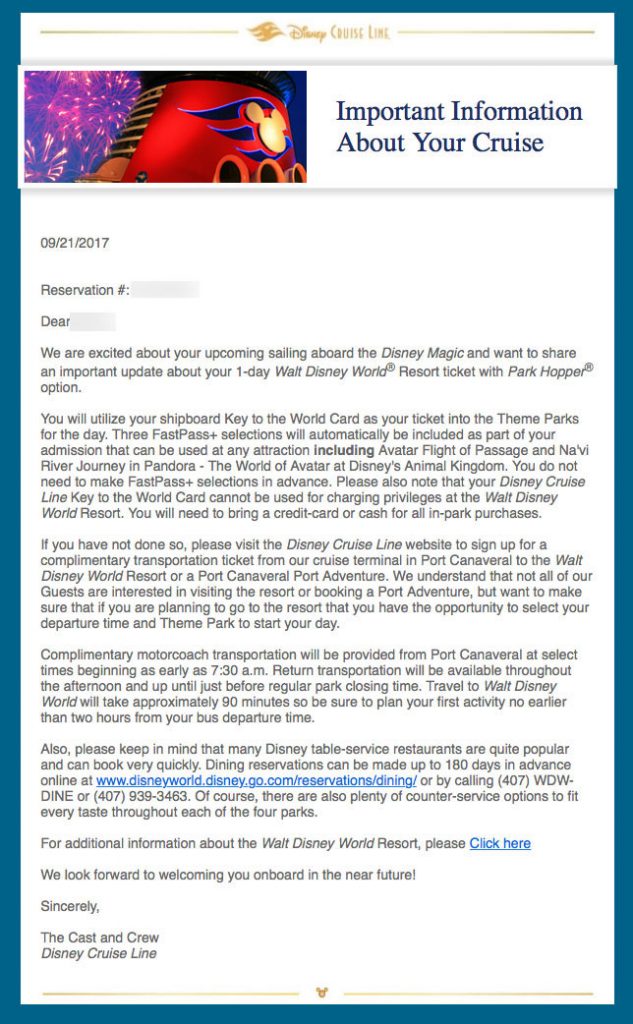