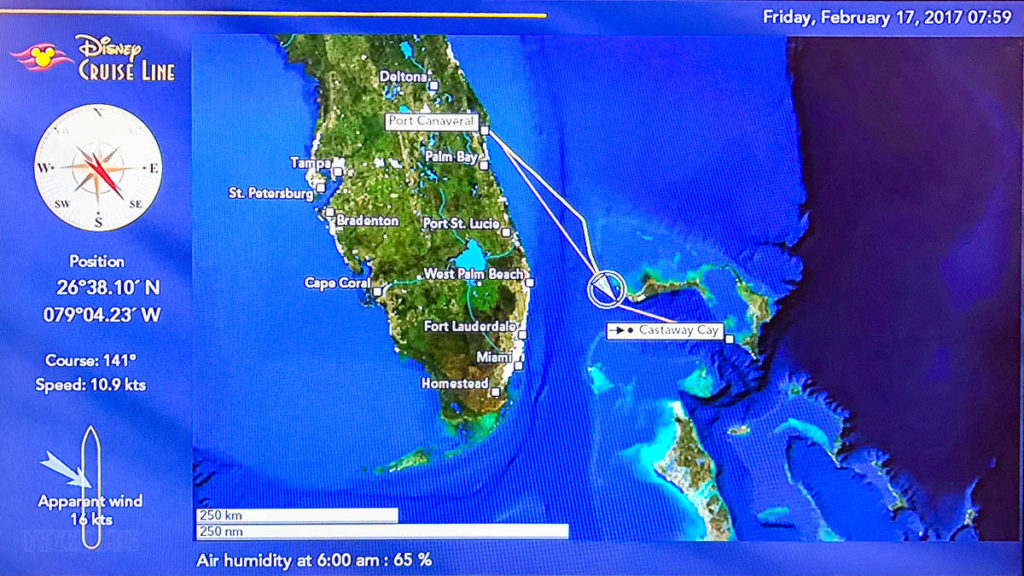 Dawn comes early on a boat, every morning just about sun up. Our internal clocks are not taking a vacation so we took advantage of the early hours. Emily hit up the ghost town that was the gym at about 6:15am. Isabelle joined me we took photos around the ship starting with Atrium before moving around to After Hours. 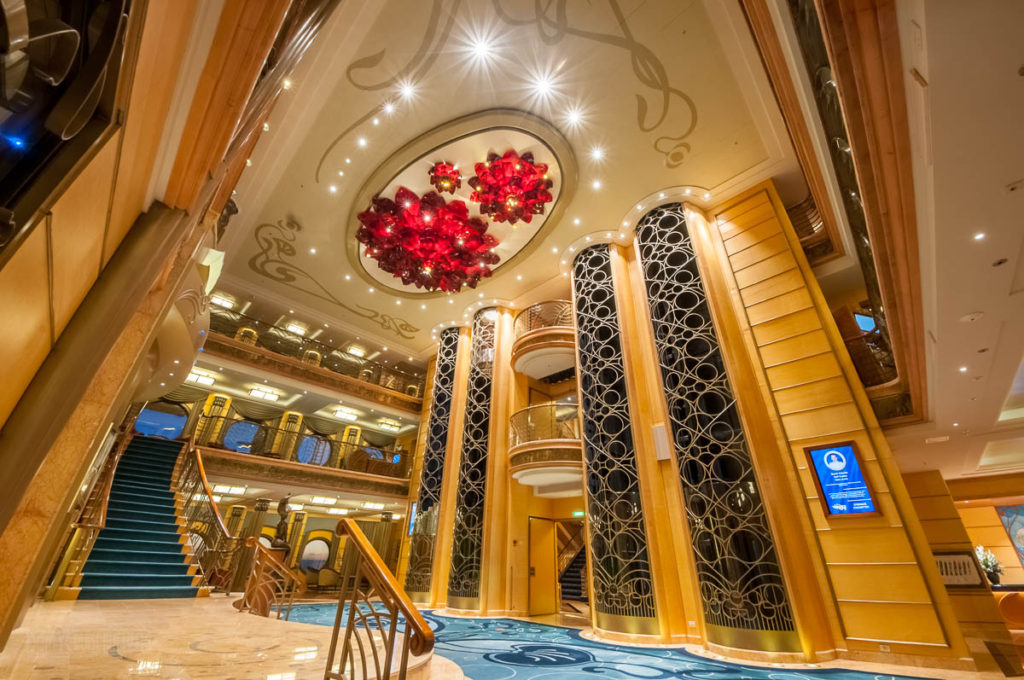 Em had tea and fruit after her workout and headed back to take a shower, and I joined Isabelle in Cabanas for breakfast, which opened at 7:30am. 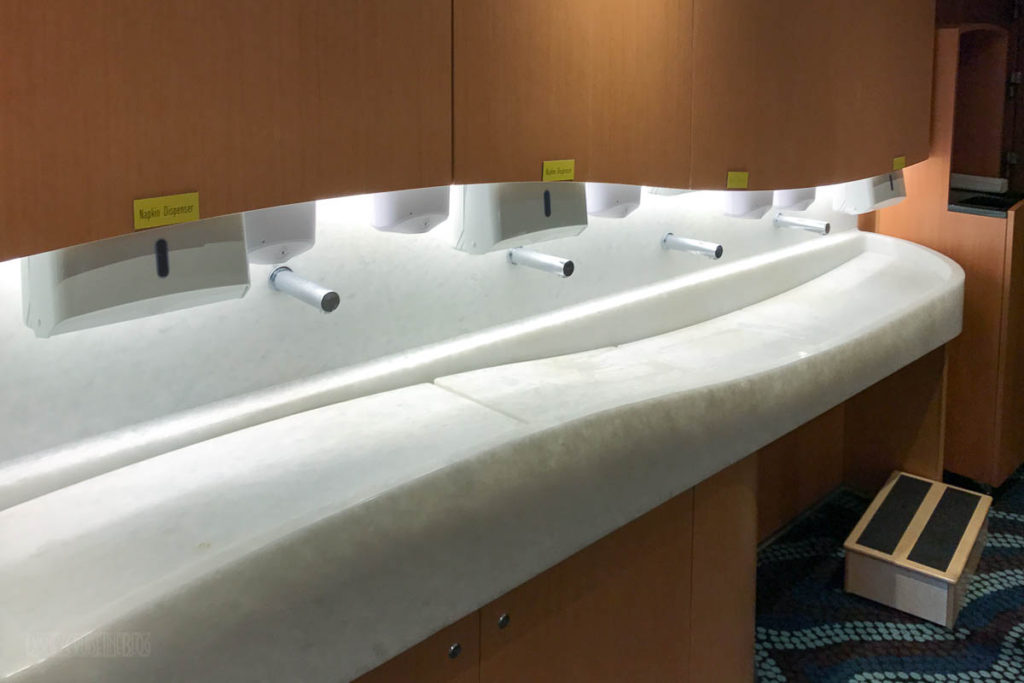 I’m beginning to think they should have installed a bank of the hand washing machines from the kids clubs — it wouldn’t look a fancy, but would help insure everyone really washes their hands before heading into Cabanas.

I made a trip down to guest services to inquire about our Palo reservation that I mentioned in yesterday’s trip log.

After finishing the last half hour of Iron Man 3, we parted ways. Isabelle couldn’t wait to get into the kid’s clubs, so she checker herself into the Oceaneer Lab while Em & I enjoyed watching the waves go by on deck 4 waiting for the shops to open at 9:30. 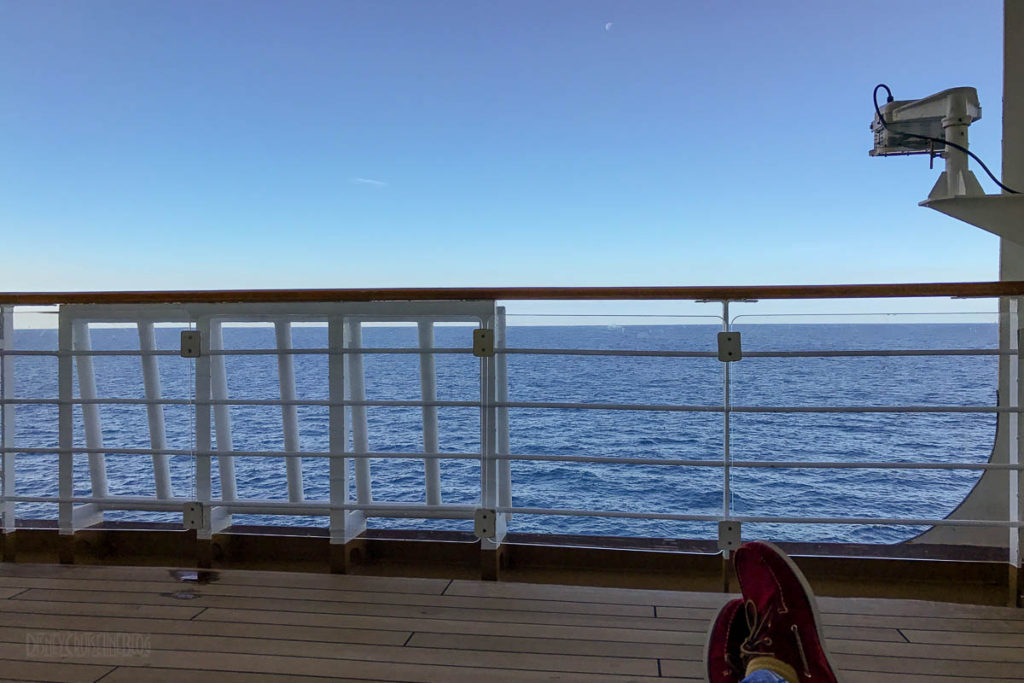 Just after the shops opened, I walked around to see what there was to buy and for the first time in a while, I felt the need to buy things on the ship I do not need. We shall see what happens, there is one item I’ve looked at for years and may just get this time. Em inquired about the Tsum Tsum collection only to learn they were only made in a limited number and have sold out quickly both times they have stock, including people that buy 10+ of each at a time. Remind me to check eBay when I get home… ugh.  Hopefully, these exclusive Tsum Tsums will get a bigger release soon. 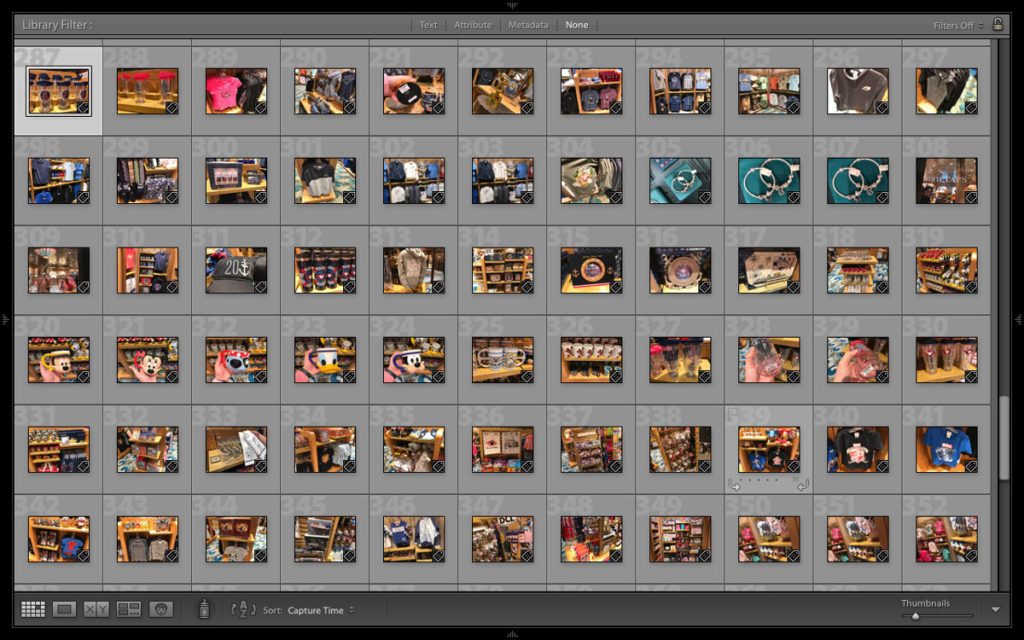 I normally do not provide full photo coverage of the merch, but at the request of Mr. Burgan, I will post all the merchandise in the coming days. For now, it is time to move on and talk about brunch. 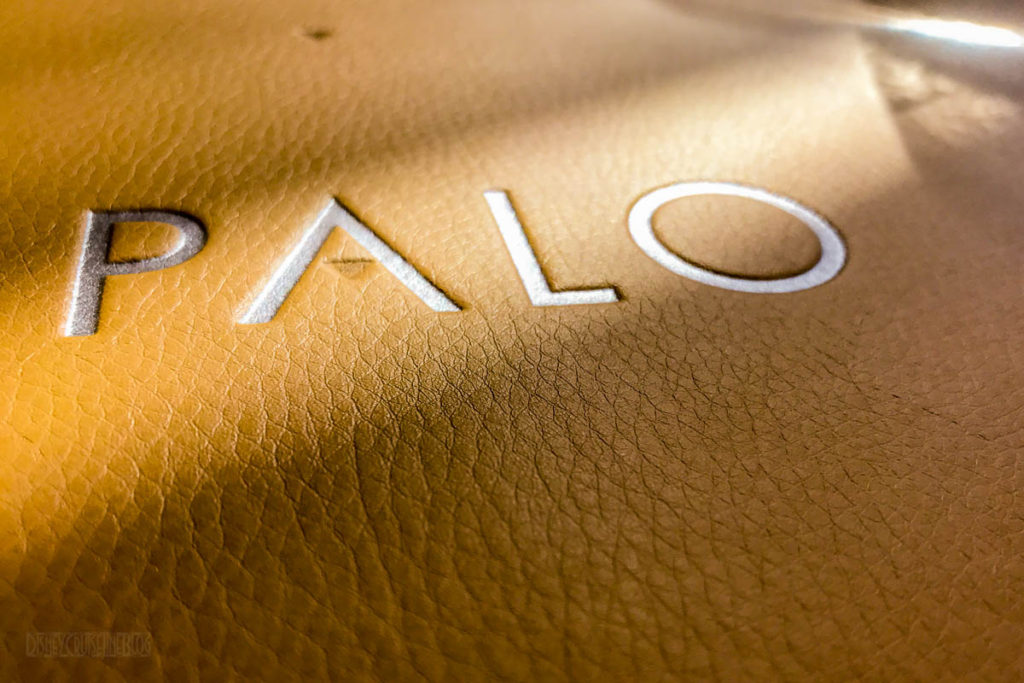 We met our friends, Heather & Tony, outside Palo for our 10 AM brunch seating. We were seated and offered a complimentary glass of mimosa or ‘champagne’ — instinct took over and we opted to go with the ‘champagne’ and immediately realized we had been had when they filled our glass with the same Santa Elvira Prosecco they offer as a Platinum Castaway Club gift. 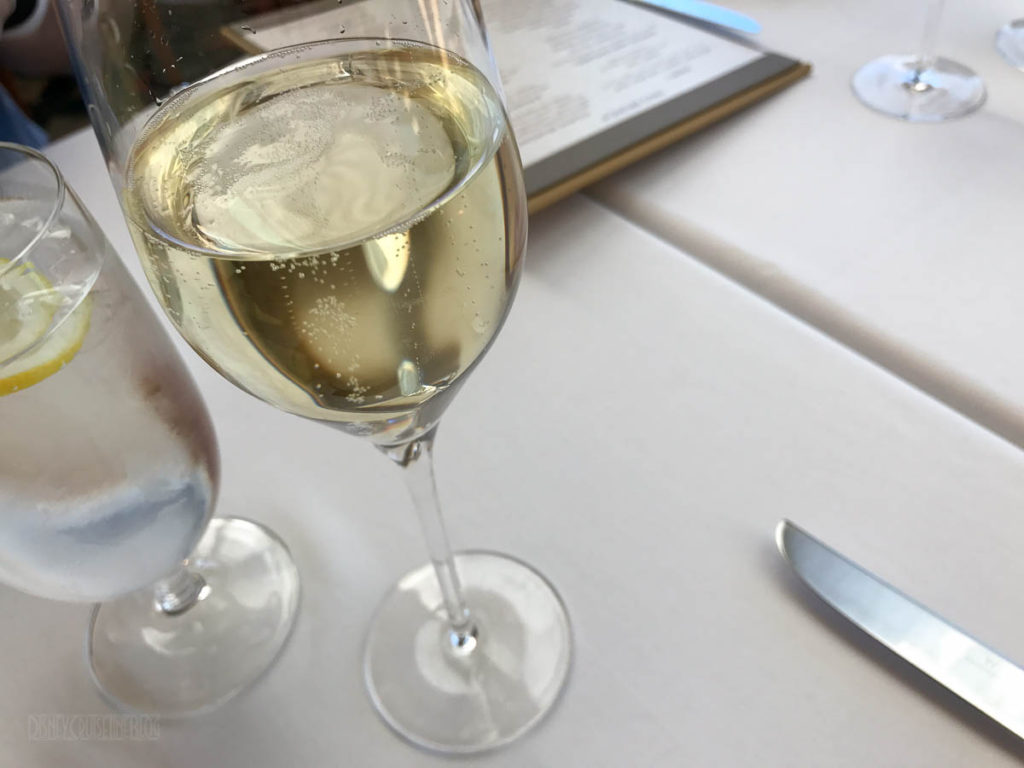 BEGIN RANT: Feel free to call me a snob and tell me to get over it, but this is from Italy NOT from the Champagne region of France ergo it SHOULD NOT BE MISREPRESENTED AS CHAMPAGNE even if it was made in the champagne method in which this particular Prosecco is not even that, Santa Elvira is produced using that tank method (charmat method). 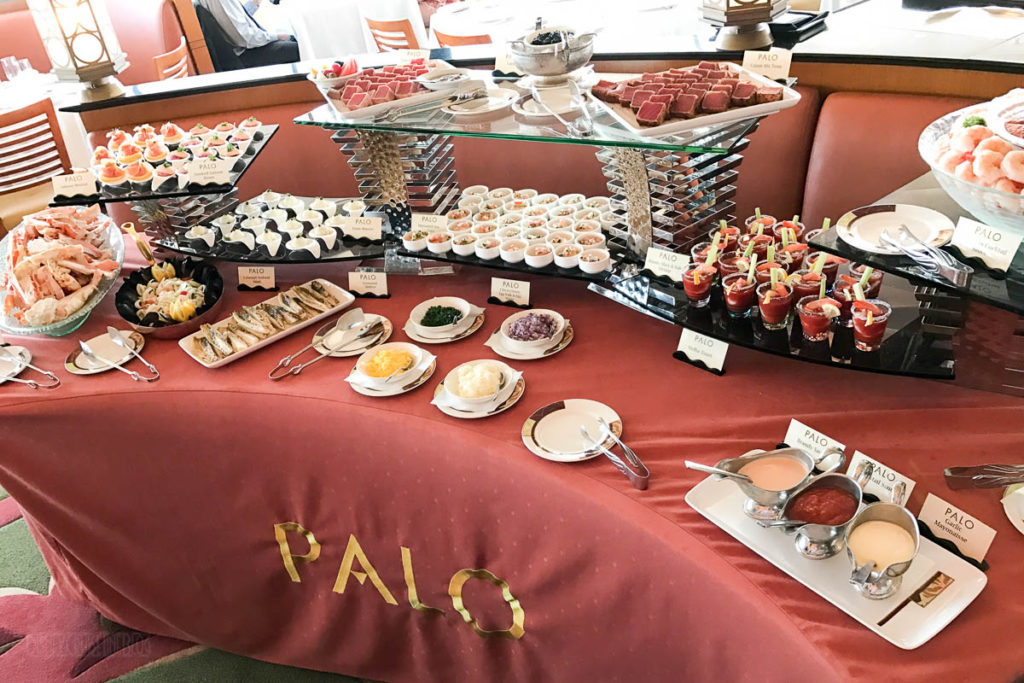 Sorry about that, let me get back to the brunch. This was our first time back at Palo since they changed the procedure (if you want to call it that). Basically, instead of having all the entrees on display around the pizza oven, you are given a printed menu with a selection of entrees. The regular self-service brunch options are still available. 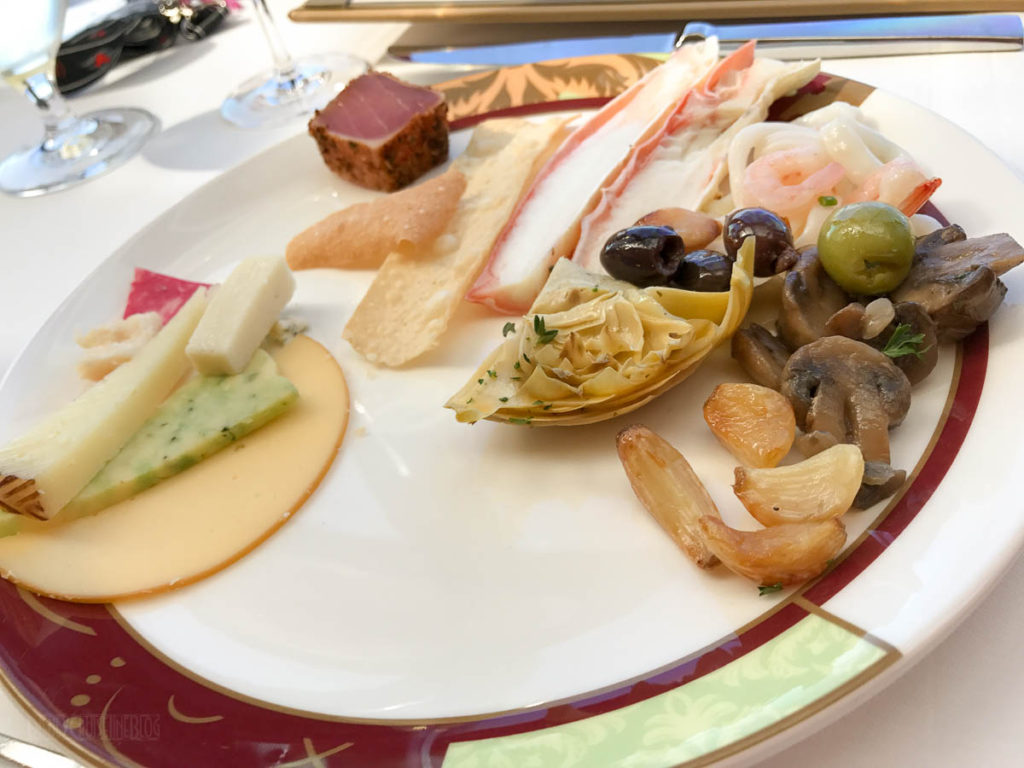 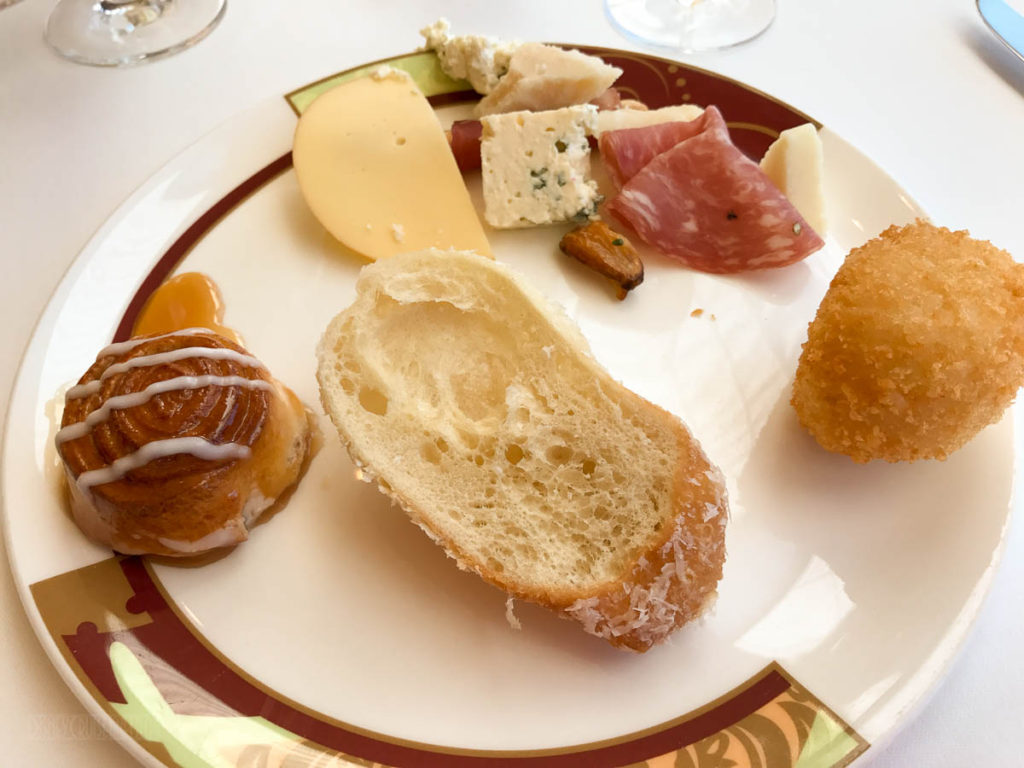 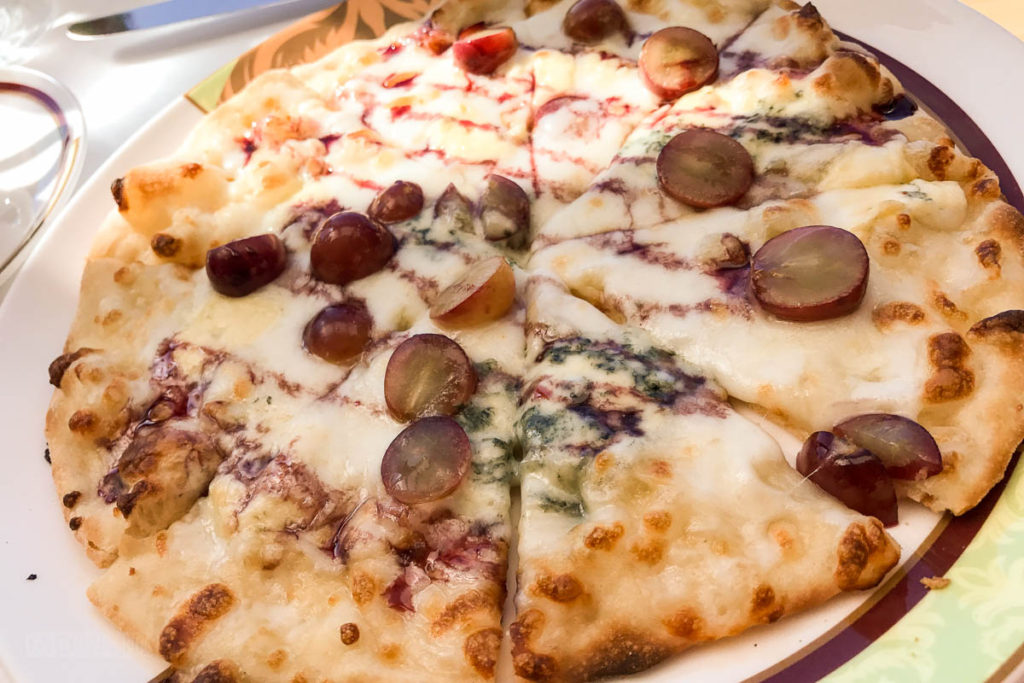 I tried the new calzone filled with prosciutto, basil, bell peppers and mozzarella cheese, but it wasn’t really my thing — I thought it was really heavy on the peppers, light on the other fillings. If you enjoy lots of peppers on your pizza then give this a try. 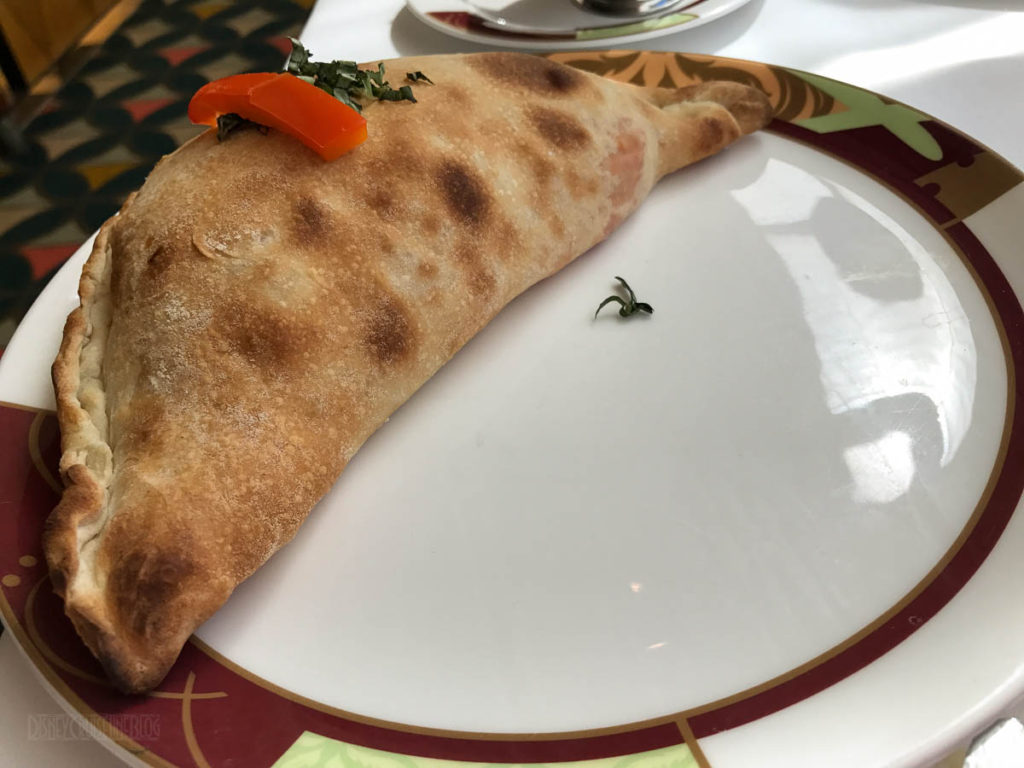 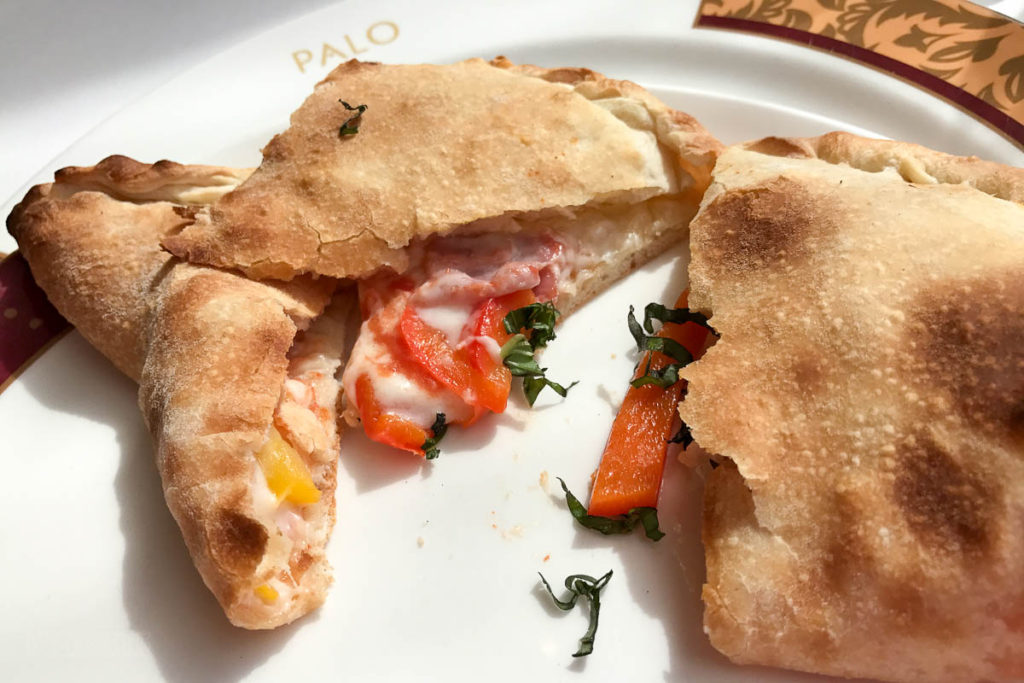 There was a fried ball of magic on the buffet. This golden sphere of deliciousness called an arancini, starts with a cherry tomato encased in risotto and lightly fried. 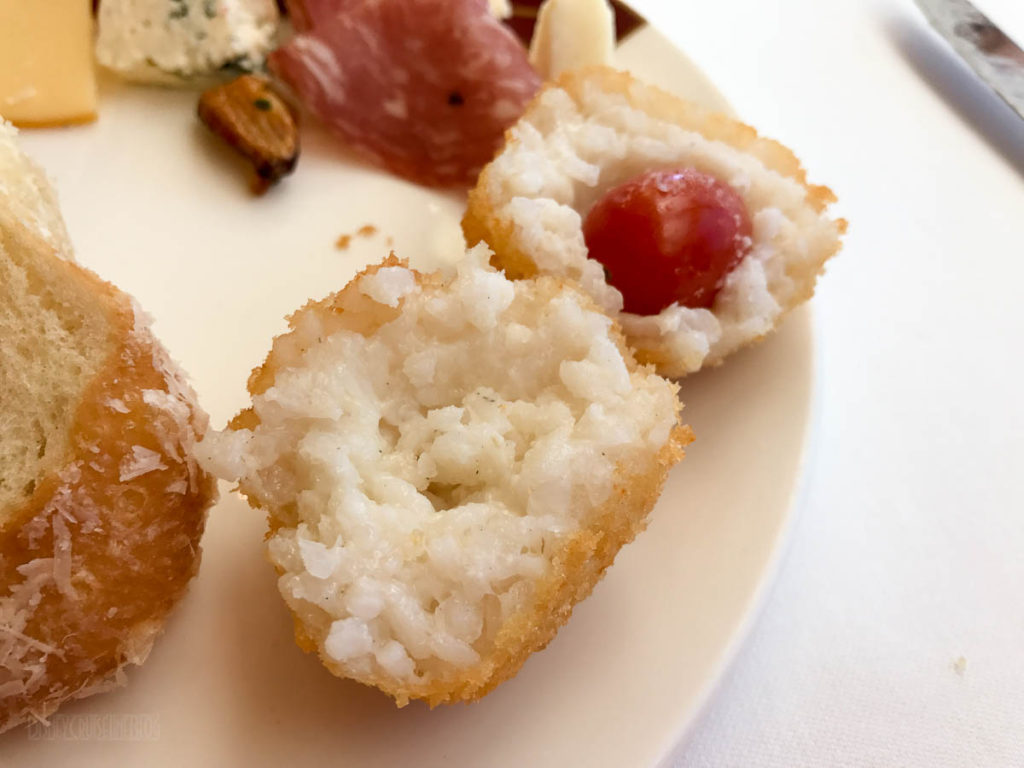 I still cannot leave brunch without my favorite dessert, the chicken parmesan. 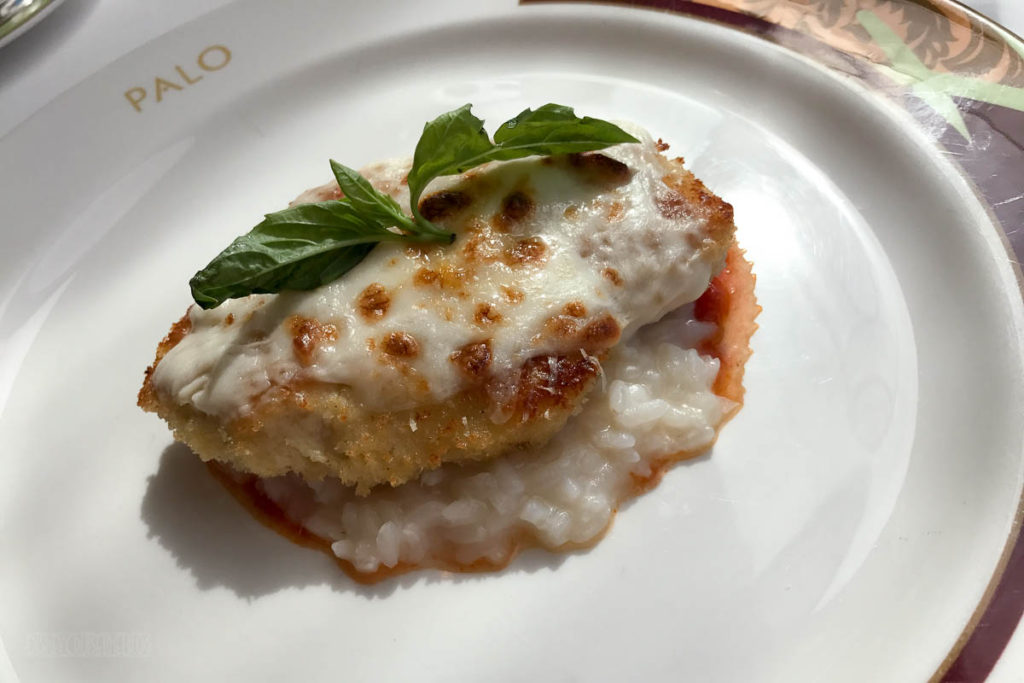 Ok, most would consider this an entree, but I prefer savory over sweet and this fits the bill. For those odd ducks that prefer sweet over savory here is a Palo Brunch dessert teaser. 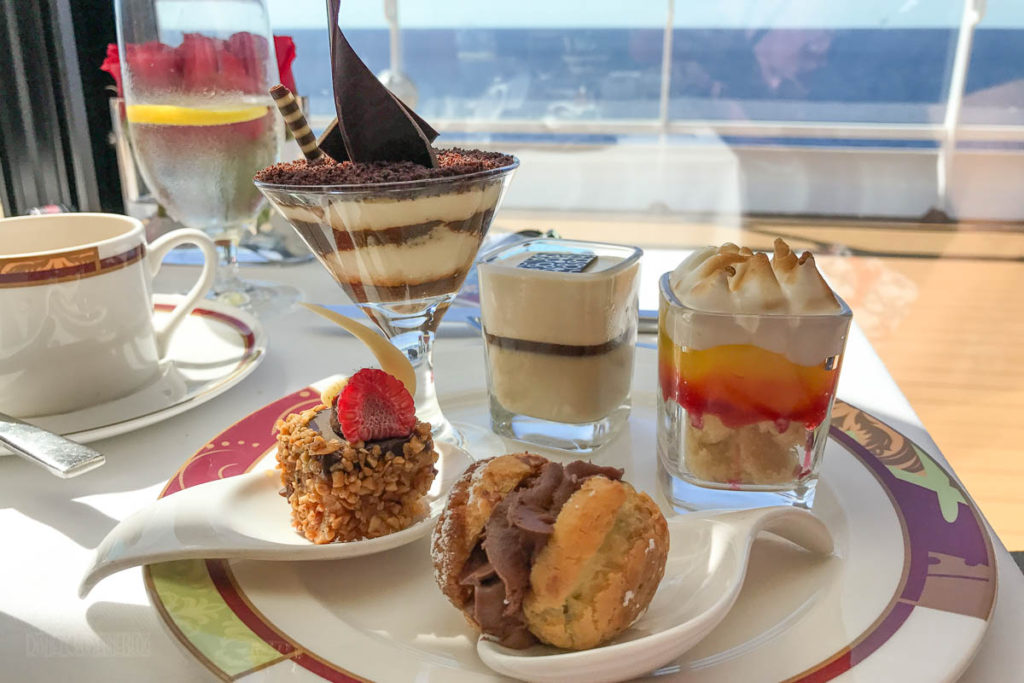 My favorite was the raspberry layered dessert on the left. Great flavor and overall texture within each layer! 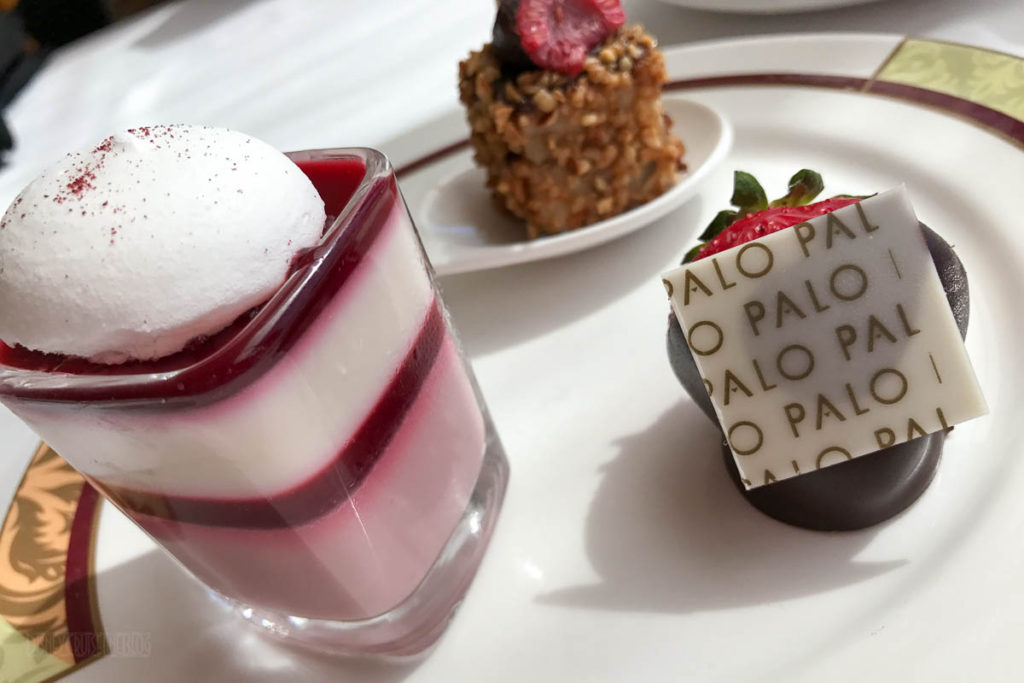 All in all, brunch was great and it was even better sharing the experience with great friends. Em’s favorite is the iced tea served with iced tea ice cubes; the tea never gets diluted! Best idea ever!

After brunch, I grabbed a couple slices of pizza from Pinocchio’s Pizzeria & some fresh watermelon from Daisy’s Delites to take back to the room for Isabelle as I suspected she would be starving by this point. Sure enough, she was ready for lunch and eager to get to the pool. 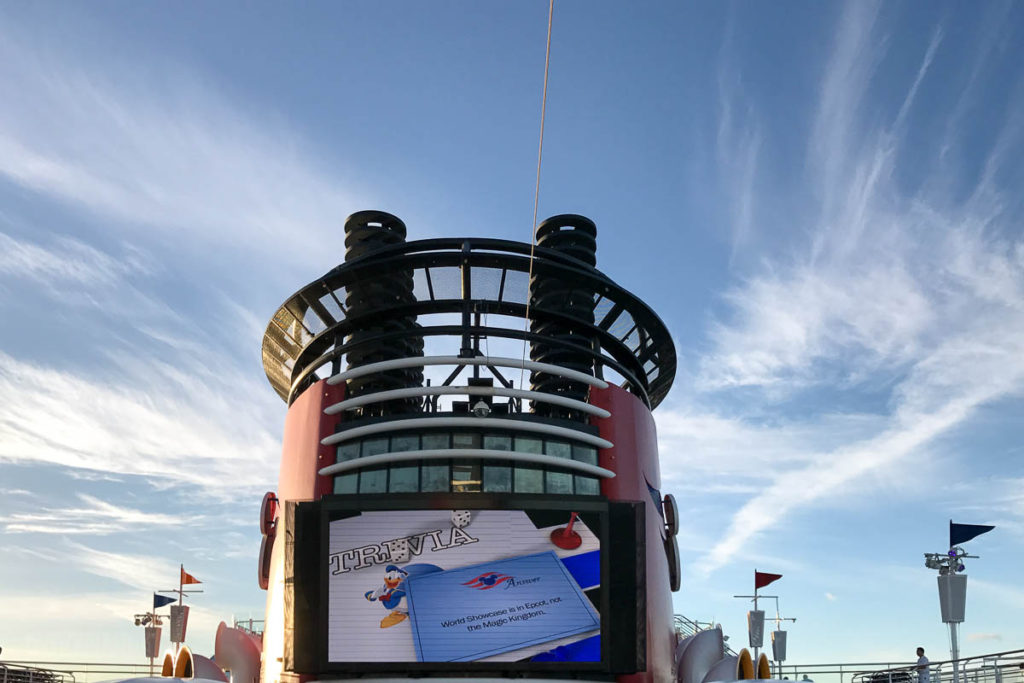 We found a table in the shade right next to the family pool with our friends where we knocked out the trip report for day 1 and tried a new to us drink of the day, Two Seasons. 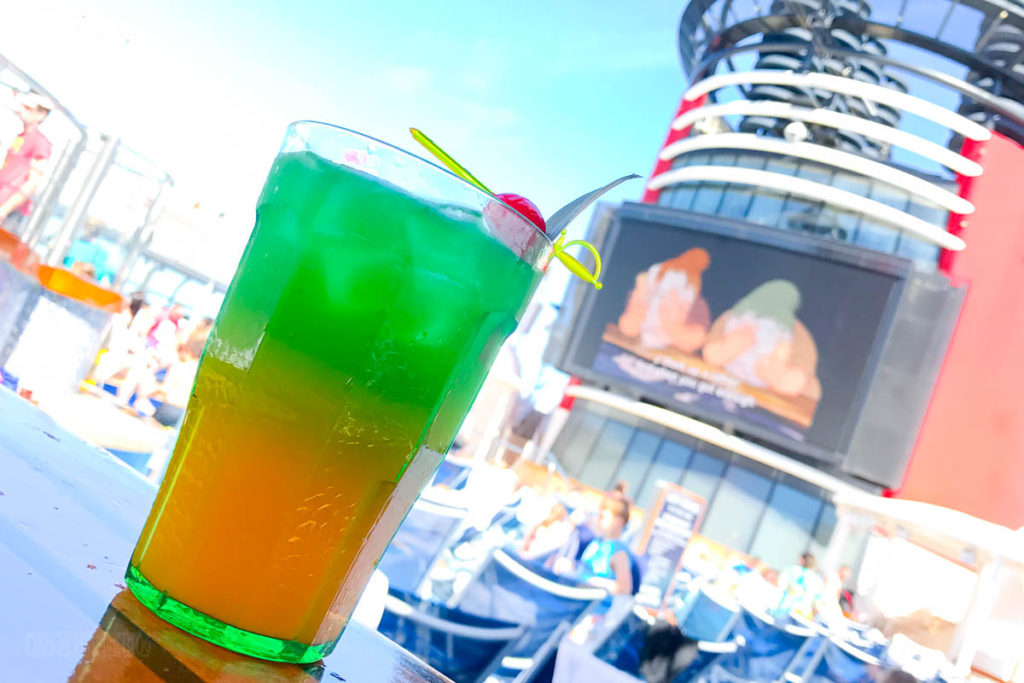 Looks really cool with the yellow and green layers right? Well, if you like absurdly sweet drinks, this is the drink for you. 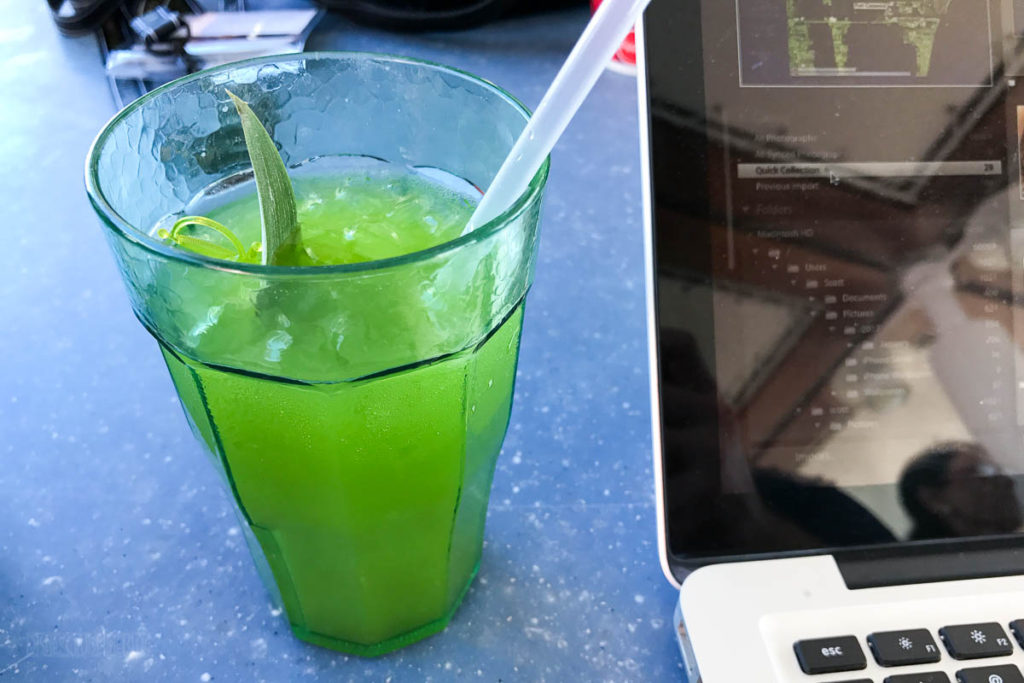 We tried it in layers and mixed up and between the four adults at the table we barely put a dent in the drink. 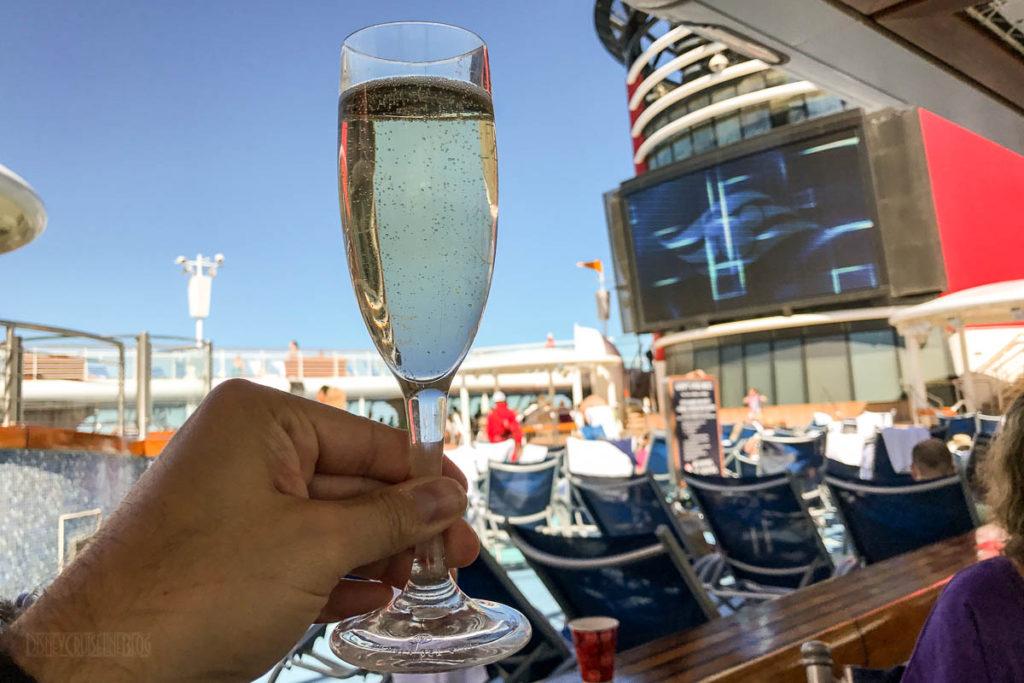 Nothing a little Taittinger can’t fix. Major props to the server who was willing to go to The Cadillac Lounge to get a glass as we discovered champagne offerings at Sulley’s Sips are by the bottle only (or so we were told). We spent the better part of the afternoon on deck while Isabelle racked up her steps with countless trips up the steps to slide down the Twist N Spout water slide & in the new AquaLab added to the Disney Wonder. The AquaLab is pretty much a carbon copy of the Disney Magic’s which is great, because until the Wonder’s latest dry dock the Magic had the best kids area in the fleet if you asked us. We all love the set up of the Goofy pool/hot tubs on the classic ships.

It was time to head back to the stateroom to get ready for our dinner in Triton’s. 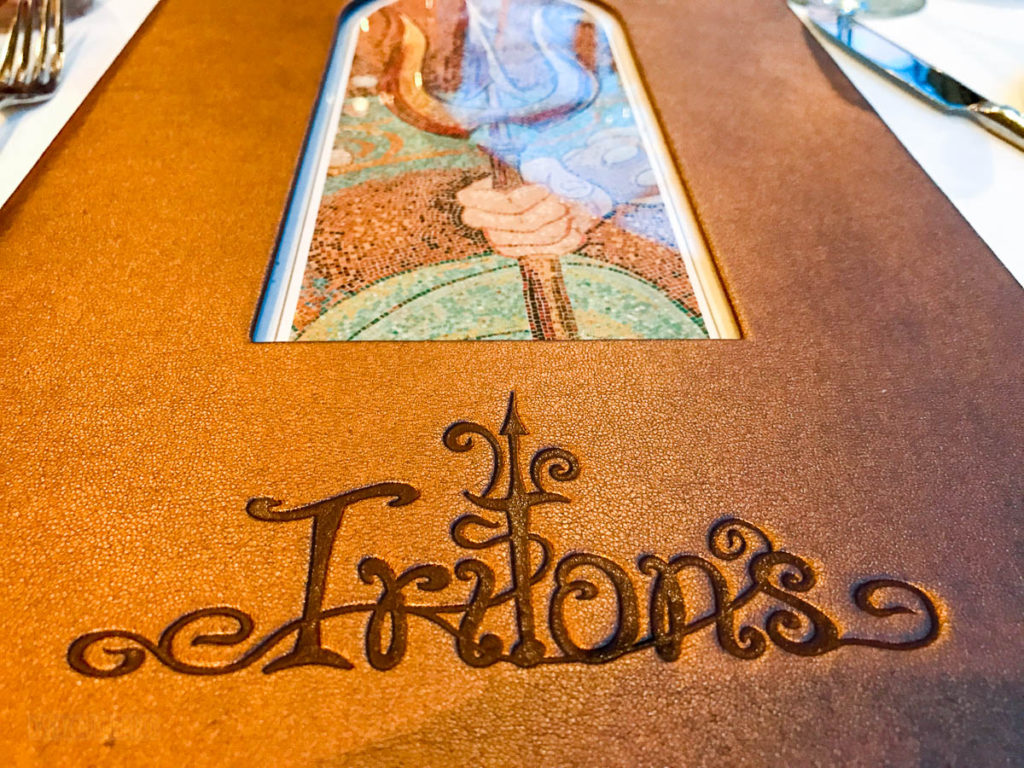 Dinner was uneventful as we stuck with our typical order except for the Classic Opera Gateau. 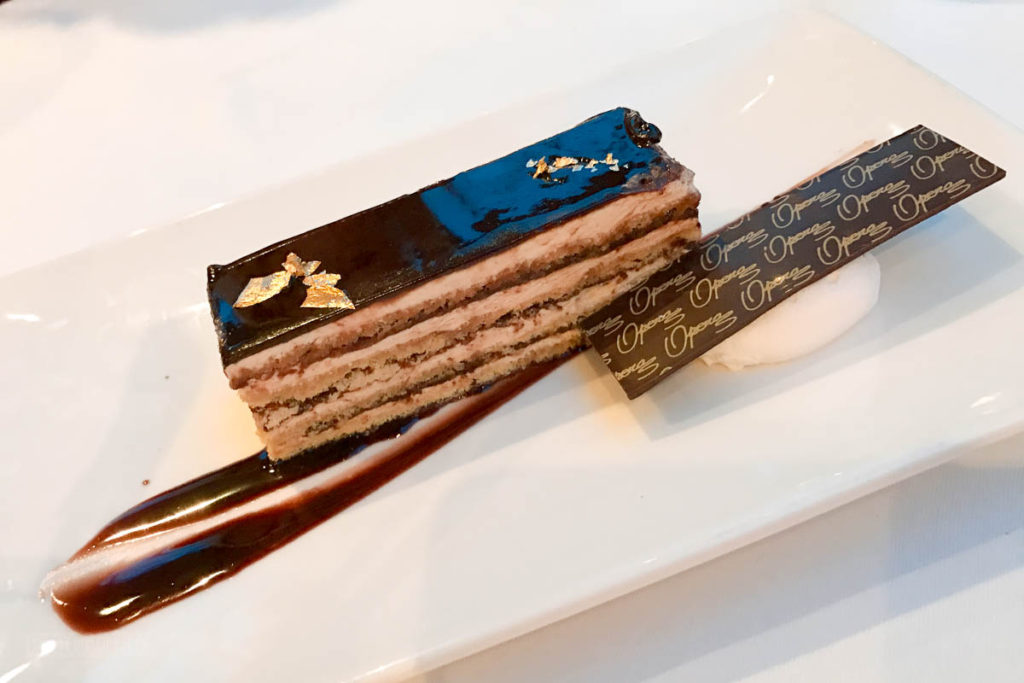 Triton’s continues to be a great venue to dine even without the wow factor present in Animator’s Palate and Tiana’s Place. Triton’s is the perfect rotational venue for semi-formal and formal nights while sailing on the Wonder.

After dinner, we headed to After Hours to Crown & Fin Pub for Villains trivia which continues to get harder and harder each time we play. Another new to us moment was the use of the tv screens throughout Crown & Fin to display the trivia questions. 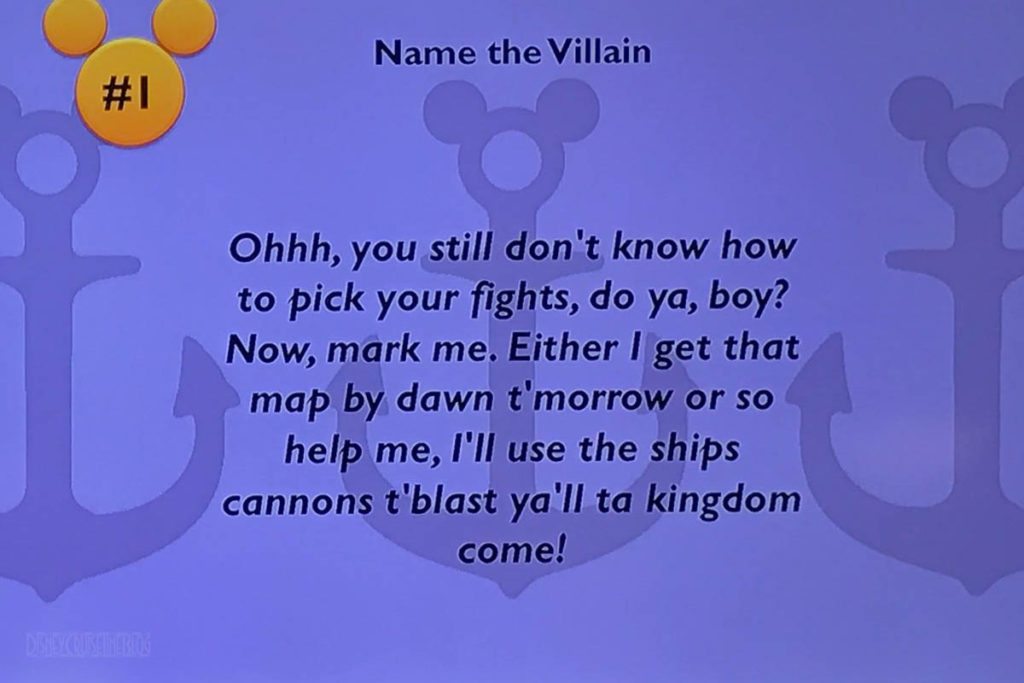 I thought this was a great enhancement to the game. During trivia, I tried the Crown & Fin ale on draft because how can I pass up an opportunity to try a beer named after the bar. 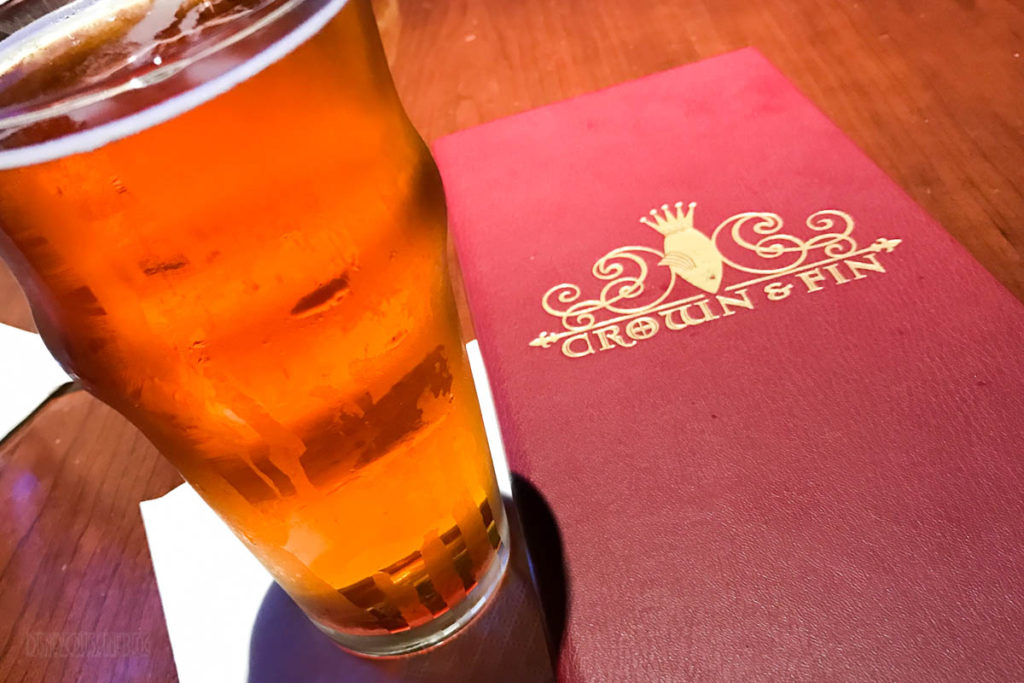 In Sea Treasures, the shop located on deck 3 aft between the entrance to Crown & Fin and the back door to Azure, you could purchase Crown & Fin shirts, beer mugs and hats with the logo as you can clearly see here in these blurry iPhone photos. It was basically set up as a Star Wars gift shop, though. 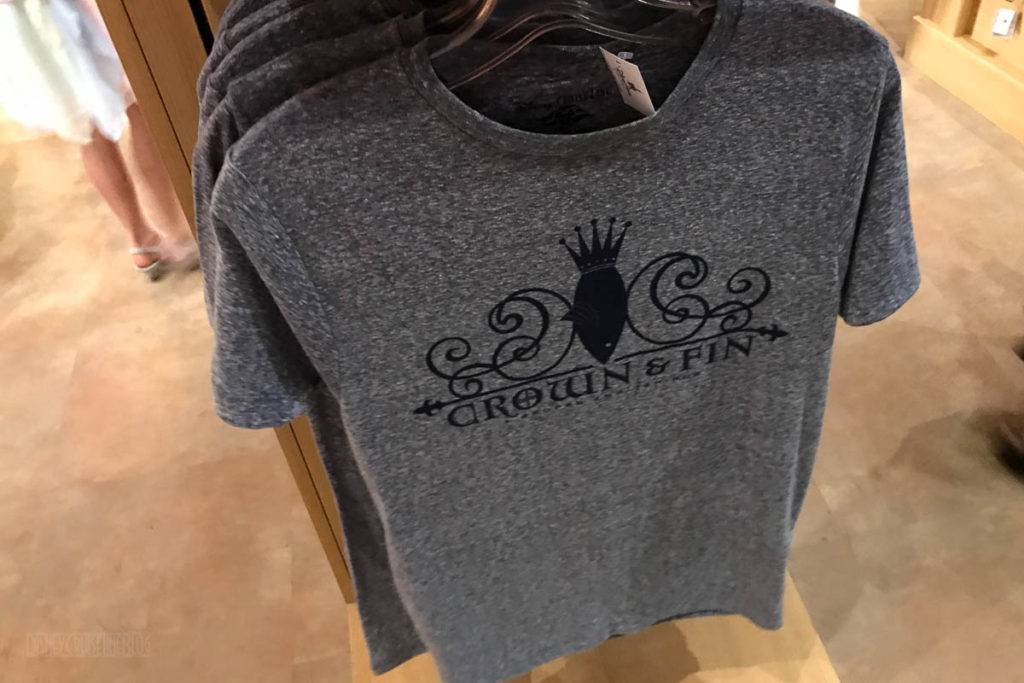 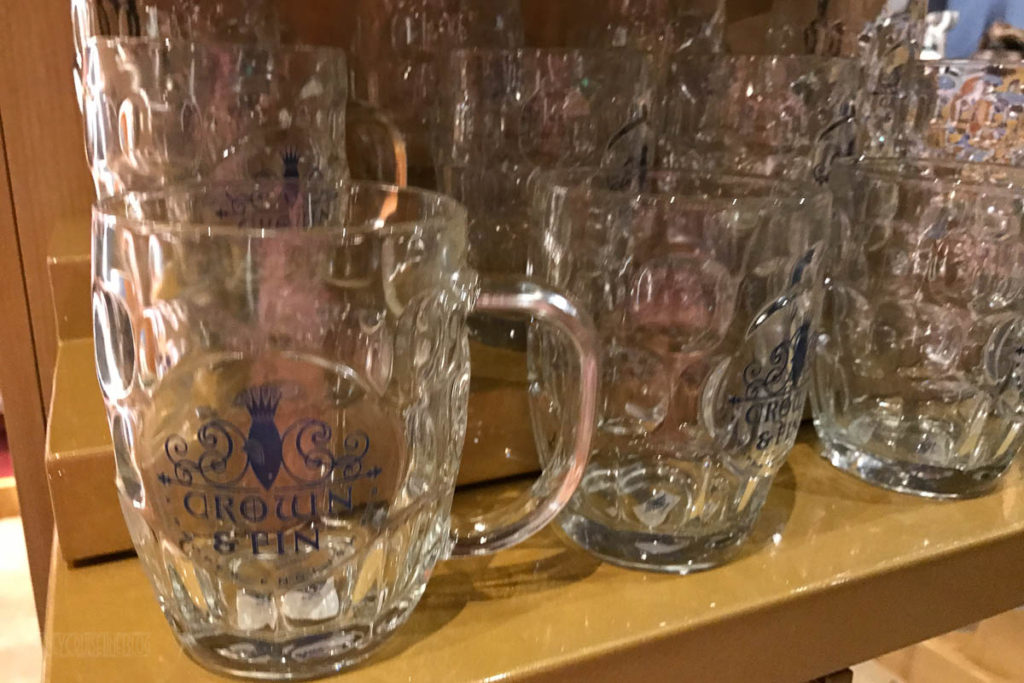 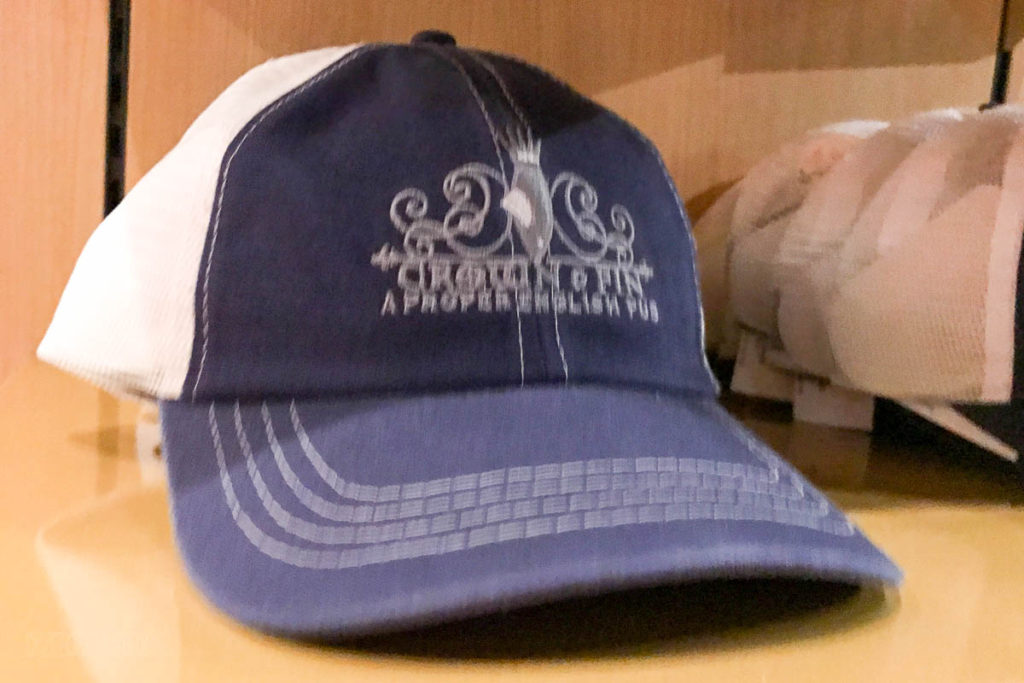 For the diehard Route 66 fans, there is a nice nod in the stairwell to the previous theme. 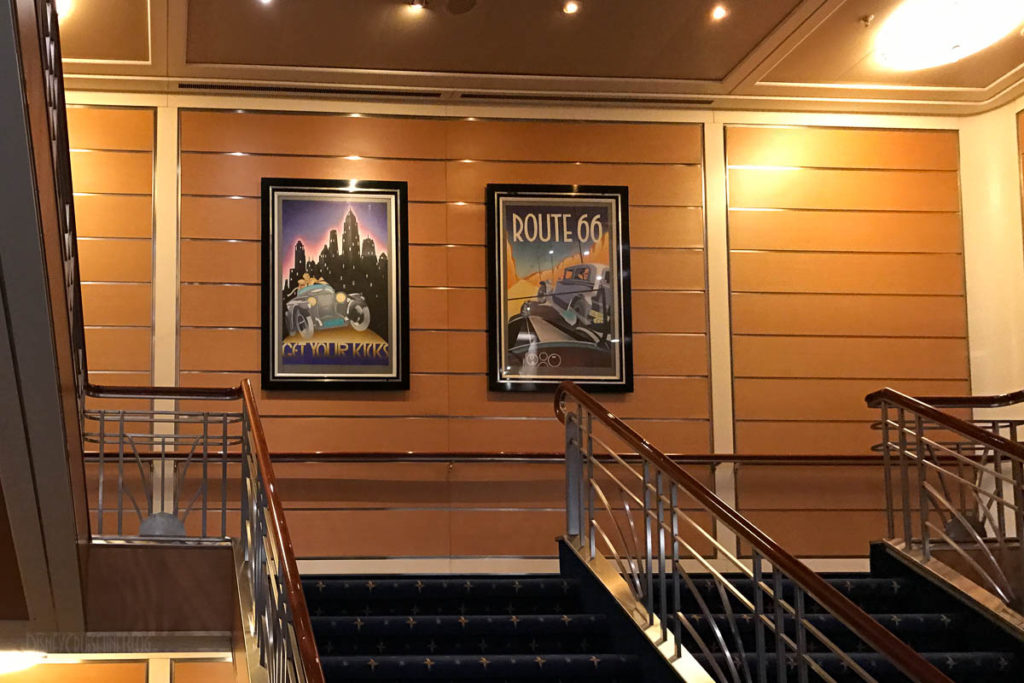 That pretty much wraps up day 2. I was tired from doing next to nothing all day but living the life of a human in the movie Wall-e. We put on the Marvel channel to find Guardians of the Galaxy, which we watched for a bit. I was out by 9:30 and I didn’t care. 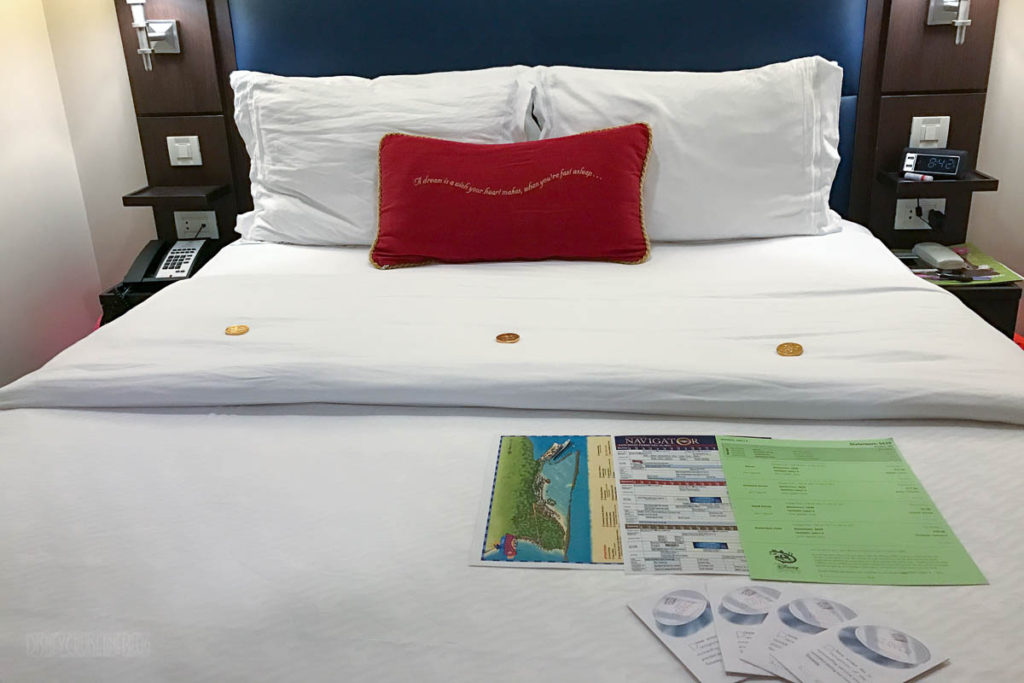