Ahead of any further official announcements regarding the enhancements coming to the Disney Wonder during her fall 2016 dry dock, Disney published an updated deck plan. The new deck plan sheds some light on the subtle difference between the classic ships such as the After Hours venue names to the addition of staterooms and additional connecting stateroom doors.

Since I am basing this all on the updated deck plan, I would like to take this opportunity to say this is just my interpretation of the new Disney Wonder deck plan compared to the version released in October 2015 following the Disney Magic’s dry dock. There are a couple ways to present this information, but for the sake of simplicity, I will stick with the changes based on the decks. 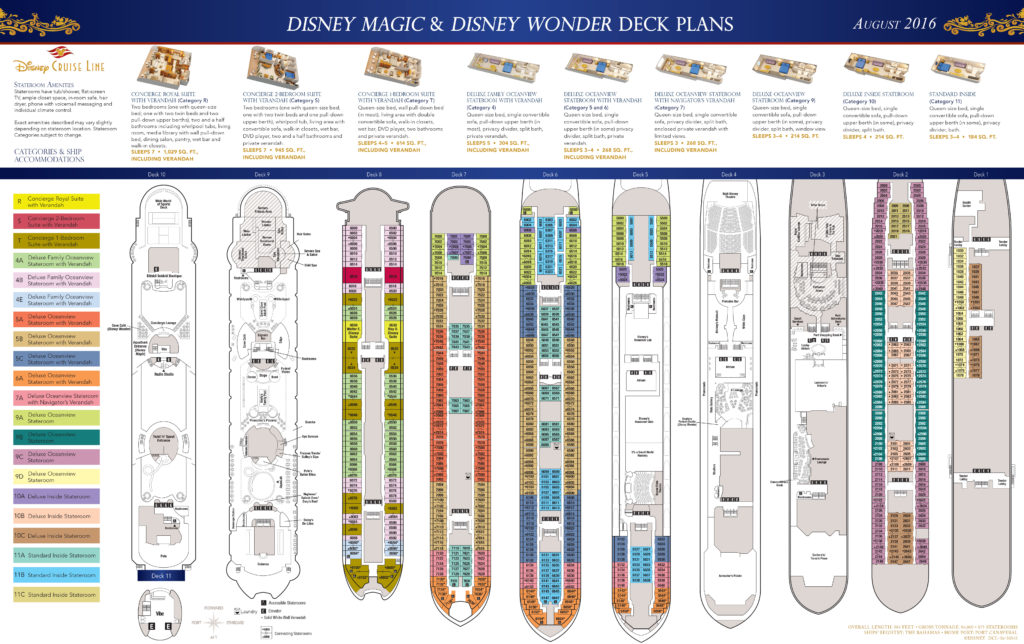 Deck 1
No noticeable changes to the staterooms.

Deck 2
Similar to the 2015 changes on the Disney Magic, 6 additional inside staterooms will be added in place of the Edge tween club. <=> denotes connecting rooms. 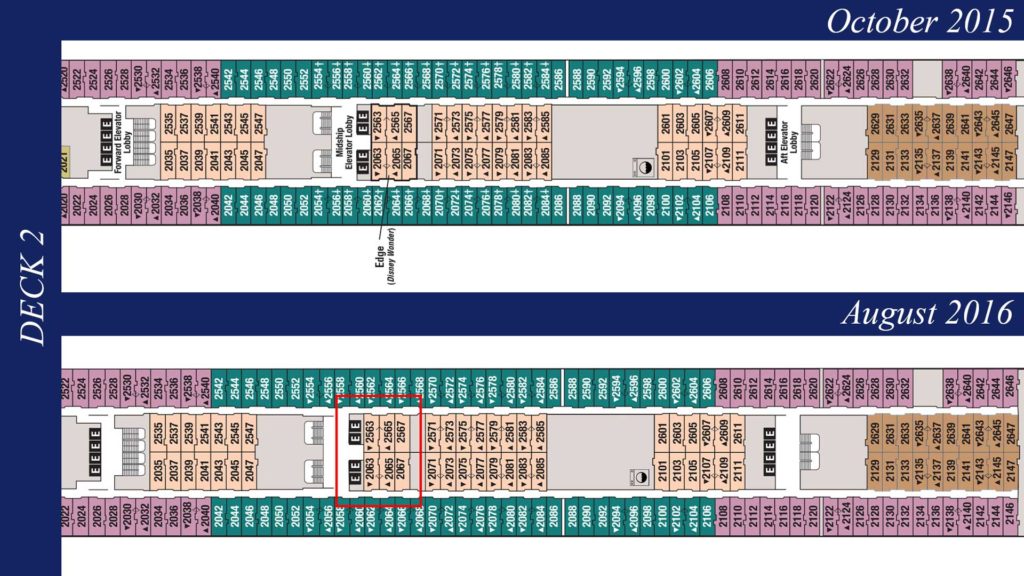 Additionally, there are 16 connecting stateroom doors being added to match those aboard the Disney Magic.

Deck 3
There appear to be some subtle changes to the Promenade Lounge to remove the computers for a TV area and the relocation for he Connect@Sea desk. Questions surround the atrium. Will Ariel move to port with the removal of the starboard staircase? Hard to tell based on the deck plan which does not appear to change from the October 2015 version. I guess, it should be noted that the deck plan does only show the one staircase, but the riser in front of Triton’s/Lumiere’s shows a center feature, but this could be me reading to much into a simple deck plan. At this point, I would be shocked if the staircase remained, but only time will tell. 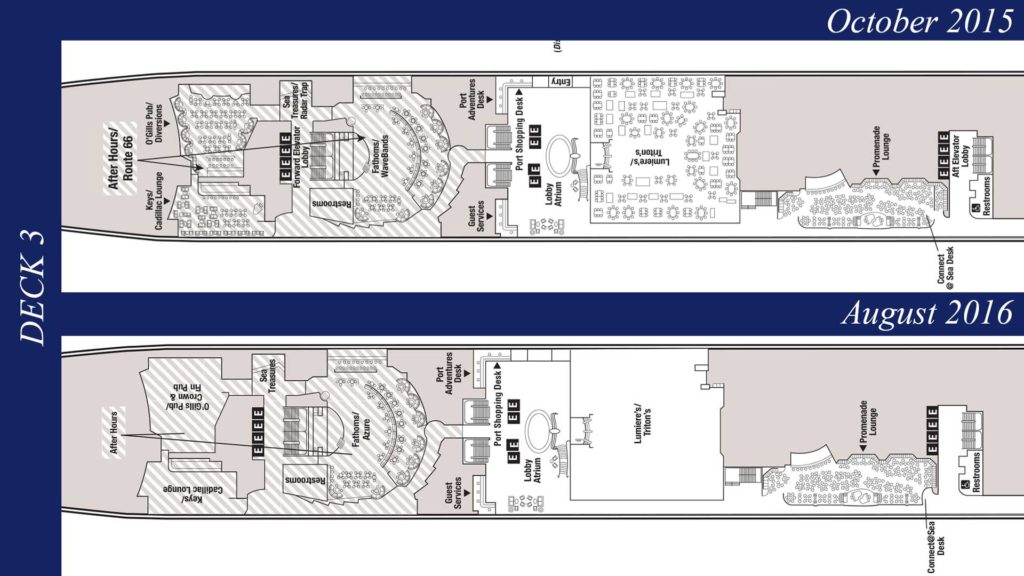 Moving forward, literally, we are moving forward on deck 3 to Route 66 which we learned during the original dry dock announcement would be renamed to After Hours like the Magic. This new deck plan reveals the name of the Disney Wonder’s After Hours venues. Cadillac Lounge will remain Cadillac Lounge while Diversions will transition to an English pub called Crown & Fin Pub. That is Fin, not Finn. This pub is a nod to FN-2187 and not McMissle. Just Fin. Maybe, it is a distant relative of O’Gill the lucky fish. WaveBands will be sponsored by Microsoft’s cloud computing platform and will be appropriately named Azure. Ok, only the last part of that is correct. Azure is the name of the venue which is likely a reference to the color of the sky on clear summer day.

The last notable change on deck 3 is the renaming of Radar Trap to Sea Treasures to match the branding across the fleet.

Deck 4
The retail venues outside the Walt Disney Theater will be rebranded from Mickey’s Mates and Treasure Ketch to Mickey’s Mainsail and WhiteCaps bringing harmony to the shopping venues across the fleet through amalgamation. 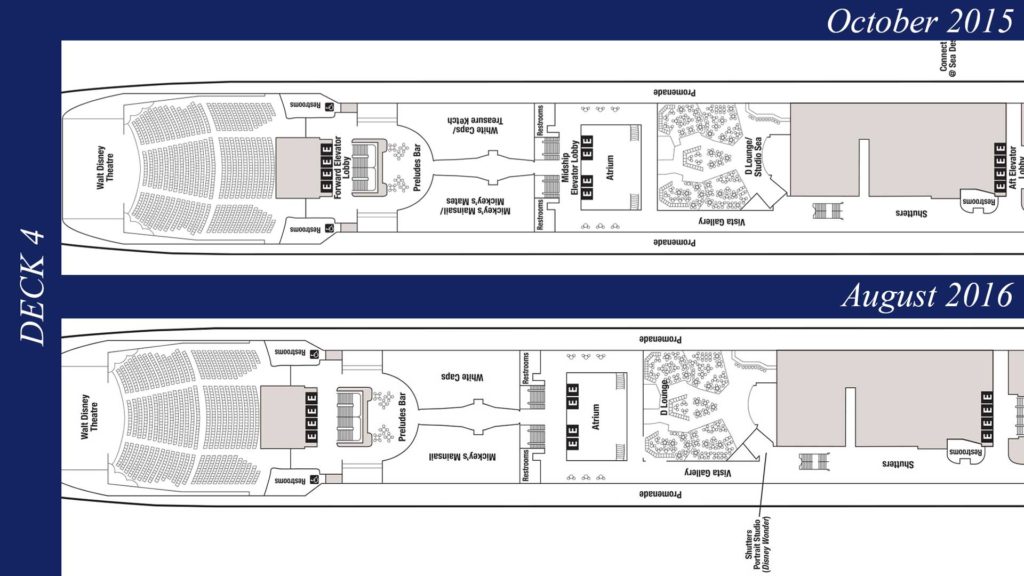 Synergy continues with the renaming of Studio Sea into the D Lounge. In place of a port side exit to the D Lounge DCL is adding a Shutters Portrait Studio. If you recall back to our trip reports from the Fantasy, I mentioned the side room of the Vista Gallery was closed off. Well, it turns out this is now a Shutters Portrait Studio and this addition is coming to the Wonder during dry dock.

Deck 5
The major changes to deck 5 are the overhaul of the Oceaneer Lab, Oceaneer Club, and the nursery which will be renamed to its a small world nursery. Rather than doing a copy/paste, click here to read about the changes to these venues.

Deck 6
There was a change in category for two staterooms, 6006 and 6506 were changed from category 9A to 10A. This category change applies to the Magic as well. Technically, this was changed a while ago, but this is the first time the change has been reflected on the deck plan. 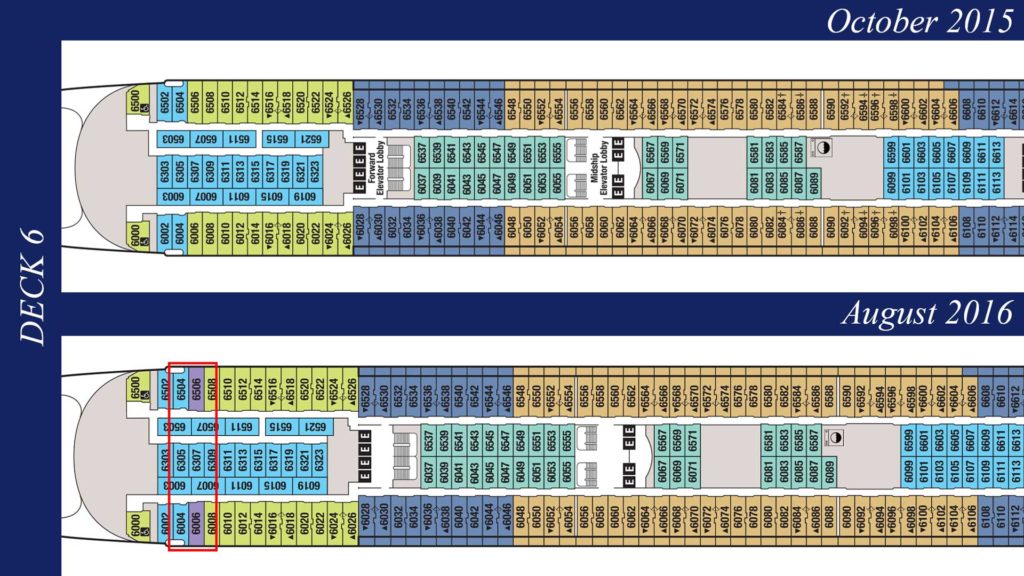 Additionally, there are 6 connecting stateroom doors being added to match those aboard the Disney Magic.

Deck 7
There are 10 connecting stateroom doors being added to match those aboard the Disney Magic.

Deck 8
There are 6 connecting stateroom doors being added to match those aboard the Disney Magic.

Deck 9
The deck plan confirmed that Edge will take over Quarter Masters Arcade. 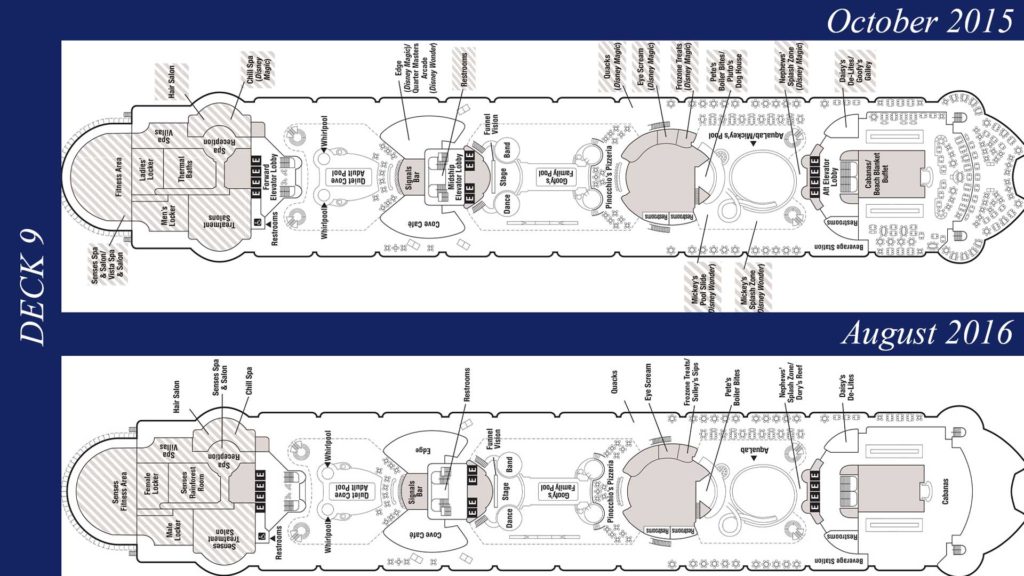 The pool deck will also feature the addition of Quacks, the pop up store. Eye Scream and Sully’s Sips. Pluto’s Dog House and Goofy’s Galley will both be renamed to Pete’s Boiler Bites and Daisy’s De-Lites. To make way for the new AquaLab and Twist ‘n’ Spout slide (technically, this is deck 10, but fits better here), Mickey’s Splash Zone and Mickey’s Pool Slide.

Deck 10
Bibbidi Bobbidi Boutique will be added to same area near the forward elevators. 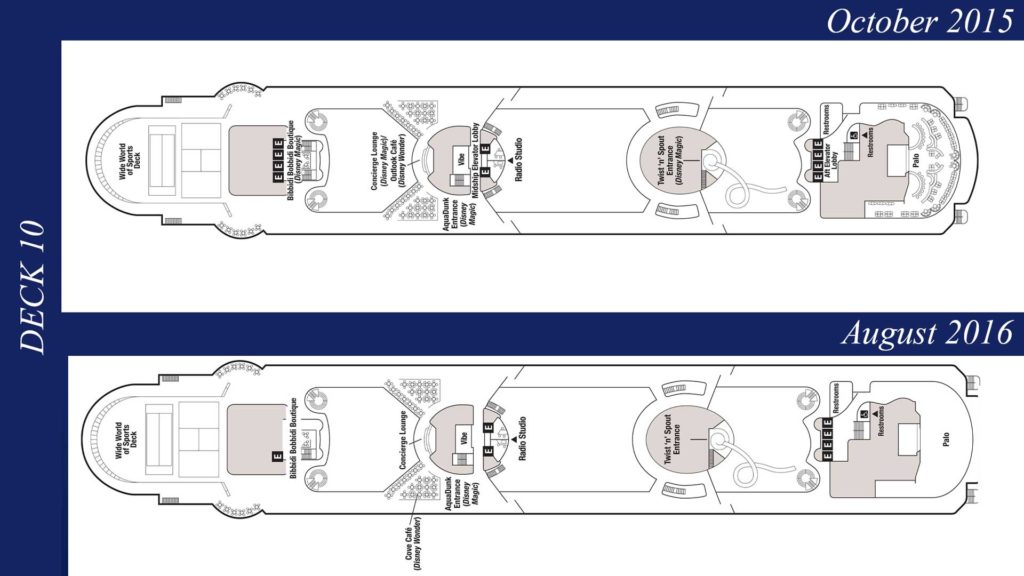 The deck plans were also updated for the Disney Dream & Disney Fantasy, but the only change had to do with formatting such as showing a blank space versus table layouts in the restaurants.