Disney Cruise Line recently published their Q2 – 2016 Voluntary Crime Allegation disclosure report for the period April 1 – June 30, 2016. During the 2nd quarter, Disney Cruise Line carried approximately 215,000 passengers and a daily complement of approximately 5,000 crew members, and received the following allegations: a claim of theft of property valued over $10,000 was made by a guest and two separate claims of alleged sexual assault were made by a crew member against another crew member.

According to the disclosure, these allegations were reported to the appropriate law enforcement and government authorities and to the best of DCL’s knowledge, no charges have been filed in any of the alleged incidents. 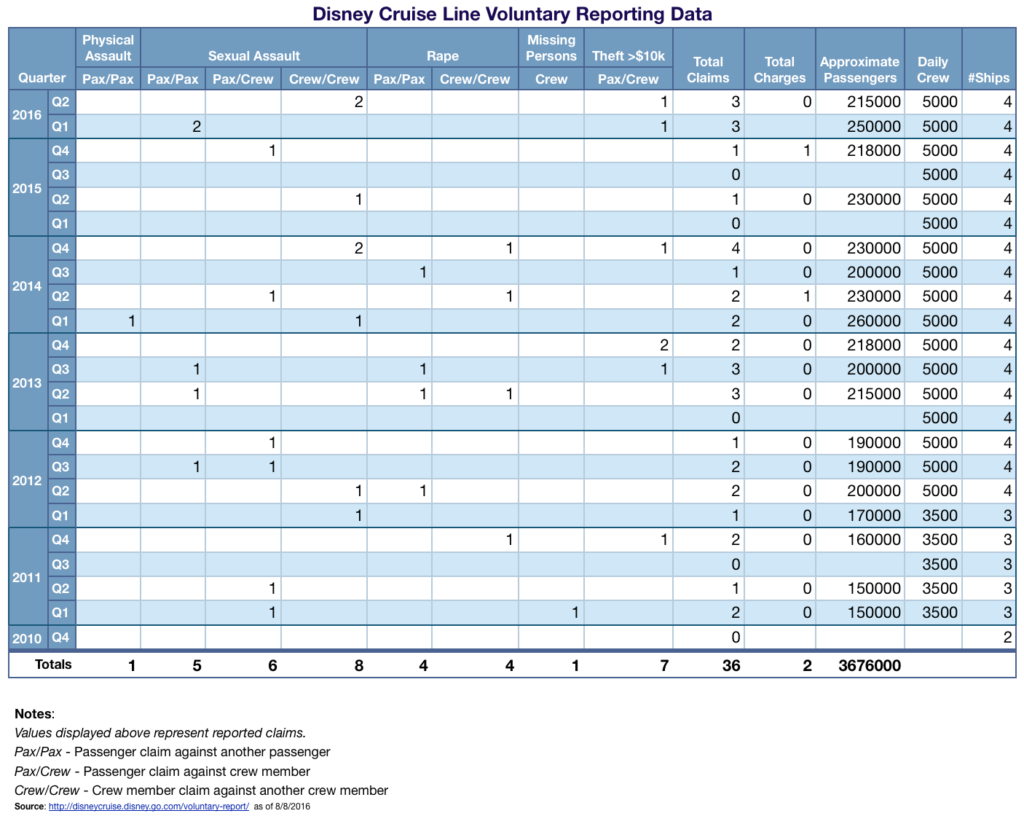 Taking a look that the number of sailings for each ship sheds some light on the decrease. Due to the seasonal itinerary cycle there is not much of a surprise as the classic ships head off to Europe and Alaska during the second quarter of the year. These sailings typically include a Transatlantic and Panama canal cruise which for sake of argument are each 2 weeks in length. In addition the the longer length sailings on the Magic in Europe this year created a reduction in actual sailings so the passenger numbers will drop, but this does not necessarily indicate a drastic drop in passengers on these sailings. It is a numbers game, but the passenger numbers for Q2 for ’14 and ’13 are the same for ’15 and ’16 respectively. Frankly, I am not even sure if these are real numbers to begin with since they are always rounded. I checked and it is not a pure calculation of max capacity times the number of sailings. Bottom line, I wouldn’t put to much into these numbers considering DCL is setting records and Iger keeps saying the cruise business is strong.