Reports streaming out of Eleuthera, Bahamas strongly suggest Disney Cruise Line may lease Egg Island from the Bahamian Government for future development as a cruise port.

Egg Island is a small island with two internal bodies of water at the end of a string of small islands extending west from the northern end of Eleuthera Island in The Bahamas. The island features two lagoons in the centerand over 3,000 lineal feet of beaches. Egg Island is located about 50 nautical miles southeast of Disney’s Castaway Cay and approximately 35 nautical miles northeast of Nassau. 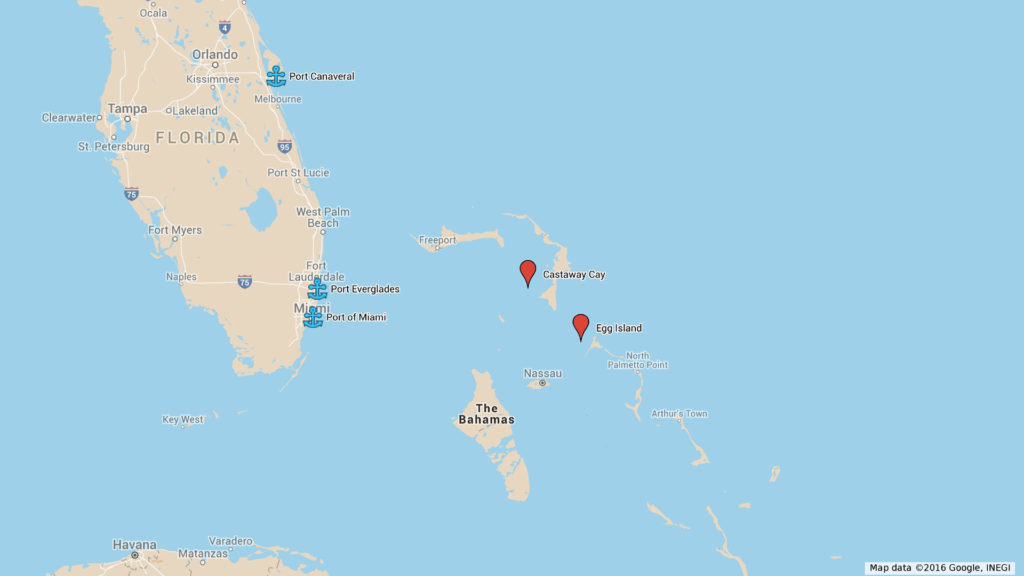 As the story goes, the island received the name due the its inhabitants, chickens, which became a provision stop for sailors looking to stock up on eggs. One scholar, Arne B. Molander, suggested Columbus made landfall at the northern tip of Eleuthera, possibly at offshore Egg Island. Off Egg Island lies the wreck of the Arimoroa, a 260 ft freighter.

This idea of a new private island for DCL first surfaced last summer leading up to the Disney’s D23 Expo. There was a rumor floating around of a ship announcement and a new island, but nothing other than a Disney Infinity virtual ship and island was announced during the expo.

Fast forward to March 2016, when Iger made the announcement of two additional cruise ships. Ok, maybe that original D23 rumor had some legs. Then in early June, DisneyAtWork.com (link does NOT work – article was pulled) published a story based on information from sources that Disney was or has purchased Egg Island. This article was short lived, as I suspect the Jeff Kober . I sent him an email earlier this week to inquire what happened to the article Jeff responded to let me know that he stands by the original story and he was NOT asked to remove the article, it was crashing his server.

Then, first thing on Monday morning I read an article from The Eleuthera News about core samples being taken from an area just off the shores of Egg Island and learned about a petition, started by Spanish Wells resident, Holly Peel, which at the time of publication has exceeded 2000 supporters all wanting to stop Disney and Save Egg Island.

Ok, there must be something brewing if local residents are connecting Disney to the project so I proceeded to spent more time than I’d like to admit researching the developments and Egg Island. I sent emails to the a few people including the addresses listed on the petition, but as of now those remain unanswered. I could not find the smoking gun connecting Disney to Egg Island other than a word of mouth conversation shared in the Facebook posts embedded below.

According to the petition, Egg Island’s natural beauty has been enjoyed by generations and is of great ecological significance to not only the communities of North Eleuthera and Spanish Wells, but to the Bahamas has a whole. Egg Island boasts several ecosystems including mangroves, coral reefs, salt ponds, rocky shoreline and beach. Egg island is known for having a sustainable grouper spawning aggregation, of which there are few left in the Bahamas. The endangered sea turtles are well known to nest on egg island beach, endangered shore birds nest there and the juvenile conch are maturing in safety.

Below is a video of Egg Island posted in support of the Save Egg Island movement.

Frankly, when DisneyAtWork.com story broke in June I quickly dismissed the idea after a brief bit of research where I found a couple development plans for Egg Island.

The first was the Egg Island Golf and Yacht Club that was mentioned in a 2004 article. The development plan included a golf course, tennis courts, yacht charter service, villas, estate lots with yacht berths, 50′ to 350′ yacht berths, provisioning facilities, heliport and a spa. 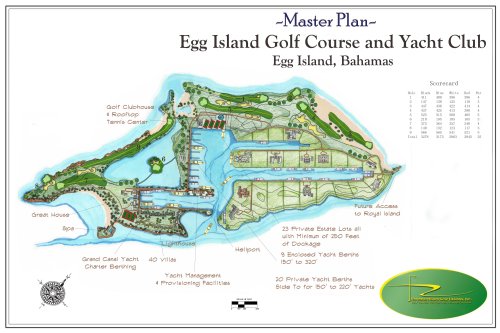 My search also turned up plans from around 2011 to develop Egg Island into Sapphire Cay, a master planned community that reflects relaxed island living at it’s finest. Following the philosophy of The New Luxury, the island is focused on providing an environment appropriate to today’s discriminating resident. The project consists of 216 lots, of which 183 are waterfront, 97 villas planned for direct sale, a small marina focused on yachts up to 65 feet, a large marina focused on large yachts up to 220 feet and the 21 room Sand Dollar Beach boutique resort hotel. Supporting amenities include an extensive private club (The Sapphire Club), harbor and marina facilities, restaurants, bars, shops and other necessities and features required for island living. Here is a 48-page master plan for Sapphire Cay if you are interested. 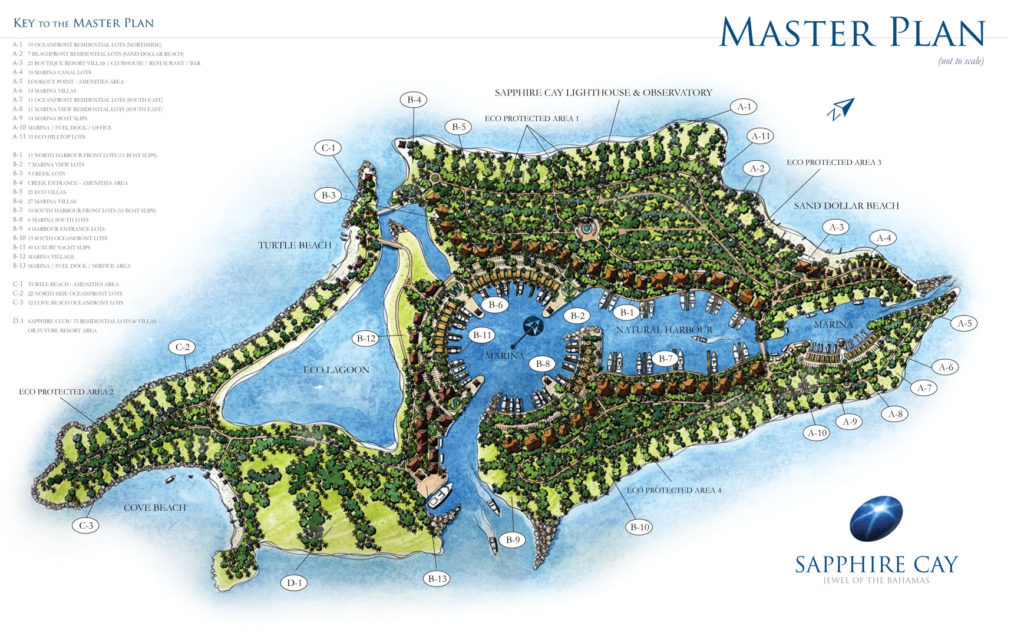 I did email both parties to see if plans were still in development, but once again, just like my emails to DCL, they went unanswered. Based on these two findings, I honestly didn’t think this was a story. Clearly I was wrong. Although, one thing I could not dig up were any stories of the locals protesting these development plans on Egg Island. If you know of any please let me know.

It was only a matter of time and Xian Smith, a business reporter for the Nassau Guardian reported on Tuesday that Disney does have plans to develop Egg Island per a government source. The report revealed that a temporary business license certificate was issued to Orlando’s Universal Engineering Sciences for the period of May 24 – July 28, 2016.

We don’t know much, but we do know: 1) This equipment arrived on Spanish Wells on May 12th, 2016 arrived via regular freight boat. 2) The Temporary Business License was granted to a property listed as 5th Street, Spanish Wells on May 24, 2016. 3) Equipment sat on the PUBLIC dock until June, 23rd 2016 4) Universal Engineering Sciences, Inc is a FOREIGN COMPANY based out of Orlando. The equipment arrived prior to the Business License being approved. These are facts. WHY DID THE COMMUNITY KNOW NOTHING? WE ONLY GOT WIND OF THIS BECAUSE WE SAW THE EQUIPMENT!! #saveeggisland #stopdisney #saveourislands #thebahamas #eleutherabahamas #drilling #coraldrilling #savethecoral #savetheenvironment #savetheecosystem

The core sampling seems to indicate preliminary testing of the sea bed for a potential dredging work to allow for a pier.

According to another report from the Miami Herald, Egg island is owned by the Bahamian government but had been leased to the pioneering Higgs family, said Spanish Wells Deputy Chief Councilor Robert Roberts. Local families for generations have used it, erecting small beach shacks for parties and spending summer vacations on the island, said Roberts, who speculated the island’s deepwater access drew the cruise line. When the Higgs family patriarch died, the lease returned to the government, Roberts said. It’s not clear if the family or the office of Prime Minister Perry Christie has been negotiating with Disney.

The Miami Herald article has provided the most concrete link to Disney as it directly mentions a meeting between Spanish Wells Chief Councilor Roberts and Chris Lowe, Disney’s director of global development and public affairs. Roberts said the executive wanted to wait for sampling results before providing more information.

“We know it’s going to be a cruise ship terminal port. He says they just do not know exactly how they’re going to go about it until they have the core reports,” Roberts said. “They have a layout in mind on the island, but they don’t know if they have a plan for where to put berthing or how much dredging to do.”

Disney has yet to make any public comment on these developments except for a “we do not comment on speculation” reply in the Miami Herald article.

The following Google Earth images show Egg Island over the years, starting with 2004. This was around the time of the Egg Island Golf and Yacht Club plans. 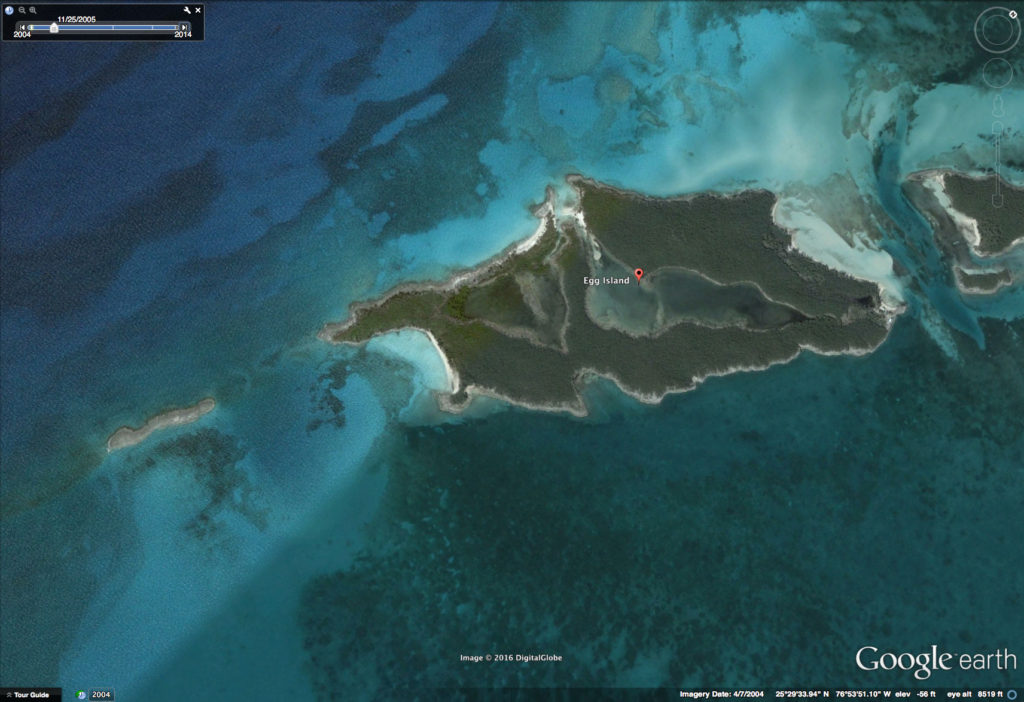 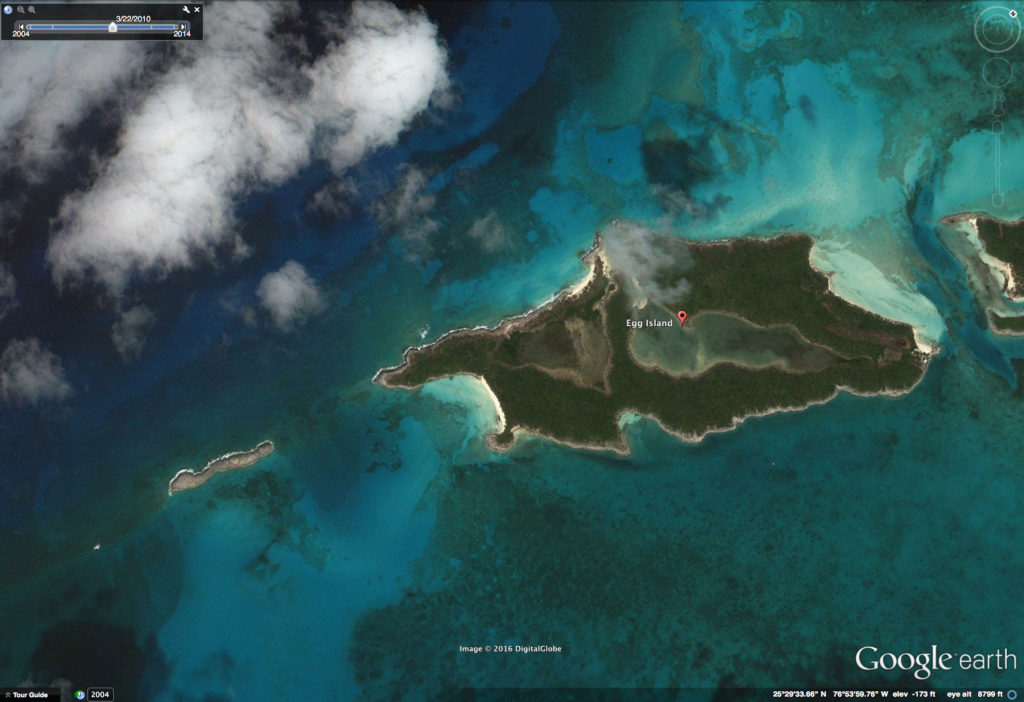 Over the 10-year period Egg Island remained relatively the same, at least based on this available imagery. It wasn’t until the late 2014 imagery where what appears to be lot lines were cut into the trees. 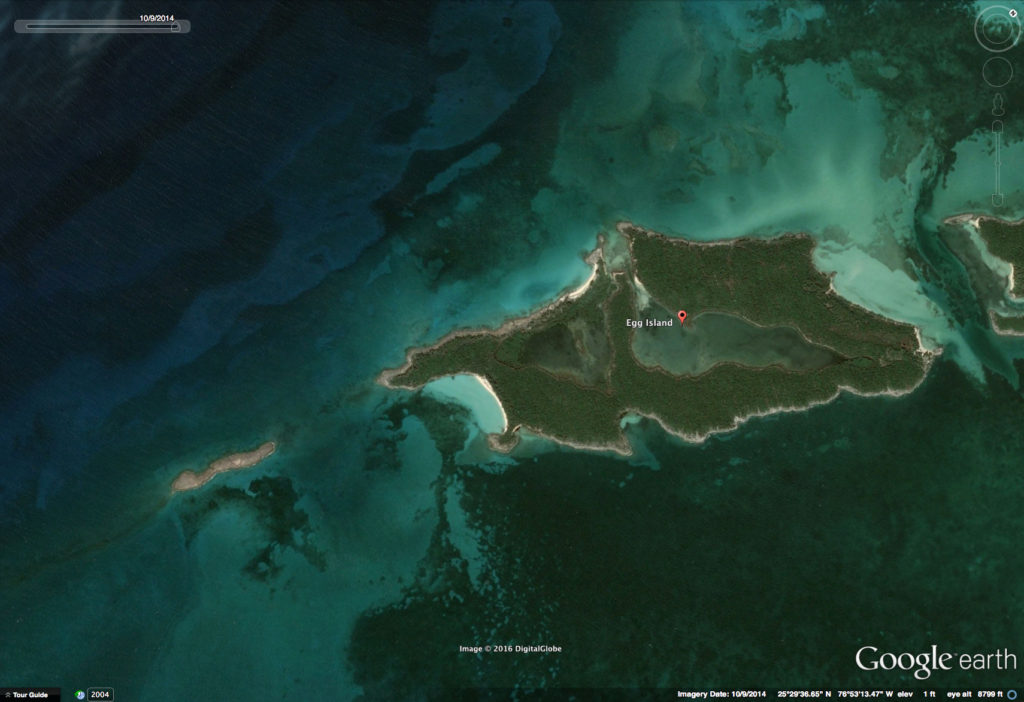 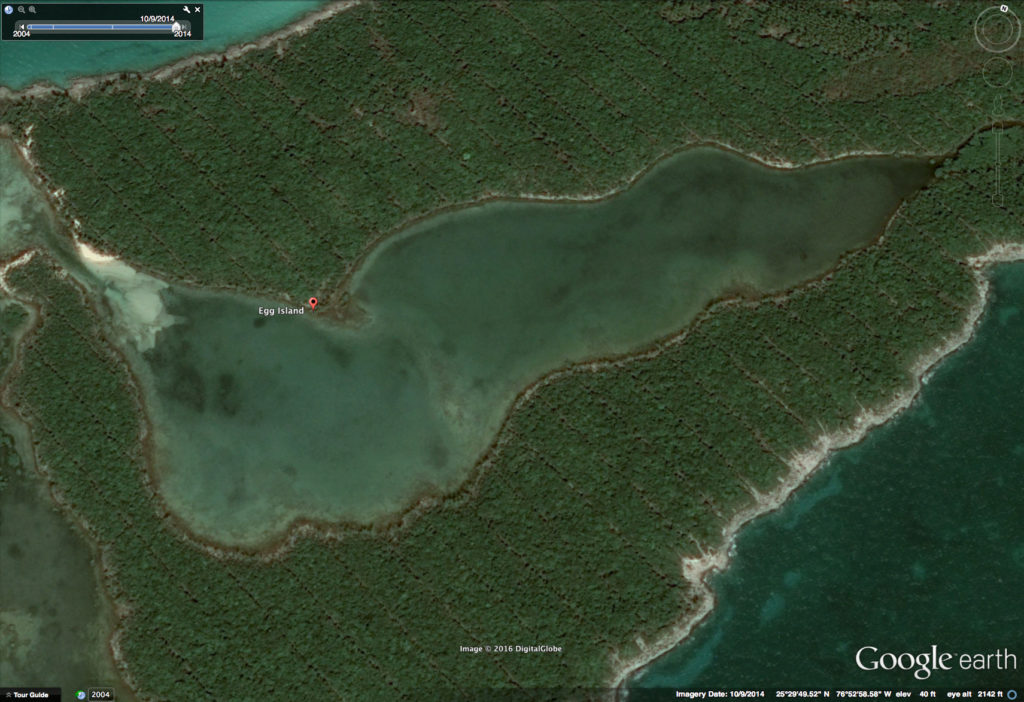 So there you have it. I imagine if Disney had absolutely nothing to do with Egg Island, they may have issued a statement to the Miami Herald rather than the no comment. There is clearly something going on at this point even if it is just exploratory.

It will be interesting to see this play out as the Spanish Wells residents and others in the area do not seem pleased as it would mean this island will become off limits just as Gorda Cay became after it became Castaway Cay.

The Tribune242 has a report based on a conversation between the host of the 7/20/16 5:30 PM Ed Fields Live radio talk show and Prime Minster Perry Christine. During the talk show the Prime Minister confirmed to Fields that his administration has had preliminary talks with Disney Cruise Line and local administrators in Eleuthera, with all sides agreeing that impact assessment studies must come first. Furthermore, PM Christie noted that no deals have been signed at this time to construct a cruise port on Egg Island. However, he did say his Cabinet would NOT sign off on any plan without the relevant assessments being done.

At one point while researching Egg Island and seeing the Sapphire Cay plan, I considered the possibility of Disney building a Disney Vacation Club resort along the lines of Aulani on Egg Island and using a classic ship as a ferry for guest who could get a short cruise coupled with an island vacation.

I’d love to hear your comments on Disney potential development and long term leasing of Egg Island. Are you all for another private island or do are you signing the petition?