The film begins by bringing moviegoers up to date bridging the gap between films. Alice Kingsleigh spent the past few years following in her father’s footsteps sailing the high seas on… wait for it… The WONDER. Not the Disney Wonder, but a tall ship. Actually, it was the tall ship, Earl of Pembroke which was used in the film – this forum has a picture of stern during filming. 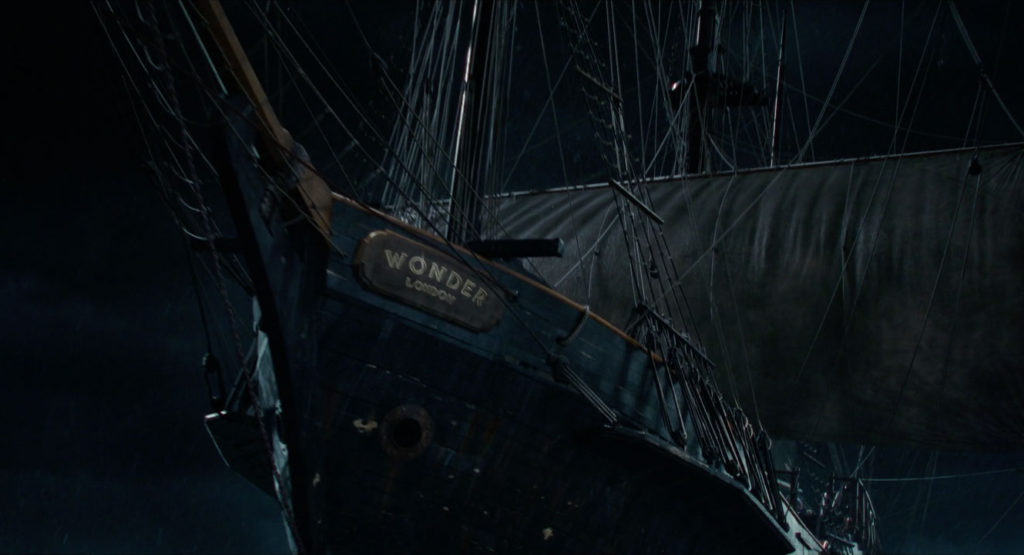 After a brief return to London, she returns to the Underland… you guessed it, through the looking glass and is reunited with her friends the White Rabbit, Absolem, the Cheshire Cat and the Mad Hatter, who is not himself. The Hatter has lost his Muchness, which drives the film as White Queen sends Alice on a quest to borrow the Chronosphere, a metallic globe inside the chamber of the Grand Clock which powers all time. Think of the Chromosphere as variant of Doc Brown’s DeLorean, but more like a ship, but resembling the time machine from The Blue Yonder. Anyway, Alice sets off on an adventure through the Underland to save the Hatter before time runs out.

I will be completely honest with you.. I have not watched Alice in Wonderland since 2010 and I wasn’t expecting much from Alice Through the Looking Glass. I tried to re-watch the first film prior, but I only managed to get halfway through. From my perspective, you do not need to know anything about the first film to enjoy Alice Through the Looking Glass. Hold the phone, did I say enjoy? Second disclosure… I saw the film for free, not because I’m an amazing blogger, but because I signed up for the Disney Parks Blog meet up at the Disney Springs AMC. If not for this meet up, I probably would have not seen the movie until our June cruise or if not then when it comes out on blu-ray. I guess what I am saying is that Alice in Wonderland did not leave a lasting impression and thus didn’t think much about this sequel.

I really enjoyed Alice Through the Looking Glass and felt it was orders of magnitude better than Alice in Wonderland. The story was fun to follow for my simple mind. Sacha Baron Cohen was great as Time, the continual play on words especially at the tea party left me in stitches. Remember, I have a simple mind so take this with a grain of salt. Advanced minded folks may find this silly. On a somber note, Alice Through the Looking Glass was Alan Rickman’s (Absolem the Caterpillar) last film. There was a bit of Disney synergy near the end of the film, but I think it is best if I just Let It Go. Not going to lie, I love the nautical touches in the film with Alice’s ship, the Wonder being my favorite. Elfman’s score as expected revives themes created for Alice in Wonderland while introducing new themes. I look forward to the end of the week when the soundtrack is released.

If Disney Cruise Line does not use find a way to use Alice Through the Looking Glass in a cross promotion I will be shocked. No, I will be disappointed at the lack of imagination in their marketing department. In fact I will take it a step further… With DCL building two more ships, it would almost seem appropriate to consider Mia Wasikowska as a godmother for one of the new ships.

I absolutely enjoyed the film and would definitely pay to see this film in the theater. Oh, who am I kidding, we already have our tickets to see it if we have time… We are booked on the Disney Fantasy next month. All kidding aside, Alice Through the Looking Glass really was a great film. I promise, I am not being a shill. I appreciated the story did not require Depp to carry the film, he is much better as a secondary character. One aspect I did not mention easier is that Alice Through the Looking Glass is absolutely worthy of the 3D theatre experience. The world originally created by Tim Burton in 2010, looks incredible in 3D under the helm of director, James Bobin.

Below is one of the trailers for Alice Through the Looking Glass.

I’m curious to hear your thoughts on Alice Through the Looking Glass in the comments below. More importantly, did I drink the free magic potion dispensed from the Coke Freestyle machine at the AMC, or was I right, this was really an enjoyable film?