On February 6, 2016, passengers sailing aboard the Disney Magic on the final evening of their 3-Night cruise to the Bahamas reported a potential man overboard on the way home to Port Canaveral following a day at Castaway Cay. We are purposefully using the word POTENTIAL because, as of this time, we have only been able to confirm (via multiple passengers) that passengers were required to meet at their muster stations around 11PM for a head count. 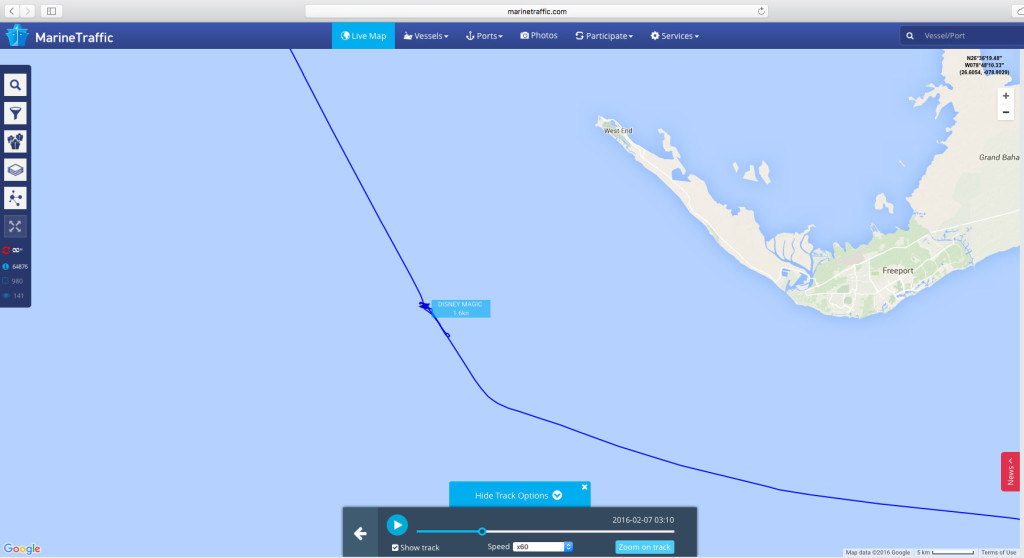 In addition, MarineTraffic.com tracking does show the Disney Magic slowing down around 2:47 UTC (9:47 PM EST), turning around and performing what looks to be a search west of Freeport (see screencast below) before resuming course back to Port Canaveral around 4:32 UTC (11:30 PM EST).

Based to a series of tweets from Adam Neal and a discussion with @Frnakvalenti71, a Brightstar announcement was made to around 9 PM, an hour later there was an announcement of a possible man overboard on the port side. Around 10:30 PM passengers were asked to go to their assigned muster stations.

1st encrypted notification came across all speakers abt 9p. Abt 10p announced about possible man overboard. Abt 11p guests reported to deck.

Approximately 11:30 PM, passengers were informed the accountability process was complete. However, they did not say if accounted for everyone.

Update: Disney Magic announces everyone could go back to rooms following deck count after 30 min. No update on man. pic.twitter.com/vGKtahp7W2

As mentioned earlier, here is a screencast of the Disney Magic’s track using MarineTraffic.com where you can see the ship reduce speed, turn and performed a search west of Freeport.

Disney Magic ship moving again after stopped or shifted course for about 2 hours. Everyone on ship talking about possible man overboard.

No more announcements about possible man overboard on Disney Magic cruise. Never said man was accounted for. Most things closed on ship now.

As of this morning, there is no word on wether or not all passengers and crew were accounted for or if this was a false alarm. I sent an email to Disney Cruise Line this morning requesting a statement on what is currently a potential man overboard situation. I will update this post with any new information as it becomes available.

The Disney Magic returned to Port Canaveral this morning a little later than normal and is scheduled to sail this afternoon on a 4-Night Bahamian Cruise with stops at Nassau and Castaway Cay.

Following the Disney Magic’s rescue of an Oasis of the Seas passenger near Cozumel, I asked DCL to verify if they have a man overboard system installed on their ships, but I guess it was not something they want to discuss. Anyway, from what I have been able to determine the Disney Cruise Line ships are equipped with the Varuna Man Overboard Detection (V-MOD) System. This is based on a (pdf redacted at the request of Surveillance International on 8/24/17) that indicates the V-MOD system is installed on all four ships.

Below is an excerpt from the fact sheet:

V-MOB Detec on Systems are currently installed on more than 30 cruise vessels operated by Carnival Corpora on and Disney Cruise Lines.

@TheDCLBlog that blinking light was the original point they were searching around with spotlights pic.twitter.com/gxRBq0sMHj