Disney Cruise Line has quietly updated their list of prohibited items to specifically prohibit toy guns. Toy flintlock muskets and swords have always been popular accessories on for guests Pirate Night along with swords. I do not know specifically when this wording was changed, but it was updated sometime this fall maybe even this week. I suspect this change was more recent following today’s report from the Orlando Sentinel of metal detectors being added at the park entrances and a revised policy at Walt Disney World. The Disney World Park Rules were changed to specifically prohibit toy weapons including obvious toy such as blasters and squirt guns.

g. Weapons of any kind, or objects that appear to be weapons (also including toy blasters, squirt guns, etc.)

I was able to find DCL’s policy from September and there has been a change in the language. The notable difference is the addition of toy guns to the second bullet point. 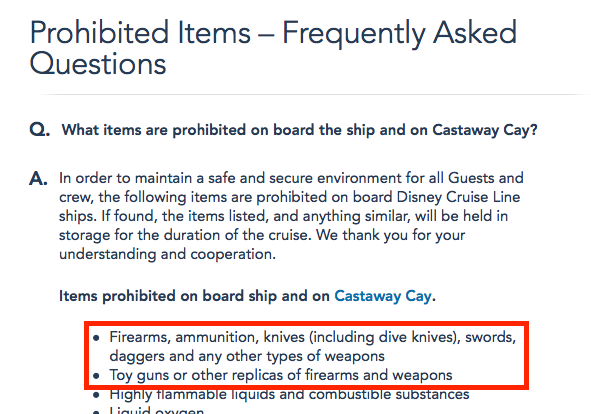 What remains unclear, at this time, is whether or not Disney Cruise Line will prohibit other replica items for guests such as toy pirate swords or for the upcoming Star Wars Day at Sea sailings lightsabers. Since they are both technically replica weapons I contacted Disney Cruise Line for some clarification and when I hear back I will update this post.

UPDATE (Not from DCL): Walt Disney World still selling swords, daggers and the like in Pirates of the Caribbean gift shop according the the following tweet by Seth Kubersky via the TouringPlans.com account.

No more toy guns in Pirates of the Caribbean gift shop, but plenty of toy swords @WaltDisneyWorld ~@skubersky pic.twitter.com/gl2mnSViDB

Please remember that while all Guests are invited to wear costumes for both Pirate Night and this special Star Wars Day at Sea celebration, masks that completely cover a person’s face may only be worn when standing still at character photo locations and must be carried when moving around the ship. We also ask that you choose costumes that are not obstructive or offensive. To avoid any disappointment or delay in the boarding process, please refrain from bringing toys or props that resemble guns, knives or other related implements, as these items will not be allowed onboard.

Both excerpt were provide to us by a reader booked on a Star Wars Day at Sea cruise via an original email along with a follow-up with DCL on 12/19/2015.