In the early morning hours on Saturday May 16, 2015 passengers aboard the Disney Magic heard a bright star alert announcement. We received an email from a passenger onboard early Saturday morning that the Disney Magic was slightly altering its course and was headed towards Charleston, SC for a medevac. 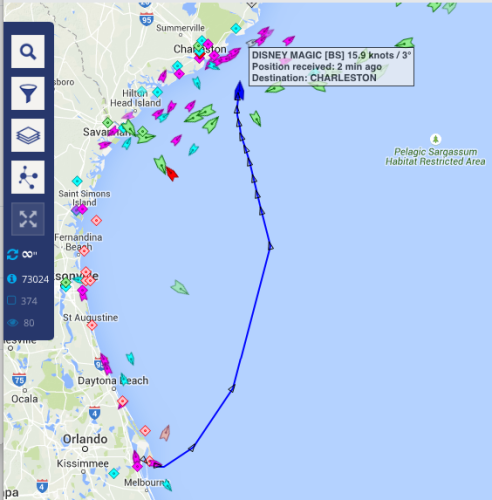 In a follow up email, we learned that the man had fallen and fractured his hip. He was in stable contention when he was picked up about 45 miles off the coast of Charleston, SC by the US Coast Guard. The Coast Guard transported him to Charleston for surgery.

The US Coast Guard released a video by Petty Officer 2nd Class Brannon Hood of the medevac. A crew aboard an MH-65 Dolphin helicopter from Coast Guard Air Facility Charleston, SC approaches the Disney Magic approximately 45 miles off the coast of Charleston.

The US Coast Guard also released some photos by Petty Officer 2nd Class Brannon Hood of the medevac.

Nancy French on Twitter, a passenger currently aboard the Disney Magic included a firsthand account of the medivac on her day 2 blog entry for the Transatlantic cruise.