A Spanish newspaper reported back in July… Ok, I know breaking news… Anyway, LavozDigital.es reported in July that the Navantia shipyard’s 2015 schedule will see the Disney Magic return for dry dock. Then in September 2016, the Disney Wonder will arrive for her major dry dock potentially along the lines of the Magic’s in 2013.

This brings some focus, albeit still speculative, on the whereabouts of the Disney Wonder following her 2016 EBPC that ends in Port Canaveral. It is hard to lock down the exact dates, but the Disney Wonder could turn right around on a Eastbound Transatlantic crossing in September. This would give crew and contractors a little over a week to prepare the ship for the big work in Cadiz. Then, return to Port Canaveral for a maybe preview sailing followed by reposition cruise to Galveston for her first sailing on November 10th.

Below is a translated version of the article. 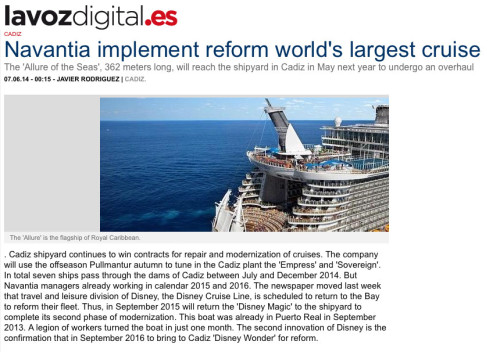 Hat tip to Lynda for tweeting the link.