Adventures by Disney is partnering with river cruise line, AmaWaterways for an all new adventure for Disney beginning in 2016. AmaWaterways’ partnership Disney will offer guests a family-focused river cruise on the Danube aboard a brand new vessel that is being custom built with a family focus.

The Adventures By Disney river cruises are 7-night itineraries sailing on Europe’s second longest river with stops in Budapest, Hungary and Vilshofen. Ken Potrock, the Disney executive in charge of the project told USA Today in an exclusive interview, that Disney Hopes their brand integration will bring families to the river cruising category which they feel is at very exciting development for the industry.

For 2016, there will be five river cruises aboard the AmaViola departing on four back to back weeks beginning July 7th and the fifth coinciding with Christmas. Fares will start at $4,179 per person based on double occupancy. The fare includes all meals, tips, wine with dinner and transportation between the ship and airport.

According to AmaWaterway’s website the ship, AmaViola is a new build that will debut in 2016. New family-friendly design elements being incorporated into AmaViola include specific room configurations, including six sets of connecting staterooms, as well as some rooms and suites that accommodate three- and four-person families, and other unique details that lend themselves to luxury family vacations. Shipboard spaces are being reimagined to provide for specially designed activities geared towards kids, teens and adults. The small size of the river cruising vessel allows for an intimate and deeply immersive cruising experience, ensuring guests’ needs are not only met but exceeded. 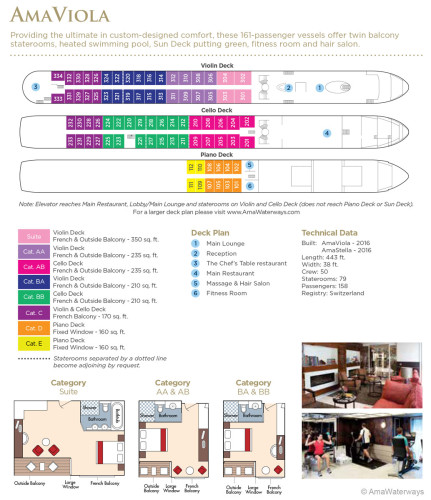 The following itineraries are from the Adventures By Disney website for this vacation adventure on the Danube River.

The seven-night Budapest to Vilshofen sailings will take passengers on a journey along the Danube through four European countries and see first-hand why this fabled river has inspired generations of artists, poets and musicians. Explore the vibrant streets of Budapest and Bratislava and the elegant avenues of Vienna, known to music lovers as the birthplace of the waltz. Cruise through the scenic Wachau Valley, home to picturesque vineyards, charming hamlets and a spectacular 900-year- old Baroque-style abbey. Conclude your adventure in Munich with an excursion to the 19th-century palace built by “Mad King Ludwig II” of Bavaria, the inspiration for Walt Disney’s Sleeping Beauty Castle.

The special holiday themed sailing in December will include visits to the renowned Christmas markets in Budapest and Vienna, a Vienna Boys Choir Christmas performance in the Hofburg Palace Chapel and a special holiday menu lunch.

The seven-night Vilshofen to Budapest sailings will take guest along the Danube river to charming red-roofed villages, steeply terraced vineyards, picturesque churches and the crumbling ruins of medieval castles. Guest will have the opportunity to see legendary capitals as Prague, Vienna and Budapest, as well as remarkably preserved towns and villages that appear untouched by the passage of time. Along the way, savor the world-renowned wines of Austria’s Wachau Valley, indulge in decadent local cuisine and tour a 900-year-old Benedictine abbey in Melk.

The sailings will feature a Disney touch with family focus options onboard and ashore including custom designed shore excursions and interactive Disney games onboard. The cruises are recommended for children ages eight, but children as young as four will be permitted to sail.

Shipboard activities will offer something for everyone. Adults can enjoy wine tasting, music, dancing and an onboard fitness center, along with some of the finest cuisine and service available. Special Adventures by Disney activities for Junior Adventurers include activity nights, movies, karaoke, relay games, life-size chess lessons, video games and more. Teens will also find activities and themed nights created specifically for them.

Adventures by Disney will have eight of their own guess on board each sailing to lead the family-focused activities.

Potrock seem to imply that Disney was already looking to expand not only the number of sailings, but also worldwide locations. Who knows where this partnership may lead, remember Disney Cruise Line was born out with a partnership with Premier Cruise Line sailing the Big Red Boat in the mid-1980’s through early 90’s.

For more on the Adventures by Disney / AmaWaterways river cruise partnership I encourage you to check out the exclusive USA Today article by Gene Sloan.