Overnight, the tropical storm strengthened into Hurricane Odile. They system continues to move move northwest along the Mexican coastline. The Disney Wonder is sailing on an altered 14-night Eastbound Panama Canal Cruise skipping Cabo San Lucas and Puerto Vallarta in order to sail west of the storm in order to arrive for her scheduled transit through the Panama Canal next weekend.

As you can see below, the Disney Wonder is on course to avoid Hurricane Odile pending the current forecast track holds true. 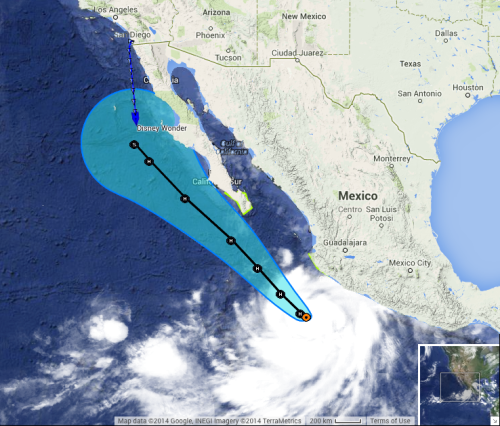 For those looking to keep an eye on Tropical Storm Edouard in the Atlantic, you can find updated information over in the Tropical Weather Center.

Hurricane Odile remains approximately 200 miles south-southwest of Manzanillo, Mexico and is now producing maximum sustained winds of 80 mph. Hurricane force winds are reaching out 25 miles with tropical storm force wind field has been reduced to 195 miles from the center of circulation. Estimated minimum central pressure has dropped again, this time to 980 mb.

A tropical storm watch is in effect for Manzanillo to Cabo Corrientes and La Paz to Santa Fe.

This table contains the NHC’s statistics for the tropical cyclone from each advisory.