The Walt Disney Company reported their earnings today for the fourth quarter (Q4) as well as fiscal year 2013 which ended on September 28, 2013.  Overall, the Walt Disney Company’s revenue for the year increased by 7% to $45 billion with income up 8% to a record $6.1 billion.

The Parks and Resorts segment (which includes Disney Cruise Line) saw revenue jump for the quarter 8% to $3.7 billion and 9% for the fiscal year to $14 billion.  Income for the quarter jumped 15% to $571 million with a higher, 17% jump to $2.2 billion for the year.

“We’re extremely pleased with our results for Fiscal 2013, delivering record revenue, net income and earnings per share for the third year in a row,” said Robert A. Iger, Chairman and CEO, The Walt Disney Company. “It was another great year for the Company, both creatively and financially, and we remain confident that we are well positioned to continue our strong performance and drive long-term shareholder value.”

Growth in the Parks and Resorts segments for the quarter has been attributed to an increase in Disney Vacation Club sales linked to the latest addition of the Villas at Disney’s Grand Floridian Resort & Spa.  Additionally, there was a increase in royalty revenue from Tokyo Disney Resort.  Disneyland Paris partially offset the fourth quarters earnings with a decrease in attendance and occupied rooms. It sounds like it would have been worse for Disneyland Paris if not for increased guest spending while vacationing at the resort. Domestically, increased guest spending was offset by the the cost of the ongoing MyMagic+ rollout, labor, and other cost inflation.

The Parks and Resorts growth for the year follows along with the quarter with increased at the domestic parks and resorts in combination with Disney Vacation Club and Hong Kong Disneyland Resort.  Annual growth was offset by a decrease at Disneyland Paris and a higher startup costs at Shanghai Disney Resort.

During the earnings call, Bob Iger mentioned two big announcements from earlier today; the reveal of Star Wars Episode VII release date of December 18, 2015 and a unique deal between Marvel and Netflix to multiple live action series. In maybe a slip, Iger revealed that ABC Television is currently developing a new Marvel concept.

The lone mention in the earnings report for Disney Cruise Line dealt with a decrease in capital expenditures within Parks & Resorts for FY 2014 as the Disney Fantasy’s final progress payment was on the books in FY 2013. The re-imagination of the Disney Magic was not referenced in either the earnings report, nor the conference call. I fully expected to hear or read something with respect to the expenditures related to the overhaul, as well as loss in cruise fairs directly related to the Disney Magic’s extended dry dock that began during the last month of Disney’s 4th quarter and fiscal year. Maybe the Disney Magic dry dock cost was bundled in the the mention of increased labor cost for the quarter.

During the conference call Iger was asked about the possibility of building a fifth Disney Cruise ship based upon the current popularity with many guest booking over a year in advance. Iger was quick to reply with a solid no we are not considering building another cruise ship. Iger stated that Disney Cruise Line’s current focus is expanded itineraries of which there have been talks. Interestingly enough, Iger mentioned Asia as a future market for Disney Cruise Line and a reason for the company to potentially build another ship.  However, it is unknown when Asia will open up as a viable “family cruise” market therefore look for expanded itineraries among the current fleet.

Audio clip featuring Bob Iger’s response to the question of will there be a 5th Disney Cruise ship built. 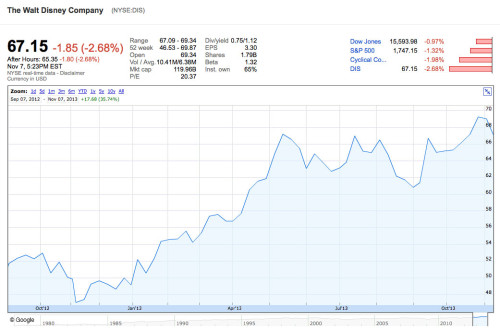