This past Saturday, while many guests were heading home following a relaxing 7-night cruise on the Disney Fantasy, a group of Cast & Crew Members set a course to local Cocoa, Florida to join their fellow shoreside co-workers in a VoluntEar activity. The cast and crew joined up with KABOOM! and the Boys & Girls Clubs of Central Florida to build a playground. In just about eight hours the new playground was fully assembled and ready for area children to enjoy!  Planning for the playground began in August when community leaders met with representatives from Disney and the Boys & Girls Clubs to design their dream playground. Children provided drawings of their dream playground which were used as inspiration for the final build. The new playground is located just over ten miles from the Disney Cruise terminal at Port Canaveral on Dixon Blvd adjacent to a new BGCCF location which is scheduled to open in December. 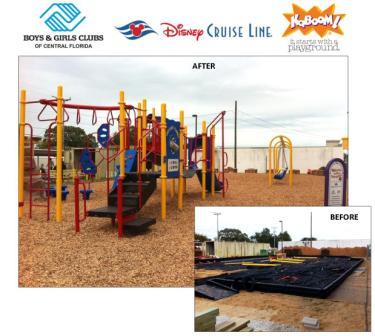 Anthony Connelly, SVP of Operations at Disney Cruise Line commented, “Building this playground in Brevard County, near our homeport in Port Canaveral, is especially meaningful to us, and helps contribute towards our goal of striving to make a positive impact in the lives of our neighbors in all of our homeports and destinations around the world.”

Last summer, more than 150 Disney Cruise Line VoluntEARS, including Crew Members from the Disney Fantasy, teamed up to transform an empty lot in Rockledge, Florida into a children’s play area with slides, climbing walls and zip lines.

The Disney VoluntEARS program is a charitable organization made up of Disney cast members who donate their time to help give back to the communities in which they live and work.