The Disney Wonder arrived in Falmouth earlier today marking not only her first-call at the Port of Jamaica, but also the first for Disney Cruise Line. Today’s call in Falmouth will be the first of many scheduled arrivals for Disney Cruise Line’s ships on select Western Caribbean itineraries through the end of 2014, and potentially beyond. In an article on Go-Jamaica.com, the mayor of Falmouth, Councillor Garth Wilkinson mentions that he is happy to have Disney coming to town, and hopes that a deal can be sealed to see the vessel returning for at least a few years.

Another article from the Jamaica Observer indicates that local officials see Disney’s willingness to call on Falmouth as a seal of approval as a family destination.  William Tatham, VP of Cruise & Marine Operations for the Port Authority of Jamaica hopes that Disney’s presence will help sell Jamaica as a family destination.  Following almost 10 years of unsuccessful attempts to get Disney to sail to Jamaica, local officials invited executives Disney Cruise Line to the newly built cruise pier last May.  Following a review of the area and the availability of tours Disney decided that Falmouth may very well have something to offer their passengers.

Tatham joined Member of Parlament, Patrick Atkinson aboard the Disney Wonder for a customary plaque exchange ceremony.  Atkinson acknowledged that there is still some work to do to clean up the town and curb the harassment outside the gated pier in order to make arriving tourist feel more welcomed to Jamaica. 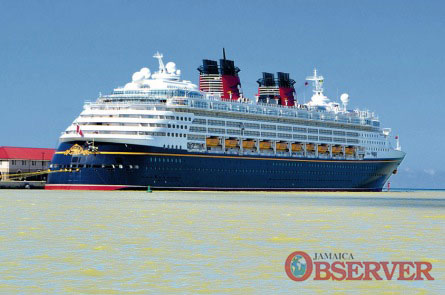 The Disney Wonder will sail to Falmouth four more times this year while home porting in Galveston, Texas.

Although the Disney Magic will be sailing exclusively Western Caribbean cruises in late 2014 from Port Canaveral, she will only be stopping in Jamaica every other Thursday.