Yesterday, Disney Cruise Line president, Karl Holz was presented with the biennial Cruise Award from the American Association of Port Authorities. AAPA’S Cruise Award is presented to a individuals whose outstanding work or service has had a positive impact on the relationship between the cruise port and the cruise industry in the Western Hemisphere.

Holz was selected for this award for his distinguished leadership at Disney which includes his handling of the 2004 storm crisis in Florida that closed Port Canaveral for two weeks along with his efforts in expanding the Disney Cruise Line’s brand by more than doubling the fleet with the addition of the Disney Dream and Disney Fantasy, and adding additional regional home ports in the U.S. beyond Port Canaveral.

Captain Mickey was on hand as Holz accepted the 2013 Cruise Award during the AAPA’s 102nd Annual Convention held at JW Marriott Grande Lakes in Orlando, Fl on October 15, 2013. 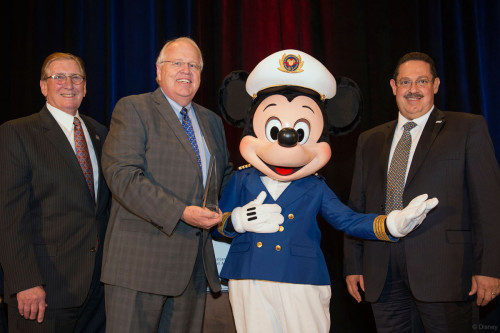 Pictured (L-R) Gary LaGrange, President and CEO of the Port of New Orleans – Karl Holz and Captain Mickey – Armando Duarte-Peláez, chairman of the board for AAPA.

Holz joins a short list of people who have received AAPA’s Cruise Award, which is awarded every other year.

For those of you who enjoy a little speculation, look again at the photo and make note of  who joined Holz while accepting the 2013 Cruise Award. This photo op, and tweet only add to the speculation that Disney Cruise Line may make the Port of New Orleans their next regional home port.  Additionally, the was an interview with the Director of Cruise and Tourism at the Port of New Orleans, Robert Jumonville by WWL.com that reaffirmed the port’s desire for Disney to sail from the new Poland Avenue terminal once it is completed in the fourth quarter of 2015.  WWL’s article contains the following quote from Jummonville.

“We’re working with a lot of cruise lines. We’re building a third cruise terminal at Poland Avenue that should be online some time in the third or fourth quarter of 2015. And, we’re actively marketing it to various cruise lines, one of which is Disney. We’ll market it to every viable cruise line out there. I would say we’re probably in active conversations with four or five of them.”

There is no denying the fact that the Port of New Orleans is courting Disney Cruise Line.  Only time will tell if the port’s efforts will pay off which could be as early as the fall of 2015.