We returned to PortMiami earlier this morning aboard the reimagined Disney Magic’s marking the end of her first sailing following her extended transformation that started in Cadiz , Spain and “finished” just days ago in Port Canaveral. Before we get any further along, I want to preface this by saying this will not be a full and in-depth review of the Disney Magic. It is impossible to soak it all in during a 2-night cruise to nowhere; instead this will be a quick overview of our experiences over the last few days as full-fare paying guests. The reimagined Disney Magic provided us with a mix of good, some bad, and some ugly.

The Oceaneer Club and Oceaneer Lab are top-notch, and our daughter had an excellent time. She especially loved the Slinky Dog slide in Andy’s Room and the new Oceaneer Bands AKA Disney Cruise Line embossed MagicBands, which are exceedingly better than the old-style DCL Mickey Bands. Not only are the Oceaneer Bands more comfortable, they are cheaper with a $12.99 price tag if you choose to keep it as a souvenir versus the $50 fee if you lose or forgot to return the Mickey Band. 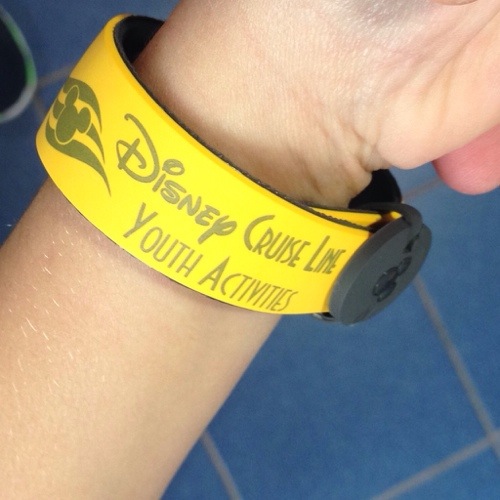 The kids spaces were perfect! The Edge and Vibe have not been changed. I will note, that our daughter has been on all 4 ships and says that the kids clubs on the Disney Magic are her favorite.

The upper deck additions are great; the AquaDunk is a thrill, especially when your ride it at night. At night, it gives you the feeling of falling into a black hole until you reach the translucent loop that extends over the edge of the ship. It is thrilling, but not nearly as extreme as body slides like Summit Plummet at Blizzard Beach. So far, the Twist N Spout slide is open for anyone over the minimum height of 38”. Our daughter is 6 1/2 and loves it – says it’s a major improvement over the Mickey Slide (yes, she uses good vocabulary). We also like the addition of the covered shady areas on deck 10. 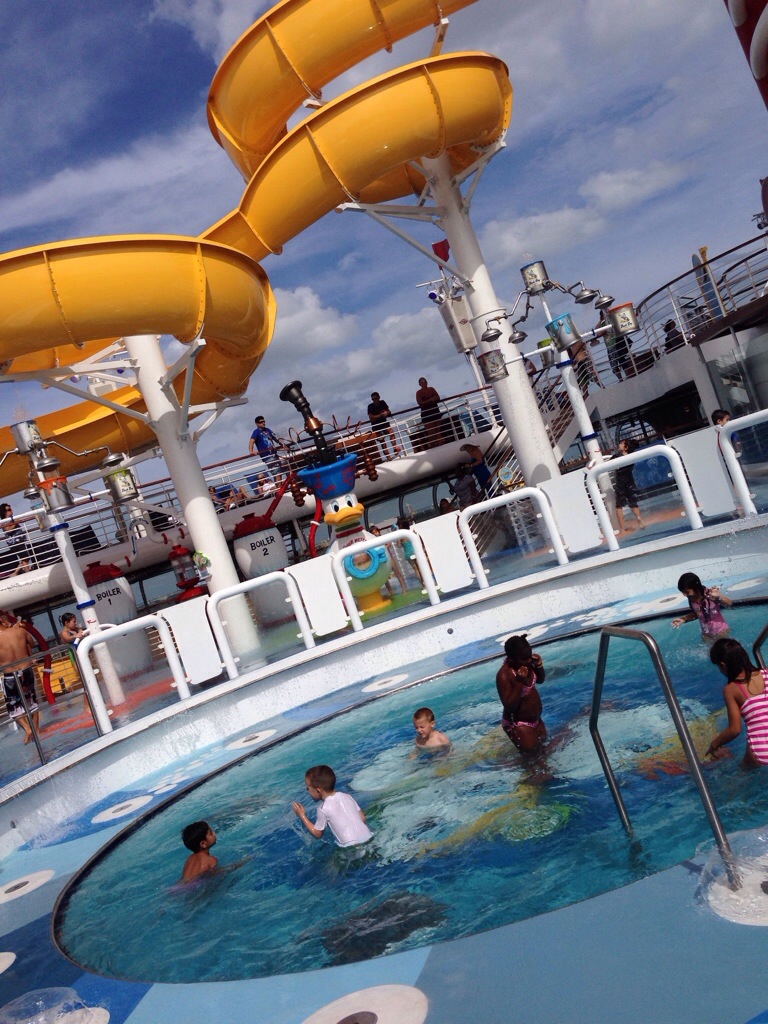 The shops are organized very nicely; the overhaul makes the area more open and, well, ‘shoppable.’ The D Lounge also came out great – a nice upgrade from Studio Sea. The atrium is in excellent condition.

The all new Carioca’s menu was refreshing with many unique choices, including the beef empanada appetizer that instantly reminded me of the one served during Epoct’s International Food & Wine Festival. The reimagined Animator’s Palate show looks amazing and is still capped off with an appearance the mouse in charge, Sorcerer Mickey. Cabanas also came out great.

In Miami, you enter thru Deck 4 instead of Deck 3. The first thing you notice is that the walls on Deck 4 need a coat of paint, and the rust is prevalent, and it seems dirty; that ‘wow’ factor is missing as you enter and see the elevators and stairwell. Entering via deck 4 is a result of the configuration of PortMiami, not a choice by Disney. The Promenade Lounge went untouched as well, as the faded booths actually have visible rips in them, among many other things that shows the age of it. I planned on spending some money on some new Disney Magic Reimagined merchandise, but there is none to be found. There are some new Disney Magic logo merchandise, but nothing specific or unique for the relaunch. 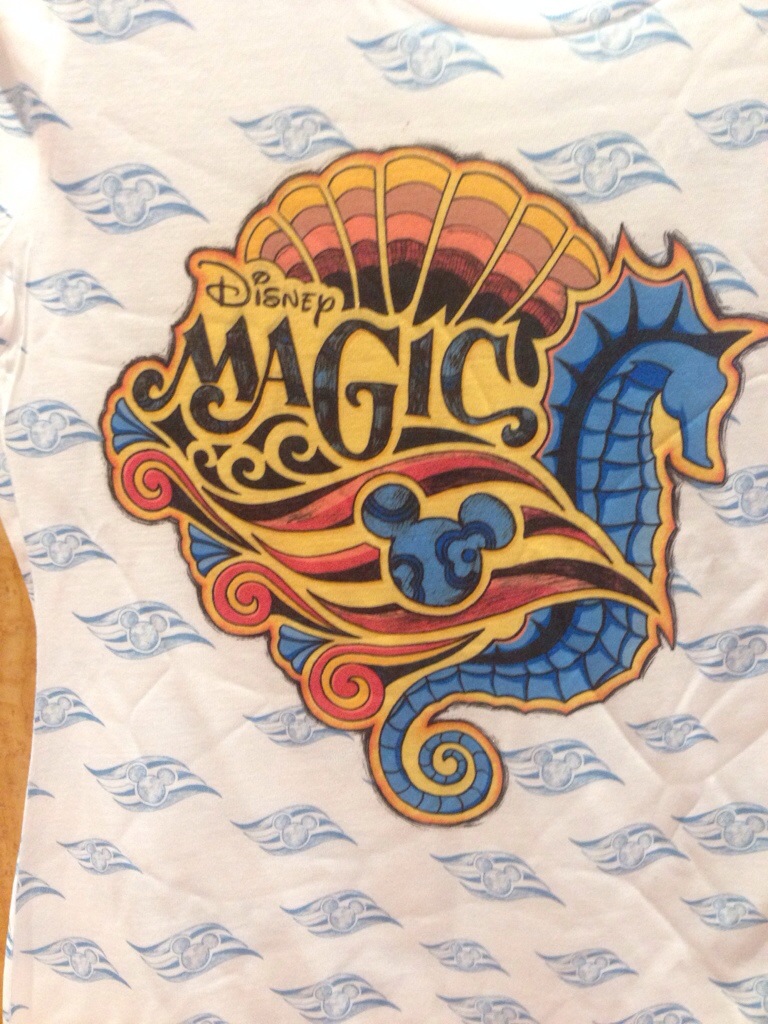 We inquired about the lack of relaunch merchandise and were told that it hasn’t made it in and would be 1-2 more weeks; interesting since the first cruise was supposed to be 10/20…. There have been a some issues where it appears the left hand is not communicating with the right hand, or even communicating at all. There have been issues with the Personal Navigators listing inaccurate information on where to go for dining changes, listing tastings that aren’t offered or erroneous spelling errors. It was paltry cloudy on embarkation day. I guess I never learned about that one in any of my college atmospheric science classes. Things like this go against that attention to detail that they tout as the “Disney Difference,” but are not major issues like what you are about to read about.

All over the ship, there are sings of sloppy or rushed craftsmanship. The attention to detail that we have come to expect from Disney is absent from the reimagined Disney Magic as we sit here today at PortMiami. Ugly does not begin to describe the condition of our stateroom. Unacceptable is a more appropriate word. For starters, there was a layer of construction dust covering every surface of the stateroom as well as the inside of our closet, which my suit jacket was kind enough to collect. When you sell a reimagined ship, one would expect a perfect stateroom. This was far from the case, instead of gutting the staterooms, instead, the carpet, beds, sleeper sofas, coffee tables, and vanity stools were replaced. The rest of the stateroom including bathrooms were untouched aside from some filing of any missing grout in the tile work. The walls are dirty. The beverage cooler (which sadly did not get changed to a fridge) was barely cool. The handles were missing from our new nightstand drawers. This is just the tip of the iceberg. We stepped onto our Navigators Verandah to discover rust, paint ships, & cigarette soot above the location of the old ash tray, as well as a missing railing in the open porthole. The wood work and bench had rotting wood that I stuck my finger through. Quite frankly, the verandah was untouched in Cadiz. The paint was never stripped down to bare steel. 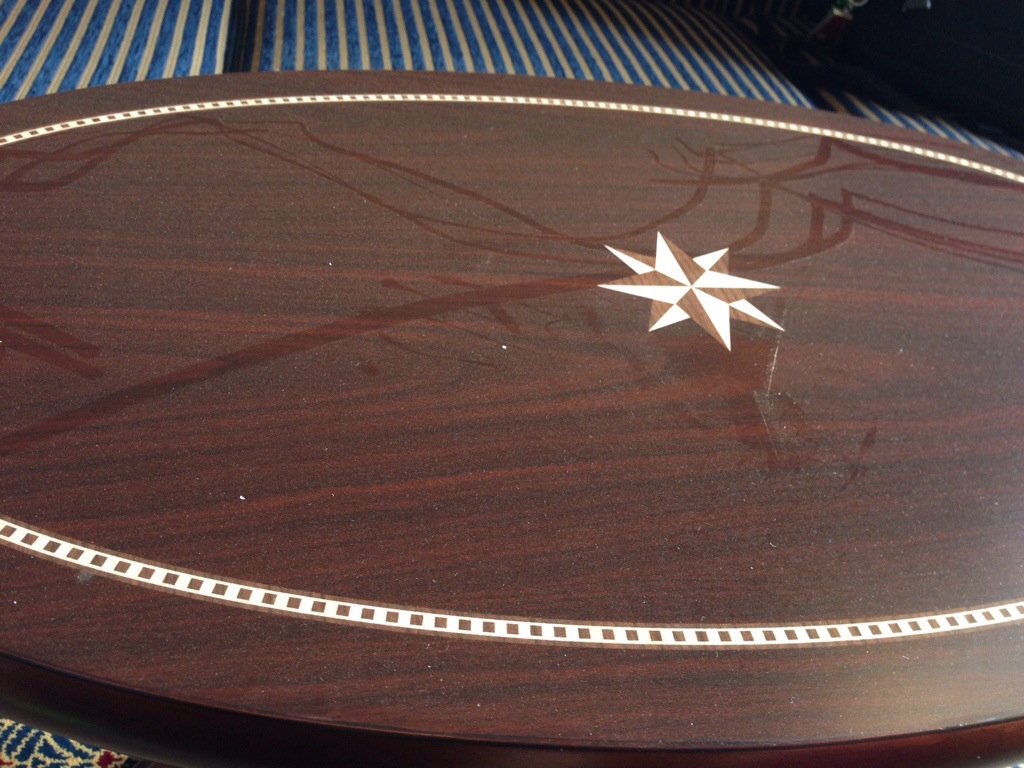 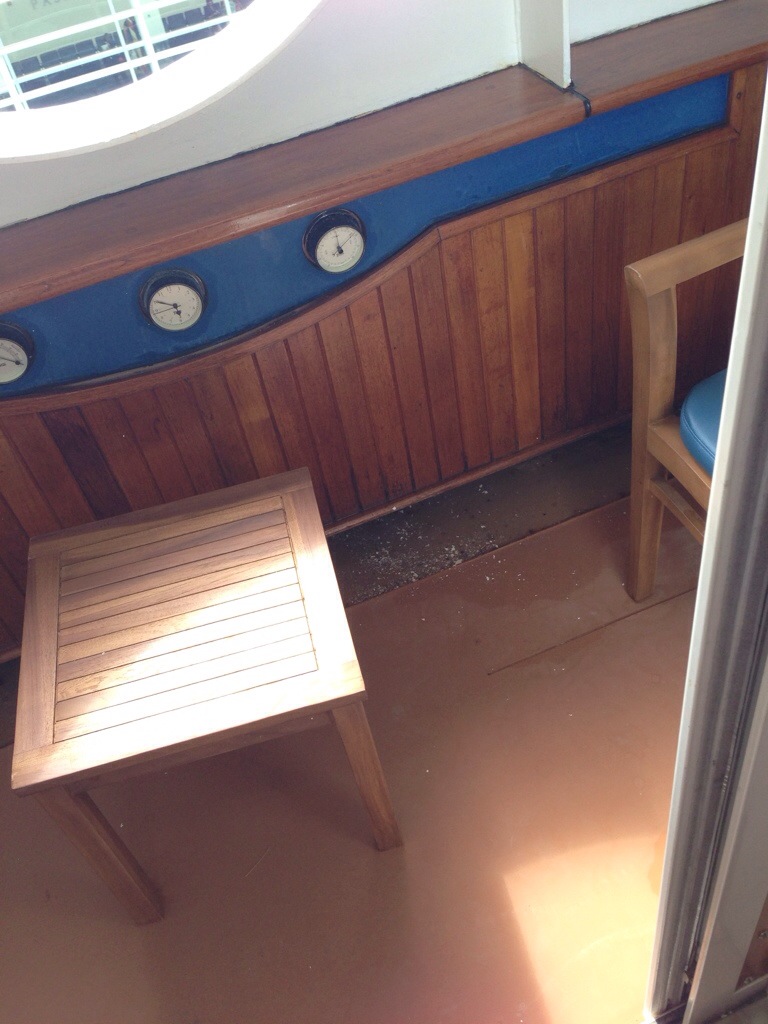 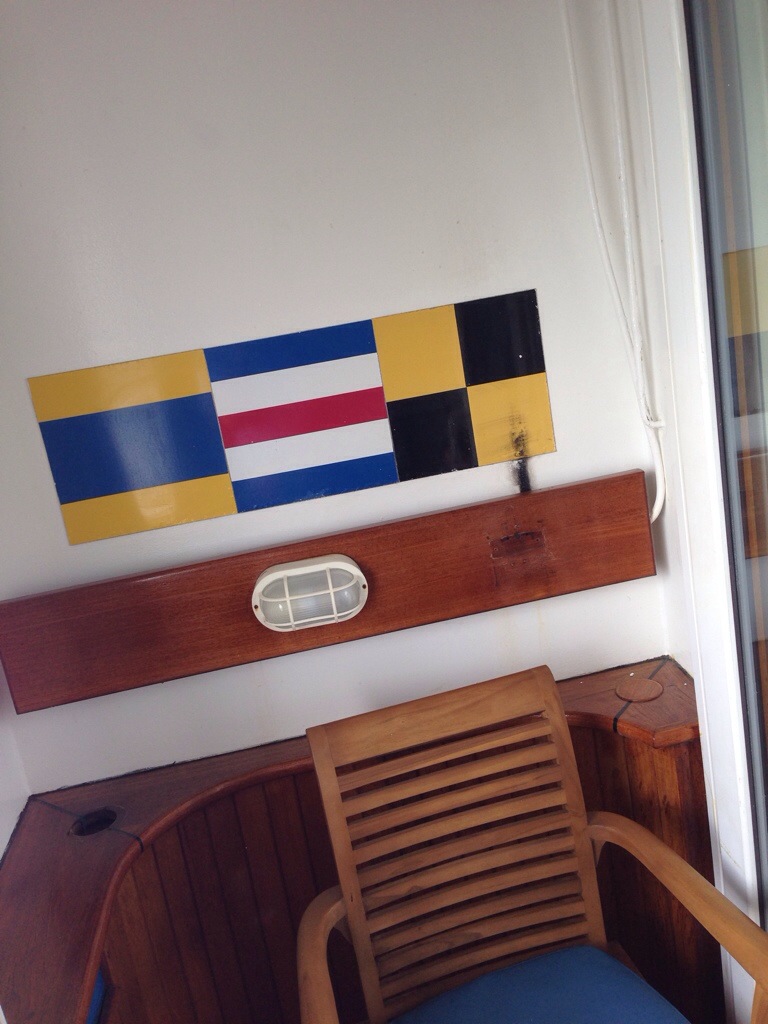 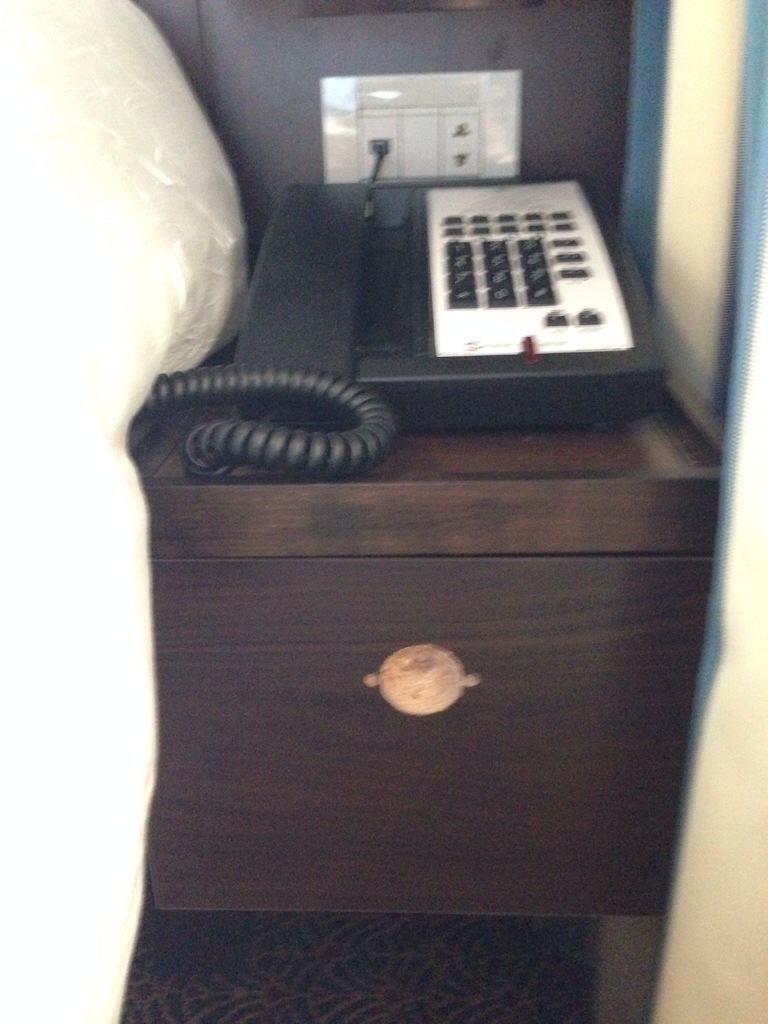 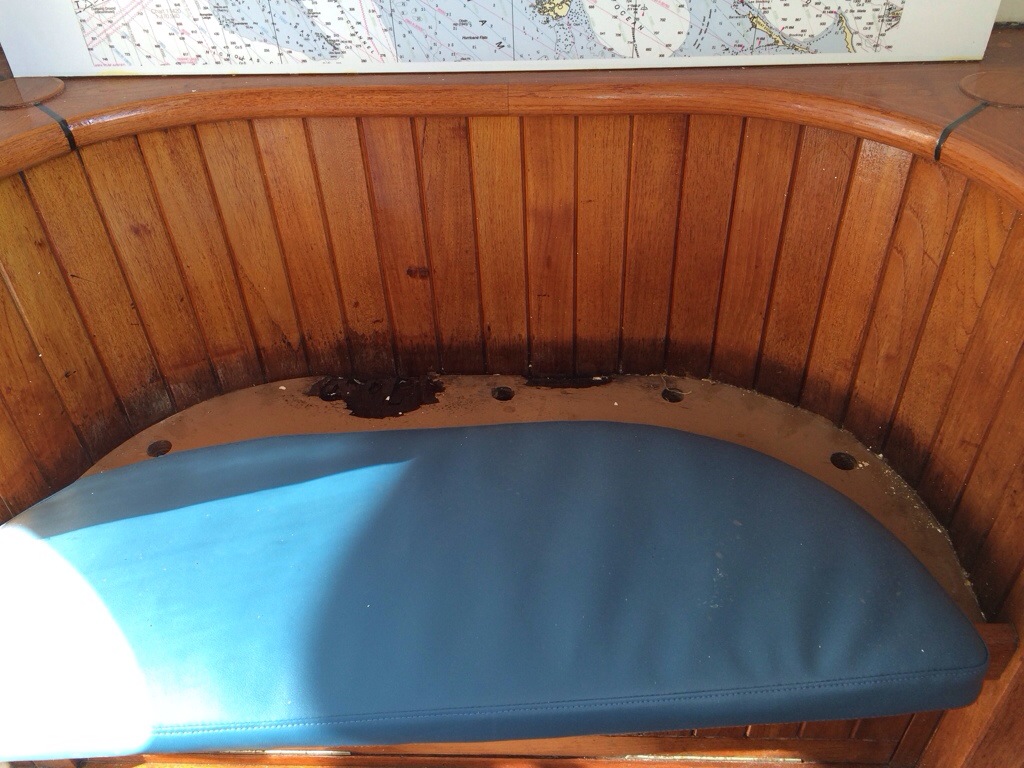 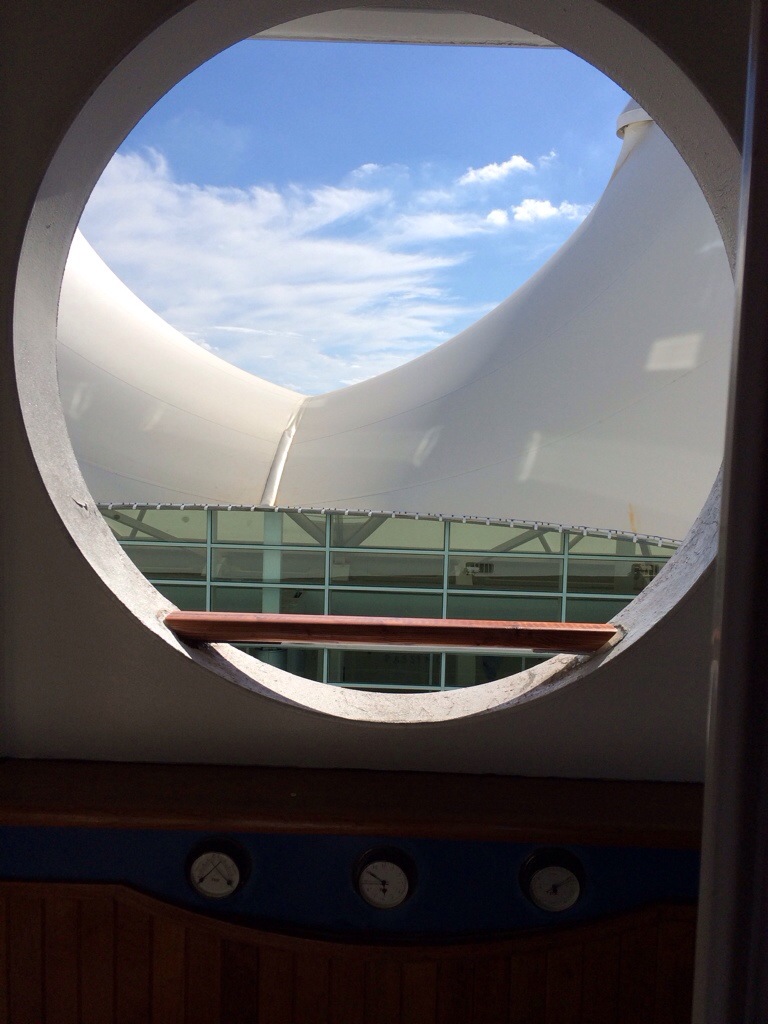 Now, this may be piling on with regard to the staterooms as it is not a personal experience, but after many discussions with our fellow cruises, we had it pretty good considering some guests did not have working toilets, showers, hot water, air conditioning, electricity or any combination of those. We heard someone who was missing a ceiling panel and wiring was exposed in their stateroom. I met a family who was about to walk away from today’s 5-night sailing because they had been relocated into 3 different staterooms during the 2-night sailing. For now, if your stateroom has running water, hot water in the shower, and working toilets, you are doing good.

I challenge any officer, or executive to assign a stateroom in any of the above conditions listed above to one of their family members. There is no way you are can tell me with you are proud of this product. It is glaringly obvious that the ship is not “show ready” and should have been offline for at least another month to get things done to the Disney standard we as consumers have come to expect. Keep in mind Disney had invited media and travel agents on this sailing. I cannot wait to see some of those reviews. I challenge those to write an honest review to the reimagined Disney Magic.

While I said there was some good, some bad, and some ugly, there is one thing that cannot go unmentioned. The crew has been amazing and extremely happy to be back to work doing what they love; brining the ship to life with the Disney difference. They truly do make the ship. If it were not for the crew, all the aforementioned issues would have made this experience even less than what we have come to expect from Disney Cruise Line.

It pains me to write this, as all of you know that myself, my wife & daughter love and adore Disney Cruise Line. We are not nitpicky, nor do we try to get something for free. With every single con we desperately tried to think of pros. We decided that the main issue was actually the way the ship was advertised. It was advertised as ‘new,’ and it was anything but. We were wooed with “re-imagined” staterooms, and that was not the case. Instead, they should’ve just said the ship was going to dry dock to get some much-needed upgrades to public spaces, because that was the end result. It certainly would’ve helped manage expectations.

We are not done exploring the reimagined Disney Magic, as we are embarking on today’s 5-night Western Caribbean cruise with stops in Cozumel, Mexico and Castaway Cay. We are not writing this to sour anyone away from booking a Disney Cruise or trying to get them to switch, as we have quite a few booked as well in the future with no plans on canceling any, including the ones on the Disney Magic. This is just an honest review of our recent experience.

Please take the time to read our follow up article following the 5-night sailing.

81 Replies to “First Impressions of the Reimagined Disney Magic”