Earlier today, the National Oceanic and Atmospheric Administration (NOAA) published an updated outlook for the 2013 Atlantic hurricane season.  If you recall, NOAA published their initial outlook back in May just prior to the start of hurricane season.  Today’s update is not all that different from the initial outlook as the season remains on track to be above-normal with the potential to be exceed expectations.

NOAA’s lead hurricane forecaster, Gerry Bell Ph.D. says favorable atmospheric and oceanic conditions for storm development have materialized.  Additionally, two of the four storms that have develop so far this season have formed in the deep tropical Atlantic, which historically is an indicator of an active season.

Current conditions are similar to those of other active hurricane seasons over the last 18 years.  Sea-surface temperatures are above average in the Atlantic and West Africa is experiencing a stronger raining season.  Weather systems moving offshore from Africa generate the unique wind patterns that eventually develop into tropical cyclones.

NOAA’s updated 2013 Hurricane Season outlook still calls for a 70% chance of an above-normal season with 13 to 19 named storms with 6 to 9 of those becoming hurricanes with 3 to 5 major hurricanes (category 3 or higher).  This update includes the four storms to date.  The revised outlook is very similar to what was published in May, but with a slight reduction in the total number of hurricanes.  Even with the slight lowering of expected hurricanes, the low end estimate still remains above the long term average.  NOAA’s revised numbers have been added to the graph below and highlighted with the red boxes. 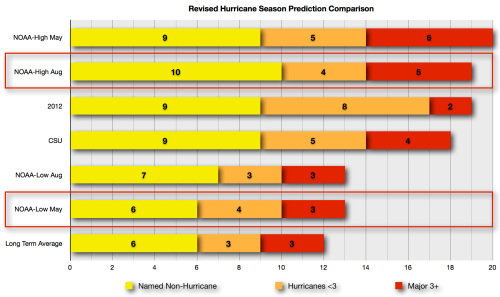 NOAA revised their outlook based on the decreased likelihood that La Niña will develop which would bring a reduced wind sheer that would help fuel tropical development and the lack of hurricanes through July.

So far this year we have had four named storms; Andrea, Barry, Chantal, and Dorian.  Dorian, if you recall developed far out in the Atlantic and would not go away resulting in an itinerary shakeup for the Disney Fantasy.  We are just now approaching the beginning of peak hurricane seasons which is typically mid-August through October.