This week, the National Oceanic and Atmospheric Administration (NOAA) published their outlook for the 2013 Atlantic hurricane season which begins on June 1.  NOAA’s outlook that this season would be an above average hurricane season came as no surprise after reading Colorado State University’s (CSU) predictions last month.

According to NOAA’s  Climate Prediction Center, there is a 70% chance of 13 to 20 named storms with 7 to 11 of those becoming hurricanes with 3 to 6 major hurricanes (category 3 or higher).

NOAA’s conservative estimates are slightly above the long term average.   However, I would say this is not to be expected as the CSU and NOAA high estimates well exceed the long range average of 12 named storms, 6 hurricanes, and 3 major.    When comparing the estimates from NOAA and CSU with last year’s actual numbers, the outlook seems to be well within reason. 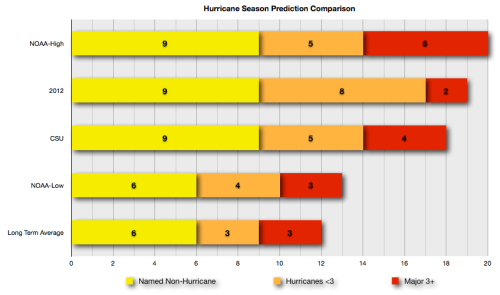 NOAA points to three key climate factors that will come together to produce an active or extremely active 2013 hurricane season. These are:

In April, the National Weather Service (NWS) announced some policy changes to allow for hurricane warnings to remain in effect, or to be newly issued, for storms like Sandy that have become post-tropical. This added flexibility will allow forecasters to provide a continuous flow of forecast and warning information for evolving or continuing threats.