Tropical Storm Sandy continues to strengthen and is now producing maximum sustained winds of 70 mph moving north at 14 mph. Additional tropical storm watches have been for the south east coast of Florida.

Yesterday’s tropical update sparked a lively discussion. So, I thought I’d put a link to the Disney Cruise Contract.

I sympathize with those of you traveling; however this is the risk you take when cruising during hurricane season. While Disney can control many things, they as well as other cruise lines are unable to control Mother Nature.

TS Sandy is still moving at 14 mph with maximum sustained winds of 70 mph. She will be making landfall in Jamaica this afternoon into the early evening. Sandy will continue moving towards Eastern Cuba on overnight and emerge in the Central Bahamas on Thursday.

Additional strengthening is expected and more than likely Sandy will arrive in Jamaica and Cuba as a category 1 hurricane.

The mountainous region of Eastern Cuba will help weaken the system to a storm tropical storm. As a result the Government of the Bahamas has changed the tropical storm watch for the Northwestern Bahamas to a tropical storm warning. This area under the warning includes Castaway Cay and Nassau. 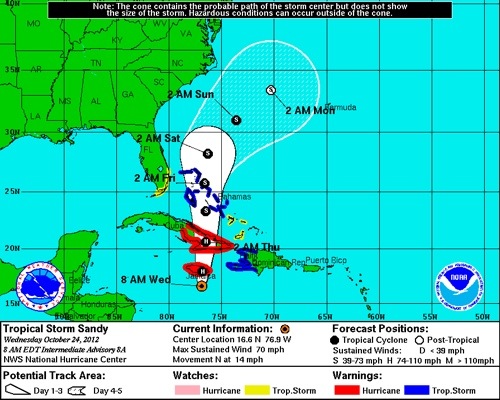 The forecast models are in agreement for the next few days. 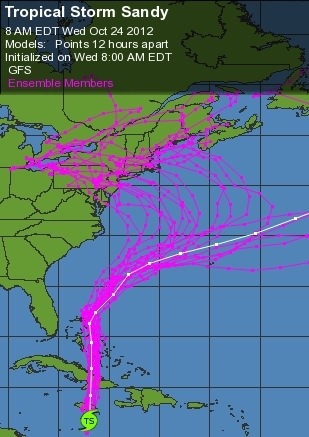 Sandy has continued to gain strength this morning and is now a Category 1 Hurricane moving north-northeast at 14 mph with maximum sustained winds of 80 mph.

A the previous tropical storm warning for the Northern Bahamas, including Nassau and Castaway Cay, has bee upgraded to a hurricane watch. The tropical storm watch along Florida’s east coast has been extended north of Port Canaveral. 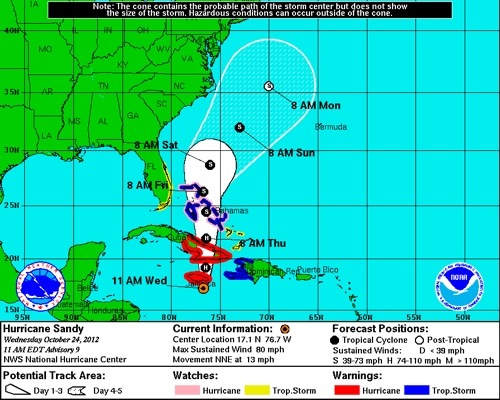 Sandy is just 30 miles off the southeastern coast of Jamaica moving north at 14 mph with maximum sustained winds of 80 mph.

The probability of tropical storm force winds around Nassau and Castaway Cay have increase to around 60%.

Hurricane Sandy has reach Jamaica with 80 mph winds moving across the island at 14 mph. 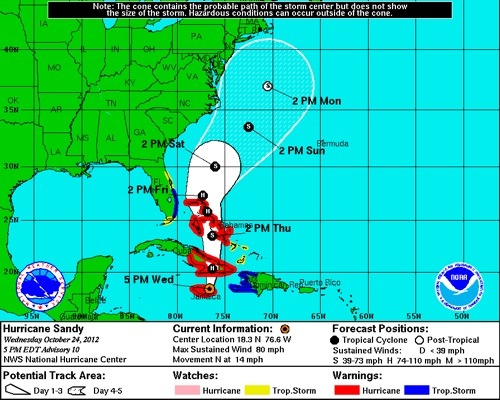 Hurricane Sandy is now between Jamaica and Cuba moving at 14 mph with 85 mph winds. Sandy will most likely continue to strengthen as she makes her way to Cuba the weaken over land. Once she is back over open water she will restrengthen as she moves through the Northern Bahamas as a hurricane.

Sandy has strengthened over the last few hours as she is approaching southeast Cuba at 13 mph with maximum sustained winds of 90 mph. Sandy may become a category 2 hurricane with winds exceeding 96 mph by the time she makes landfall in Cuba. It also appears at this hour that Sandy will remain a hurricane as emerges from Cuba into the Bahamas. 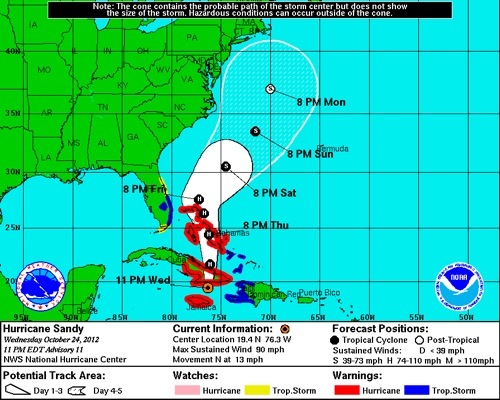 According to CruiseCritic.com other cruise lines have already altered their scheduled Bahamian calls over the next few days; including Carnival Pride, Carnival Glory, Norwegian Jewel, and the Norwegian Sky. The Carnival Glory will be skipping Freeport on Friday for Port Canaveral.

Disney Cruise Line has posted an itinerary change for the October 25th Dream sailing. The Dream will no longer visit Castaway Cay, and the day at Nassau has been moved to Friday (weather permitting). It does not look promising for the [Disney_Fantasy] at Castaway Cay on Friday.