Sandy has weakened to a category 1 hurricane with 90 mph maximum sustained winds. The center is 185 east-southeast of Freeport moving north-northwest at 13 mph. 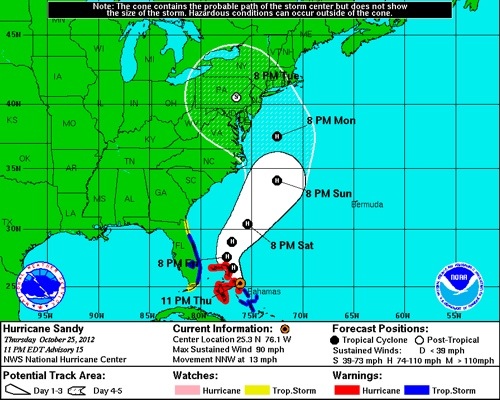 The hurricane warning for the Central Bahamas has been downgraded to a tropical storm warning. All warnings for the Southern Bahamas have been discontinued.

The center of Hurricane Sandy is 105 miles east of Nassau between Cat Island and Eleuthera Island in the Bahamas moving north-northwest at 17 mph. The winds have drop to 100 mph. Sandy looks to make a turn to the northwest overnight and into Friday as her forward movement will continue to slow down.

Sandy is expected to continue to grow in size during the next few days. Cat Islands reported sustained winds of 60 mph as Sandy is approaching.

Sandy’s forecast track has been slowly drifting east into the Atlantic away from any direct impacts in the Northern Bahamas. While the path moves further away from Nassau and Castaway Cay, the shear size of Sandy will still bring the islands strong winds and heavy rain over the next few days.

Check out this animation showing the potential wave height along the East Coast.

Hurricane Sandy has picked up some speed this afternoon and is now moving north into the Bahamas at 20 mph. Sandy’s winds remain at 105 mph.

The promising news this hour is the system appears to be tracking slightly to the east of the Bahamas. 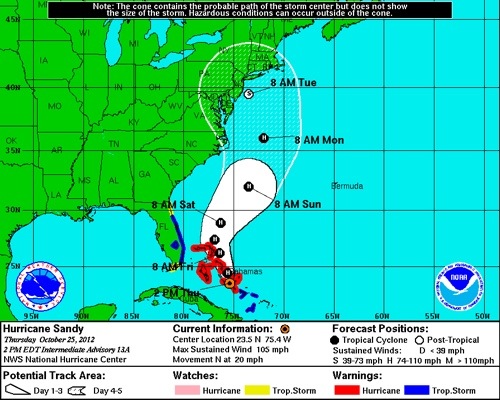 Hurricane Sandy is approaching the Central Bahamas and remains a category 2 hurricane with maximum sustained winds of 105 mph. Sandy is traveling north at 16 mph, but is expected to slow down and turn to the north-northwest this evening. Hurricane force winds are extending outward up to 30 miles with tropical storm force winds extending out to 140 miles.

The watches and warnings have been discontinued for Cuba, as well as the tropical storm warning for Haiti.

Overnight Hurricane Sandy underwent rapid intensification as the maximum sustained winds increased from 90 mph at 11 PM to 110 mph early in the morning as she moved towards Cuba.

Category 2, Hurricane Sandy is about to move off the northeaster coast of Cuba at 18 mph with maximum sustained winds of 105 mph. Sandy’s forward speed is expected to slow over the next 48 hours as she moves towards the Central Bahamas tonight. Hurricane force winds are extending 25 miles from the eye with tropical storm force winds reaching outwards up to 140 mile.

Central and Northwestern Bahamas can expect a storm surge of 5 to 8 feet above normal tide level.

A tropical storm warning has been issued for the majority of Florida’s east coast including Port Canaveral, where the [Disney_Dream] is currently located before sailing on a revised 3-Night Halloween cruise this evening.