Wärtsilä Hamworthy inked a deal with Meyer Werft to provide hybrid exhaust scrubbers for installation in two new Royal Caribbean Sunshine class ships.  The first is currently under construction in Meyer Werft’s Papenburg, Germany shipyard and scheduled for delivery in the fall of 2014 and the spring of 2015.  The hybrid scrubbers will enable vessels to travel anywhere in the world, as the scrubbers will ensure compliance for the 2015 Emission Control Area (ECA) 0.1% sulfur limit, as well as the worldwide 0.5% limit from 2020 and the impending North American ECA, by removing sulfur emissions and harmful particulates from the vessel’s exhaust. 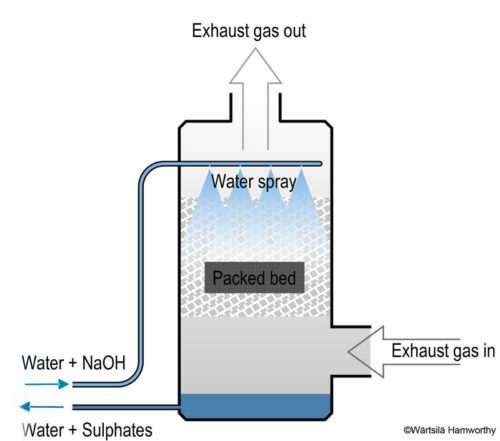 The solution chosen by Meyer Werft and Royal Caribbean not only ensures universal compliance with sulfur limits, allowing maximum choice over voyage routes and destinations; it also allows significant flexibility in the operation of the scrubber itself. This hybrid approach allows switching between open-loop and closed-loop scrubbing. This means that at sea, scrubbing using only sea water can be enabled but while maneuvering or in port the system can be closed, re-circulating the water already within the scrubber.

Disney Cruise Line has an option in the [Disney_Dream] and [Disney_Fantasy] contract for Meyer Werft to build 2 additional ships, if desired.  This could mean that any new Disney Cruise Line ships could include this hybrid exhaust technology from Wärtsilä Hamworthy.  Wärtsilä provides retrofit scrubbers for installation into existing ships.  Could a scrubber be on the list of upgrades scheduled for the Magic’s Dry dock in 2013?