Port Canaveral commissioner approved port staff to enter contract negotiations with BEA and Jacobs for Disney Cruise Line terminal renovations. The approval came after the landslide agenda item was briefly pulled for further discussion. The port now has the go-ahead to negotiate a contract with BEA and Jacobs. A finalized contract will be up for approval in a future port meeting.

The renovation projects are estimated to run just under $47 million. Disney Cruise Line intends to use CT10 for times when they will have 2 ships in port. In the short term, the port expects Disney Cruise Line to base 3 ships at Port Canaveral adding additional itineraries to the 3/4-night Bahamian and 7-night Easter/Western Caribbean offerings such as a 5/5/4-night rotation. 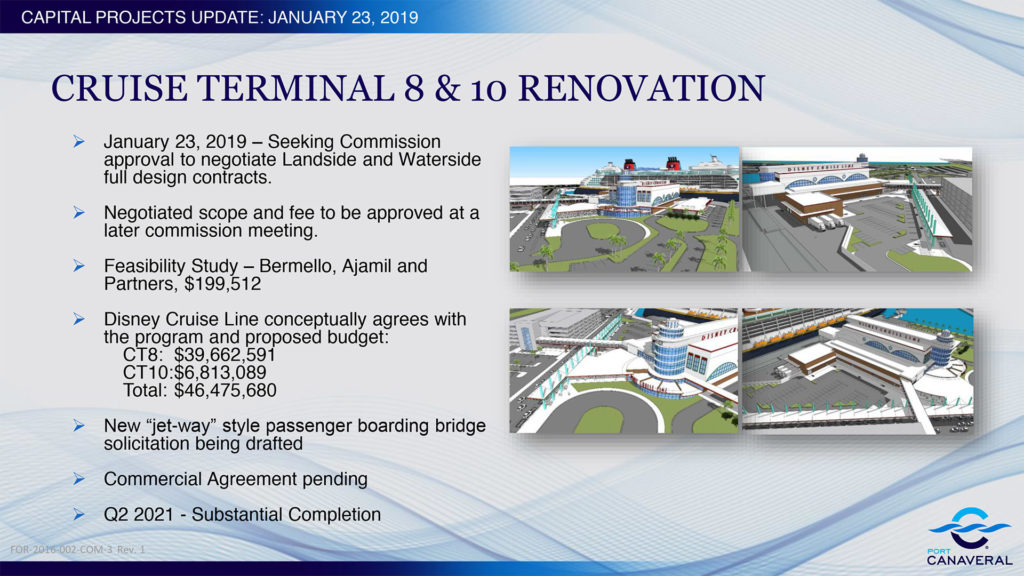 Cruise Terminal 8 AKA Disney Cruise Line’s terminal will undergo a significant renovation. Once the dust settles the terminal will offer up to 1000 seats and an expanded concierge waiting area. The drop off area will also be expanded to better accommodate cruise passengers arriving by car. A new baggage screening area is planned to enable the security teams to process luggage more efficiently. 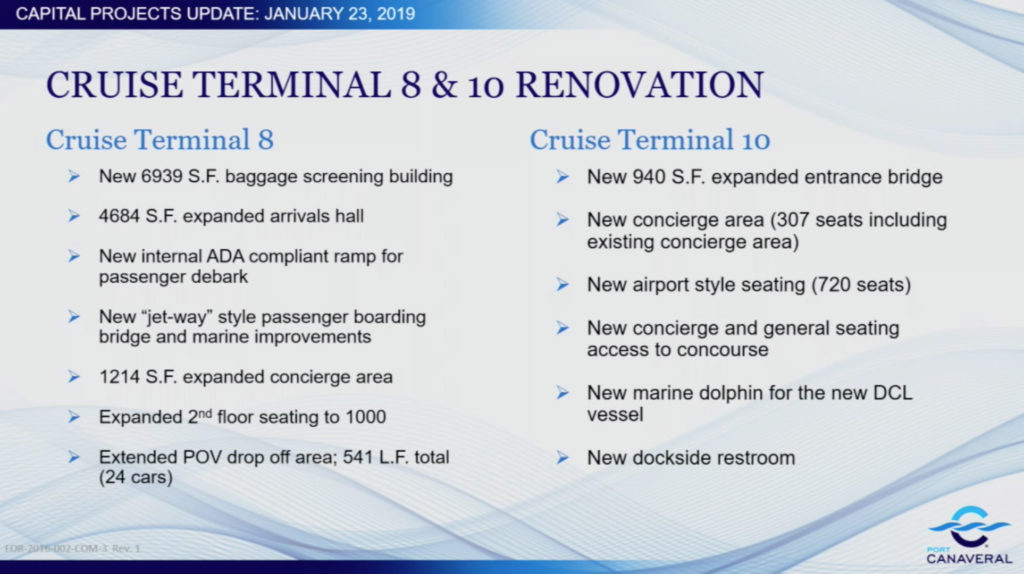 During the January 23rd meeting, there was a mention that Disney Cruise LIne will be moving towards a mobile checkin process of some sort which will enable the port convert some of the check-in desks to guest seating. A new jet-way will be installed to accommodate the new class of ships, which during the meeting port staff did a good job at not referencing the class as the Triton Class. Disney Trition still remains in the port’s public documents. There is roughly a 15-month lead-time on the jet-way and the purchase of said jet-way will also come up for approval at a future meeting.

Last June, Port Canaveral mentioned they hoped to finish substantial work on Cruise Terminal by May 2020 to allow for Carnival to shift over. This shift will then allow the port to begin the major renovation stage of Cruise Terminal 8 which will effectively close the terminal for a couple of months. As of the June 2018 meeting, Cruise Terminal 8 is slated to be shut down for May, June, and possible early July 2020. In the past, renovations has taken place on days when a ship is not at the terminal, but due to the scope of this expansion the terminal will need to be offline to allow contractors to work uninterrupted. During today’s meeting it was mentioned that BEA’s proposal will minimize the impact CT8. However, further details on how will limit the offline time of the terminal were not provided.