Disney Cruise Line is asking guests about various Day at Sea theme cruises in an all-new online survey. The survey asks users to if they are interested or not interested in 15 different Day at Sea themes. The themes on the survey include current offerings such as Marvel and Star Wars Day at Sea and the Halloween and the Very MerryTime themed voyages. There are two versions of the survey that I’ve seen, one asks users about a theme for the entire cruise while another version asks about the themes as a Day at Sea option. 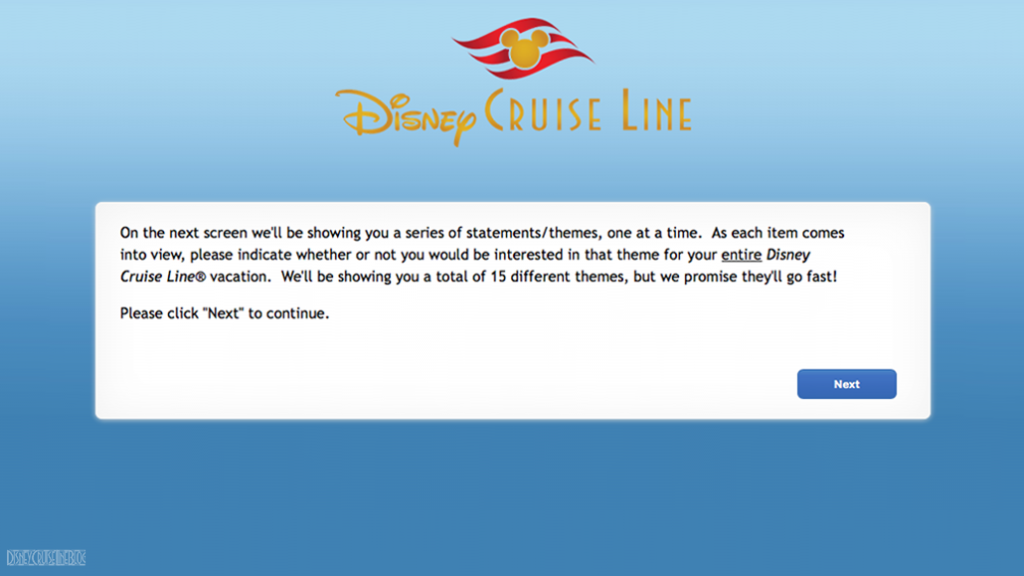 Below are the 15 different themes and the brief description from the survey starting with the current offerings.

Moving along to the next themed cruise which was previously offered during four California Coast cruises aboard the Disney Wonder in 2012. The Disney Wonder to this day offers unique Pixar character moments and entertainment.

That covers the current and recent slate of themed Disney cruises, lets move along to some new ideas – 10 to be exact.

First, I am heading to the 25th anniversary theme. I’m left dumbfounded why DCL chose to publicly ignore their 20th. Sure there is some merchandise and it was acknowledged by cast and crew members onboard and at corporate, but no mention on the Disney Parks Blog or social media on July 30th. Personally, I see this as a missed opportunity to celebrate the milestone and use that momentum to ignite excitement by sharing some new details of the fleet expansion. Oh well, thanks for allowing me to vent.

There are some solid ideas in these last 10 themes, but I think some of them would be better suited as recurring events or seasonal events along the lines of a Day of Frozen Fun offered during the summer on the Magic & Wonder. For instance, DCL could transition pirate night into a Princess and Pirate party akin to the Mickey’s Pirate and Princess Party hard ticket even at Magic Kingdom.

The two themes that really catch my eye and would be great for Day at Sea cruises are the Broadway at Sea and International Food & Wine themes. How great would it be to have one of the theatrical shows onboard be a rotating Disney on Broadway show. Talk about fresh evening entertainment offerings! Part of me wonders if this is a long term entertainment plan for the new ships. Then, take Epcot’s International Food and Wine festival to the high seas with mini booths set up around Cabanas with wine tastings in the adult lounges. I’d jump at the chance to sail for an all-inclusive international food festival – notice I left out the wine part of that all-inclusive, I’m keeping my expectations in check. 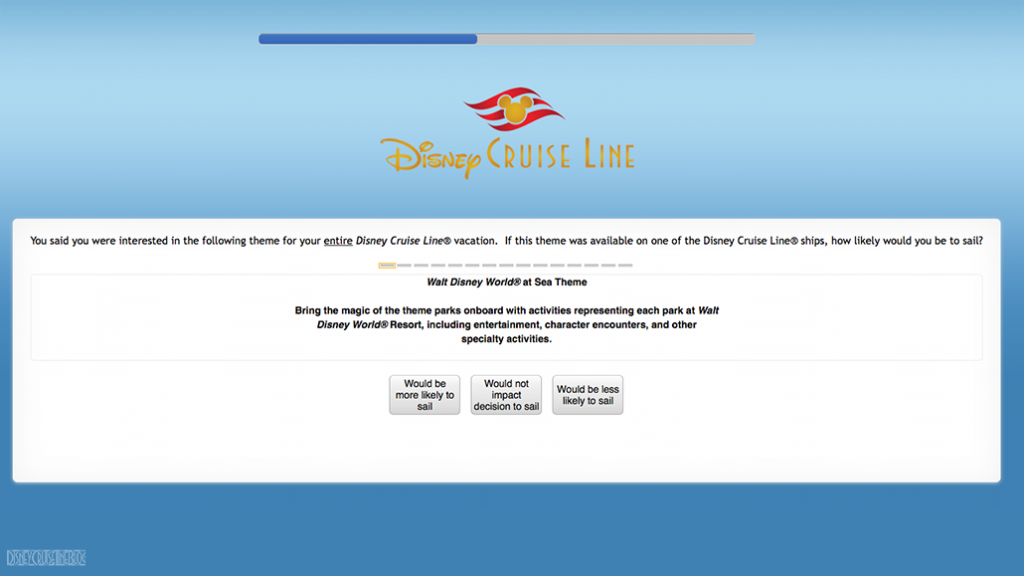 Overall, I think it is great that Disney Cruise Line is reaching out for guest feedback on potential future Day at Sea theme cruises. What do you think about these potential themes? Would any of them make you more or less likely to book a Disney cruise? Let’s have a public discussion about the various Day at Sea themes in the comments below. Special thanks to the co-host of Be Our Guest WDW Podcast and Touring Plans Blogger, Rikki Niblett for alerting us to the Disney Cruise Line Day at Sea theme survey.