Earlier today, Disney Cruise Line revealed plans for enhancements to the Disney Magic during an early 2018 dry dock. One of the major enhancements was Rapunzel’s Royal Table, an immersive dinning experience similar to that of Tiana’s Place on the Disney Wonder. Disney Cruise Line left out details on which of the three Disney Magic restaurant venues would make way for Rapunzel’s takeover. However, it was no mystery, it was Carioca’s.

In a round about way, Disney Cruise Line confirmed this with the latest news that Carioca’s will be closing early for refurbishment as it seems like Disney will need more than the two week dry dock to transform Carioca’s into Rapunzel’s Royal Table aboard the Disney Magic.

Emails are being sent to travel agents with guests The email states, Carioca’s will be unavailable during their sailing as the ares is being refurbished. As a result, Cabanas will come to life with enhanced entertainment nightly as one fo the evening dinner experiences with two open seating periods that coincide with main and second seating.

So far, we’ve learned this email is being sent to travel agents with clients and guests booked on the following sailings leading up to the February 23rd dry dock:

Below is a copy of the email for the 2/18 cruise shared with us by StorybookDestinations.com. 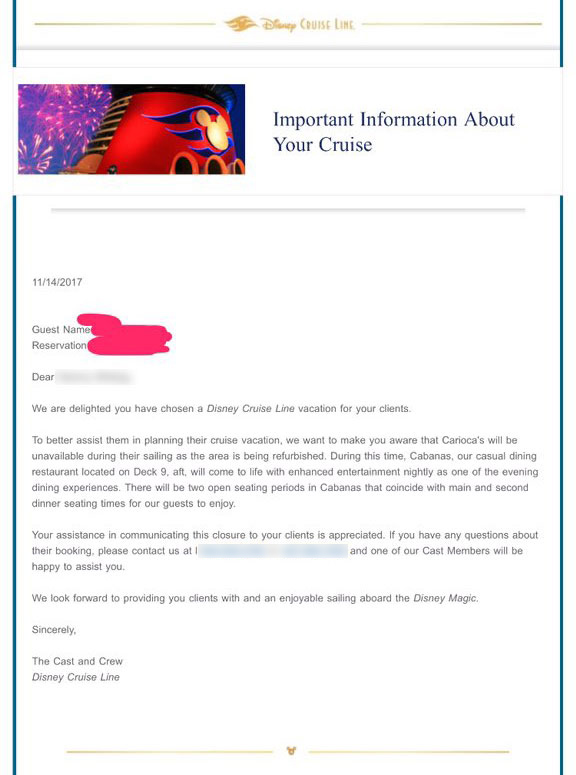 As of now, Carioca’s will close one cruise prior to dry dock to allow for the planned transformation into Rapunzel’s Royal Table. We will provide an update if any additional sailings are impacted by the refurbishment.

11 Replies to “Rapunzel’s Royal Table: Carioca’s Closing Prior to Dry Dock – Cabanas Will Serve as a Temporary MDR”