The following will be my spoiler free review of Disney•Pixar’s Coco. In Disney’s Thanksgiving’s release, viewers join young musical loving, Miguel (Anthony Gonzales) on interesting journey on Día de Muertos (Day of the Dead). Miguel, inspired by his idol, the late, great musician Ernesto de la Cruz (Benjamin Bratt) is a frustrated with his family’s generations-old ban on music. Following a mysterious and otherworldly chain of events, Miguel meets charming trickster Hector (Gael García Bernal), and, together, they set off on an adventure of music and mystery, resulting in the most unusual family reunion. Coco is directed by Lee Unkrich (Toy Story 3), co-directed by Adrian Molina (story artist Monsters University) and produced by Darla K. Anderson (Toy Story 3).

Following the screening, I took to Twitter with 280 glorious characters to share our initial reaction to Coco, saying that I enjoyed the film and the glorious visuals. After 22 years of feature films, I’m impressed that Pixar continues to wow me with the environments. I say this a lot with Pixar features, but Coco is visually stunning and full of detail that can only be appreciated with multiple viewings. I love everything associated with the marigolds. WOW. I should note, we saw the film in 2D, therefore, I cannot comment on the 3D elements. Emily liked Coco, but thought it was a little too predictable and saw the twist coming a mile away. Isabelle thought it was good. Finally, we all loved the cat. 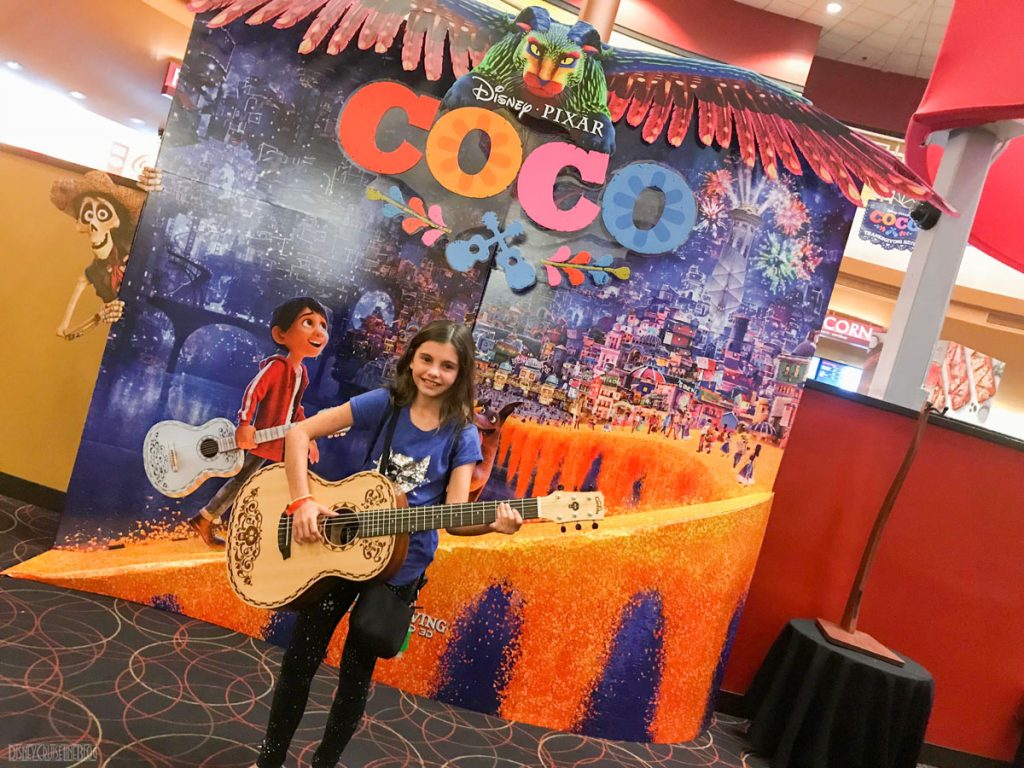 As I let Coco marinate in my mind, I came to have a greater appreciation for the story. This is a bit embarrassing, but I never really knew much about Día de Muertos other than it was a time to remember loved ones who have died. I found the filmmakers’ idea to use the family photos and gifts on the ofrendas and graves as an integral part of the story quite intriguing. Coco clocks in just short of 2 hours and to me, it felt long. However for a free Disney Cruise, I cannot put my finger on what could be done to speed it up. I just know I kept looking at my watch.

The music is catchy, I’ve found myself randomly belting out Remember Me much to Isabelle’s chagrin. Michael Giacchio’s score is growing on my, but it has yet to latch on like his others. This is likely due to the fact that I’ve transitioned to listening to Christmas music on shuffle instead of my normal routine of putting the latest soundtrack on repeat. It should be noted, Giacchino is featured in Coco – fans of the composer will not miss his appearance – it is more obvious than his cameo as an its a small world ride attendant in incredibly amazing film, Tomorrowland.

Overall, I enjoyed the film, but the rewatchability in my book is along the lines of WALL-E, and I LOVE WALL-E. It is just one of those films that I enjoy, but have a hard time watching over and over.

Pixar short? What short? Unless I missed one, Coco is the first Pixar film that does not include an original Pixar short. I guess Smash and Grab was a long shot and Dante’s Lunch has been online for around 6 months. So, what is a studio to do with a holiday release…

Moviegoers will have an opportunity to see a featurette, Olaf’s Frozen Adventure. Our Annual Passholder screening of Coco did not include the 21-minute Frozen special. However, thanks to the internet, I can tell you the new Christmas themed special was originally slated for a television debut on ABC, but John Lasseter and the filmmakers filmmakers decided it was too cinematic to not inhabit the big screen according to a June 2017 exclusive on EW.com.

Olaf (Josh Gad) teams up with Sven on a merry mission during the first holiday season since the gates reopened and Anna (Kristen Bell) and Elsa (Idina Menzel) host a celebration for all of Arendelle. When the townspeople unexpectedly leave early to enjoy their individual holiday customs, the sisters realize they have no family traditions of their own. So, Olaf sets out to comb the kingdom to bring home the best traditions and save this first Christmas for his friends. Directed by Emmy-winning filmmakers Kevin Deters and Stevie Wermers-Skelton, produced by Oscar winner Roy Conli, and featuring a screenplay by Jac Schaeffer and four original songs by Elyssa Samsel and Kate Anderson.

I’d like to hear what you thought about Coco as well as, Olaf’s Frozen Adventure? Seriously, I would like to know if I should go back to buy a ticket to see the short or just wait until our next cruise where I can hop into the Buena Vista Theatre and see it for “free”.