The Snorkeling Lagoon at Disney’s Castaway Cay is easily at the top of my must do list when visiting the island. Well, assuming the water is warm enough, I have a low tolerance for water temps less than 80ºF. Anyway, the 22-acre snorkeling lagoon is located off the family beach arching around the swimming area and the ropes course and features some memorable sunken treasures as well as a sea life. Disney does have a net to try and keep out, you know… larger fish with sharp teeth, but this does not guarantee to keep out these creatures.

There are two entrance locations, one at each end of the first family beach the one between Castaway Ray’s Stingray Adventure and the Conched Out Bar, not the one by Pelican Plunge.

The best part of the snorkeling lagoon is that it is free if you bring your own snorkeling gear. The only thing you will need is a mandatory snorkel vest which are free to borrow. They can be picked up at either Gil’s Fins and Boats or Flippers and Floats which are the two rental locations if you do not have your own equipment. The vests are also typically available hanging from the lifeguard stands and depending on your visit they may be available near the snorkeling lagoon entrance points. Regardless, these self inflated vests are mandatory, but you are not required to inflate them.

The vest can come in handy as there are not many areas that are shallow enough to stand on the sand. That sentence was very specific, you should avoid standing on any of the sunken treasures and coral formations. NOAA has a great guide on reef etiquette that is a must read before snorkeling.

There are a number of unique sunken treasures scattered around the snorkeling lagoon and the majority of the items are marked with buoys. If you look near the orange buoys you will find small submarine, a large anchor and a fishing boat. 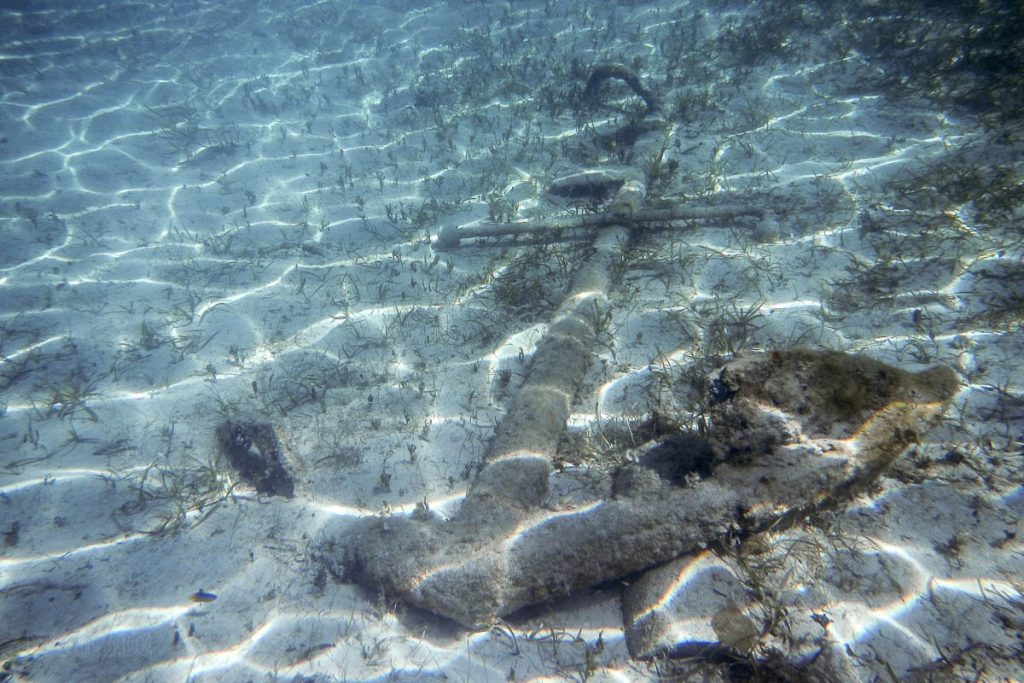 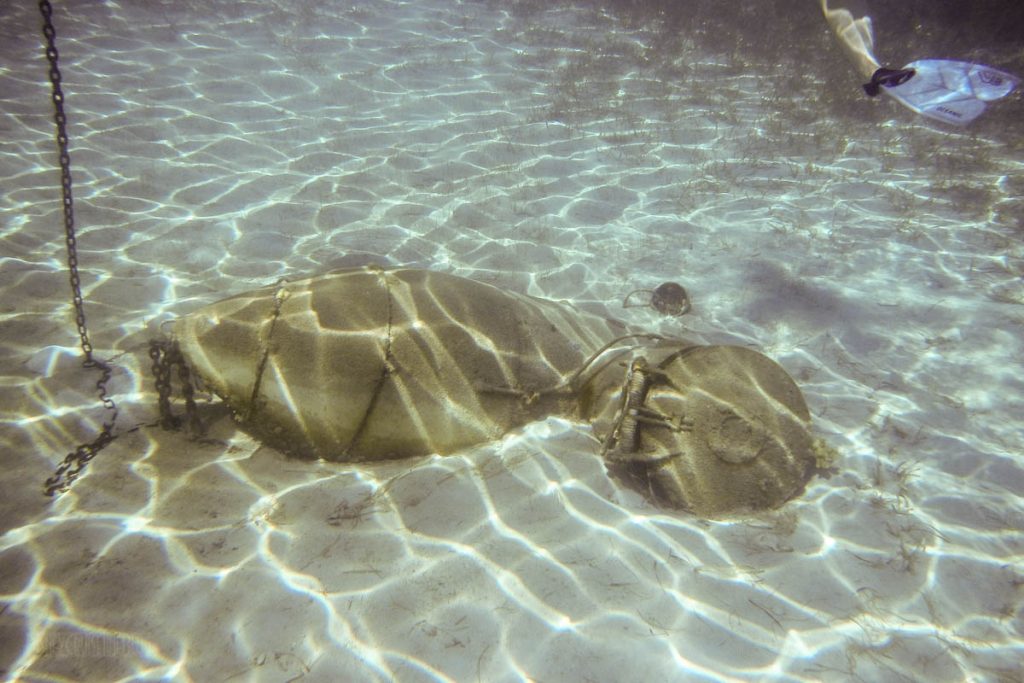 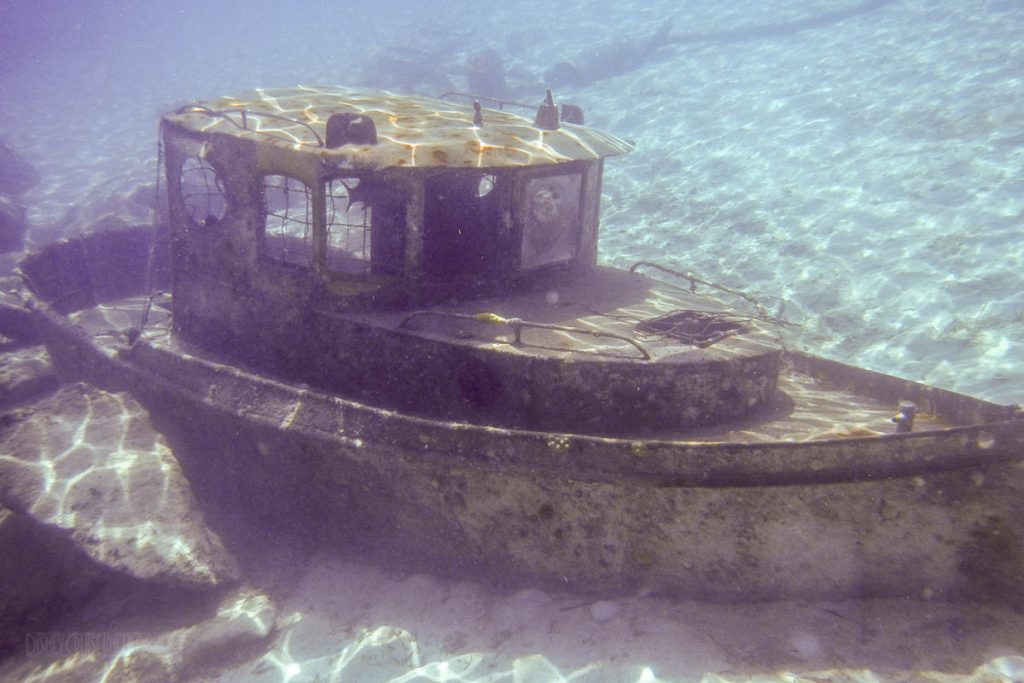 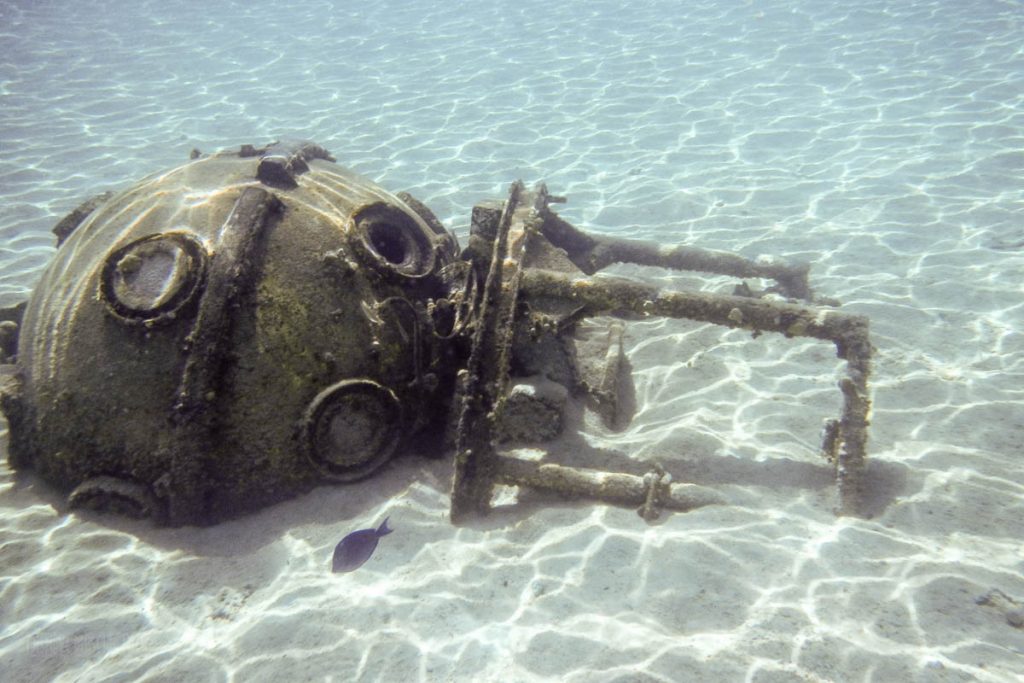 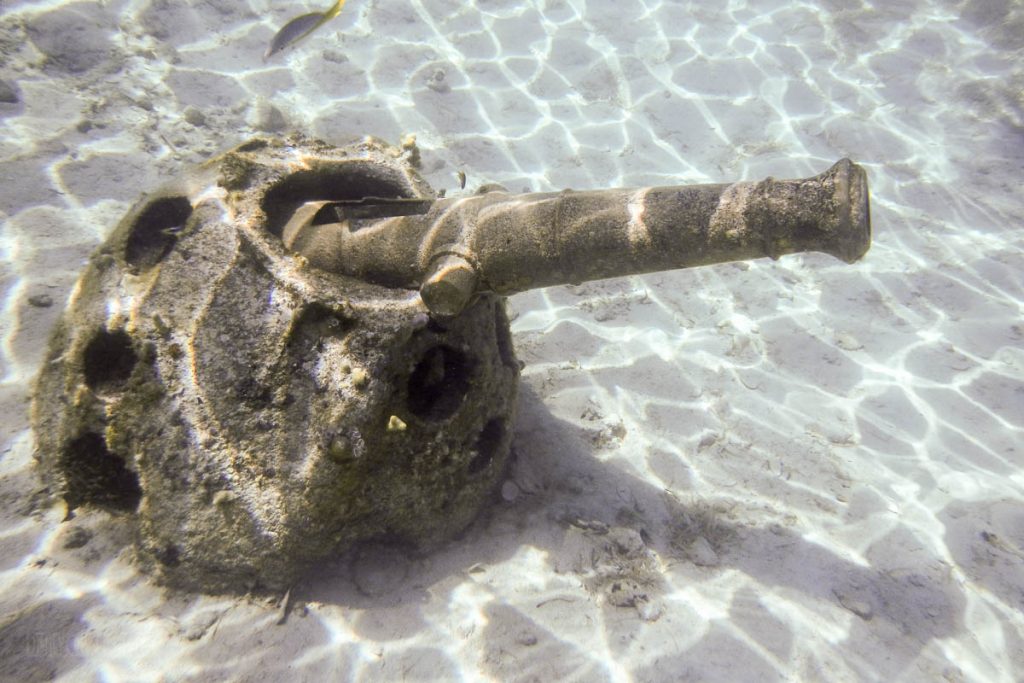 The notable treasures such as Mickey, Minnie and Nemo’s Sub from 20,000 Leagues Under the Sea can be found under the white buoys. 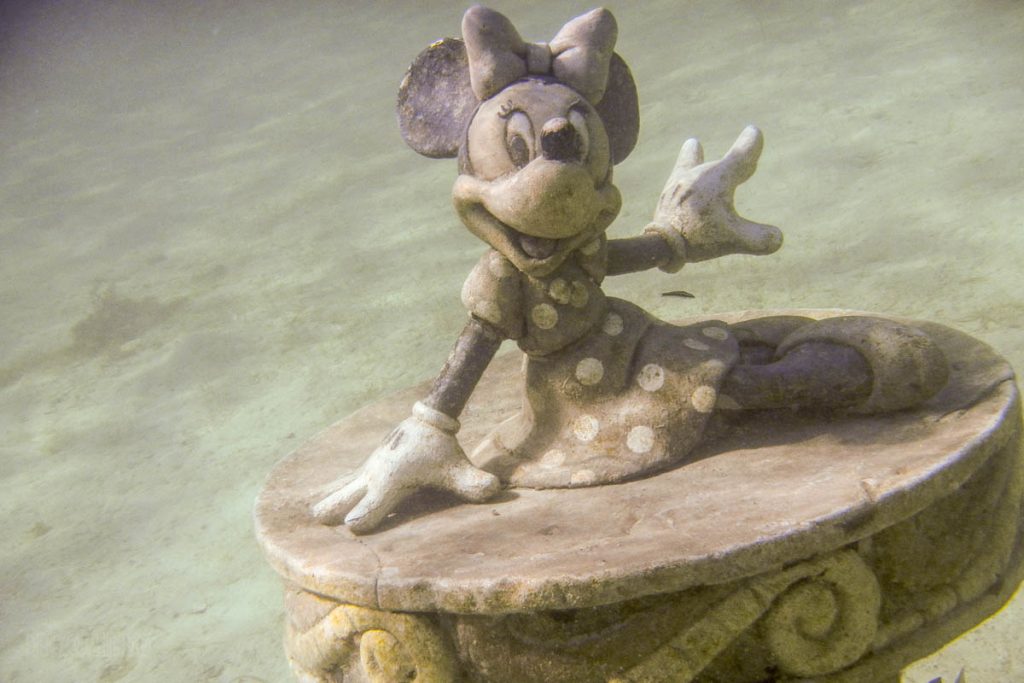 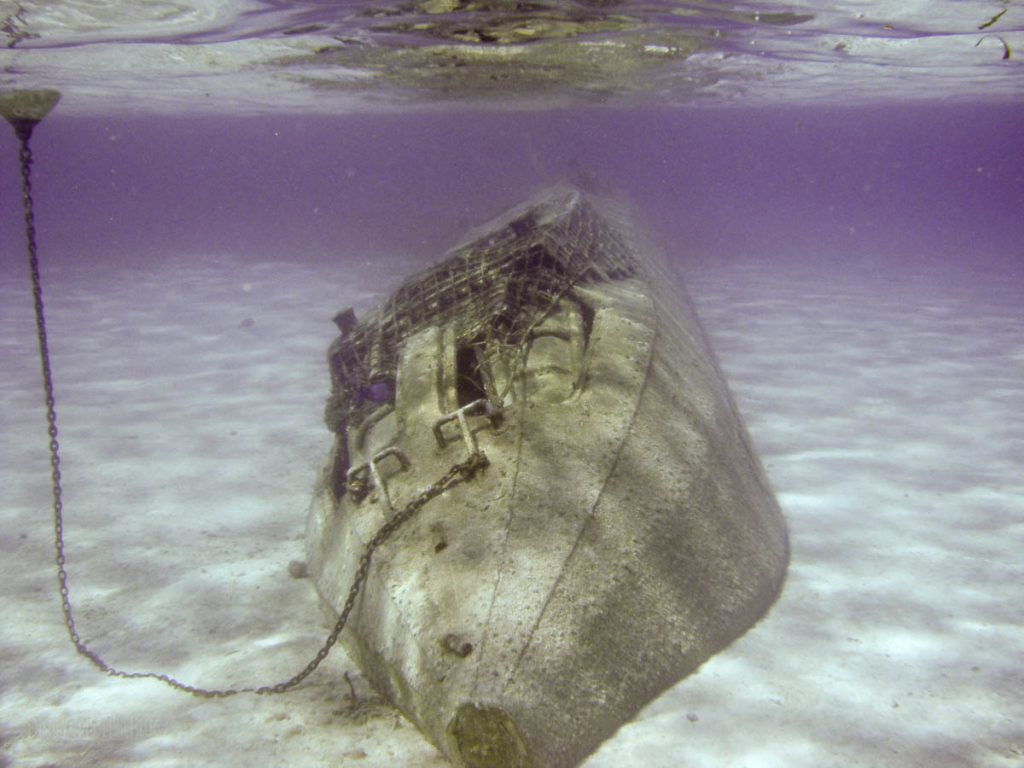 The Castaway Cay snorkeling lagoon map below shows the approximate locations of the major finds. I will say, Mickey is a swim so plan accordingly, 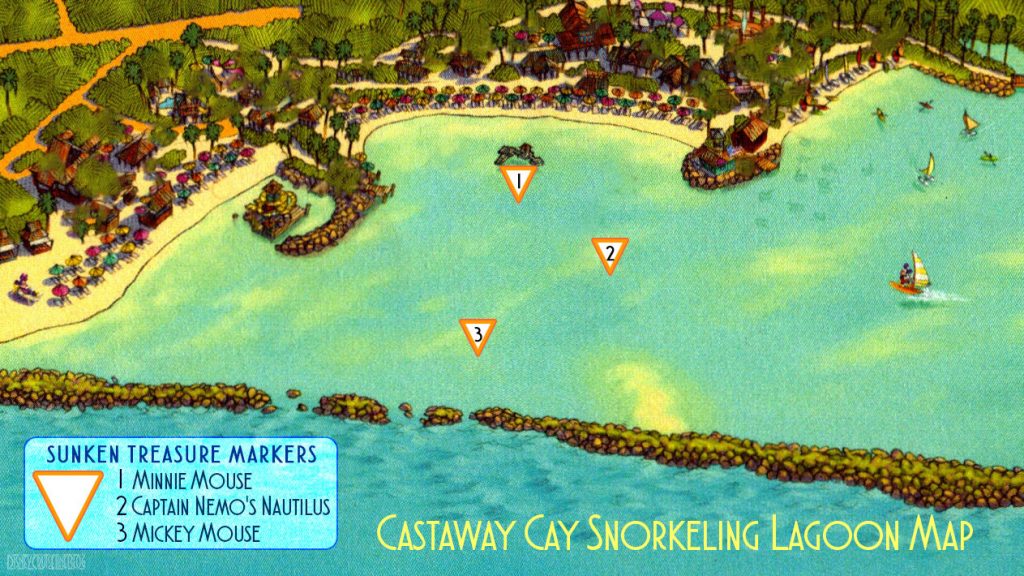 Below is a highlight video of the snorkeling lagoon’s sunken treasures that can be discovered at Disney’s Castaway Cay.

You may have noticed Isabelle’s non-traditional fins in the video. We discovered them years ago and they have been amazing. As a kid, when I was first introduced to snorkeling, my biggest issue was always fins. They were always bothering me and leaving blisters. So much so I stopped using fins for a long time until a couple year ago when I set out on a mission to find fins that I liked. Well, getting back on topic, when we first introduced Isabelle to snorkeling, we wanted to avoid this sort of issue as it can often be a deal breaker. These fins are US Divers neoprene swim fins and are easy to pack as they fold flat. Isabelle has never had an issue with them and still uses them to this day. I’m sure she will eventually move up to real snorkel fins, but for now they work and take up very little luggage space.

Oh, my best snorkeling with kids tip if you are getting your own equipment is to practice in a pool where they can stand and salt water is not a factor. The more variables you can eliminate when introducing a kid to snorkeling the better. Last but not least, wait to put your fins on until you get in the water, it is so much easier and you will reduce the amount of abrasive sand between your foot and the flipper. If you do not want to take that advice and you are set on putting them on land, then walk backwards. It is so much easier than trying to do the Donald Duck high step.

What is your favorite sunken treasure in the snorkeling lagoon?