When the Disney Wonder resumes service next month a slew of all new character experiences will delight young sailors in the Oceaneer Club’s re-imagined spaces. The Oceaneer Club, open to children between the ages of 3 and 12 will features all new spaces including Marvel Super Hero Academy, Andy’s Room, and Club Disney Junior. The Disney Parks Blog recently announced the following character experiences. 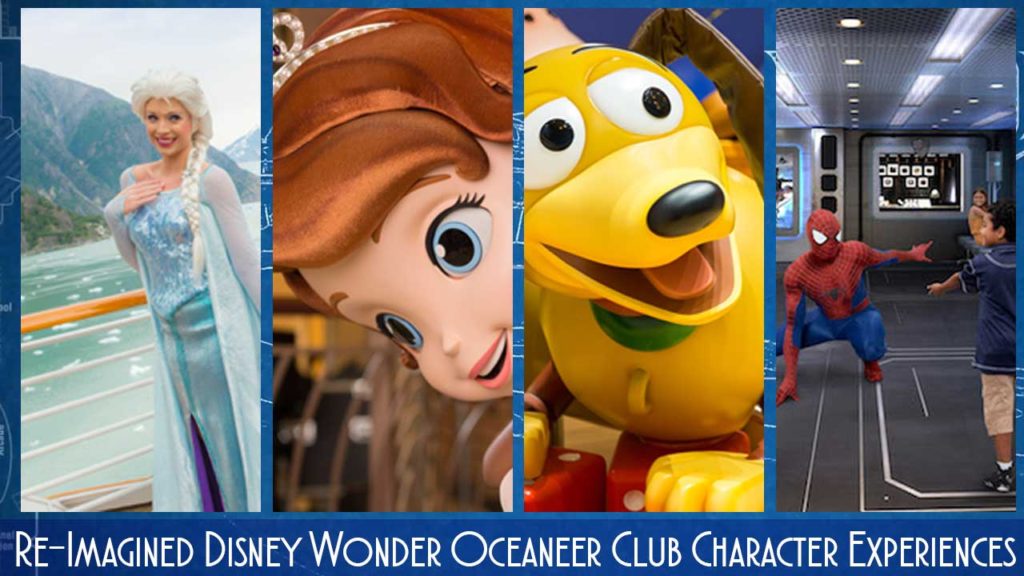 Frozen Adventures: A Royal Frozen Coronation with Anna and Elsa
It’s Coronation Day! To get ready, children learn the rules and responsibilities of royalty and make their own crown. Then they play a role in acting out a story set in Arendelle. Once the kids are truly prepared for their coronation, Anna and Elsa arrive to join the fun and lead the ceremony. The royal sisters spend time with each of the children, who all receive an official coronation certificate.

Marvel Super Hero Academy: Spider-Man’s Web-Warriors 101
Hosted by your friendly neighborhood Spider-Man, this special training course teaches future Super Heroes to hone their reflexes, speed and minds – just like Spider-Man. Kids create their own masks, test their wits through “spider-sense” training and learn how to climb just like Spidey. After the training, Spider-Man declares the kids Web-Warriors.

Club Disney Junior: Sofia the First Magical Storytelling
This enchanting activity is hosted by some of Cedric the Sorcerer’s apprentices. The kids will design their own sorcerer hats and learn how to properly wave their wands and cast spells. To make the lesson even more fun, the kids act out one of Sofia’s adventures. In the end, Sofia appears to congratulate the children on their work and take a photo with them.

Andy’s Room: Woody’s Roundup
The adventures of “Toy Story” come to life for children when they enter the world of Woody with this cowboy-themed activity. With inspiration from “Woody’s Roundup” playing on the larger-than-life television screen, kids learn how to walk and talk like a cowboy before acting out an episode together. Next up, they learn how to line dance, just in time for Woody and Jessie to arrive and join everyone in a hoedown.

This Disney Wonder will remain in dry dock for the remainder of this week. Then she will be reintroduced to the sea and make her way back to Port Canaveral for some finishing touches before moving on to Galveston for her first guest cruise on November 10th, a 4-Night Western Caribbean Very MerryTime voyage.