Regal Entertainment Group just announced that members of their Regal Crown Club will have a chance to win a Disney Cruise Line vacation with the purchase of a ticket to Disney•Pixar’s Finding Dory hitting theaters on June 17th.

“Finding Dory is a beautiful look into the world of the deep blue sea and now we are offering a chance to view it with your own eyes on a Disney Cruise Line vacation,” said Kelly Hawkins, Vice President of Loyalty Marketing at Regal Entertainment Group. “The Crown Club delivers the biggest and best contests and rewards, and our members are enjoying those benefits.” 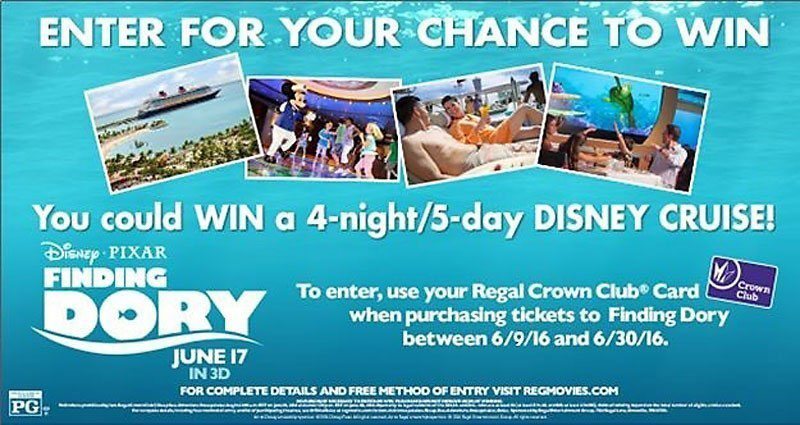 The 4-Nigth Bahamian cruise aboard the Disney Dream is valued around $6,328.28 and according to the official rules includes round trip coach airfares between the major U.S. gateway airport closest to the winner’s residence and the Orlando International Airport, round trip ground transfers between the Orlando International Airport and Port Canaveral. The 4-Night cruise for four includes one stateroom, pre-paid gratuities, Taxes, Fees and Port Expenses as defined on the Disney Cruise Line website.

All travel for the prize must occur before June 30, 2017 (although sail dates end in May), be booked at least 45 days prior to the chosen sail date. The winner must choose from one of the following sail dates (subject to availability): Denotes: 🎃Halloween on the High Seas Cruise, 🎄Very MerryTime Cruise

The Sweepstakes is open only to legal residents of the 50 United States and the District of Columbia who are 18 years or older (19 years or older in AL and NE; 21 years or older in MS) at the time of entry, subject to all applicable federal, state and local laws and regulations. The winner will be selected in a random drawing from among all eligible entries received.  The random drawing will be conducted on or about July 7, 2016. For additional contest details and free method of entry, check out Finding Dory Deep Sea Sweepstakes. 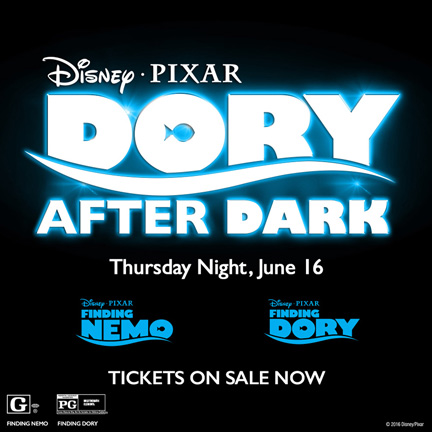 Additionally, select Regal Cinemas will be showing a double feature of Finding Nemo and Finding Dory for a special Dory After Dark event.  Regal is offering Crown Club members an exclusive discount price of $17.99 on tickets and a $5 medium popcorn and medium drink coupon.  This one-night event will take place on Thursday, June 16, and guests will receive a Dory After Dark reusable bag and an “I Speak Whale” button.  For a list of participating Regal theatres, additional information, please visit Finding Dory Double Feature.

Regal fans are encouraged to like Regal Cinemas’ Facebook page and download the Regal Movies app. Moviegoers can program their favorite theatre and purchase tickets all from their mobile device. The Regal app also gives patrons the ability to upload their Regal Crown Club card straight to their phone for easy access while on-the-go. Through the industry-leading Regal Crown Club, 13-million patrons each year accumulate credits at the box office and concession stand to earn rewards including free popcorn, soft drinks and movies. Free membership is available at the box office or online at REGmovies.com/Crown-Club.

Complete rules and the fine print on the sweepstakes can be found here. Good Luck and please remember we are not affiliated with this sweepstakes, Regal or Disney. Just passing along this information.