On May 9, 2016, Vancouver Fraser Port Authority revealed the recipients of the Blue Circle Award for 2015. Disney Cruise Line was one of three cruise lines to earn the award. Holland America Line and Princess Cruises were the other cruise lines earning the port’s annual environmental recognition. The 2015 award makes this Disney Cruise Line’s forth Blue Circle Award. 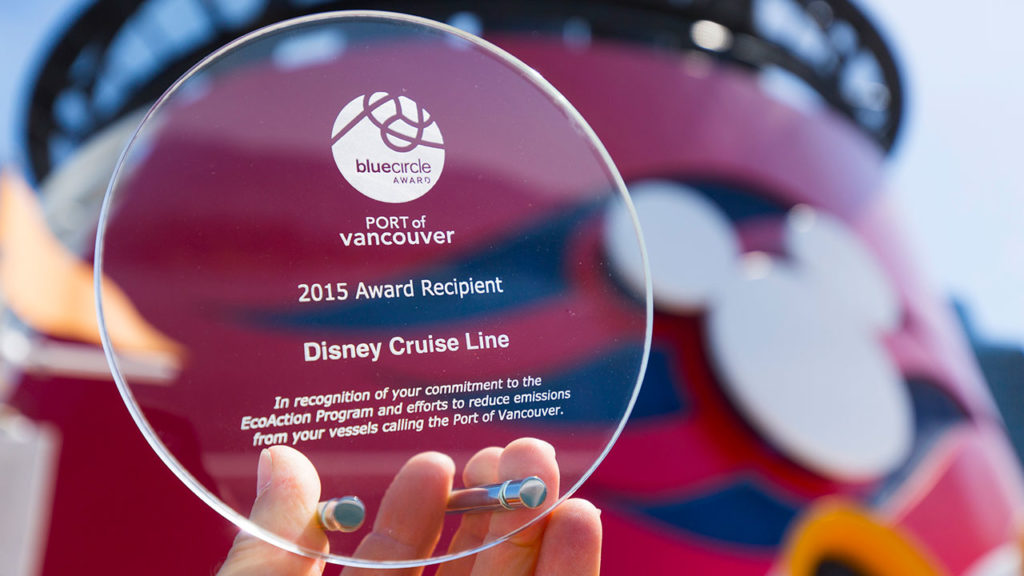 The Port of Vancouver is equipped with shore power technology that allows cruise lines to turn off the ship’s engines when it’s docked and plug in to the port’s power source allowing all onboard services to run as normal. By connecting to shore power, Disney Cruise Line is able to save fuel and reduce air emissions. Three of the Disney Cruise Line ships, Disney Wonder, Disney Dream and Disney Fantasy, are specially designed to use shore power when visiting other equipped ports.

Port Metro Vancouver established the Blue Circle Awards in 2009 to acknowledge industry commitment to port sustainability. A Blue Circle Award recognizes and honours vessel operators who make environmental choices that go above and beyond regulatory requirements to reduce air emissions.

The Vancouver Fraser Port Authority’s EcoAction Program sets goals for air emissions reductions for ocean-going vessels that enter the Port of Vancouver, helping support the port authority’s long-term sustainability objectives while benefiting industry and communities. As part of the program, vessels are entitled to a discount of up to 47 per cent of harbour dues by choosing a variety of eligible fuels, technology options and environmental programs and classifications. The Blue Circle Awards celebrate marine carriers with the highest rate of participation in EcoAction.

“As stewards of Canada’s largest port, we take seriously our responsibility to facilitate the nation’s trade priorities and ensure that goods are moved safely, while also minimizing impact on the environment and our neighbouring communities,” said Robin Silvester, President and Chief Executive Officer at the Vancouver Fraser Port Authority. “The Blue Circle Awards celebrate industry commitment to sustainability and are awarded for only the highest emissions reduction achievements. On behalf of the port authority, I congratulate the 2015 award recipients.”

Click here to read more on how Disney was honored to receive this award.