I have dreams, like you – no, really! I’ve got a dream where O’Gills was permanently re-imagined during the next dry dock into the Snuggly Duckling from Tangled. Well, you can’t always get what you want, but if you try sometimes well you just might find you get what you need. Ok, I didn’t really try, but my dream sort of came true on the Disney Magic. On the nights Tangled: The Musical is performed, O’Gills transforms into the Snuggly Duckling!!!!!!!!!!!! I do not normally go overboard with explanation points. This little re-retheming of O’Gills if only for one night makes me extremely happy. 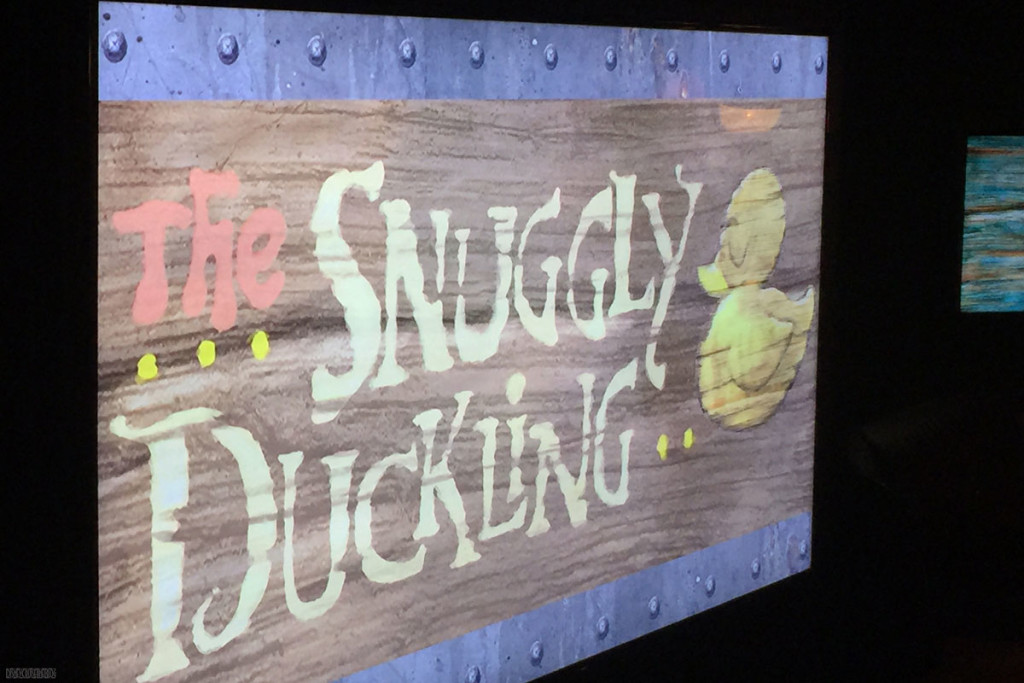 While the the official debut of Tangled: The Musical occurred on November 11, 2015, there was a sneak peak for guests sailing on November 10th. I was fortunate enough to received an email from someone who wishes to remain anonymous that sailed on the Disney Magic’s November 6, 2015 5-Night Western Caribbean Cruise. They were kind enough to share some photos of O’Gills under new management. 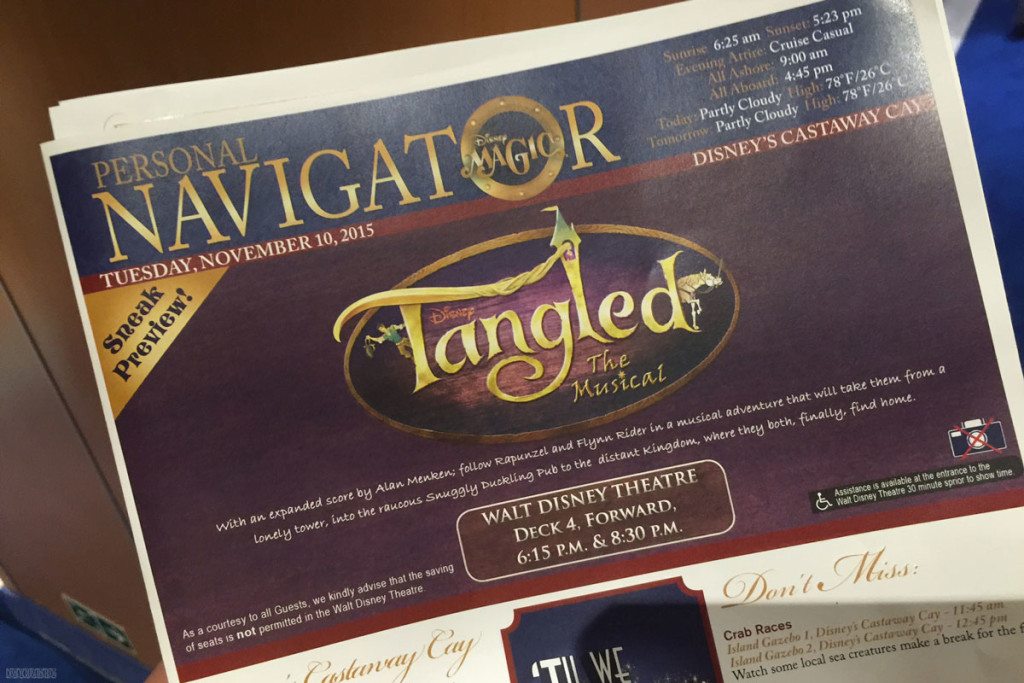 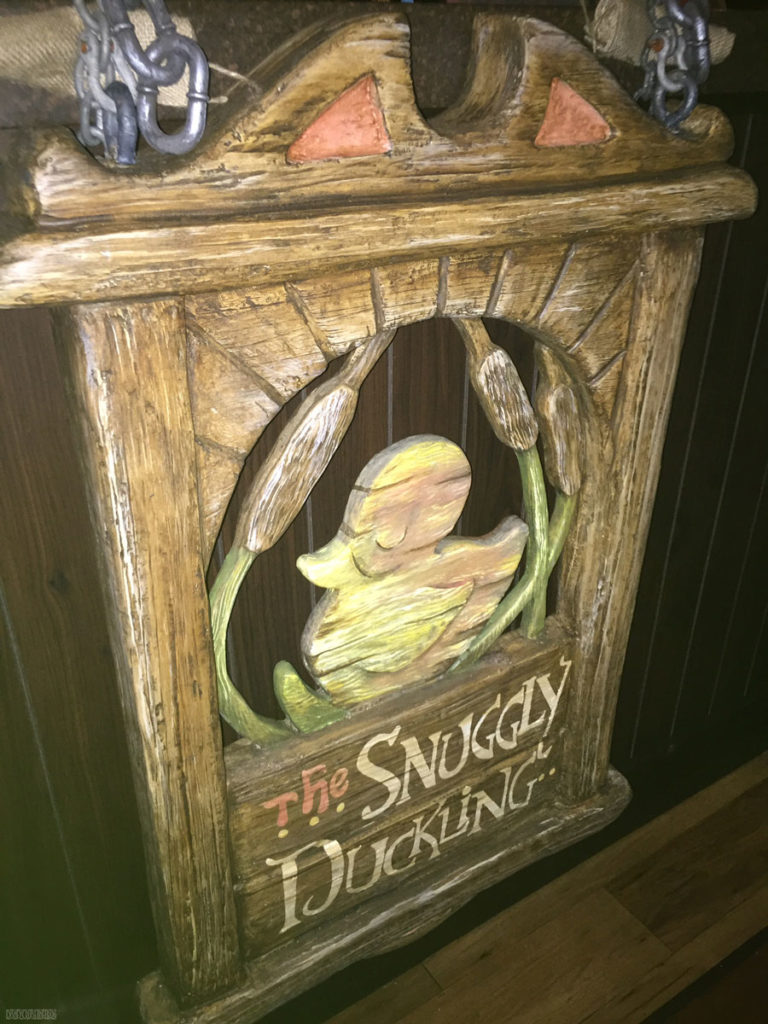 Slug a Thug and Get a Free Mug! (Sorry all out of mugs…) banner hangs above The Snuggly Duckling Bar which as you can see in the background is under new management. Even the bartenders are dressed appropriately for the night. Seriously, all out of mugs? Come on Mr Connelly, surely you have been to Grogg Grotto. You are leaving money on the table by not having a ceramic Snuggly Duckling souvenir mug. 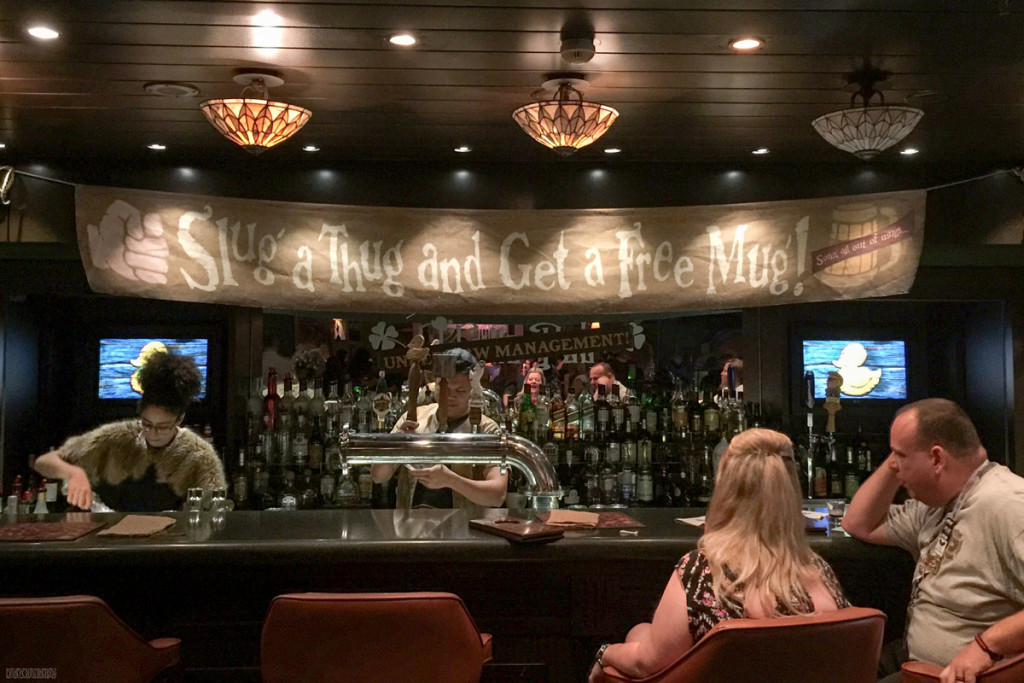 Another banner advertises the Pub Sing Along… Over under on how many cruises have groups starting an I’ve Got a Dream sing along. I’ll say 1 in 4 cruises. 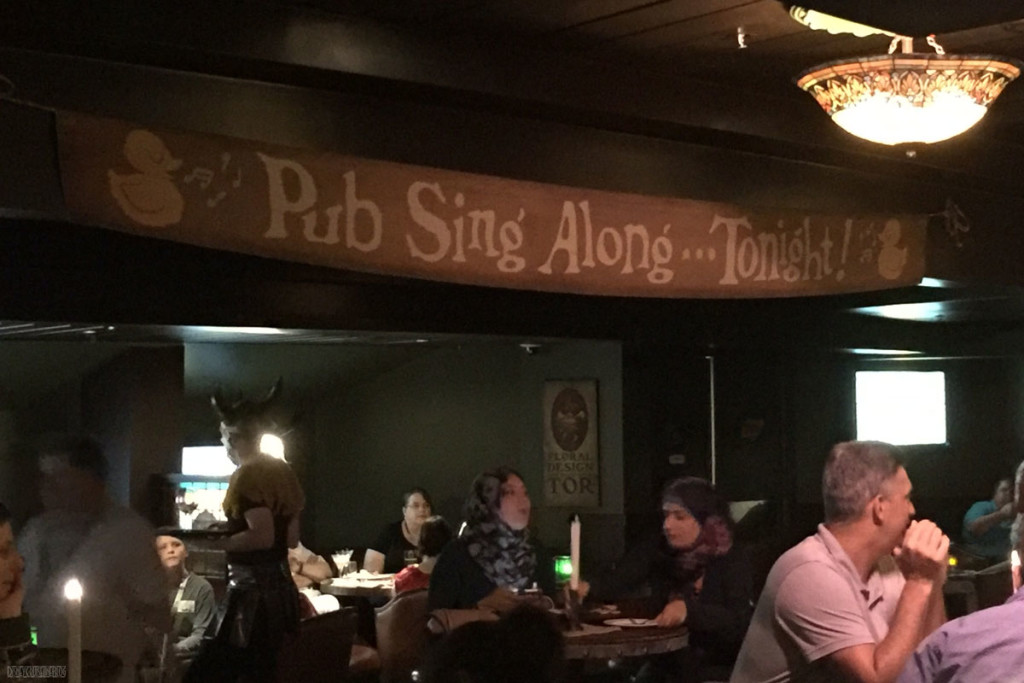 On the way out of The Snuggly Duckling there is banner that reminds everyone to follow your dreams.

In the main dinning rooms there was a special The Snuggly Ducking dessert menu. The first item is Wanted Flynn Rider Mud Pie, a smashed chocolate fudge soil and vanilla anglaise. The second is Rapunzel Lantern, a lemon infused cheesecake with raspberry sauce smudge. 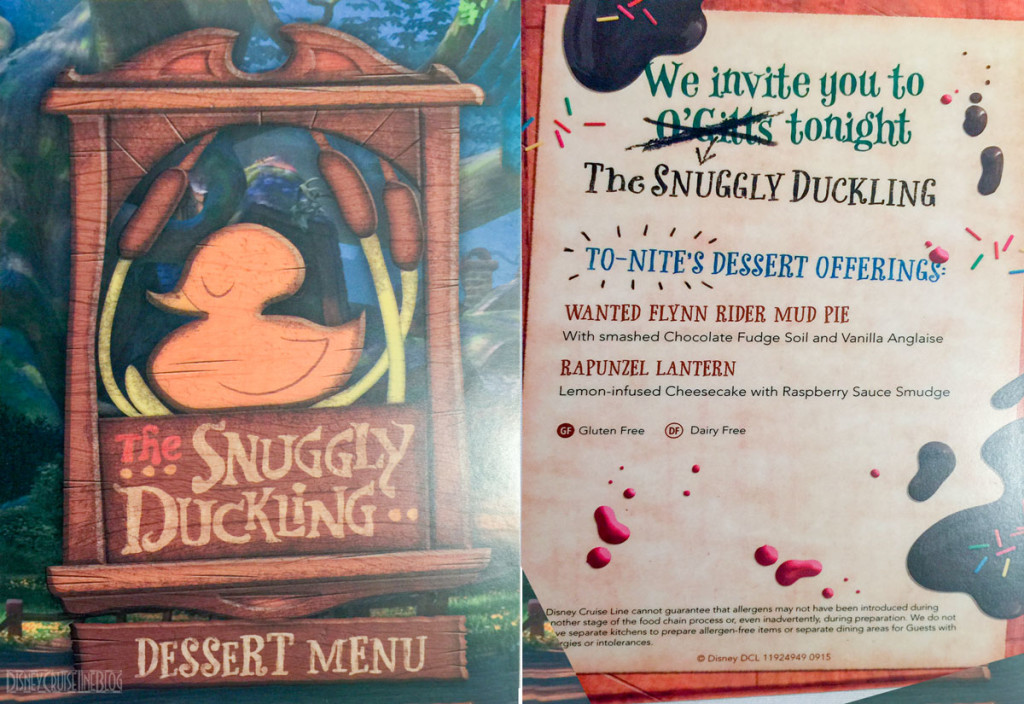 Disney Cruise Line bingo not your thing? You are in luck, you can play THUGO. At least for the time being until some notorious thugs, gangstas (It’s Ulf and Biggie, Big Nose) and borrow all the snuggly duckling chips. I give it 3 weeks for these to start showing up on eBay. 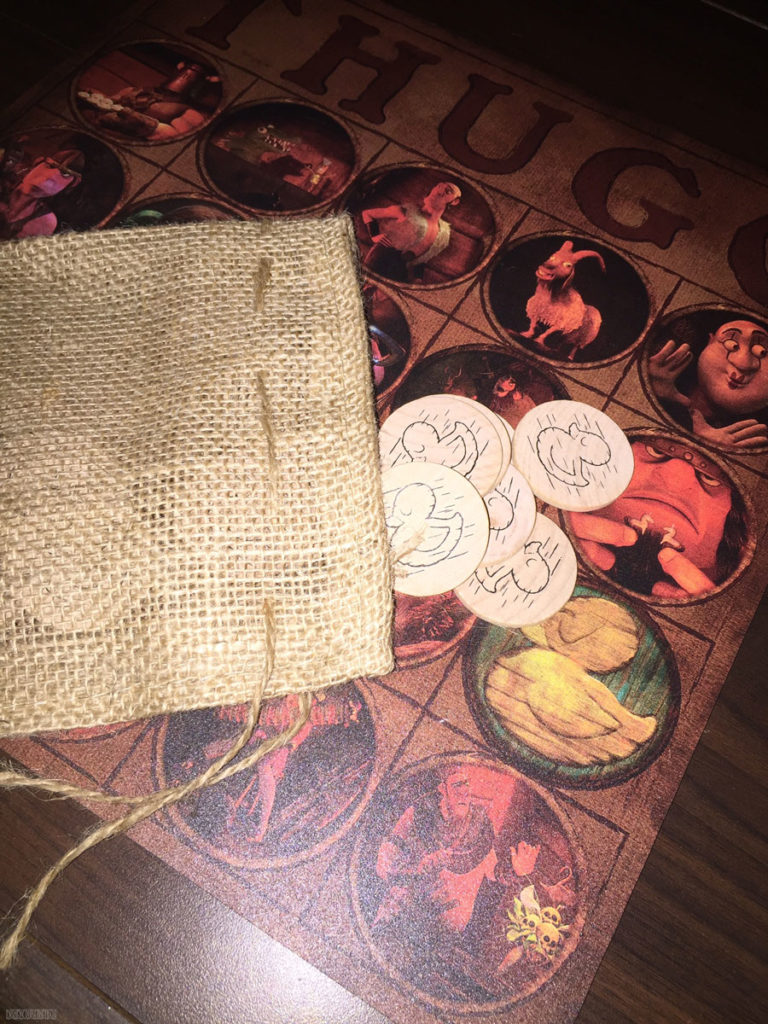 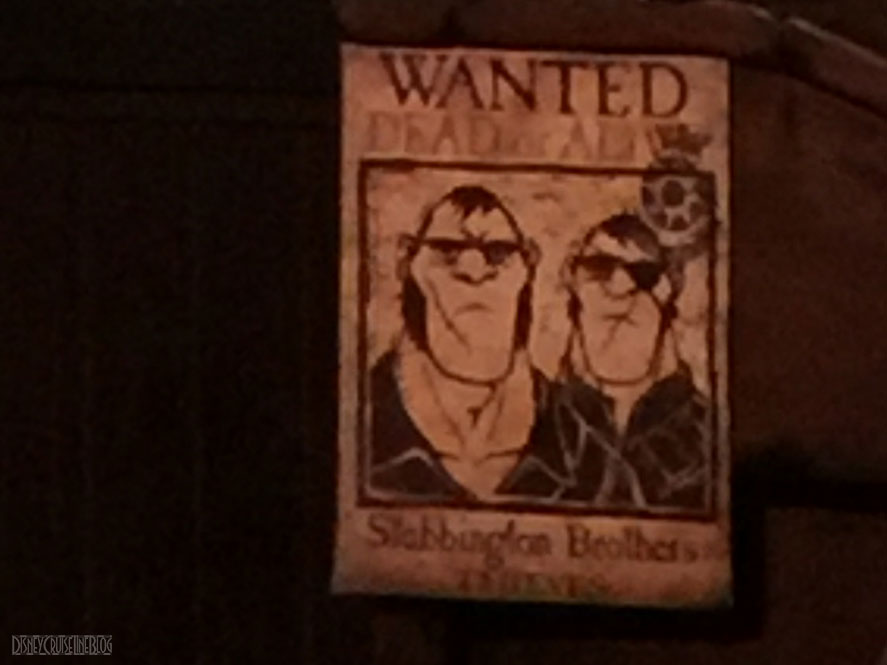 The area around the Disney Magic’s Walt Disney Theatre receives some decoration with the iconic flower banners from the film. 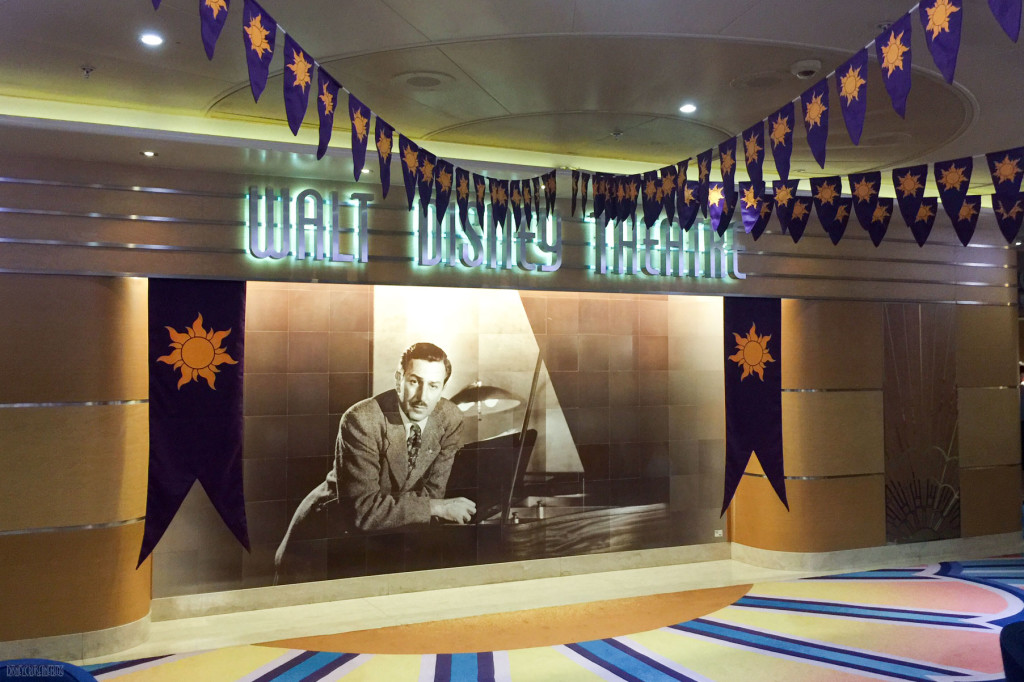 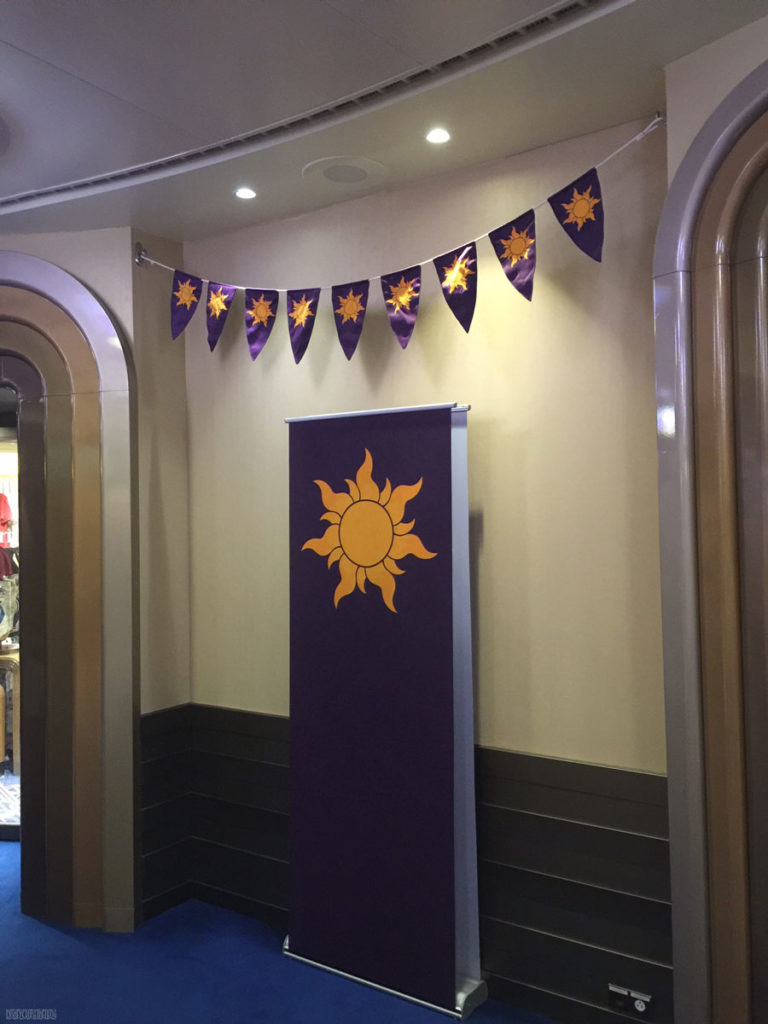 On a serious note… I am not kidding about a Snuggly Duckling souvenir mug along the lines of Trader Sams. Can we please make this happen before the lets say February.

8 Replies to “Tangled: The Musical – O’Gills Transforms into the Snuggly Duckling”