On October 6, 2015, leaders from cruise lines and Mexico officially opened the FCCA Cruise Conference & Trade Show-the largest cruise conference in the Caribbean and Mexico and one of the best ways to target the cruise industry and maximize its benefits. During the opening ceremony Karl Holz, president of Disney Cruise Line, delivered the keynote address. 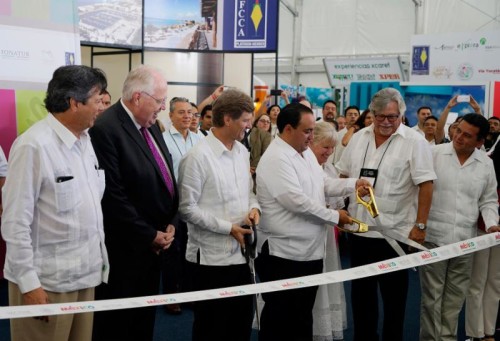 Mayor Marrufo welcomed all attendees-nearly 1,000 cruise tourism stakeholders from tour operators and taxi drivers to port authorities and ministries of tourism, along with 100 cruise executives-to “one of the most important ports in the world” and invited all to enjoy the wonderful sites that would be on display during and after the event.

Paige told that hosting the FCCA Cruise Conference & Trade Show displays Mexico’s hard work-not only for coordinating the event, but also for developing a prominent cruise destination. ” We are here to revel and learn from the success,” she said and pointed out that Cozumel received more than 3.3 million passengers from FCCA Member Lines last year-one million and nearly 50 percent more than in 2007, when Cozumel last hosted the event.

She spotlighted cruise tourism’s significance to the entire country, with Mexico welcoming more than 5.5 million FCCA Member Line passengers last year, expecting nearly 5.7 million this year and more than 6.1 million for 2016. She shared some of the economic benefit from this industry, with cruise tourism directly contributing to $565.4 million in expenditures, along with 15,9990 jobs paying wages of $93.5 million, during the 2006/2007 cruise year-when the country overall participated in the Business Research & Economic Advisors study, Economic Contribution of Cruise Tourism in Mexico.

She also told attendees that Mexico’s resurgence showed the importance of engaging a proactive approach and constant communication, ensuring a safe environment, and always improving products.

Holz delivered the keynote address and discussed the industry’s growth, with “continued bookings strength, the introduction of innovative new ships and experiences, and a commitment by the industry to continually up the ante with technology, entertainment, dining and virtually every other aspect of the cruise vacation,” along with port development. He displayed this growth by mentioning that passenger arrivals in the Caribbean, Latin America and Mexico have jumped from 8 million to more than 20 million expected from FCCA Member Lines this year.

“The question then becomes, how does the Caribbean keep growing with the expansion of the cruise industry?” He told it takes “adapting to the changing marketplace, taking risks, launching innovations and ultimately delivering on ever-evolving consumer expectations… We must continually adjust our approach in order to meet consumer demands and introduce exciting new dimensions to our business – dimensions that will keep drawing cruisers to the Caribbean.”

This model is similar to the cruise lines’ own way of differentiating and innovating, he said. He then mentioned Disney’s focus on telling stories and assured the audience that the industry’s “greatest stories have yet to be told…As long as we can envision a brighter tomorrow, there’s no limit to where our imagination can take us.”

Arison awarded winners of the annual FCCA Foundation Children’s Essay Contest, which provided more than $30,000 to Caribbean and Latin American essayists and schools in 2015.

Governor Borgepraised the growth from hosting the last event and expressed excitement for again actualizing the event’s potential. He highlighted Quintana Roo’s improved infrastructure and product, touted the jobs and improving social conditions resulting from cruise tourism, and assured that “Mexico wants to keep growing with the cruise industry.” Secretary Hon. Cordero, also representing President Enrique Peña Nieto, elaborated on the importance of tourism overall to the entire country, representing nearly 9% of GDP and providing jobs to 8 million people, including 20% of employment of young persons and a large segment for small to medium businesses and entrepreneurs. He then shifted to cruise tourism, reiterating the passenger arrivals and focusing on the significance of destinations like Mazatlan and Vallarta recuperating.

“We want to work as partners with the cruise industry,” he said and told how the country continues to do so by constantly asking, “What are your needs” and “how can we innovate new products?”

“We are aware we are in a world of constant competition,” he said and unveiled some of Mexico’s competitive advantages, including location and source markets that travel and spend, along with the “secret weapon-Mexicans…a population that likes to treat people well.”

2015 FCCA Cruise Conference & Trade Show was held in Cozumel, Mexico. October 6th was a big day for Disney Cruise Line. Karl Holz gave the keynote, the Disney Magic was also in Cozumel and DCL announced a batch of sail dates for early 2017.