The Panama Canal Expansion project entered the countdown phase this month with 93% of the overall project complete. The final leg of the project focuses on the third set of locks which is currently just over 90% complete. The video below is the official August 2015 status update from the Panama Canal.

The breakdown of the southern plug was briefly shown in the first video. The following video provides a longer look at the plugs removal and the Pacific Ocean waters meeting the Cocoli locks for the first time.

The extension is the largest Panama Canal infrastructure project since the waterway’s original construction will create a new lane of traffic along the Canal through the construction of a new set of locks, increasing the waterway’s capacity. The new locks will have three chambers, water-saving basins, lateral filling and emptying system & rolling gates.

Currently, the Disney Wonder is the only ship in the fleet able to transit the original Panama Canal. Once complete the New Panama Canal will enable all of Disney Cruise Line’s ships to transit. According to the Disney Dream technical information sheet, the air draft of the Dream/Fantasy is 188ft which is under the 201ft limit imposed by the Bridge of Americas.

The following infographic is a not to scale, modified depiction of the World canals created by the US Energy Information Administration with the addition of the Disney Cruise ships. 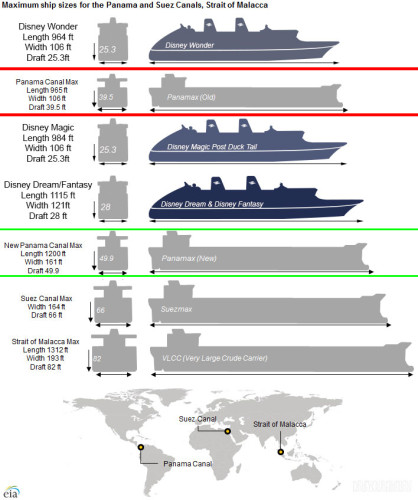 According to various reports, the Panama Canal Expansion project is slated to be complete and operational by April 2016.