Remember when DCL announced the Fall 2016 sailings and there were no 2-Night Getaway sailings from New York. While it may have been disappointing to those hoping for this unique itinerary, it looks like DCL knew a change was on the horizon. Beginning in 2016, foreign-flagged cruise ships will no longer be permitted to sail an itinerary from a United States homeport that does not stop at a foreign port of call. Luckily, DCL did not offer cruises-to-nowhere in 2016. Consider this more of a FYI story than something that will impact guests booked on a future Disney Cruise since this will apply to all cruise lines with foreign-flagged ships sailing from homeports in the United States.

I received an email from Dennis C., the other day informing me his cruise aboard the Carnival Vista on November 4, 2016 from New York has been canceled due to recent changes in how ships are cleared into and out of the United States by U.S. Officials. According to the letter he received from Carnival Cruise Lines (included below), beginning in 2016, certain short duration cruises without a foreign port of call are will see an itinerary change. 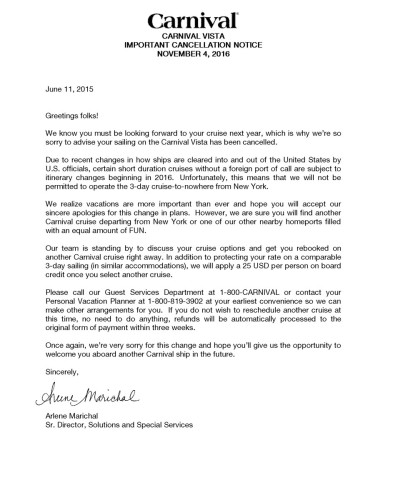 After an unsuccessful search for official information on these operational changes, I contacted U.S. Customs and Boarder Protection. I was informed my email request would take about 2-3 business weeks for a response. Considering this is not an urgent manner, I will not be calling.

I did find the following statement from the Cruise Lines International Association (CLIA), “While itinerary decisions are made by individual cruise lines, beginning in 2016, in compliance with US laws and regulations, foreign-flagged cruise lines operating out of US ports are not to offer cruises for sale that do not include a call in a foreign port.” The statement was originally published in a TravelPulse article, but has since appeared elsewhere.

Cruise Critic published a followup article with the following statement from U.S. Department of Homeland Security’s Customs and Border Protection

“U.S. Customs and Border Protection consistently enforces immigration laws and regulations in accordance with the Immigration and Nationality Act (INA). As explained in a 2014 federal court opinion (Bimini Superfast v. Winkowksi), it has been the longstanding position of CBP that D-1 visa holders are not eligible to serve as crew members on cruises to nowhere.

Cruise Critic broke this down into layman’s terms: the only way for cruises to nowhere to continue would be for the cruise lines to hire an entirely American crew for each ship doing a cruise to nowhere voyage. Otherwise, each short sailing would have to include at least one foreign port call before the ship would be allowed to return to the U.S. with crewmembers who aren’t American citizens or lawful permanent residents authorized to work in the United States.

Another article from TravelPulse provided even more details and pointed to a 2014 federal court opinion (Bimini SuperFast v. Winkowksi). Essentially, the change has to do with crew visas and holding all cruise ships to the same standards. The article also mentioned this includes preview cruises such as pre-inaugural ones for new ships, as two-night cruises-to-nowhere are often used to introduce the ship to travel agents and travel writers.

There is still a little more than five months for cruises to nowhere to sail from U.S. homeports. Disney Cruise Line has a couple of these sailings left on the schedule this fall. Following the Disney Wonder’s summer season in Alaska, she will reposition to San Diego for 3- and 5-Night Baja cruises. In addition Disney will offer two 2-Night Weekend Getaway Cruises on October 9th and October 16th.