On Friday, more construction walls came down to reveal the other side of central plaza viewing area at Walt Disney World’s Magic Kingdom. Earlier in the week I grabbed a FastPass+ for Wishes in order to experience the show from the new viewing area. I have not experienced the Wishes in the park in quite some time and figured this would be a good night to go out and take some pictures.

Walking down Main Street USA you cannot help but notice the spacious new hub area. So far, the biggest change to the hub area is the addition of two viewing areas that feature synthetic grass. The fake grass is soft and will hold up really well with the afternoon rain in the summer months. Previously, this area was well, water. These areas are located in front of Casey’s Corner and Plaza Ice Cream Parlor. 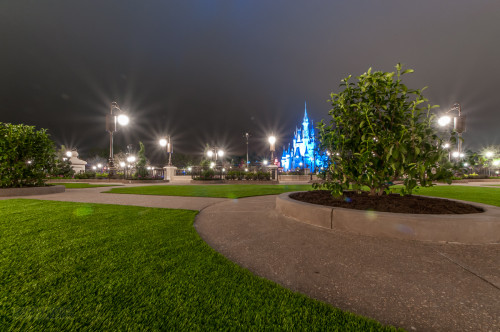 Moving closer to Cinderella Castle, just in front of each viewing area are fountains featuring the return of the character statues that once surrounded the Partners Statue, which is still behind construction walls as the construction phase has moved on to the core of the hub.

On the side of the Plaza Ice Cream Parlor you will find Dumbo & Timothy Q Mouse, Pinocchio & Jimmy Cricket, Pluto, and Minnie Mouse. The fountain on the other side includes Donald Duck, Chip and Dale, Goofy, and Br’er Rabbit. 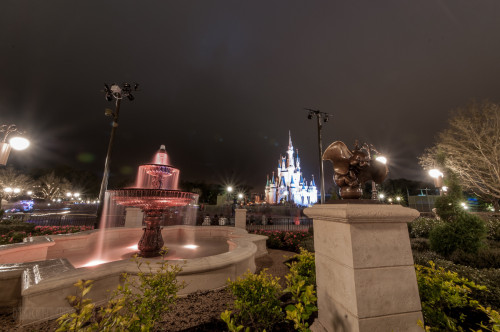 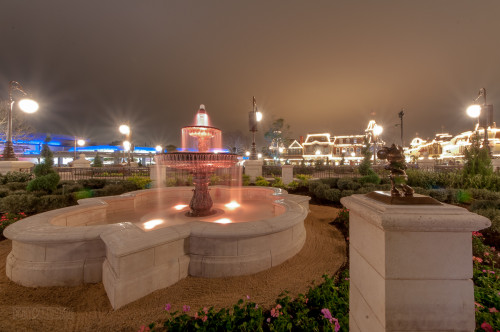 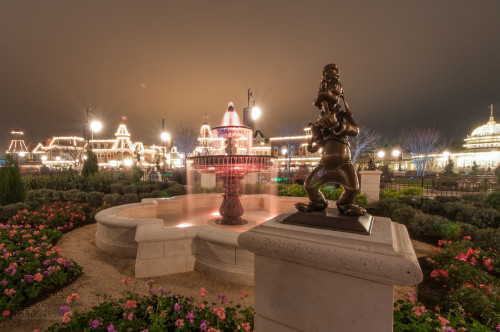 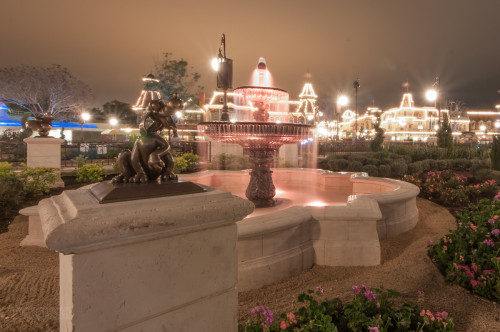 I’ve always enjoyed the character statues and I am thrilled they found a new home in Magic Kingdom’s new central plaza. 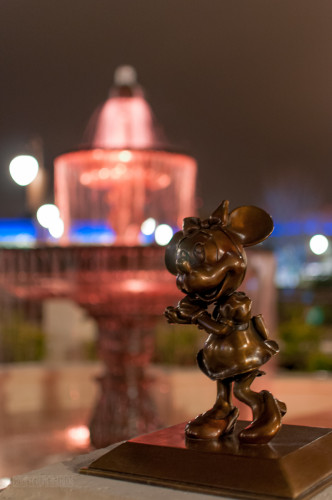 Pluto now has an endless supply of water! 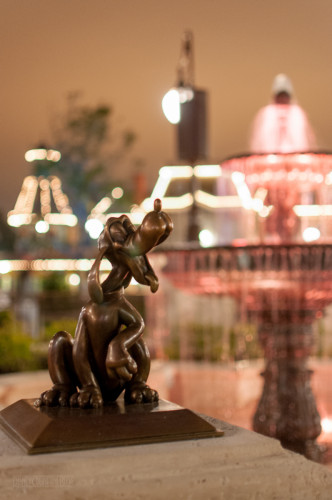 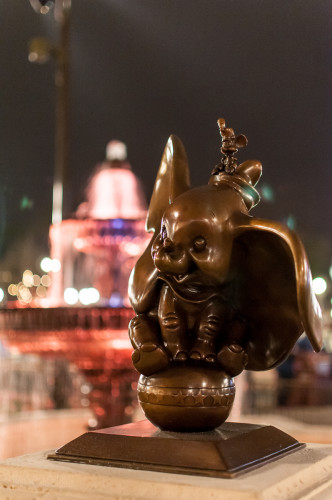 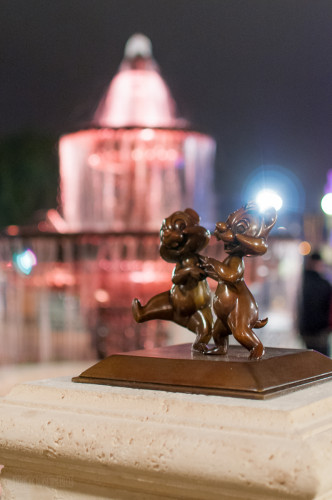 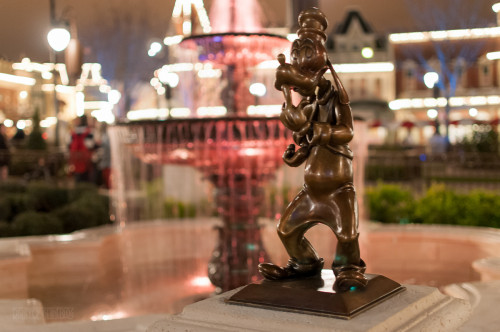 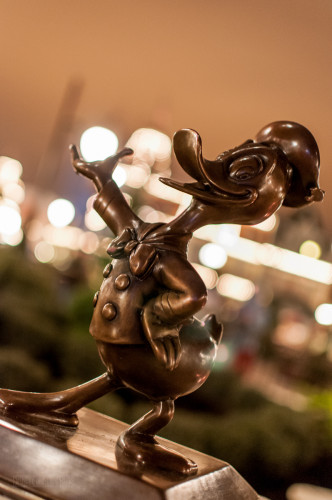 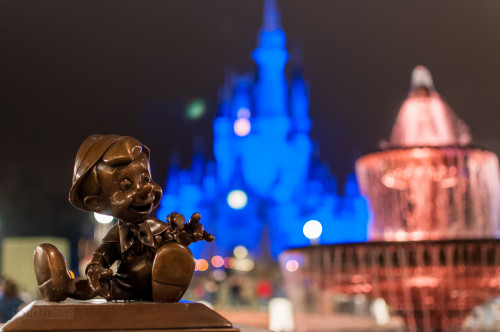 I mentioned earlier that I booked a FP+ for Wishes, but after walking around the new hub area, I decided to hang out with Pinocchio for the evening as I am really digging the fountains. 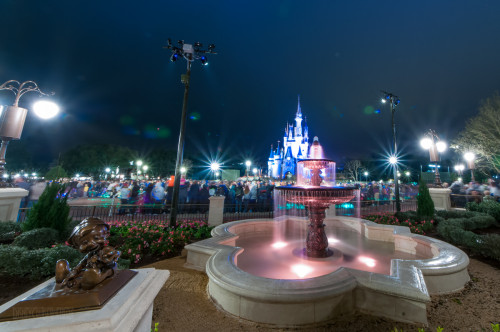 This spot was not ideal for the Main Street Electrical Parade, but it would say it is good enough especially if you ware planning to stick around for the projection show and Wishes. The area along the fountains filled up by the time Celebrate the Magic started. 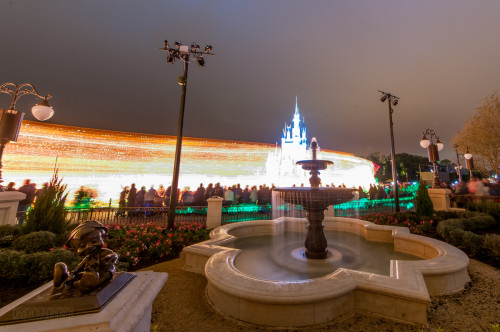 I really chose to skip the FP+ viewing area because I wanted to photograph Wishes with the new fountain. Honestly, I am a bit rusty shooting fireworks, but here we go anyway. 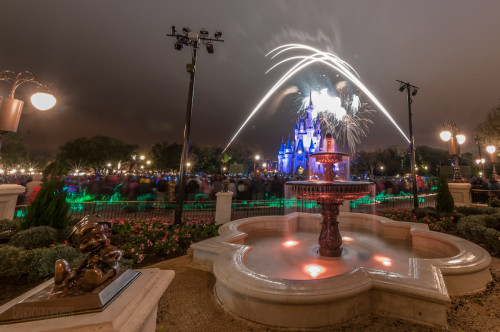 The one thing I noticed is that the fountain lights are also turned off when the other lights are lowered for the parade, projection show and fireworks. Personally, I wish they would remain on. The lights are subtle enough to not be distracting and it would make for a much better photos. 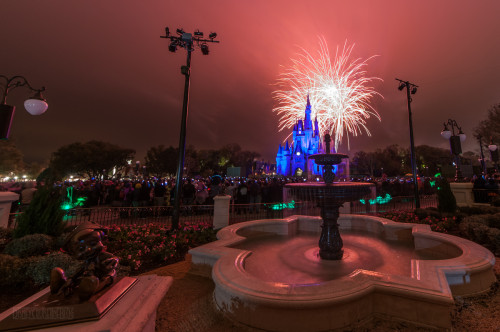 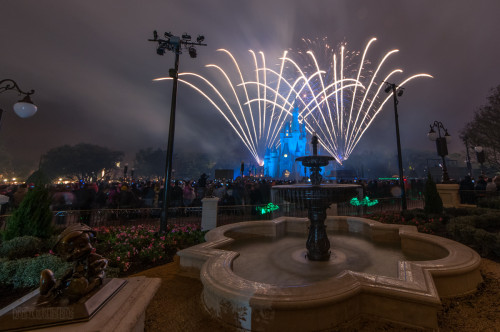 Like I said, I was a bit rusty and left the shutter open way too long during the finale of Wishes. However, I sort of dig the white out effect. 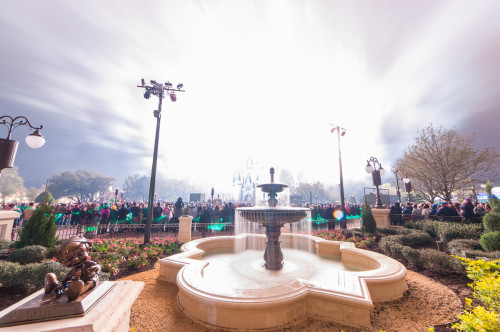 Overall, I really like the changes to the hub. I think that once the Central Plaza area is finished it will look even better. Already, the area in front of the castle looks so much larger and should make for a better viewing experience on busier nights.

The video below is the project concept art fly-over video from when the project was first announced.