Late last week, Disney Cruise Line published their Q4 – 2014 Voluntary Crime Allegation disclosure report for the period October 1 – December 31, 2014. During this period there multiple allegations between crew members disclosed, as well as one between a passenger and crew member. During the quarter DCL estimated there were 230,000 passengers and a daily complement of 5000 crew members. According to the report, the allegations were reported to the appropriate law enforcement and government authorities. According to the voluntary report published, to the best of Disney Cruise Line’s knowledge, no charges have been filed in any of the alleged incidents. 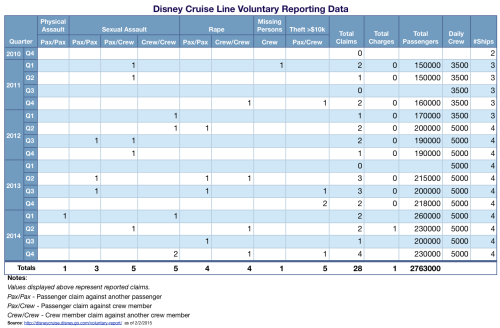 Passenger totals rebounded the in the 4th quarter following two consecutive quarters with a decrease of 30,000 passengers.