Forbes recently shared a very interesting article what they call Bob Iger’s empire of tech at The Walt Disney Company. When the article turned to MagicBands, it was reaffirmed that plans are in the works to bring the RFID bracelets to Disney Cruise Line for wider use. Sure, this is not really new information as this has been expected from the onset, especially considering the vast number of people choosing to spend extra time at Walt Disney World in conjunction with a Disney Cruise from nearby Port Canaveral. Not to mention, Royal Caribbean recently introduced WOWbands earlier this year, beating Disney at their own game.

Theoretically, MagicBands would increase the efficiency of the cruise check in process, as guests staying at one the Walt Disney World resorts could use the same MagicBand they are already using in the theme parks and elsewhere around their resort for checking in at Port Canaveral, as well as onboard anywhere the current KTTW cards are used.

MagicBands were first introduced aboard the Disney Magic, following her re-imagination in late 2013, as Youth Activives Oceaneer Bands replacing the Mickey Bands. During the early part of 2014 the Oceaneer Bands were rolled out across the fleet.

Recently, Ethan over at MagicBandCollectors.com emailed to share a blue Disney Cruise Line MagicBand. The blue version is similar to the 2014 MagicBand featuring a saluting Captain Mickey, but does not include the year. 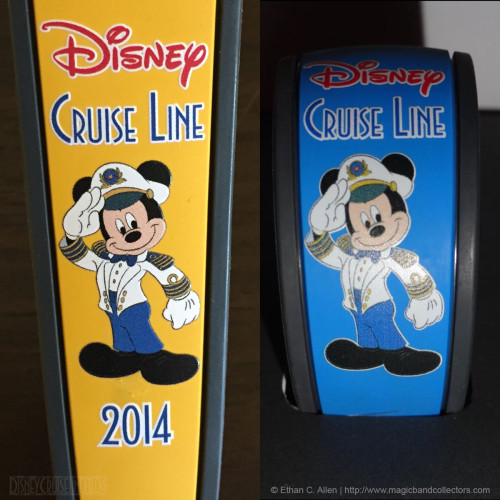 11 Replies to “MagicBand Roll Out on the Horizon”