Friends of the Earth released their 2014 Cruise Report Card which compares the environmental footprint of 16 major cruise lines and 167 cruise ships. The Friends of the Earth report card grades cruise lines on four criteria: sewage treatment technology; whether ships can plug into shore-based power and if they use cleaner fuel than required by U.S. and international law; compliance with Alaska’s water quality regulations to protect the state’s coast; and transparency which is a new criteria this year.

It should be noted, that Disney Cruise Line did respond the Friends of the Earth inquiry in 2013, based on the wording in the copy of the 2014 information request we were provided to review.

Disney Cruise Line was ranked as the most environmentally responsible cruise line, earning an A for sewage treatment. Its overall grade would have remained an A if it would have responded to the information request from FOE. The F in transparency dropped DCL’s overall grade to a C+. Disney Cruise Line does have an Environmental Fact Sheet available for download. The PDF was last updated in late July 2014. Below are the sections referencing Disney Cruise Line’s water purification measures including their onboard wastewater purification system as well as a snippet regarding fuel efficiency and shore power..

Since water is a precious natural resource, Disney Cruise Line has invested in technology to ensure water purity and taken steps to select earth-friendly cleaners. 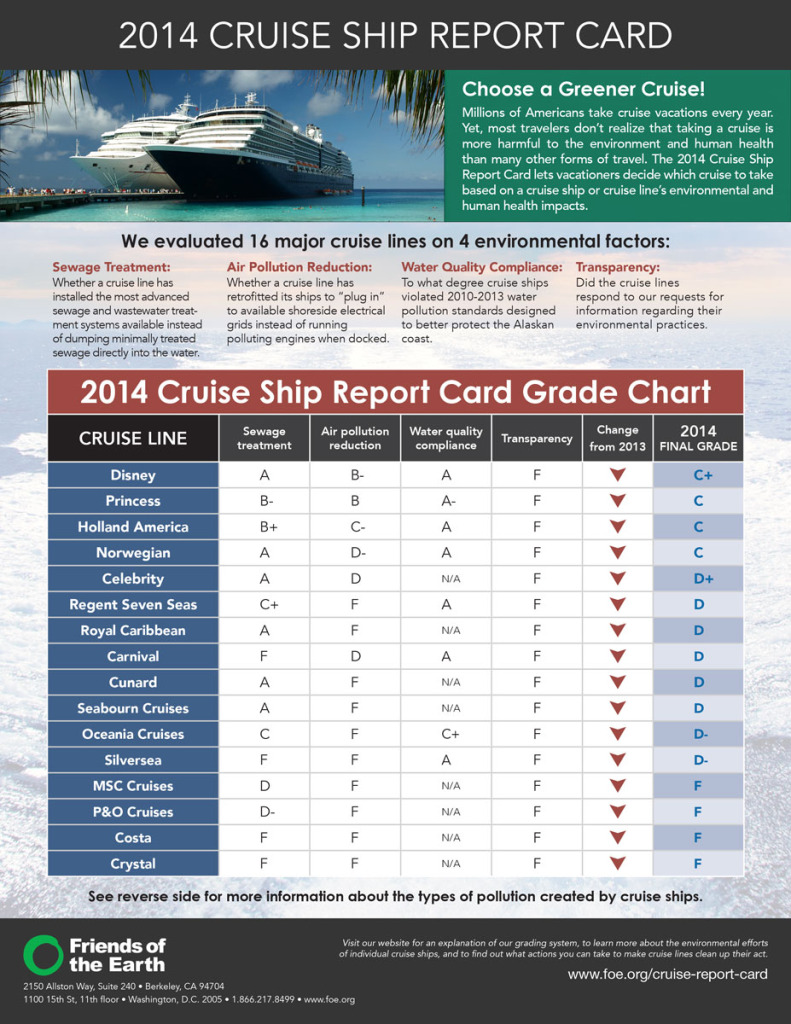 The following are the grades for each of the Disney Cruise Line ships.  The grades for 2014 were the same as last year’s grades. According to a representative from Friends of the Earth the grades for each ship were the same as last year because Friends of the Earth assumed that the ships still have the technology installed under the Sewage Treatment and Air Pollution Reduction parameters. The transparency grade is not a factor in the individual ship grades.

To read more about how the other cruise lines measured up and your other favorite cruise ships, click over to the full 2014 Friends of the Earth Cruise Ship report card.