Disney Theme Park Merchandise provided a preview of a new Disney trading pin that will be released in May and June across the Disney Cruise Line fleet including a few commemorative pins for sailings aboard the Disney Magic and Disney Wonder. The release dates listed below are from Disney, however, they do not necessary match the sailing dates of the specific itineraries. For this reason, I am including the release date listed by Disney and the corresponding first sailing.

Celebrate your Disney Cruise to Alaska with this limited edition pin. This pin features four color printing and color enamel fill elements. The design matches the other merchandise offered exclusively on this summer’s Alaskan voyages aboard the Disney Wonder beginning May 24th with an all new 9-night sailing which includes first ever call in Sitka. The pin release date listed indicates it was released on the Disney Wonder during the Westbound Panama Canal cruise while in Cartagena, Columbia. 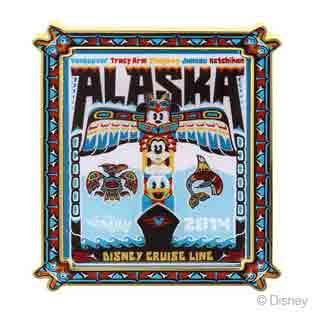 Celebrate your Disney Cruise sailing the Mediterranean with this limited edition pin. This pin features pin-on-pin, stained glass, and translucent fill elements. The design matches the other merchandise offered exclusively on this summer’s Mediterranean voyages aboard the Disney Magic beginning May 31st from Barcelona, Spain. The release date listed matches up with the start of the Eastbound Transatlantic Cruise. 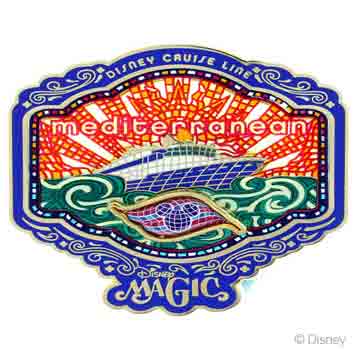 Celebrate your Disney Cruise to the Greek Isles with this limited edition pin featuring Mickey Mouse with pin-on-pin and 3D sculpted metal elements. The design matches the other merchandise offered exclusively on this summer’s Greek Isles sailings aboard the Disney Magic. The release date falls in line with the 9-night sailing from Venice, but the prior sailing which is a one way cruise from Barcelona to Venice includes a stop in the Greek Isles port of Corfu so keep an eye out in the event this pin is available earlier. 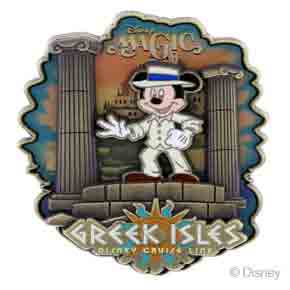 Duck in-Fly Out! This all new open edition pin features the lovable Donald Duck flying out of the AquaDuck. The pin features a marbleized fill and a sliding element. The description from Disney indicates this pin will be released on all of the ships, but the AquaDuck is only on the Disney Dream and Disney Fantasy so keep this in mind in the event it is not available on the classic ships. 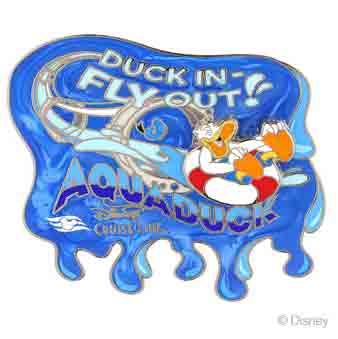 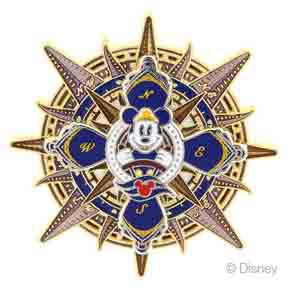 The Disney Cruise Line Tinker Bell catching zzzz’s on the high seas pin features the fairy resting on the captain’s hat. This pin features a translucent fill element and will be released across the fleet in June.

My favorite design is the Mediterranean cruise pin. Which pin design is your favorite?