Earlier this summer, we brought you news that Venice was seeking to ban cruise ship traffic in and around the historic city.  Based on a report published by Reuters, Italy will immediately begin to limit large cruise ships in the the Venice lagoon. On November 1, 2014 cruise ships exceeding 96,000 gross tonnes will be banned entirely from crossing the Giudecca canal.  According to an article from Gazetta del Sud, a new alternate access channel will be developed via the Contorta Sant’Angelo Canal for the larger cruise ships to make berth at the main terminal.

Beginning in January 2014, cruise ship traffic of vessels exceeding 40,000 gross tonnes will be permitted to sail, but overall traffic will be reduced by 20% 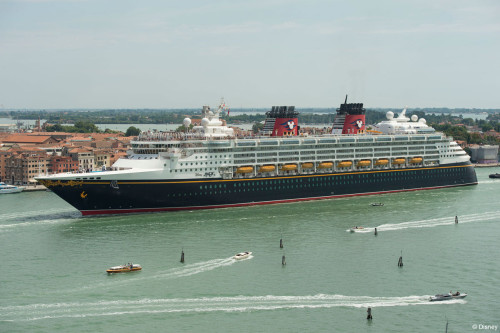 There were a few proposals on the table with the front runner in September being an outright ban that would have moved all cruise traffic to nearby Marghera. An outright ban would have impacted several of the Disney Magic’s scheduled sailings in 2014 in which she will use Venice as a home port for select sailings.  Regardless, the Disney Magic even with her new ducktail is under the limit at 84,000 gross tonnes and would still be permitted to sail into Venice.

The Disney Magic will use Venice as a homeport for two 9-night Mediterranean cruises, followed by a 12-night cruise repositioning back to Barcelona.

5 Replies to “Venice Announces a Limit to Cruise Ship Traffic and Bans Vessels over 96,000 Gross Tonnes”