Friends of the Earth released their 2013 Cruise Report Card which compares the environmental footprint of 16 major cruise lines and 162 cruise ships.  For the second consecutive year, Disney Cruise Line earned an A which is an improvement on last year’s A-, and remains the only cruise line to earn an A grade.  The overall average final grade in the 2013 Cruise Ship report card was a C, with only 5 of the 16 lines graded earning better than the average marks.  There were 4 cruise lines that received failing grades of which 3 lines were unchanged from last year.

All of the Disney Cruise Line ships have advanced sewage treatment systems, resulting in a grade of A for the company’s 100 percent sewage treatment score. The air pollution reduction grade is determined only by ships that dock at a port that currently has shoreside power (thereby avoiding burning dirty fuel in port) were considered. In total, 73 percent of Disney’s ships that dock at a port with shoreside power are plug-in capable, giving the company a B- in this category. The Disney Dream and Disney Fantasy are are capable of connecting to shoreside power hookups, but are currently not being sent to ports where shoreside power is offered, so for purposes of determining the air pollution reduction grade, these ships were only given half credit. The Disney Wonder traveled to Alaska in 2011 and 2012 season and received no violations of state water pollution standards, giving Disney a 100% for water quality compliance in Alaska. 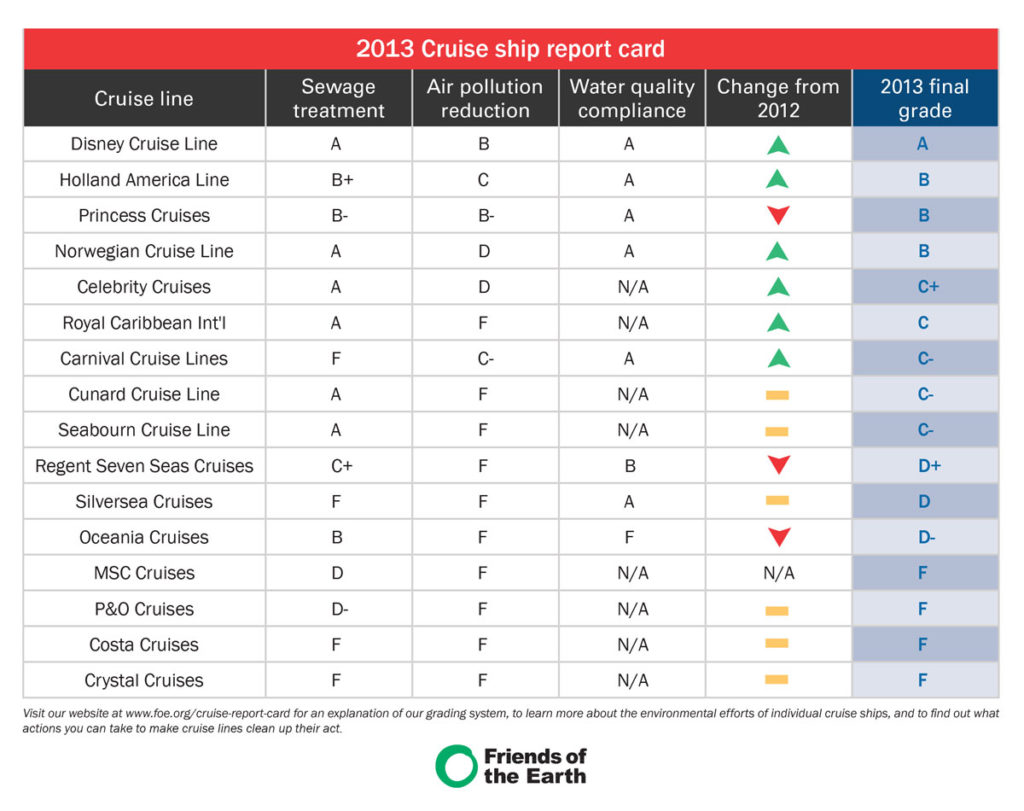 Disney continues to find ways to improve their air pollution reduction grade year after year going from a F in 2010 to a B this year.  This was also the first year Friends of the Earth graded DCL with regard to their water quality compliance in Alaska which is based on the degree a cruise ship violated the 2010, 2011, and 2012 water pollution standards.  These standards are designed to better protect the Alaskan coast and are based on notices of violation issued to each cruise line by the Alaska Department of Environmental Conservation for individual cruise ships.

The following are the grades for each of the Disney Cruise Line ships.  As you can see the Disney Magic was deemed unsatisfactory in the air pollution reduction category.

For the most part the fleet received the same grades as last year except for the Disney Wonder which received an A in Water Quality Compliance bumping her final grade from a B+ to an A. (Individual grades for 2010 are being researched.  The chart will be updated when and if they become available.)

It should be interesting to see how the Disney Magic scores next year coming off her major overhaul.  To read more about how the other cruise lines measured up and your other favorite cruise ships click over to the full 2013 Friends of the Earth Cruise Ship report card.